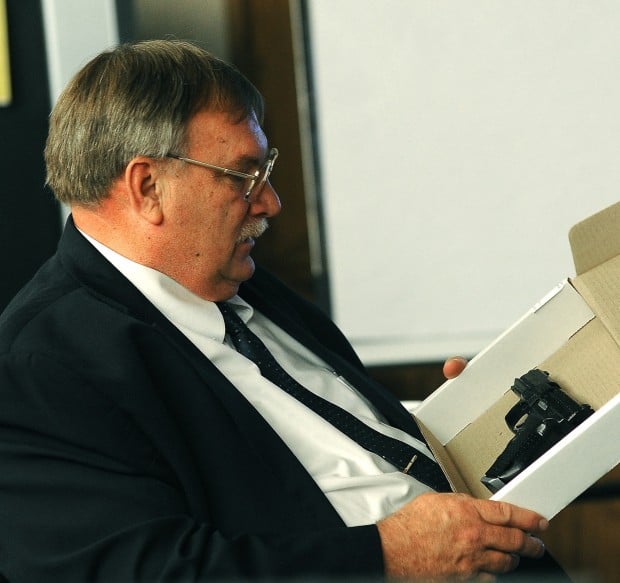 Billings Police Detective Blake Richardson examines a BB gun made to look like a real Walther P99 handgun. The firearm is evidence in the shooting of Jason Shaw by Officer Grant Morrison in February during a coroner's inquest Tuesday morning at the Yellowstone County Detention Facility. 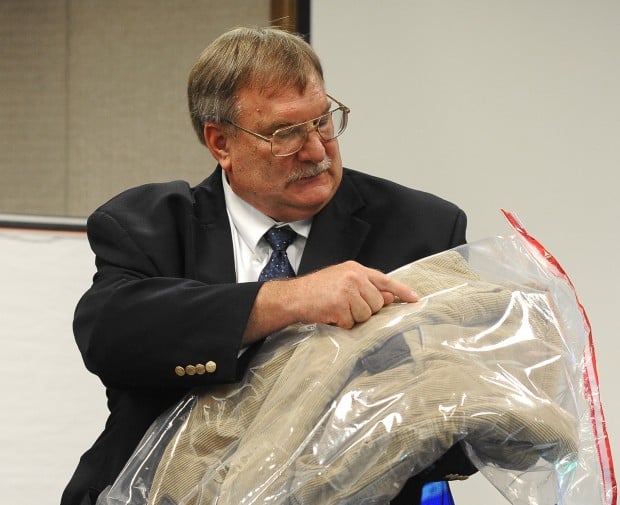 Billings police detective Blake Richardson shows Taser probes in a coat worn by Jason Shaw, evidence from the shooting of Shaw by Officer Grant Morrison in February during a coroner's inquest Tuesday. 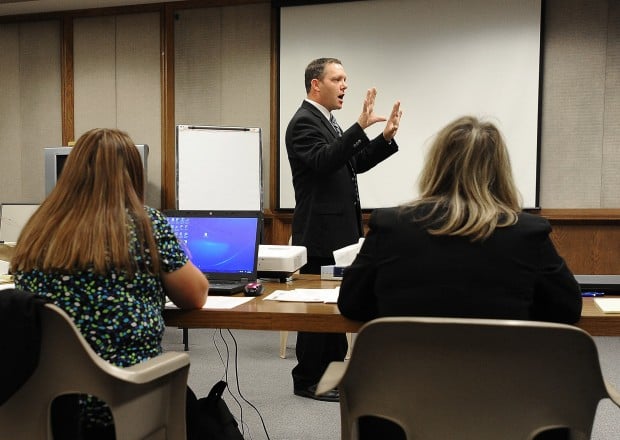 A jury has decided that Billings Police Officer Grant Morrison was justified in the Feb. 11 shooting death of Jason Shaw.

Jason James Shaw had a "crazed look on his face" during a cold encounter with Billings police officers in February, one of the officers told a coroner's inquest jury Tuesday.

Sgt. Shawn Finnegan said he was standing next to Officer Grant Morrison at about 1:25 a.m. on Feb. 11 as both officers shouted at Shaw to get on the ground. The officers had their handguns drawn and pointed at the man.

"I know you have a gun!" Finnegan said Morrison shouted at Shaw. "I will shoot you!"

As the encounter grew more heated and Shaw continued to ignore commands, Morrison shot Shaw with a Taser. But the man's thick winter coat rendered the stun gun useless.

As soon as Morrison fired the Taser, Finnegan said, he saw Shaw reach toward his waist. Finnegan then heard a single gunshot.

The entire encounter lasted about 45 seconds, Deputy County Attorney Ed Zink told the coroner's inquest jury at the start of the two-day proceeding.

Shaw, 32, died a short time later at the St. Vincent Healthcare emergency room. Dr. Thomas Bennett, a forensic pathologist who performed the autopsy on Shaw, told the inquest jury the man died of internal bleeding from being shot in the abdomen.

Bennett also told the seven-member jury panel that Shaw had a potentially lethal dose of methamphetamine in his body when he died.

The jury is expected to begin deliberations Wednesday morning after hearing from two final witnesses, including Morrison. Big Horn County Coroner Terry Bullis is presiding over the hearing at the Yellowstone County Detention Facility.

A coroner's inquest is required under state law whenever an officer is involved in a death. The jury provides an advisory verdict to the county attorney about whether the death was justified or a criminal act.

Zink described during the inquest how the fatal encounter began when Morrison saw a car with several people inside. The car had stopped in front of a suspected Custer Avenue drug house with its lights on.

A records check showed there were valid arrest warrants for the registered owner of the car.

A video from Morrison's patrol car was also played for the jury Tuesday.

Morrison waited to approach the car until Finnegan arrived and had stopped a short distance away.

Morrison turned on a large spotlight, and the officers could see three people inside the car. The driver's seat was empty.

Morrison walked up to the car, Finnegan told the jury, and began talking to a female passenger in the rear seat. Finnegan got out of his patrol car and stood behind Morrison.

Something caused Morrison to suddenly move around the back of the car toward the passenger side, Finnegan said.

That's when Finnegan said he saw Shaw get out of the car's rear passenger side door with a "crazed look on his face."

After the failed attempt to subdue Shaw with the Taser and then the gunshot, Finnegan said Shaw continued to refuse commands to get on the ground.

Eventually, Shaw went down and Finnegan was able to get handcuffs on the man and call for medical aid.

One of the responding officers, Gearold McComb, said he began searching Shaw for injuries and found a handgun in the man's coat pocket.

The weapon turned out to be a BB gun replica of a Walther P99 handgun.

"If someone pulled that gun on you and pointed it you while you were on duty, what would you do?" Zink asked Finnegan while showing the jury the replica firearm.

"I would shoot them," Finnegan responded.

Billings Police Detective Blake Richardson examines a BB gun made to look like a real Walther P99 handgun. The firearm is evidence in the shooting of Jason Shaw by Officer Grant Morrison in February during a coroner's inquest Tuesday morning at the Yellowstone County Detention Facility.

Billings police detective Blake Richardson shows Taser probes in a coat worn by Jason Shaw, evidence from the shooting of Shaw by Officer Grant Morrison in February during a coroner's inquest Tuesday. 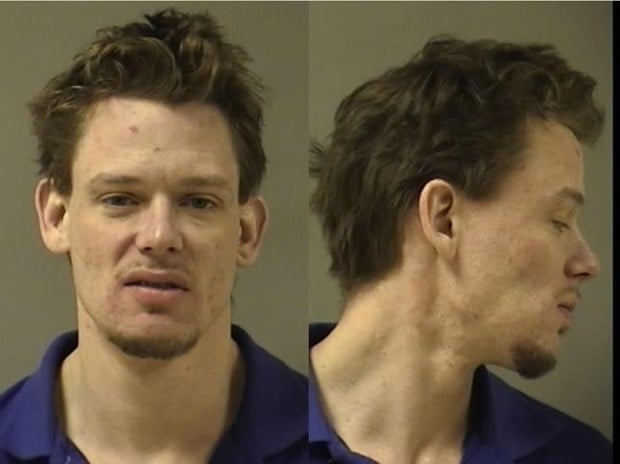