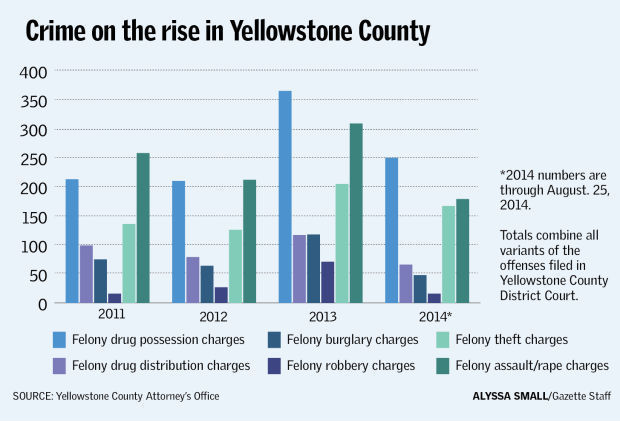 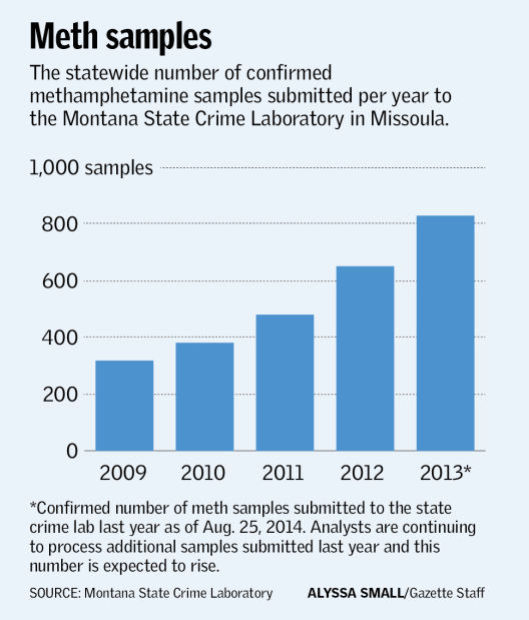 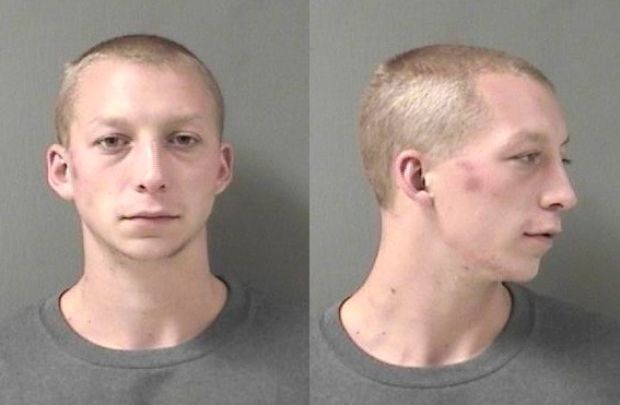 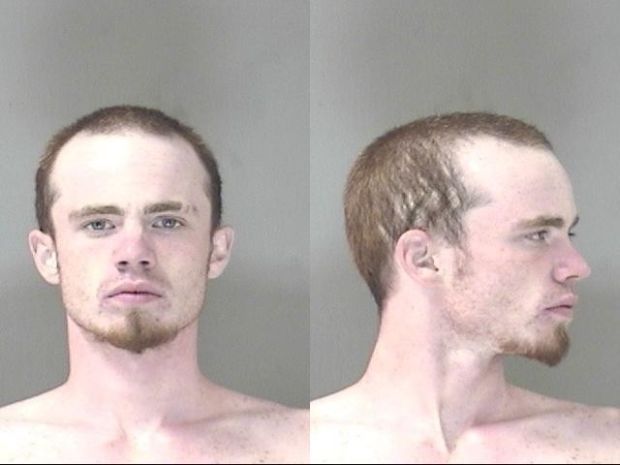 Billings police arrested Jesse Robert Hill, 18, on suspicion of DUI and drug possession after searching the car he was driving during a traffic stop on Main Street on Aug. 25, 2014, and finding suspected methamphetamine. 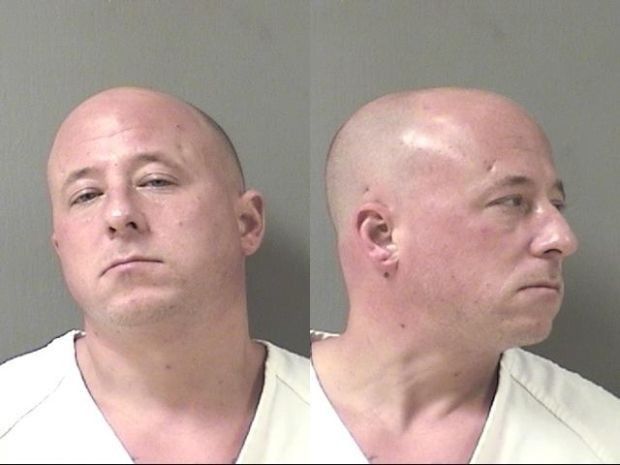 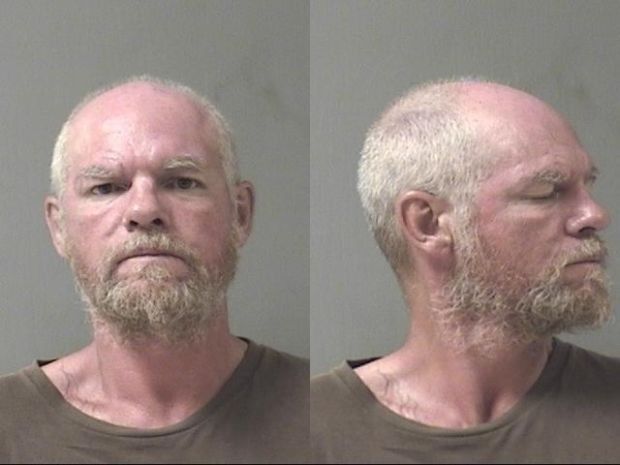 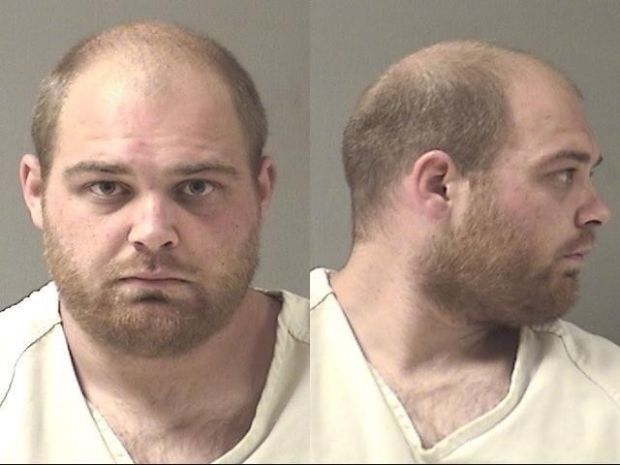 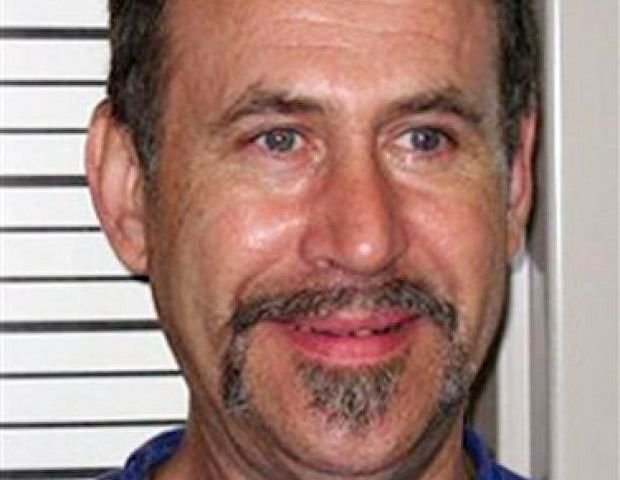 On Aug. 29, U.S. District Judge Susan P. Watters sentenced 50-year-old Robert "Dr. Bob" Farrell Armstrong to 20 years in prison for his role as the leader of a meth distribution ring that stretched from Washington through Billings and into North Dakota.

Frank stopped the driver, Jesse Robert Hill, at about 2:10 p.m. on Aug. 28 because the car, a white Monte Carlo, appeared to have a modified temporary license tag.

After getting a warrant, a search of the car turned up a marijuana pipe — and two plastic sugar-packet-sized bags, one of which had about a quarter gram of little white crystals.

Officer Seth Foster dumped some of the crystals in a small container called a NIK kit, a field test for methamphetamine. The liquids combined with the white crystals and the mixture turned bright blue — indicating the presence of meth.

More meth use in Billings

Finding a quarter gram of methamphetamine in a car may not seem noteworthy — Hill was arrested on possible charges of DUI and possession — but it’s part of a trend: more meth use in Billings, which fuels other kinds of crimes.

“I truly do think it’s the No. 1 threat to public safety in our community,” Yellowstone County Attorney Scott Twito said.

Of those charges, more than half were for meth, Twito estimates.

And meth appears to have been involved in several recent high-profile crimes.

Zachariah James Wiseman, Kelly Dee Megard and Justin Wesley Delacruz, men charged in three unrelated homicide or attempted homicide cases in June and July, were either high on meth or had meth in their possession at the times of the alleged offenses, according to investigators.

The county attorney said he doesn’t yet have enough data to say meth is driving up the number of violent crimes, “but I can certainly tell you more often then not … it is involved in violent crimes.”

And he’s working to track whether

there is a connection. About two months ago, his office started tracking whether meth is a factor in all felony cases presented for prosecution.

Sgt. Shawn Finnegan, a 16-year veteran of the Billings Police Department, said meth addicts often break into cars and homes looking for property they can pawn for cash or trade directly to dealers.

Those kinds of crimes are on the rise, according to Finnegan and other officers in the patrol division of the department. They would know — they’re on the front lines.

Methamphetamine makes people irrational and unpredictable, Officer Todd Clyatt said, recounting a recent incident at North Park when a man who appeared to be high on meth pointed what appeared to be a handgun at him.

At about 7:30 a.m. on July 27, a Sunday, Clyatt was on patrol when he saw two people at the center of North Park. He went to investigate after seeing open alcohol containers and trash near the pair.

One of the two, later identified as 28-year-old Bryon James Hemming, started running away while holding a large, silver pistol, court records say.

Clyatt yelled for Hemming to stop, but the man continued running. He used his patrol car to cut Hemming off and radioed for backup. As Clyatt approached, Hemming turned and pointed the pistol at him, charging documents state.

Hemming eventually dropped the gun, but continued running, records say. Police chased him on foot, and he turned and took a combative stance. He was taken to the ground, but continued to resist arrest even after being shocked with a Taser.

A detention officer later reported finding a smashed glass pipe in Hemming’s pocket. He claimed it was broken bottle of cologne, but the broken glass tested positive for methamphetamine.

The firearm, a BB gun, was retrieved and appeared to be an exact replica of a stainless steel Beretta 92 pistol, court records say.

“It looked very real to me,” Clyatt said. “You know, we almost shot him. He was tweaked out on meth — paranoid. That was absolutely meth influence.”

On the morning of Aug. 18, three marked police cars were parked in front of a motel on the edge of downtown Billings.

Clyatt, Officer Robert Miller and Sgt. Shawn Finnegan had information that people had been using and possibly dealing meth at the motel.

“I can tell you the water pressure is dropping right now because people are flushing stuff,” Clyatt said, as he stood outside the motel.

The secondhand information about meth dealing wasn’t enough to apply for a warrant, which the officers needed to legally be able to enter without permission.

Clyatt decided to do a “knock and talk,” approach with the people in the room and ask for permission to search their room — something the tenants have every right to deny.

Clyatt walked up the worn, squeaky motel steps to the second-story room in question. A handful of people, some smoking cigarettes and others talking on cellphones, were milling around the parking lot below, watching what was happening.

Clyatt politely chatted with a man and woman who were staying in the room with two young children. He talked to them individually for about 10 or 15 minutes each, getting to know them a little, before addressing the reported meth activity.

“I’m not standing here calling you a dope dealer, I’m just telling you that people have gone into that room and come out with methamphetamines,” Clyatt told the man, who admitted to using meth in the past.

The man and woman both denied knowing anything about the reported meth use and eventually agreed to have the room searched.

The search didn’t turn up any meth or related paraphernalia; no arrests were made. But Clyatt seemed OK with that. Before he left, the woman asked for his card and thanked him for his concern for her and her children.

“Talking a lot of times is our best tool,” Clyatt said after walking back to his patrol car. “I know she’ll call.”

The day before, a similar “knock and talk” with a man at the same motel did turn up meth paraphernalia — syringes, a digital scale that appeared to have meth and marijuana residue, a propane torch, two wooden clubs and two glass pipes used to smoke meth.

“They call them lokers on the street,” Finnegan said, looking over the pipes and other items with Clyatt.

Lokers are made by heating glass containers, often empty cigar cases, and blowing the enclosed end of the container into a bulb and poking a small hole in it.

Finding a propane torch in a hotel room is always a red flag. “What are you going to use that for in a hotel room? Smoking meth,” he said, adding that “chronic” meth users often have burn marks on their fingers.

“This is just universal; everywhere you go you’re gonna get stuff like this,” he said, looking at the two wooden clubs. “And they don’t hesitate to lump the crap out of each other on a regular basis.”

“It’s like a whole underground world of drug dealing in our community,” Finnegan said.

Meth, 'the No. 1 threat to public safety'

A collection of photos relating to the growth of meth use in Billings over the past 12-18 months.

A look at the effects of meth use in Billings

Law enforcement officials and treatment providers are seeing an increase in meth use, a spec…

Meth dream: A vivid dream in which a user or recovering addict dreams about using the meth. The dreams can be so lucid that when people wake up they won’t know if they’ve used or not.

Needles: Syringes, often ones designed for diabetics to inject insulin, used to inject methamphetamine intravenously after it has been heated and turned to liquid.

Stepping on it: Mixing a meth lookalike with methamphetamine to make more of the drug, allowing dealers to sell more product.

Crank: Old-school, locally made meth, which has almost exclusively been replaced by mass-produced, high-purity meth cooked in Mexico.

Fighting the business of meth distribution

There’s a lot of money to be made in meth dealing, and law enforcement officials say business appears to be booming in Billings.