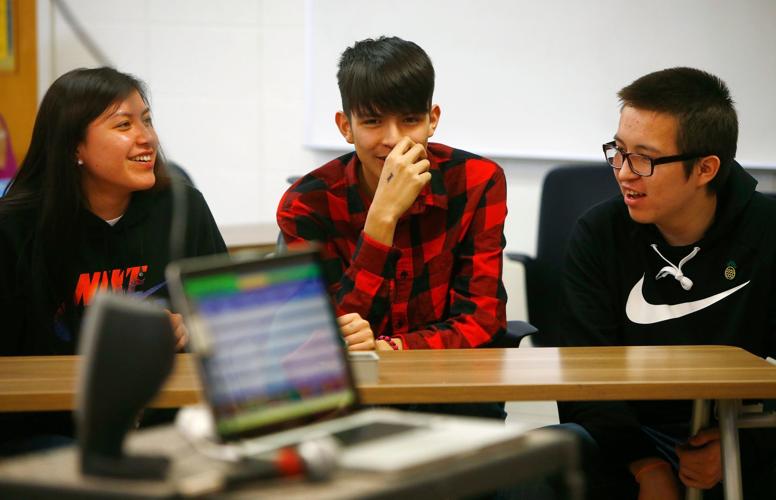 Students discuss a team response to a question during the Apsáalooke Language and Culture Bowl at MSU Billings on Saturday. 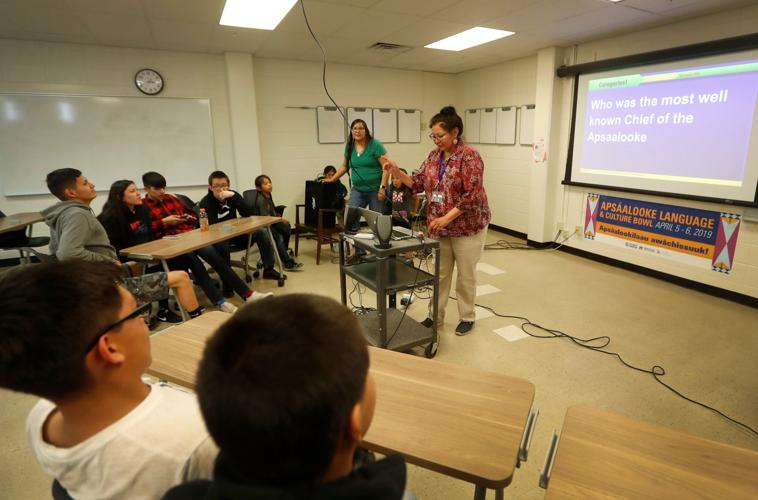 Students compete in the Apsáalooke Language and Culture Bowl at MSU Billings on Saturday. 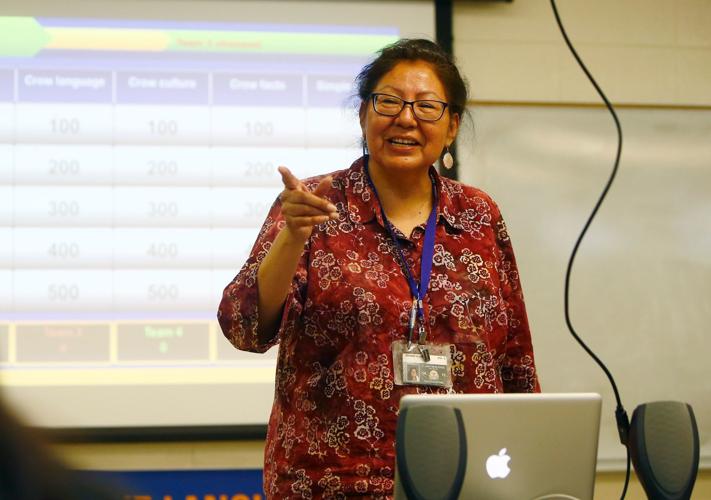 Roanne Hill, the Crow language instructor at St. Labre Indian School, calls on a team to answer during the Apsáalooke Language & Culture Bowl at MSU Billings on Saturday.

While the Alterowitz Gym was alive with spectators, dancers, drummers, singers, music and happy chatter during the 51st Annual MSUB Powwow, a group of people sat in the basement floor of the building with something else on their minds.

The group was putting on the 2019 Apsáalooke Language and Culture Bowl, focused on sharing ideas and methods on fortifying and conserving the Crow language. Many of the speakers were educators, language teachers, or board members of the Crow Language Consortium, a non-profit collective of Crow schools and educators working to preserve the Crow language.

The Crow language is one of many endangered Native American languages in North America, and the population of fluent speakers keeps diminishing.

The Crow Language Consortium is working to change that. They’ve updated curricula that haven’t been touched since the 60s and 70s, and made those materials modern and accessible to all. That includes an app for your phone, level 1-3 textbooks and audio CDs that go with the textbooks. There are also level 1-3 flashcards available. And they’re working on publishing a complete dictionary of the Crow language.

This past summer the Crow Language Consortium, along with the Language Conservancy, a non-profit working to save endangered indigenous languages around the world, worked to make a 15,000 word Crow dictionary.

They did that in just two weeks, using a rapid word collection method. Fluent speakers gathered for two weeks, and worked every day to create lists of words and the coordinating English words in one of 1,700 categories or topics. The consortium hopes the dictionary will be completed within the next year and include 20,000 Crow words.

"The dictionary is just one building block you'll need, but it's a critical one," Wil Meya said. "People can use the dictionary with confidence to learn the language, and feel confident that this is the right word. And has been produced using the best methods and materials, and give you confidence as the learner."

Meya, a board member of the consortium, and CEO and chairman of The Language Conservancy, said the rapid word collection workshop was the largest in North America, to the best of his knowledge.

"It's for reasons like that, with over 40 elders that assisted in (the creation of the dictionary), is why I feel like the Crow language has perhaps the best chance of survival in North America," he said. "I don't say that lightly, you have real depth to your language and a strong and committed speaker group, and you're willing to work together to get there.

"This is about the future of the language," Meya said.

No one knows for sure how many fluent speakers there are, because there hasn’t been a formal census said Father Randolph Graczyk, author of “A Grammar of Crow," and pastor of the Saint Charles Parish. Graczyk also speaks Crow fluently.

Estimates range from 1,500 speakers to as low as 300 fluent speakers. That’s of the 14,000 registered tribal members.

One of the worries with the endangered language is that most fluent speakers 30 and older.

Below the age of 30, there are only around 25 identified people who are able to speak Crow conversationally or fluently, estimates Roanne Hill. Hill is a Crow Studies teacher at St. Labre Indian School, a board member of the Crow Language Consortium, and organizer of the summit and language bowl.

Young people aren’t learning the language, and future generations won’t have the skills to pass the language onto their children. Getting youths involved is the key, she said.

That’s why they’re focusing and emphasizing on bringing the Crow language to students.

On Saturday, Hill made sure to include students at the summit with the language bowl, during the latter half of the event.

Janice Wilson, an Wyola Elementary Teacher, sung and demonstrated some Crow lullabies. She's also working to record them, and is creating videos with sign language that goes along with the songs.

Regular efforts to get younger Crow students speaking the language include immersion or dual-immersion classes for preschool and up, and a language requirement in most of the Tribal high schools.

Velma Pease teaches an immersion course at St. Charles Mission School. She teaches preschool through first grade and has seen the improvement in her student’s language abilities.

“With these classes, I think so. Cause as we as Crow teachers, are speaking Crow, teaching (students) Crow,” said Velma Pease. “I think there is an interest from students.”

Immersing students is one way to help them succeed in learning.

“I know for me I just want to do my little part to keep the language going. To survive,” she said. Her students who are enrolled in immersion classes do better in school and on tests she said. And, most of her students can read and write fluently in both English and Crow, she said.

But just hearing Crow at school is not enough, she thinks. She encourages her students to speak to their parents or grandparents outside of school.

And in the summer, when they aren’t in school she wants to make sure kids are still actively listening and speaking Crow.

Luckily students can flex their language muscles during the summer with the Crow Summer Institute put on by  the Crow Language Consortium, The Language Conservancy and Little Big Horn College. The Crow Summer Institute is a three week long program in its 9th year. It's for learners of Crow and for Crow language educators, more effective ways to teach the language. Organizers urge everyone to sign up. This year it's from June 3 to June 21 at the Little Big Horn College campus in Crow Agency. The program is free.

You can register for the three-week program here. For more information on the phone apps, materials and textbooks and where to get them you can go here.

Crow women gather to practice language, saying 'our language is our identity'

There is no word for “goodbye” in the Crow language. Rather, in Apsalooke, it’s “shia-nuk" (see you later).

There’s no magic formula to creating a school rooted in Native American languages.

Fourth-grader Nayola Lion Shows pokes at the surface of an iPad as the Crow language echoes around her.

A pro-levy effort kicked off Wednesday in Billings. The levy would raise taxes to provide new school materials like textbooks and create career counseling positions in the public high schools.

A new Crow language app launched in mid-November, offering convenient access to a wealth of knowledge.

Students discuss a team response to a question during the Apsáalooke Language and Culture Bowl at MSU Billings on Saturday.

Students compete in the Apsáalooke Language and Culture Bowl at MSU Billings on Saturday.

Roanne Hill, the Crow language instructor at St. Labre Indian School, calls on a team to answer during the Apsáalooke Language & Culture Bowl at MSU Billings on Saturday.