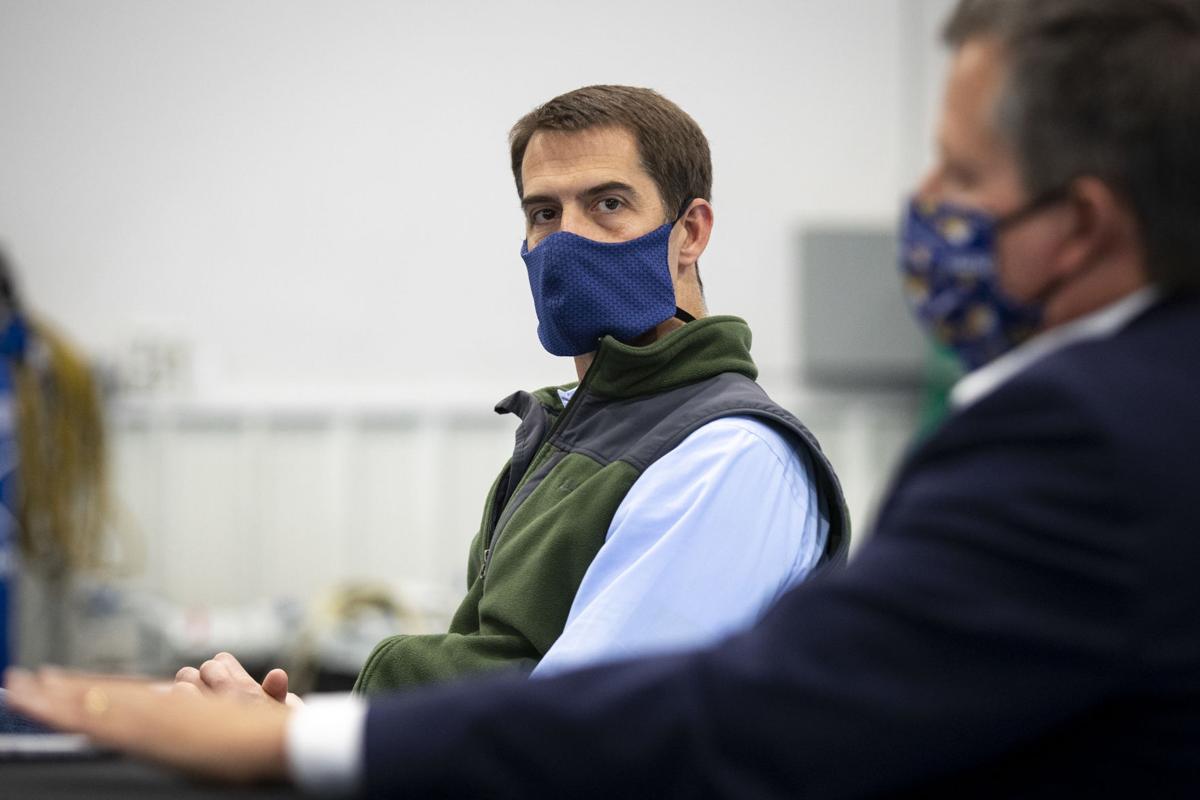 Arkansas Senator Tom Cotton listens as Senator Steve Daines talks during a meeting between the senators and the creators of the Montana Mask at Billings Flying Service in Billings on Thursday, Oct. 8, 2020. 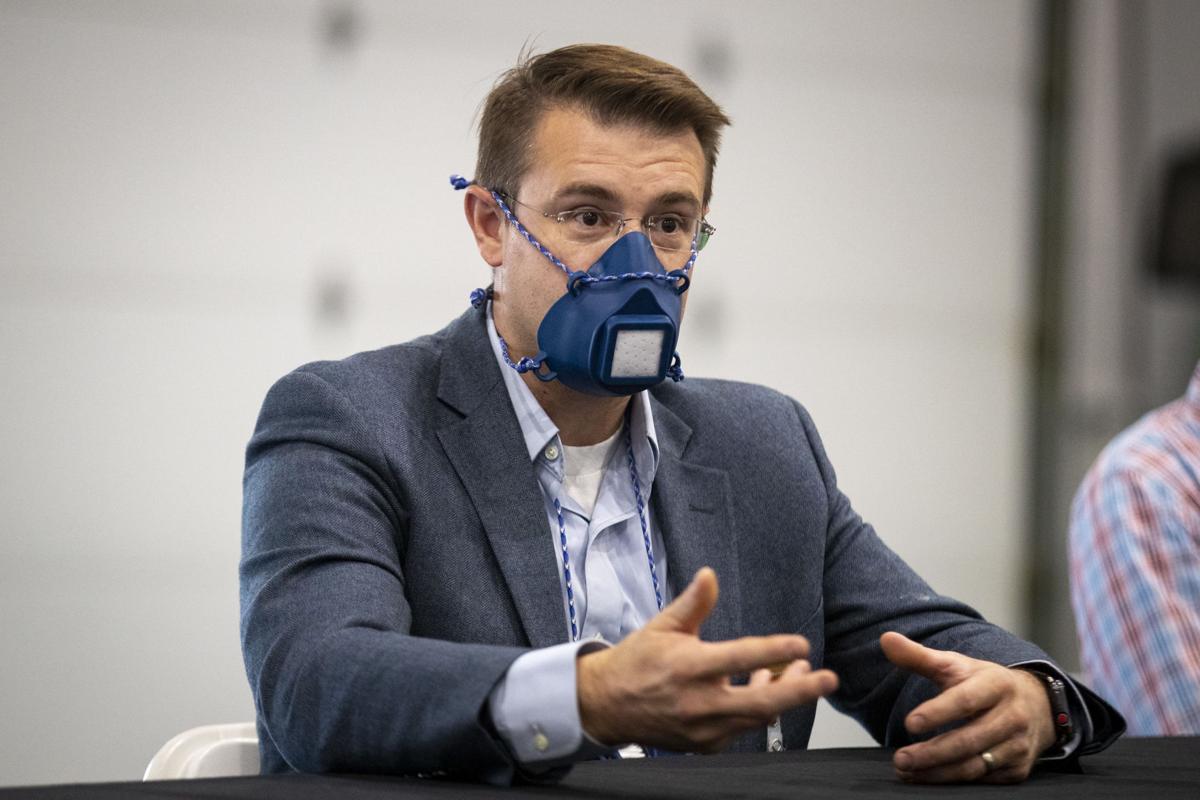 Dr. Dusty Richardson speaks to Senator Steve Daines and Arkansas Senator Tom Cotton during a meeting between the senators and the creators of the Montana Mask at Billings Flying Service in Billings on Thursday, Oct. 8, 2020.

Sen. Steve Daines illuminated the ideological contours of his race with Gov. Steve Bullock by campaigning in Billings on Thursday with Sen. Tom Cotton, R-Ark.

Cotton, who has an elevated national profile built on a fiery and forceful brand of conservatism, spent Thursday afternoon with Daines at the Billings Flying Service hangar meeting the creators of the Montana Mask.

At the start of the pandemic in March, when personal protective equipment — particularly face masks — were in short supply, a Billings dentist, his college graduate son and a neurosurgeon at Billings Clinic designed a plastic, 3-D printed face mask that used a replaceable filter cartridge for protection.

The initial design was drawn up on the back of a receipt from neurosurgeon Dusty Richardson's pocket. Richardson, along with Colton Zaugg and his father, Spencer Zaugg, had been tinkering with various inventions in the Zaugg garage for a few years.

The mask shortage seemed like a tailor-made opportunity for the trio to put their skills to use and help the community.

"When a problem comes up we put our heads together and try to solve it," Spencer Zaugg told Daines and Cotton.

Once the trio had a prototype mask with which they were happy, they posted the code for free online, where it's been downloaded and used in almost 200 countries. Since that time, a number of companies and organizations have gotten involved.

Spark R&D, which designs and produces splitboard bindings and accessories in Bozeman, moved the design from a 3-D printer to injection mold production. Billings Flying Service printed thousands of the masks for School District 2, a move that helped persuade county officials they could hold graduation ceremonies of Billings' three high schools.

Richardson explained some of the challenges they faced — and continue to face. The group is seeking a final OK from the federal National Institute for Occupational Safety and Health, which would give the mask the stamp of approval allowing it to be used by most medical industries.

Daines offered to help the group navigate the bureaucracy to help move the process along.

He offered his full support for Daines and spoke about how well he'd gotten to know the senator over the years, drawing a contrast between the man and the political ads that have sought to cast him in a negative light.

"I feel like he's family," Blaine said. "I'd like to speak to his integrity: it's beyond reproach."

Cotton offered his own support for Daines, calling him a friend.

"He's hardworking, he's diligent," Cotton said. "He gets along with everyone. He's a great voice for Montana."

Spencer Zaugg is an inventor, and he wants to get back to work. That’s a good combo.

'Montana Masks' pop up all over the world, move from 3D printers to injection molds

Injection mold production can use materials that are softer and more flexible than the plastic required by 3D printers.

When Todd Spangler heard about the 3D-printed face mask designed by a trio of Billings inventors he immediately got to work.

Billings high school graduations to be held at MetraPark

The debate is set to air Saturday evening on the Montana Television Network, a day after many counties in the state began mailing ballots to voters.

Sen. Ted Cruz, R-Texas, spent 30 minutes Thursday morning speaking to a group of roughly 75 voters at the Billings Hotel and Convention Center, imploring them to vote for Sen. Steve Daines.

Arkansas Senator Tom Cotton listens as Senator Steve Daines talks during a meeting between the senators and the creators of the Montana Mask at Billings Flying Service in Billings on Thursday, Oct. 8, 2020. 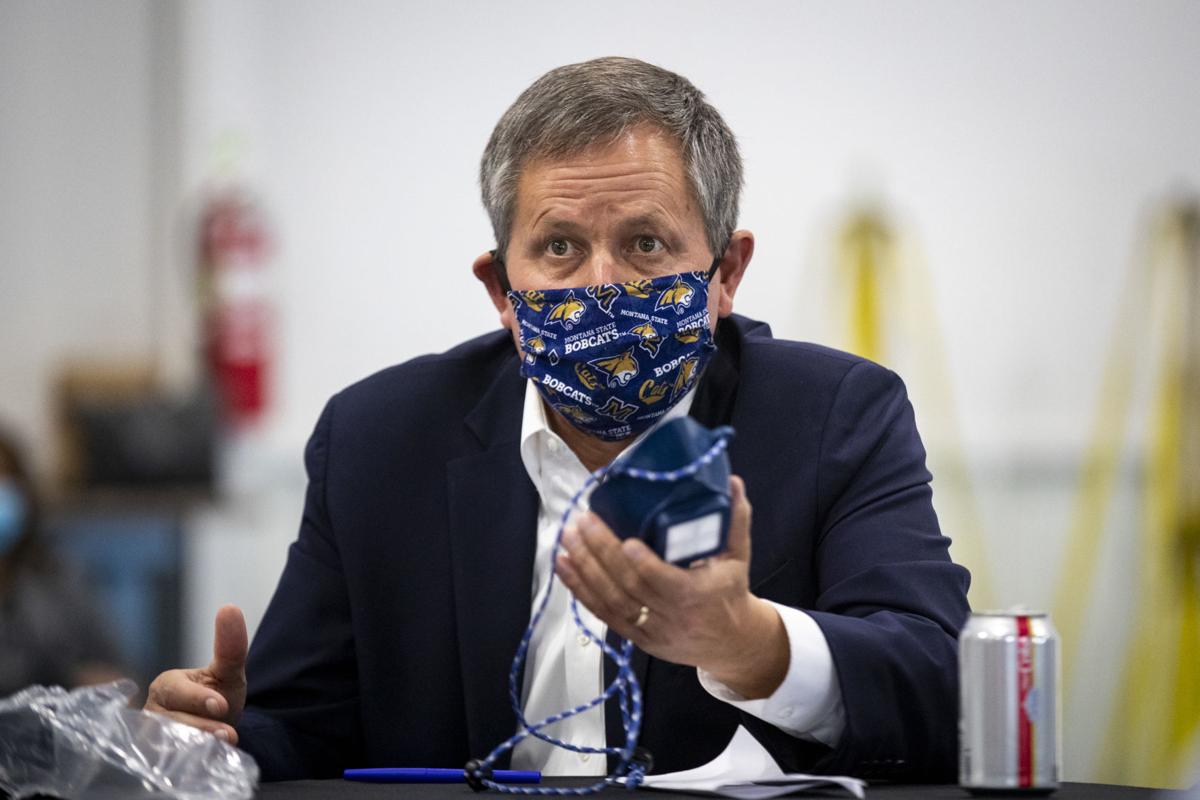 Senator Steve Daines holds a Montana Mask during a meeting between the senator and the creators of the Montana Mask at Billings Flying Service in Billings on Thursday, Oct. 8, 2020.

Dr. Dusty Richardson speaks to Senator Steve Daines and Arkansas Senator Tom Cotton during a meeting between the senators and the creators of the Montana Mask at Billings Flying Service in Billings on Thursday, Oct. 8, 2020. 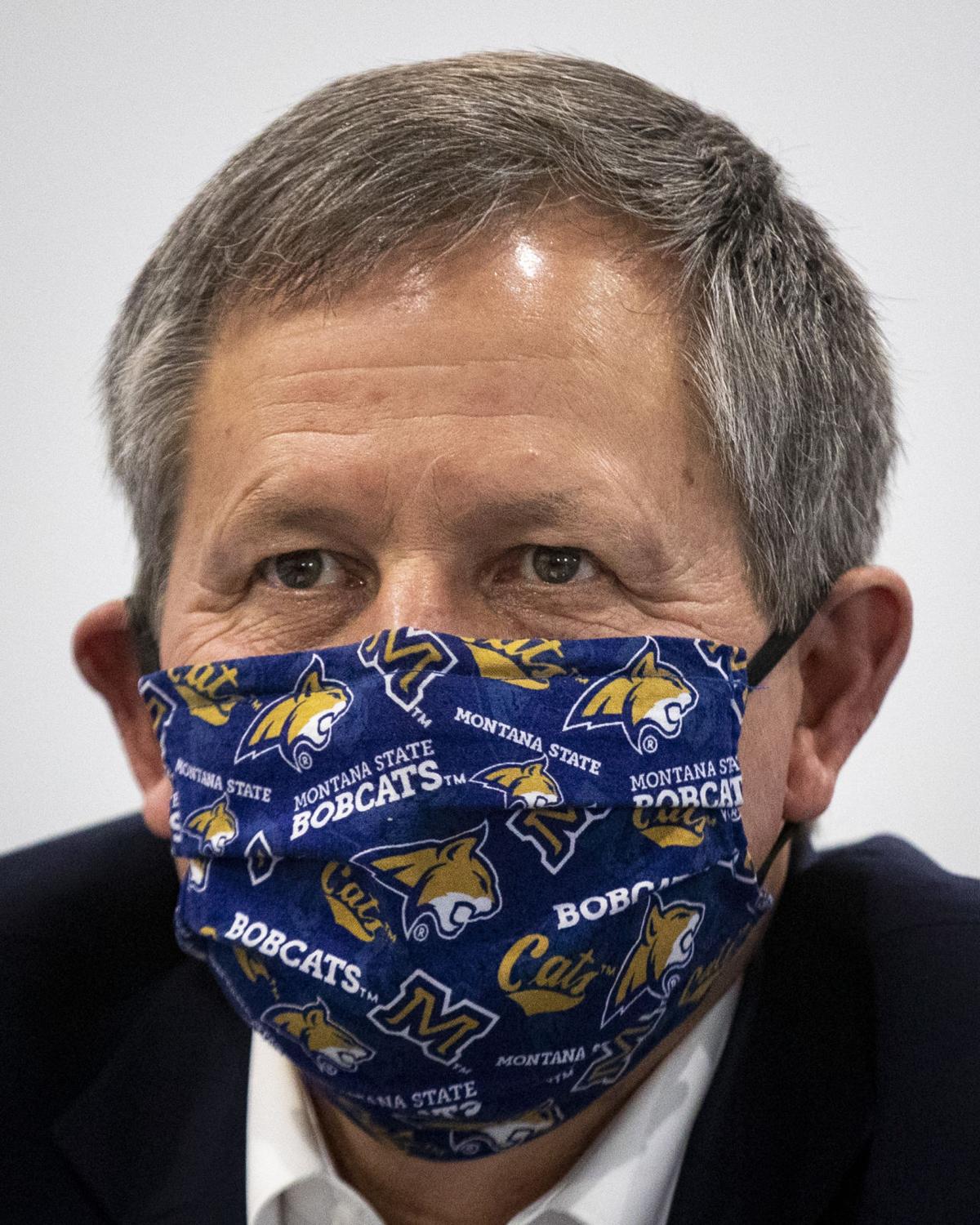