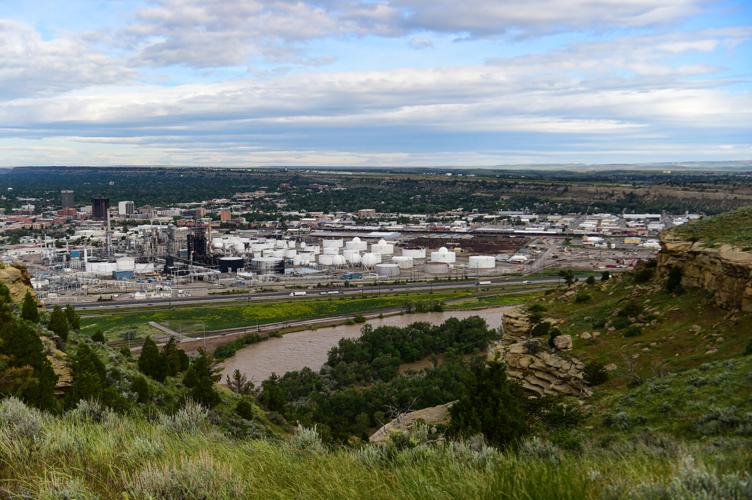 In this file photo from June, 2022, the Yellowstone River can be seen with the Phillips 66 refinery in the background. 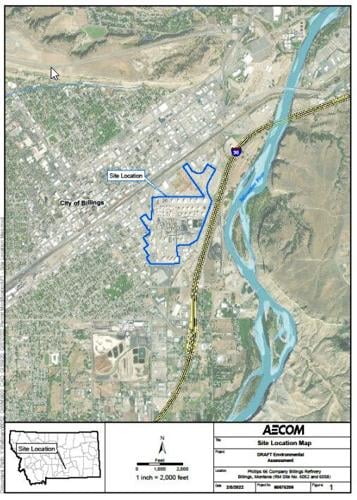 The Phillips 66 refinery is located next to Interstate 90 on the southeast side of Billings.

The Phillips 66 refinery in Billings is asking the Montana Department of Environmental Quality to approve its proposal to use sparging to improve groundwater quality in four contaminated areas.

The refinery is located on about 200 acres on the southeast side of the city.

Sparging is a means of “injecting air, oxygen or other additives (such as ozoneperoxide) into the water table to stimulate the breakdown of contamination by microorganisms,” the DEQ explained in its draft environmental assessment.

To use the technique, the DEQ must sign off on a modification to Phillips 66’s permit. The public can comment on the proposal, or request a public meeting, through Sept. 13. The draft environmental assessment explaining the proposal can be found online.

According to the draft EA, “In 2002, DEQ approved a site-wide soil and groundwater cleanup remedy for the refinery and incorporated the remedy into the hazardous waste permit. The new remedy would include additional areas of contamination at the refinery” on the east and northern boundaries.

Prior to the request to switch to sparging, the company has used a groundwater interceptor system to prevent contaminants from leaving the refinery’s property. “The main hazardous constituents of interest (COIs) in groundwater and soil at the refinery are benzene, toluene, ethylbenzene, xylenes, and vinyl chloride.”

The Yellowstone River is approximately 1,000 feet east of the refinery. Groundwater at the site flows northeast toward the Yellowstone River. About 22 feet under the soil, a layer of Colorado Shale limits the downward flow of water.

The city’s Coulson Park is northeast of the refinery, but according to the DEQ “is not impacted by the off-site groundwater contamination.”

In 2021, 11 monitoring wells at the refinery had measurable or observed liquids – such as oil, gas or diesel fluid – or denser contaminants. The liquid’s thickness ranged from a sheen to about 3 feet, the draft EA stated.

“Vinyl chloride in groundwater at the Phillips 66 refinery is generally caused by the breakdown of trichloroethene (TCE) … Vinyl chloride does not degrade easily under anaerobic conditions. The sparge technologies, included in the Proposed Action, create more aerobic conditions in the subsurface that increase degradation of the vinyl chloride plume,” according to the DEQ.

“Arsenic is found at the refinery from refinery contamination, natural occurring amounts in soil, and potentially from historical insecticide use.

“The Proposed Action would have minor positive impacts to water quality, by reducing the level of contamination,” the draft EA said, yet added: “Improvements to onsite groundwater would result in improved groundwater quality off-site.”

“No negative impacts to the river from the refinery’s groundwater contamination have been documented,” according to DEQ. “However, improved groundwater quality may have a negligible minor positive effect on terrestrial, avian and aquatic life and habitats in the Yellowstone River.”

Likewise, the DEQ noted that despite the installation of new equipment and use of different technology, “The implementation of the proposed remedy would have minor positive impacts on soil quality.”

The refinery has been working to clean up the contamination since the 1990s, using a variety of techniques which have “shown success at reducing the extent and magnitude of groundwater contamination.”

DEQ anticipates the work would “continue throughout the remaining operational life of the refinery because ongoing industrial activities prevent access to all contamination.”

Phillips 66 began its Billings operations in 1949. The refinery converts crude oil and field butane into liquefied petroleum gases, gasoline, jet fuel, diesel fuel, fuel oils and petroleum coke. It is one of three refineries in the Yellowstone Valley. The other two are ExxonMobil in Lockwood and CHS refinery in Laurel.

In this file photo from June, 2022, the Yellowstone River can be seen with the Phillips 66 refinery in the background.

The Phillips 66 refinery is located next to Interstate 90 on the southeast side of Billings.