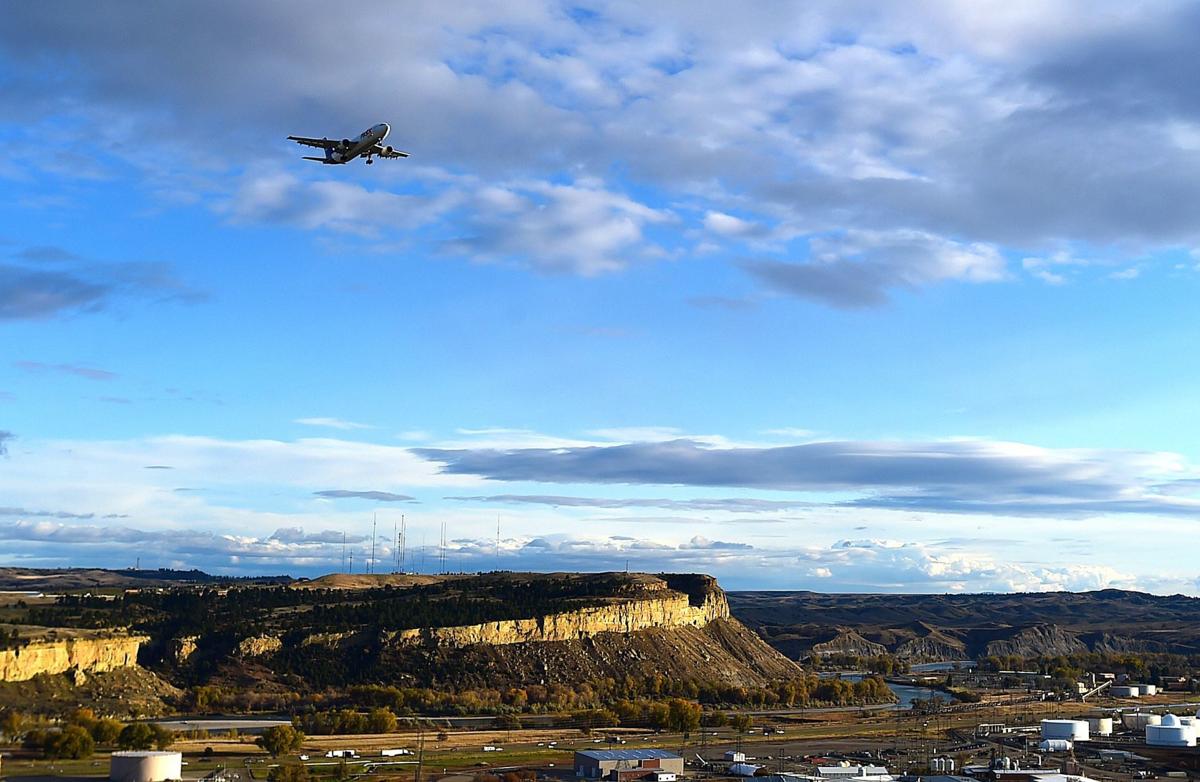 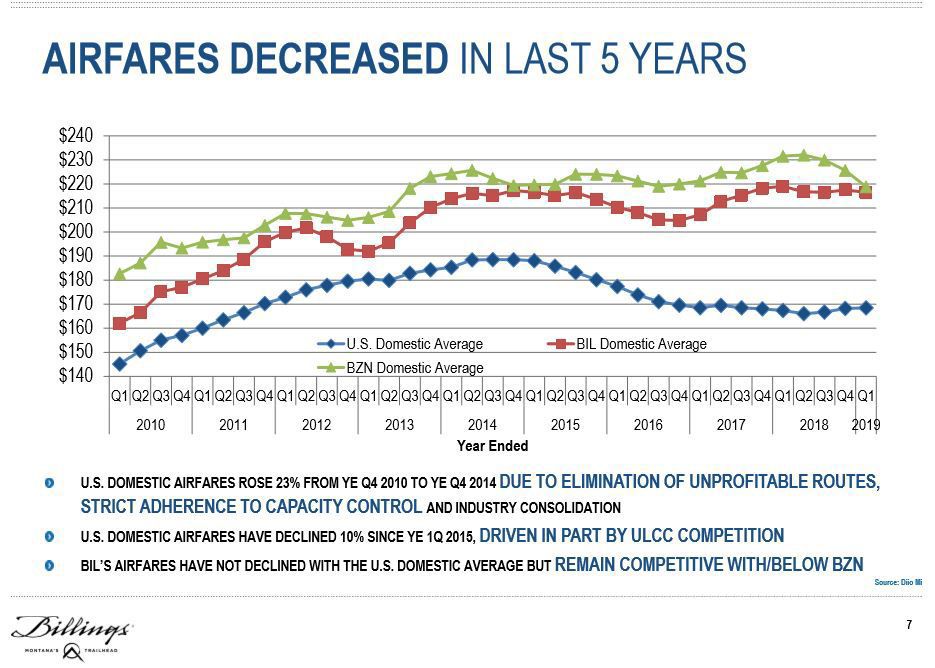 A study by the Billings Chamber of Commerce shows the average airfare for Billings, Bozeman and the nation. 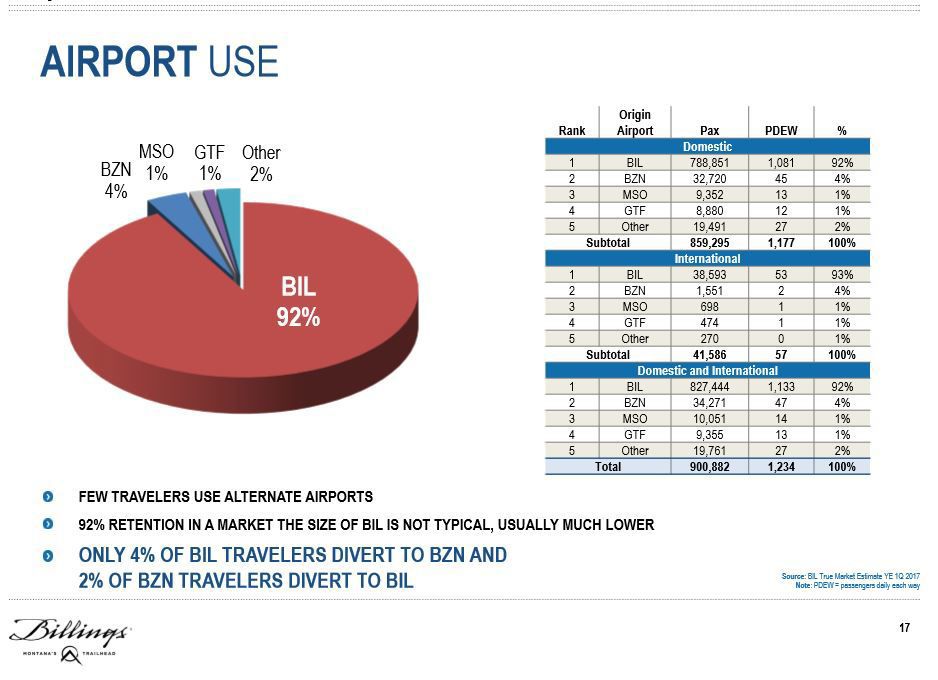 Billings Chamber of Commerce graphic shows the number of Billings residents who fly out of Bozeman.

Billings Logan International Airport, which is usually the second busiest in the state, saw its numbers eclipsed last month by Missoula's airport, a first for both.

"There's a lot of traffic traveling (through western Montana) that time of year," said Kevin Ploehn, the airport director.

Missoula saw 701,000 boardings through the end of September; Billings saw 697,000. Both were behind Bozeman's Yellowstone International Airport with 1.25 million.

"We're going to set another record," he said.

By the end of the year, he anticipates Billings will hit 940,000. He also expects air traffic will slow in Missoula as the summer travel season wraps up and the weather starts to deteriorate.

"By November, December, we'll be back at number two," he said.

The horse race aspect of tracking which airport is the state's busiest has more bearing on each city's ego than it does on the service their airports provide, Ploehn said.

The important metric for Billings is whether the city provides decent air service and if that air service is meeting the needs of the community, he said.

Looking at the airport's growing numbers, Ploehn believes the airport is doing just that.

Billings airport gets ready for its $55M launch into the future

The two-hour road trip for a Billings resident to fly out of Bozeman is often pinned to lower airfares at Yellowstone International Airport. That may be the case for some individual flights, but the average airfare at both airports is the same, according to the chamber.

The majority of travel through the Billings airport is business related, although tourism-related travel is starting to climb with additions like Frontier. It's allowed more Billings residents to travel for recreation, Ploehn said.

Some of that is reflected in the high number of boardings the airport is seeing this year, and Ploehn anticipates that it will continue.

"I think we'll continue to chug along just fine," he said.

Frontier Airlines returning to Billings, will resume flights to Denver

Montana airports will see an uptick in departing passengers in the days leading up to and following the Thanksgiving holiday, adding to the co… 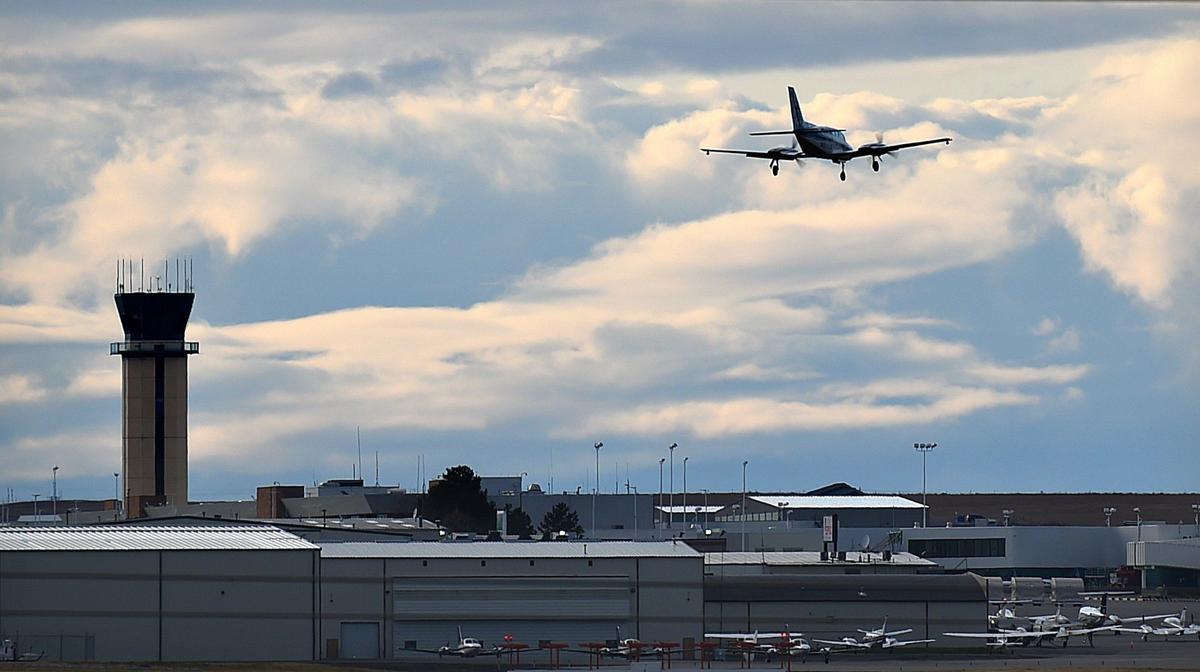 A Cape Air Cessna approaches the Billings airport in October, 2019. The carrier's ridership is up 188% and they’re on-time departures are within the 98% range. The carrier flew just over 46,000 people in 2018.

A study by the Billings Chamber of Commerce shows the average airfare for Billings, Bozeman and the nation.

Billings Chamber of Commerce graphic shows the number of Billings residents who fly out of Bozeman.