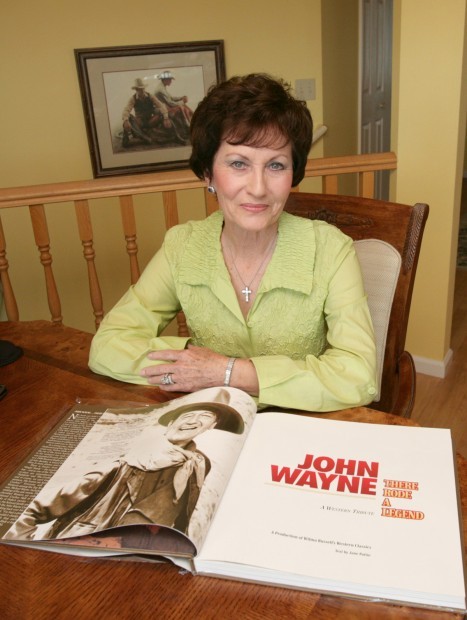 Alice Johnson McKinney, who splits her time between the Billings area and Arizona, knew John Wayne through his friendship with her late husband, Louis Johnson. Their relationship to the legendary Hollywood hero figures prominently in a book, below, on the actor, “John Wayne ... There Rode A Legend.” 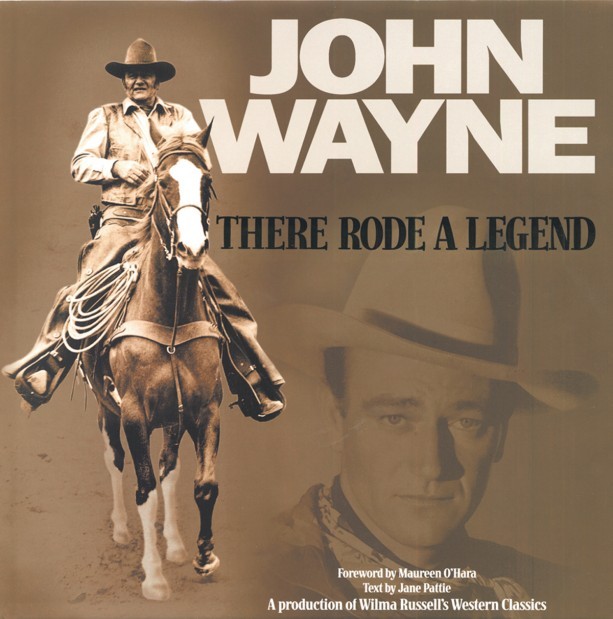 “John Wayne ... There Rode A Legend,” by Jane Pattie, is available at Shipton’s for $49.99. Alice McKinney, whose late husband, Louis Johnson, was Wayne’s business partner in Arizona, holds the copyright on the books. 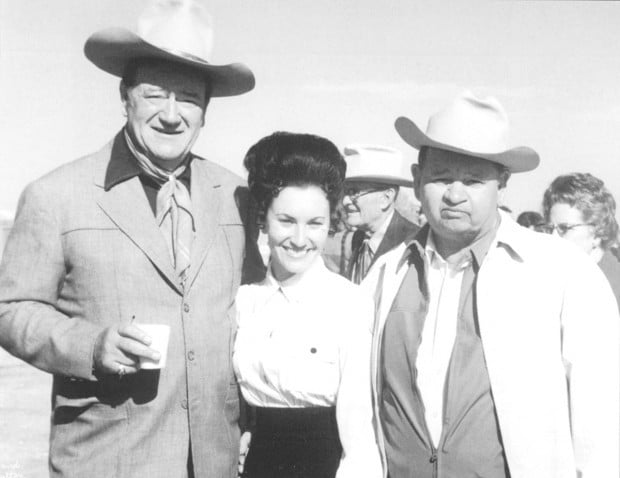 Alice Johnson McKinney stands with Wayne and her late husband, Louis, in a chapter from “John Wayne ... There Rode A Legend.”
DONNA HEALY Of The Gazette Staff

McKinney, who splits her time between the Billings area and Arizona, got to know Wayne well during the later years of his life. She and her late husband honeymooned aboard Wayne’s yacht, visited the legendary actor on movie sets and were in the audience when he received an Academy Award for his performance as the one-eyed Rooster Cogburn in “True Grit.”

The couple’s connection to Wayne figures prominently in a biography, “John Wayne ... There Rode A Legend,” written by Jane Pattie, a book to which McKinney holds the copyright.

Their curious friendship started in 1958, when Wayne borrowed $4 million on the advice of his tax attorney to buy 4,000 acres of prime cotton land.

Wayne knew nothing about raising cotton. Johnson, who owned the neighboring cotton farm, had a reputation as a top grower.

By the end of 1958, Johnson had agreed to manage Wayne’s financially troubled cropland along with his own. In 1960, they became partners on the cotton crop, a partnership that lasted until Wayne’s death in 1979.

In 1964, they started the 26 Bar Ranch, at the edge of the White Mountains in eastern Arizona, a ranch that grew to encompass more than 20,000 acres, plus 30,000 acres of Forest Service leases for summer pasture.

Their operation grew again in 1970, when they bought and expanded the Red River Feed Yard at Stanfield, Ariz. At its peak, the feedlot boasted more than 86,000 head of cattle.

The pair became leading breeders of purebred Herefords. Their annual production bull sale each November, at the barn behind the Johnson’s home west of Stanfield, was a weekend event that Wayne never missed, even if he was in the middle of a movie.

Often, he brought his family and guests. When he came alone, he stayed at the Johnsons’ home.

McKinney, a petite woman who wears the same dress size she wore at age 15, was born in Arkansas and speaks with a noticeable Southern drawl.

“He loved visiting with the ranchers,” she said. “He was a people person, and he loved the ranch people.”

Before each sale, Johnson briefed Wayne on the bloodlines of prized bulls so he could talk knowledgeably with other stockmen.

“They were a good, winning team,” McKinney said. “Duke was pretty gullible in business deals. If you told him he would make 15 percent quick, he would fall for it. Louie would weigh it out.”

People who approached Wayne with business offers were told to pitch them to Johnson. If they could convince Johnson, Wayne would go in on the deal.

As the Johnsons drew the actor into their world, he drew them into his.

Louis and Alice, who were married in 1969, spent their honeymoon on Wayne’s yacht, traveling along the coastline from Canada to Alaska. Like everything about Wayne, the yacht, called the Wild Goose, was larger than life — a 136-foot converted minesweeper.

The Johnsons were guests at the Academy Awards ceremony when Wayne won an Oscar in 1970.

After the awards ceremony and dinner party, they stayed at the Beverly Hills Hotel in villas connected by a courtyard. Elizabeth Taylor and Richard Burton were in a villa a few doors from them. The famous couple’s bickering in the courtyard kept other guests awake, McKinney said.

“Duke wasn’t ready to go to bed, so he’s coming around knocking on our door and wanting to know where his partner is,” McKinney said.

TV host Merv Griffin showed up one year for the bull sale. Comedian Bob Hope had part of a Christmas special shot in the Johnson’s home at Stanfield.

“I’m not easily awed, but, yes, I met lots of movie stars,” she said. “I’m as country as a turnip green, and I’m very comfortable with whoever.”

Katharine Hepburn, who co-starred with Wayne in “Rooster Cogburn,” impressed McKinney the most. They met several times during the movie’s filming on location along Oregon’s Rogue River.

Wayne talked politics with everybody, McKinney said. But Hepburn, who lent her name to a number of liberal social and political causes, could hold her own.

“She was fiery and spunky. He would tease and get at her, but she just came back. She was really quick, and she was a match for him,” McKinney said.

Wayne typically showed up at the Johnsons’ home in Arizona 10 days before a movie. He came to diet.

One day, as she was fixing food for the diet, McKinney announced a new deal. She wanted $100 for every pound that Wayne and her husband lost.

“I collected it, and I built a tennis court out back,” she said.

When Wayne was at home in California, his personal car was a customized Pontiac station wagon. The car was specially built to provide enough headroom for him to wear his Stetson, allowing him to skip wearing his toupee.

One year, Wayne gave the Johnsons an identical Pontiac station wagon as a Christmas gift.

“The reason he did it was so he could use it at the ranch,” McKinney said.

The Pontiac, from the early 1970s, is still parked in the garage at her home in Arizona.

In a photo of Wayne taken near the sale barn in Arizona, the actor carries a package of Redman chewing tobacco. After Wayne lost a lung to cancer in 1964, he quit a five-pack-a-day habit of smoking unfiltered cigarettes.

Against the advice of business associates, Wayne went public about his cancer, appearing in TV spots urging people to schedule checkups.

When Wayne died of stomach cancer on June 11, 1979, Louis Johnson became the sole executor of Wayne’s property in Arizona, property they held as partners. Johnson sold the ranch, 14,000-acre farm and the feed yard in 1980 for $45 million.

Johnson, who chomped on cigars but didn’t smoke, died in December of 2001 after an 11-year battle with cancer of the mouth. In 2003, McKinney married her current husband, Verne, of Billings.

She and her daughter remain involved in a memorial fundraiser for the John Wayne Cancer Foundation. Last November, the Arizona fundraiser, called “Louie and the Duke Classics,” included a golf tournament, auction, team roping and rodeo dance.

Many of the events took place at the Francisco Grande Hotel, near Casa Grande, a hotel that in earlier years was often filled with guests from the annual bull sale.

Since Wayne’s death, the spare bedroom at McKinney’s home, where Wayne stayed on visits, has remained unaltered.

“His pajamas are still in the dresser drawer of his room,” she said.

She has also kept a rolled-up paper scroll filled with signatures from well-wishers done when Wayne was sick with stomach cancer. Unfurled, the scroll is long enough to stretch across a large room. Signatures fill every inch, front and back.

“How can you throw anything like that away?” McKinney asked.

Another tangible reminder of the Hollywood icon hangs in her dining room.

McKinney always collected crystal. At a dinner party in Wayne’s home, soon after she met the actor, she inquired about the antique Baccarat crystal chandelier in Wayne’s dining room.

Wayne told her that he had shopped for it in Europe.

“That shocked me. Because, for John Wayne, to be shopping for crystal chandeliers just didn’t seem right,” she said. “But he had some nice things in his home, and he was a shopper.”

After his death, Wayne’s children gave the chandelier to McKinney as a keepsake.

Alice McKinney, whose late husband, Louis Johnson, was Wayne’s business partner in Arizona, holds the copyright on the books.

Alice Johnson McKinney, who splits her time between the Billings area and Arizona, knew John Wayne through his friendship with her late husband, Louis Johnson. Their relationship to the legendary Hollywood hero figures prominently in a book, below, on the actor, “John Wayne ... There Rode A Legend.”

“John Wayne ... There Rode A Legend,” by Jane Pattie, is available at Shipton’s for $49.99. Alice McKinney, whose late husband, Louis Johnson, was Wayne’s business partner in Arizona, holds the copyright on the books.

Alice Johnson McKinney stands with Wayne and her late husband, Louis, in a chapter from “John Wayne ... There Rode A Legend.”
© Copyright 2021 Billings Gazette, 401 N Broadway Billings, MT | Terms of Use | Privacy Policy
Powered by BLOX Content Management System from TownNews.com.
You don't have any notifications.