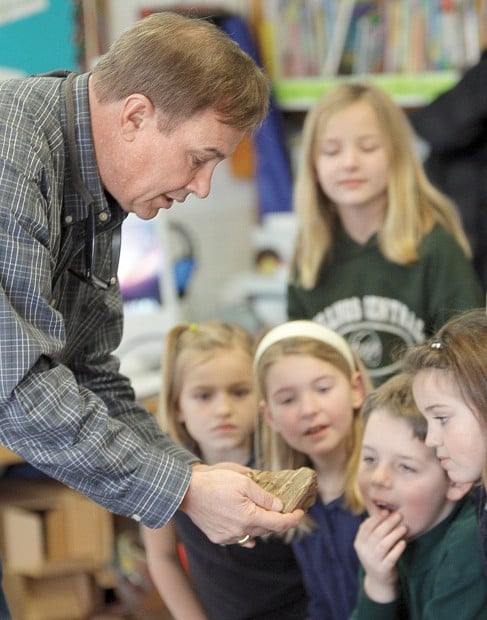 Geologist Mark Bowman shows a rock sample to St. Francis Primary School second-graders Friday. Bowman talked to the kids about geological history, but the variety of rocks he showed off were the biggest hit. BOB ZELLAR/Gazette Staff 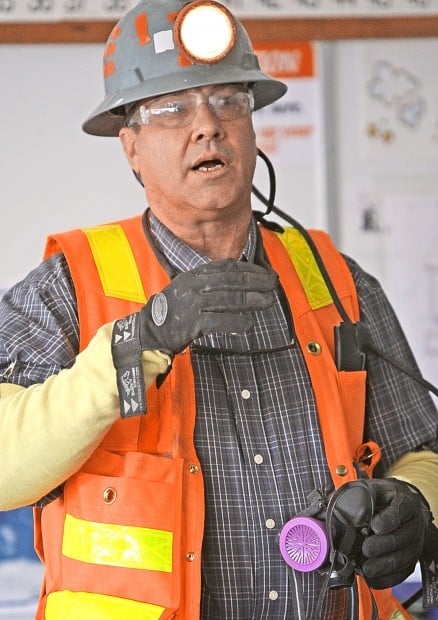 Bowman works at the Stillwater Mine. He showed the kids the gear he wears on the job.
ZACH BENOIT Of The Gazette Staff

How do you hold the attention of more than 50 kids for nearly an hour?

If a Friday morning presentation to the second-graders at St. Francis Primary Catholic School is any indication, the answer is simple: Just show them some rocks.

As part of their science program focusing on earth materials, 52 second-grade students squeezed into a classroom to hear Mark Bowman, a development geologist with the Stillwater Mine, talk about geology and get an upclose peek at dozens of gems, rocks and fossils.

“To have somebody come in with that kind of expertise and experience is just amazing,” second-grade teacher Erika Schaff said. “The exploring and the discovery parts has really piqued their interest.”

Bowman’s presentation started with a little background on how he got into the business, moved into a quick geological history of the planet and the kinds of rocks he works with and then turned into show-and-tell.

Each time Bowman brought out a new rock to explain, be it a shiny black and white core sample from the mine or a large quartz crystal, the kids responded with excited oohs and aahs.

By the end they were clamoring to the front of the room to get a closer glimpse and touch the rocks.

“When he brought out the fossil, that was the best,” said Adam Hellegaard, 7. “I have a rock collection at my house. There’s probably about 10 in it, but I’m going to get more now.”

While the kids enjoyed the firsthand look, the adults in the room felt it was a great way to introduce the kids to the practical applications of what they were learning in the classroom.

“We always talk about different kinds of science in the classroom,” Schaff said.

“Geologists study rocks, which is what we’re talking about in science right now, and (Bowman) can just bring that exploratory and hands on side to it.”

Before the presentation Bowman said he hoped it would have an impact on the kids and that it would produce “some new little geologists,” and he may have done just that.

“We hike in the Rims and find crystals a lot,” 7-year-old Annie Byorth said. “But now I want to go out into the Rims and look for more rocks.”

Geologist Mark Bowman shows a rock sample to St. Francis Primary School second-graders Friday. Bowman talked to the kids about geological history, but the variety of rocks he showed off were the biggest hit. BOB ZELLAR/Gazette Staff

Bowman works at the Stillwater Mine. He showed the kids the gear he wears on the job.
© Copyright 2021 Billings Gazette, 401 N Broadway Billings, MT | Terms of Use | Privacy Policy
Powered by BLOX Content Management System from TownNews.com.
You don't have any notifications.