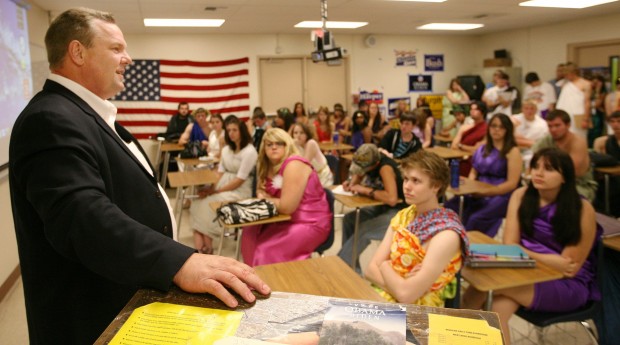 U.S. Sen. Jon Tester spent an hour Thursday morning answering questions from seniors in a West High civics class. “You’re going to be running this show before long,” he told them. 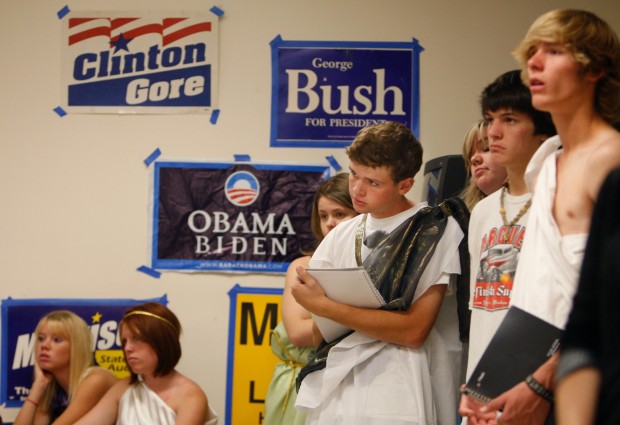 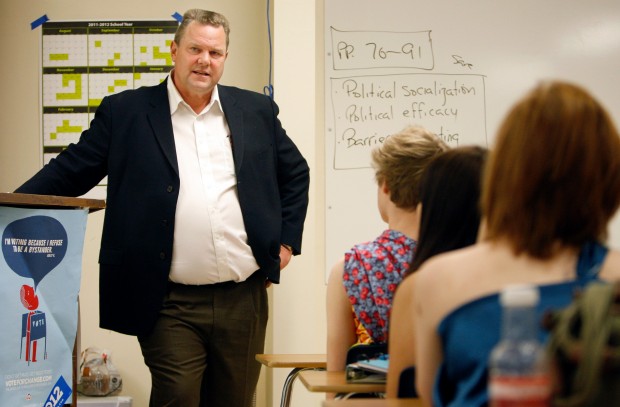 By ROB ROGERS Of The Gazette Staff

And, to the surprise of many students — some dressed in togas for Spirit Week — Sen. Jon Tester gave direct answers.

"They tend to be evasive," Colleen Powers, a senior in the class, said of politicians. "So I really appreciated his directness."

Tester was asked about his stance on everything from abortion and gay marriage to the use of the phrase "In God We Trust."

Answering, he told the class he is pro-choice and believes in a woman's right to choose. He opposes gay marriage, believing that civil unions are the better way to address that issue.

And using the phrase "In God We Trust"?

Tester's visit to West was one of three stops in Billings on Thursday. At the school, he never mentioned Rep. Denny Rehberg — his opponent in his upcoming re-election campaign — and only briefly referred to the race when a question about campaign finances was asked.

In fact, apart from a short statement at the start of class where he gave a brief history of his career in politics, the entire period was left to the students to ask questions.

The questions themselves were frank and in many cases well thought out.

One girl asked him about campaign donors and how donations influence his decisions as a lawmaker.

Tester spoke for a minute about balancing the interests of those who he serves. And then he addressed the donations: "I can't tell you who's contributed to my campaign and who hasn't," he said. "I make a point not to look."

He used the opportunity to criticize the U.S. Supreme Court's Citizen United decision, which affected how corporations can donate money to political candidates.

Corporations that donate directly to campaigns must disclose their identity. Those that donate to a third party that supports or attacks a candidate can remain anonymous, he said.

"Even corporations from the outside the country," he added.

As a result, he said, more money would be spent on the upcoming race for his Senate seat than at any time in the past.

Another student asked him how well he thought President Barack Obama has run the country.

Considering the state the country was in when Obama took office, Tester said the president has done a pretty good job.

But, he said, he was disappointed Obama didn't act on all the recommendations from the Simpson-Bowles Commission, a committee created by the president last year to identify "policies to improve the fiscal situation in the medium term and to achieve fiscal sustainability over the long run,"according to the report.

Murphy was pleased with the visit, noting that in most other states high school students simply wouldn't have the opportunity to question a sitting U.S. senator.

“Filling Montana classrooms, wherever the location, with quality educators remains one of my top priorities,” said Superintendent Elsie Arntzen.

Vandoliers perform in Billings in 2019.

U.S. Sen. Jon Tester spent an hour Thursday morning answering questions from seniors in a West High civics class. “You’re going to be running this show before long,” he told them.