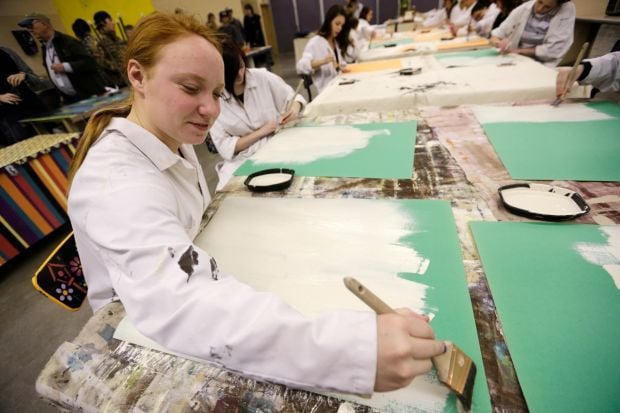 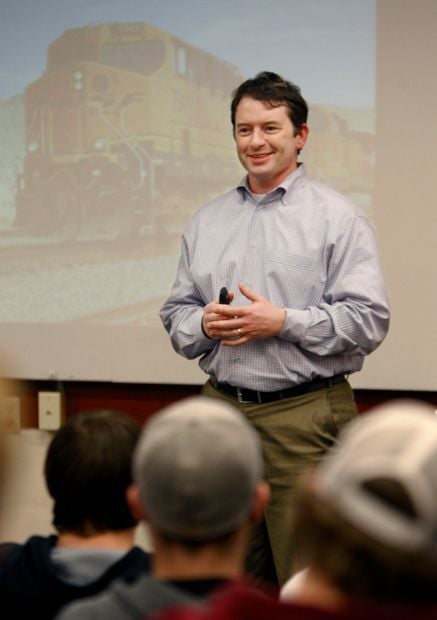 Andrew Shelton of Burlington Northern Santa Fe talks to students at the Career Center on Wednesday. 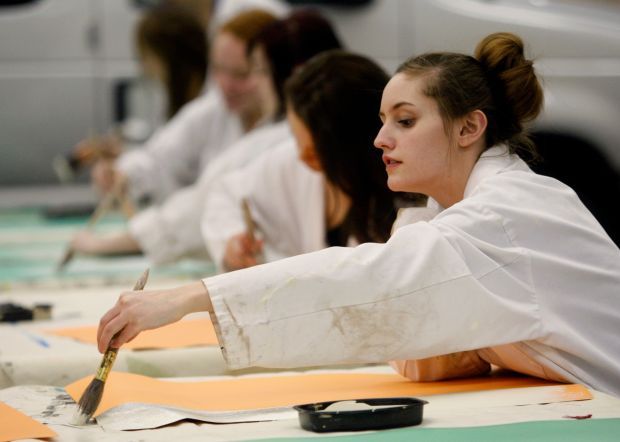 Kenzie Mulconery, a Billings high school student, has felt at home since finding her way into the shop.

Mulconery began high school in a small town in Idaho, where she described herself as an outcast. The feeling stayed with her upon moving to Billings, where she didn’t know her peers at West High School, and it didn’t make her eager to go to class.

That has changed since she began attending the Billings Career Center full time, focusing on automotive work. She’s enrolled in classes that she actually enjoys and that have motivated her to “strive more,” Mulconery said. She even stays after school as a member of the school’s SkillsUSA chapter.

“West isn’t for me; I feel at home at the Career Center,” she said.

Between 800 and 1,000 Billings high school students spend a portion of their day at School District 2’s technical high school — the only one in the state — doing concentrated coursework in everything from construction to biomedical science to engineering.

The Billings Career Center is the most robust embodiment of career and technical education in Montana, a broad category of instruction that focuses on job skills and workforce development. Traditionally associated with shop class, it also includes agriculture, business, family and consumer sciences, and more.

Programs like these around the state could get a big boost if a bill put forward by Billings school officials and Yellowstone County legislators gets approved by lawmakers in Helena.

Career and technical education courses in Montana schools have relied primarily on local, and some federal, funds as the state earmarks only $1 million annually. Billings received $87,000 from the state this year, while small districts often get only a few thousand dollars each.

“We are not funded sufficiently statewide to do that,” he said. “It’s about the state becoming more competitive.”

SD2 leaders are working with a handful of Yellowstone County legislators to increase the funding to $10 million per year for districts to expand and enhance CTE offerings.

The increase would bring Montana into closer alignment with its neighbors, all of which allocate millions more for CTE, Bouck said.

“Even if we raised the $1 million that spreads statewide right now to $10 million, we are still lagging behind,” said Sen. Robyn Driscoll, D-Billings.

The bill, introduced last week, hasn’t appeared on education advocates’ lists of legislative priorities, but looks like it could get a warm, bipartisan reception, and state Superintendent of Public Instruction Denise Juneau also plans to support it.

Rep. Don Jones, R-Billings is carrying House Bill 356. An advocate for “responsible funding of education,” Jones is skeptical of the Democrats’ proposal to pay for public prekindergarten. But CTE funding, he said, is appealing because it benefits the majority of high school teens who don’t go on to four-year colleges.

“Our main school system is designed to get kids to college,” Jones said. “I look at it, and I believe that that’s very important. But not every kid needs to go to college. Not every student needs to get a four-year degree.”

“This gives more options for kids to be engaged,” he said.

SD2 leaders, too, said schools need to be mindful of the reality that most students don’t go on to college, and to make sure they are prepared to enter the job market immediately.

“We want students to be good employees when they enter the workforce,” Career Center director Scott Anderson said.

But Anderson said educators’ focus at the Career Center is more than that. Pointing out that most careers now require some form of post-high school training, Anderson said the school’s concentrations aim to prepare students for a variety of endeavors, whether into industry, an apprenticeship or post-secondary education.

Regardless of their individual aspirations, state and national data shows that students in CTE programs graduate at above-average rates.

“I know a lot of people say without the Career Center, they wouldn’t be in school right now,” Mulconery, the Billings senior, said.

Students at the Billings Career Center described an accepting environment fueled by students’ interest in their studies, which they said leads to respect among peers.

“We’re all pretty much out here for a purpose, and that makes it a lot easier,” said Austin Smart, a senior.

The students said their relationships with teachers are close, and even those they don’t know are likely to say “hello” in the halls.

Inside the classroom, they feel less like pupils than employees — and that’s a good thing, they said.

Winter took the skills he gained through a first-year automotive class to Billings Hardware, where he repairs small engines.

Smart first started thinking about the Career Center after a class tour in eighth grade, but he had to spend his first two years of high school elsewhere before enrolling full-time here.

Getting students into CTE programs earlier is one of the center’s goals if more funding were available, Anderson said. Federal Carl D. Perkins money helps buy expensive equipment and pays for some professional development, while current state dollars help with smaller supplies.

SD2 is developing its vision for its career center whether or not additional state funding is approved. That vision, Bouck and Anderson said, involves working with regional businesses to make sure CTE offerings align with industry needs.

“We need to build flexibility for our students now and into the future,” Bouck said.

Bouck asks for support ahead of CTE bill hearing

With a House committee soon expected to mull a bill that would increase funding for technical education programs in Montana high schools, Scho…

School districts have a profound need to continually stay ahead of students. We look at technology today and think, “What will these students …

Andrew Shelton of Burlington Northern Santa Fe talks to students at the Career Center on Wednesday.