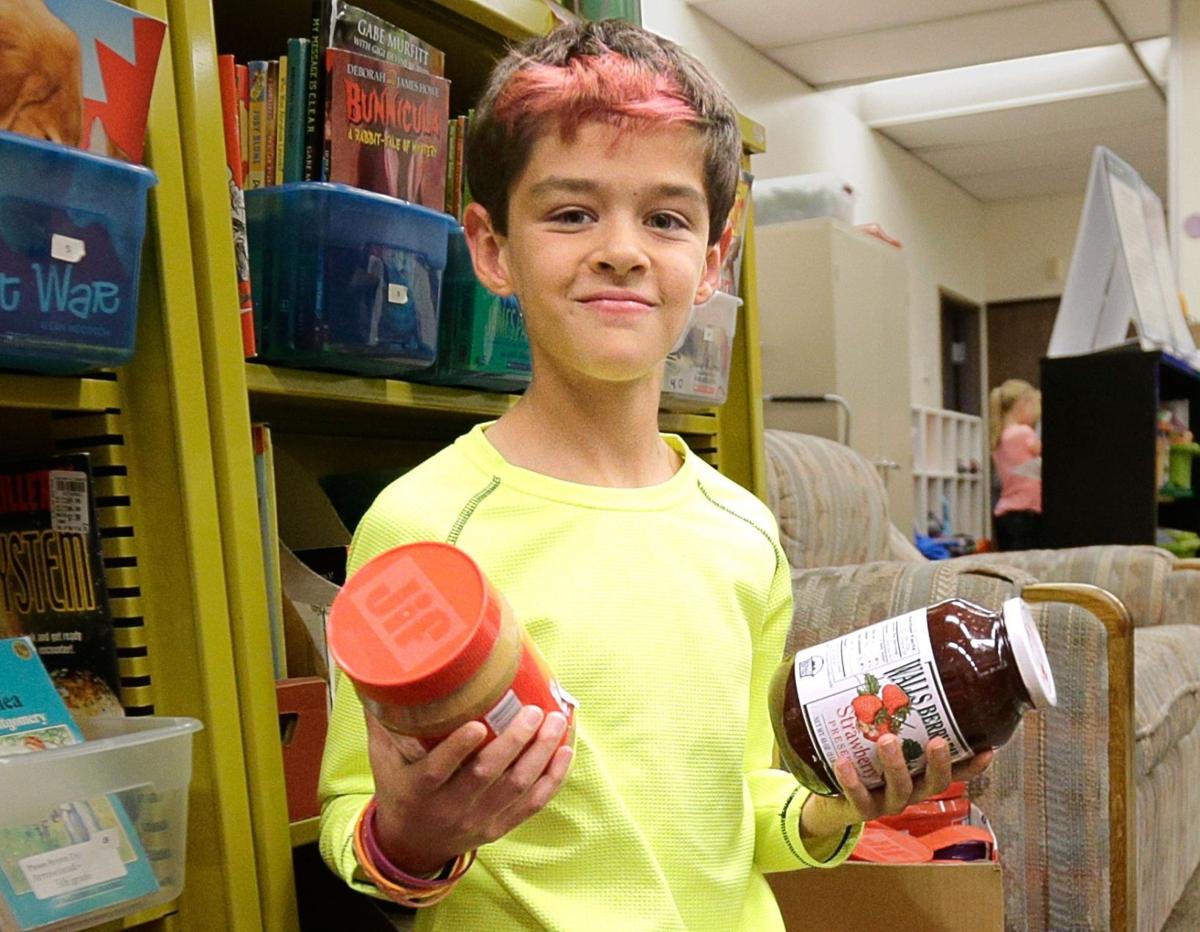 Nate Smith holds some of the peanut butter and jelly he and his Arrowhead Elementary schoolmates have donated. 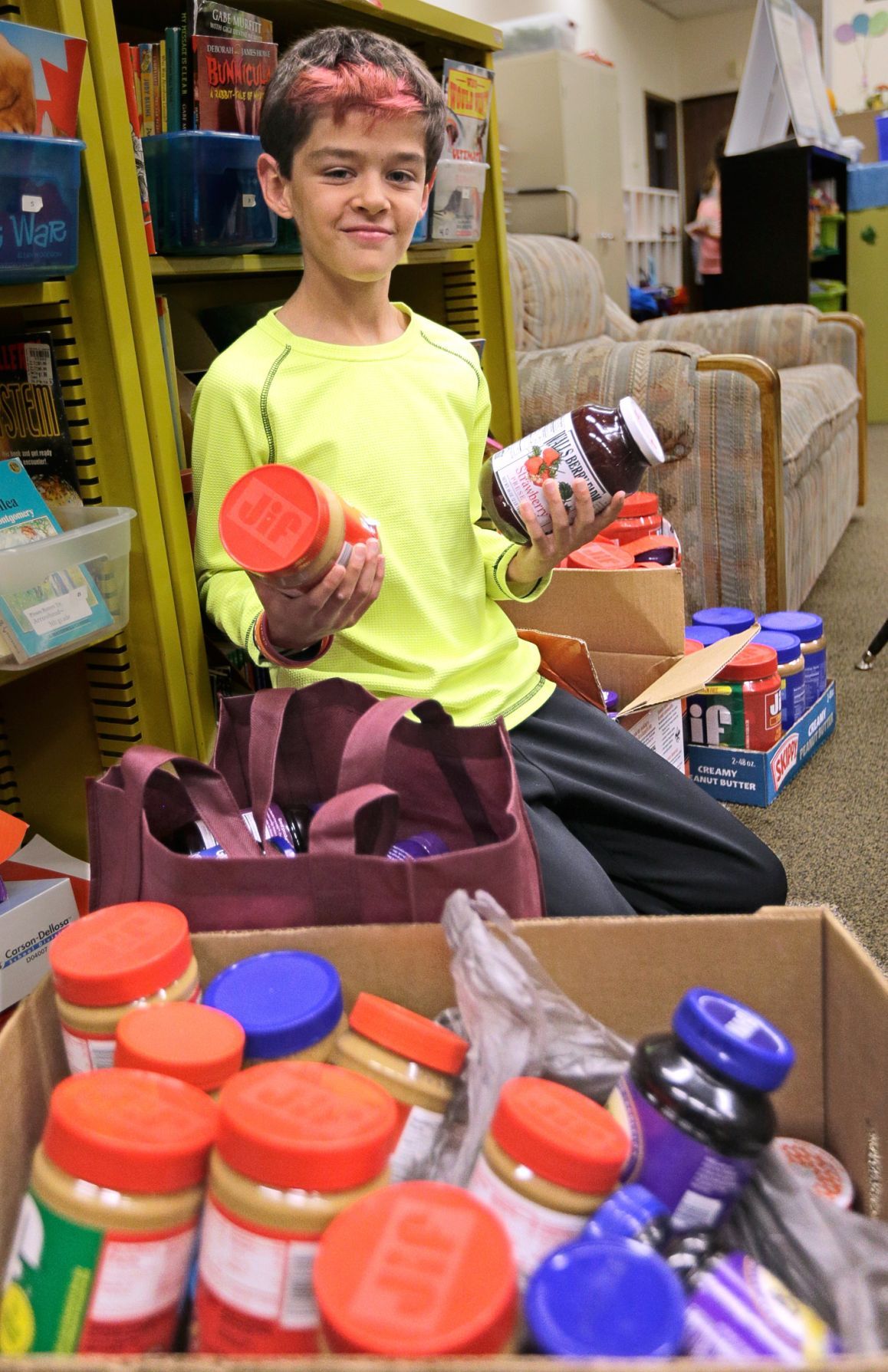 Nate Smith's drive to get his Arrowhead Elementary schoolmates to donate sandwich fixings has netted 629 jars so far.

Described by his teacher as “someone who has a passion for others” and by his principal as “a student who just wants to make the community better,” Arrowhead Elementary School fifth-grader Nate Smith describes a successful peanut butter and jelly drive he orchestrated as “just the right thing to do.”

With a goal of convincing his schoolmates to bring 500 jars of peanut butter, jelly or honey to school to benefit Family Service Inc. of Billings, Smith and his fellow students had donated 629 jars by Tuesday, with three more days left in the drive.

On top of that, four other Billings elementary schools — Bitterroot, Bench, Highland and Eagle Cliffs — have joined the cause, organizing PB&J drives of their own.

“This is just something that dropped into our lap,” said Stacy Brown, executive director of Family Service Inc., which feeds more than 600 hungry families each month. “I haven’t met a kid yet who doesn’t like peanut butter. This is a gift to the community and to (Nate’s) classmates. This is someone who really cares about people’s basic need — food.”

Pam Meier, Arrowhead principal, said, "All these jars of peanut butter and jelly — they're needed, and they'll be well used by families. It's nice for kids to bring something besides money to help out. The kids are happy to do it."

Nate’s mother, Pam Before, said she read a magazine article about another community’s peanut butter and jelly drive and asked her son, “Why don’t we do that?”

She and her son placed collection boxes in each Arrowhead classroom, “but it soon became too much for the boxes,” she said. “They now have peanut butter and jelly everywhere.”

She and her son visited Family Service’s downtown Billings location, and both were amazed by how many families the agency serves, she said.

“We were shocked,” she said. “We knew we would need every jar we could collect.”

Once word spread that Before would be treating the winning classroom to a pizza party, students’ “ultra-competitive” natures kicked into overdrive, Before said.

“It was kind of fun" on Monday dropping her son off at school, she said. “I figured that after two weeks, everyone would be burned out on peanut butter. But nearly every kid I saw had a jar of peanut butter or jelly.”

“There are just so many homeless people in Billings. I wanted to give them something,” Nate said during a few minutes away from typing lessons in Shannon Moore’s Arrowhead classroom Tuesday afternoon. “Peanut butter is not that costly, so it’s something we thought that we could do easily.”

During the first week — Nov. 9 through 13 — Arrowhead students donated 191 jars. This week, the drive has taken off, Nate said.

“I look at North Park, and I see so many homeless people that it makes me sad to think about it,” he said. “Even if they spend their money on bad things — alcohol and drugs — peanut butter and jelly helps.”

He praised the efforts and the generosity of his fellow students. Some, he said, told him, “‘Man, I wish I could help,’ This is a small task that can help a lot.”

“It won’t help everyone get a home,” he said, “but it does give them food, and everyone needs food.”

Moore, the Arrowhead teacher, credited Nate’s compassion as the most important quality for making the food drive so successful.

“It is something that has made others want to help,” she said. “He spoke to other classes. His passion is contagious.”

^pA new $63,900 refrigerated truck donated by the Wal-Mart Foundation will help Family Service Inc. add to the number of families it helps fee…

^pStanding amid the hula-hoop-heavy celebration at the Yellowstone Boys and Girls Ranch recreation center on Wednesday night, Casey Burrows wa…

Nate Smith holds some of the peanut butter and jelly he and his Arrowhead Elementary schoolmates have donated.

Nate Smith's drive to get his Arrowhead Elementary schoolmates to donate sandwich fixings has netted 629 jars so far.