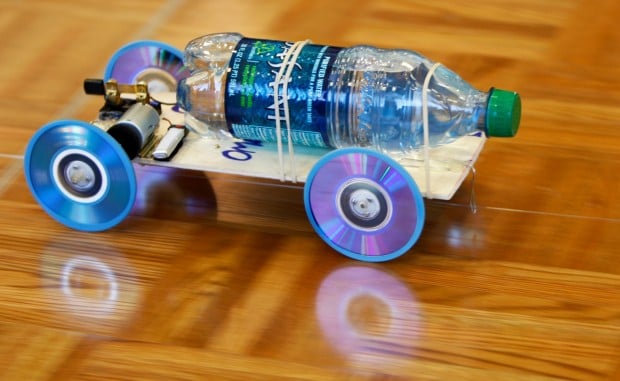 A battery-powered car carries a bottle of water down the track during the middle school car challenge as part of the Big Sky Regional Science Bowl at the Crowne Plaza Saturday. 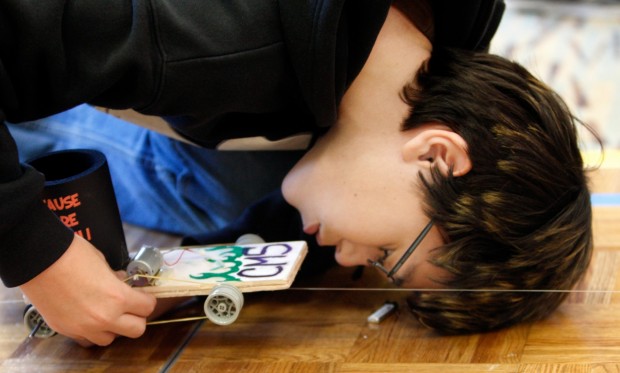 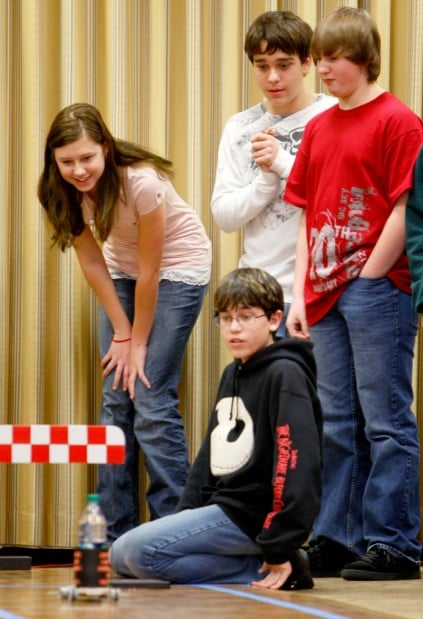 The Columbus Middle School science bowl team cheers on their battery-powered car during a time trial at the Big Sky Regional Science Bowl at the Crowne Plaza Saturday. 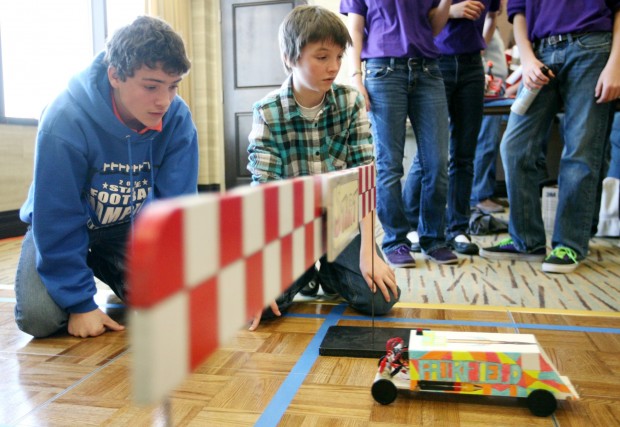 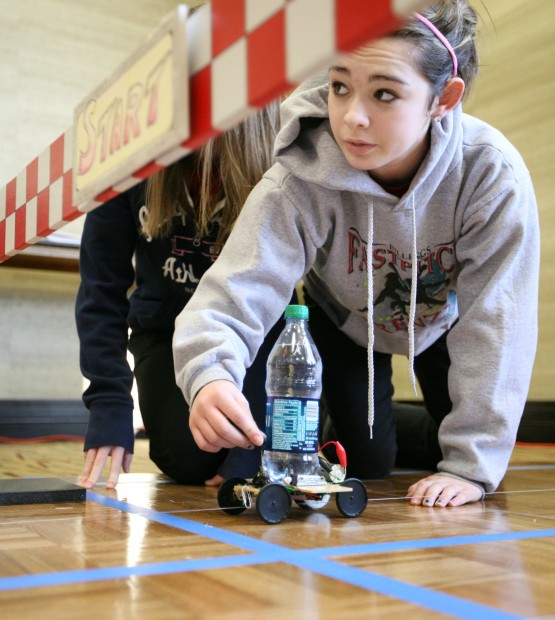 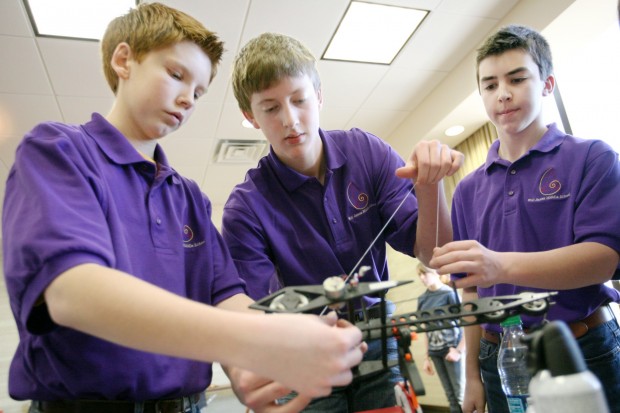 It's impressive what a handful of middle school students can do with a motor, a battery and a bottle of water.

Their task: to build a small race car based around those items and zoom it down the length of a narrow track for the 20th Annual Big Sky Regional Science Bowl, held on Friday and Saturday at the Crowne Plaza.

"We worked on this quite a bit," said Tehya Ray, a seventh-grader at Park City Middle School. "We went in almost every day for a few hours for a couple of weeks."

The bowl, sponsored by the U.S. Department of Energy, brought in 220 students from 28 middle and high schools from the eastern half of Montana to compete in a Jeopardy-style academic competition and, just for the younger students, the lithium ion battery-powered car races.

"This is to encourage kids to explore careers in science, to choose science," said Cheryl Jones, event coordinator.

About 100 people crammed into a room on the 20th floor of the hotel to see how the kids' cars turned out. The teams -- nine of them consisting five students each -- built and designed the frames around the motor and battery while using a full 20-ounce water bottle as a weight.

"I think they learn some encouraging skills, design and troubleshooting skills," said Nilo Cabrera, the event's middle school regional coordinator. "It teaches them lifelong skills that they will take into their adult life."

A pair of teams from Will James Middle School began meeting last October to design two sleek, minimal cars for the competition.

Eighth-grader Austen Harrell, 14, said the team used CAD2 software to design the cars and a router to cut them out. During the design phase, they based their plans on some of the world's fastest vehicles -- racers at the Bonneville Salt Flats in Utah.

"I know I spent about two hours every day working on this," he said. "We've all been kind of interested in science since we were pretty small. Plus, it's a great opportunity."

One of Austen's teammates, 14-year-old Ella Morone, said that understanding how the world works is what draws them into science.

"It's just amazing how many things are going on around you in a single second," she said.

"The car, things like that, I love building them," said seventh-grader Shelby Kluth. "We've done pretty well and I want to continue doing things like this."

While the middle schoolers raced their cars, nearly 20 high school teams from as far away as Glasgow matched wits in the academic competition on the hotel's lower floors.

A pair of Billings Central Catholic High teams gathered around a piano during a bye round on Saturday morning to plan. Team leader Hayden Ayre, 18, said a love of trivia games and an interest in science makes it a fun, informative event and advised that anybody with even a remote interest in it to give it a try.

"I think events like this really encourage people to participate in science and show them that it's not just a bunch of people with thick glasses sitting around computers in labs somewhere," he said.

Helena High took first in the academic competition and will go on to compete in Washington, D.C. C.M. Russell High took second place.

Glasgow Middle School won the academic middle school competition and will also get a trip to Washington, D.C.

A battery-powered car carries a bottle of water down the track during the middle school car challenge as part of the Big Sky Regional Science Bowl at the Crowne Plaza Saturday.

The Columbus Middle School science bowl team cheers on their battery-powered car during a time trial at the Big Sky Regional Science Bowl at the Crowne Plaza Saturday.