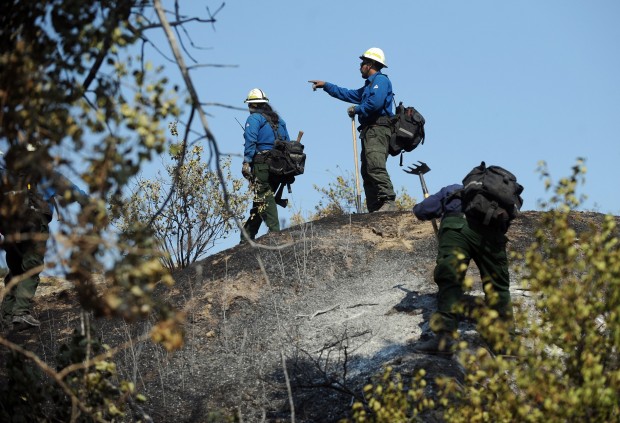 Members of the Bighorn Initial Attack crew search for hotspots in the Highway 87 Fire Tuesday morning. 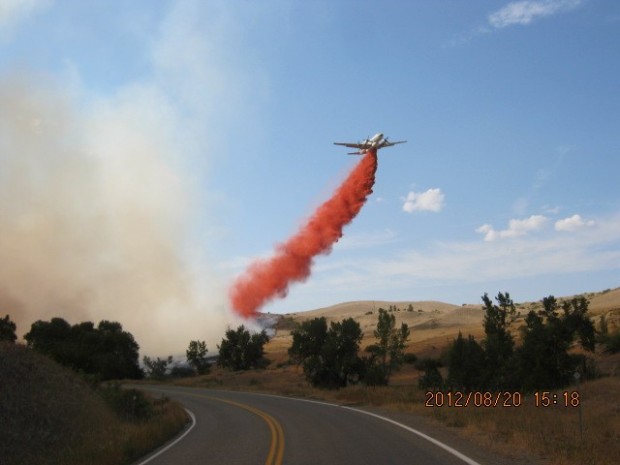 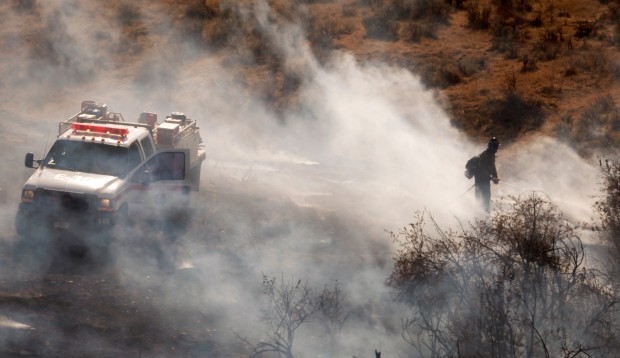 A firefighter works as a fire burns east of Billings along Highway 87 East on Monday, Aug. 20, 2012. 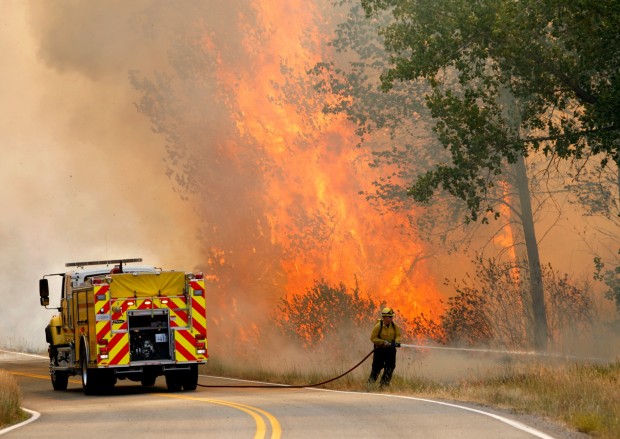 A Lockwood firefighter sprays water on a fire as it crosses Highway 87 East southeast of Billings on Monday. 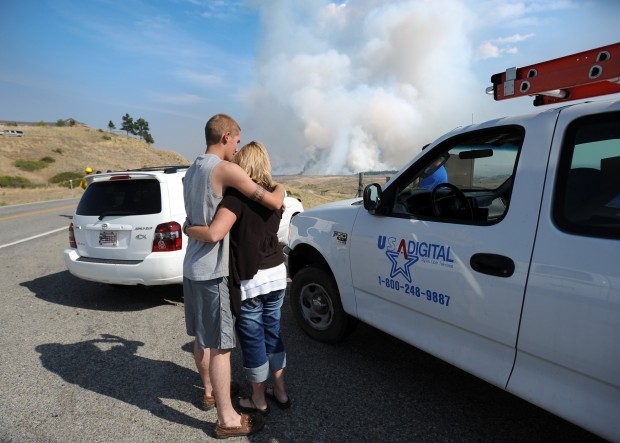 Luke Webb and Rhona Glassing hug as they watch a fire that destroyed their home an hour earlier. The two were watching from a vantage point east of Lockwood on Highway 87 East. 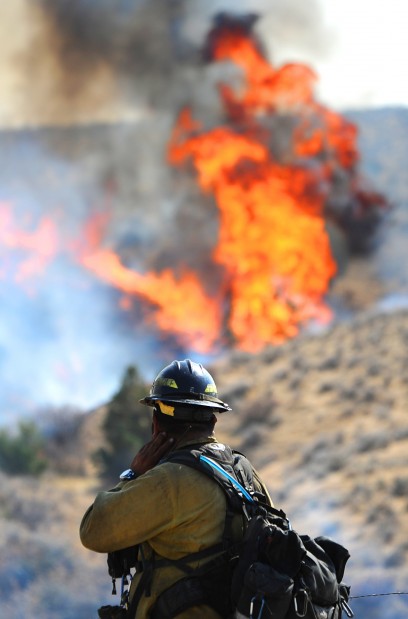 Fire fighters battle a range and timber fire along Highway 87 East on Monday. 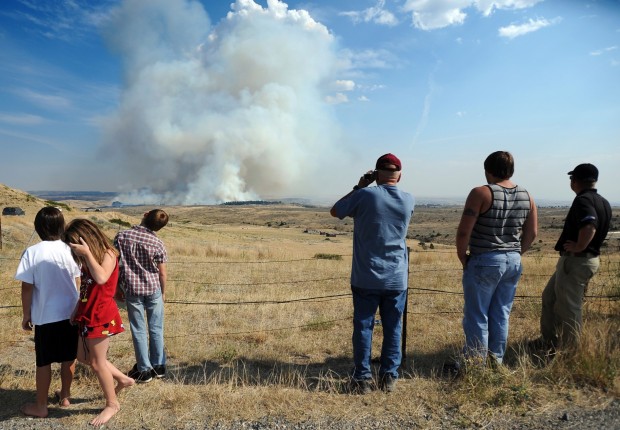 People gathered on a high point about five miles east of Lockwood on Highway 87 East to watch as a wildfire burned in the area Monday afternoon.

7:30 A.M: Thanks to slowed growth overnight, crews hope to get a better handle on the estimated 2,000-acre Highway 87 fire burning southeast of Billings, said Randy Pretty On Top, with the Crow Agency Bureau of Indian Affairs Fire and Aviation fire base.

"Right now, the fire’s looking pretty good," he said. "They’re trying to get dozer and control lines in place. It sounds like they’re getting a good handle on it."

While the fire's size is estimated at 2,000 acres, Kohn said fire officials still don't know exactly how big it is.

Humidity levels in the low teens helped the fire spread quickly on Monday and that, combined with high temperatures, will likely be the case again Tuesday.

"It was really dry yesterday and it will be again today," Kohn said. "So we’re not just sitting back on our heels here today."

The fire also cut power to many residents, from the Pryor area up to Blue Creek just south of Billings.

Brandon Whittman, general manager of the Yellowstone Valley Electric Cooperative, said that power was restored to the Blue Creek area overnight by switching to another substation and that crews went out at 5:30 a.m. Tuesday in hopes of getting power back to Pryor by the end of the day.

"We've got 13 transmission structures that feed our Pryor substation that need to be replaced," Whittman said. "We've had to call on other cooperatives to find enough material that we need. From all the fires this summer, materials are pretty scarce."

No other structures are known to have burned in the fire other than a home that was destroyed on Monday when the fire started.

"Thank the good Lord, all the rest of the structures out there had structure protection," Pretty On Top said.

6:30 A.M.: Tuesday's weather forecast has firefighters wary as they battle the Highway 87 fire, which started Monday afternoon southeast of Billings and has burned as much as 2,000 acres.

"The hot temperatures and that wind, even thought it’s not going to be super gusty, could be enough to keep the fire going from overnight," said Paula Short, Montana Department of Natural Resources spokeswoman. "And if the winds come up from the south, that's a concern because it could push the fire towards more homes."

By 11 p.m., the fire, burning on the Crow Reservation and private lands in Yellowstone County, wasn't growing. But that could change with temperatures in the high 90s and some expected wind gusts of as high as 25 mph.

While some fire lines have been built around portions of the fire's perimeter, it remains zero percent contained until officials feel confident it won't jump those lines.

A news release from Crow Agency Bureau of Indian Affairs fire officials said that engines and crews worked through the night protecting homes along Pryor Creek.

Pryor Road and Highway 87 East have reopened to local traffic, although fire information officer John Kohn asked the public to avoid the area if possible to allow room on the two-lane road for fire crews.

The BIA and DNRC have taken over joint command of the fire -- with BIA and Lockwood officials coordinating tactics -- and are receiving assistance from crews from all over Yellowstone County.

Six aircraft — single-engine air tankers, helicopters and a spotter plane — fought the fire from above until dusk, dropping retardant and water.

The fire, which destroyed at least one house, was being battled by 80 firefighters from multiple agencies, Lockwood Fire Chief Bill Rash said. No injuries had been reported.

At 8:30 p.m., Paula Short, a spokeswoman for the state Department of Natural Resources and Conservation, said the fire was estimated at 1,500 to 2,000 acres and was 0 percent contained.

She said fire managers were concerned about threats to the Briarwood subdivision, just south of Billings and east of Blue Creek Road. The fire started between Lockwood and Pryor Creek about six miles east of Lockwood off U.S. Highway 87 East, on the Crow Reservation.

The fire also damaged electricity transmission lines in the area, leaving many without power Monday and overnight.

Brandon Whittman, general manager of the Yellowstone Valley Co-op, said about a quarter of the co-op’s customers in the Blue Creek area were without power until 9 p.m. and that all of its Pryor customers – about 300 meters – would be without power overnight as damaged structures and equipment are replaced. He said the customers are mostly residential.

He said crews have been on the scene assessing the damage but that it’s difficult to get an accurate assessment in the dark.

Whittman said the goal is to have all power back on Tuesday morning. To that end, crews were going to spend the night figuring out what types of poles and equipment were in the fire area so replacement material would be ready first thing in the morning. Crews also would fly the transmission line Tuesday morning.

Short said the Highway 87 fire, as it has been named, is believed to have been human-caused and a fire investigator has been called in.

Other personnel and equipment were on the way from Billings, Laurel, Blue Creek and Shepherd fire departments.The fire was burning in bone-dry hills of grass and sagebrush interspersed with stands of pine. Rash said the Lockwood firefighters and DNRC crews were concentrated on the north side of the fire and the BIA was on the south.

Jon Kohn, a spokesman for the BIA fire crew from Crow Agency, said at 6 p.m. that the fire was centered about a mile west of Pryor Creek Road and was moving south, parallel to that road, at the rate of a mile or two an hour.

Later in the evening, about 10:30 p.m., Kohn said all roads had been opened to local traffic, and non-residents were asked to stay away.

"It's important that the public avoid the areas entirely" because of all the traffic related to the firefighting effort, Kohn said.

Seven miles east of Lockwood, 19-year-old Luke Webb was home alone in the 2,000-square-foot house that his family leases when, about 3 p.m., "I realized there were flames feet away."

He said he grabbed his keys and phone and was driving away when he met some ranchers with water trucks.

"But by that time the house was too far gone to try to save," he said.

Webb said he thought maybe the garage didn't burn, but his father, Tim Webb, said later in the evening that his family lost everything, including the house and garage, cars and a backhoe.

The Webbs lived on 120 acres. Luke Webb said that when he left the house, "hundreds of yards down our property, everything was ablaze. Every tree was on fire."

Earlier in the afternoon, Yellowstone Sheriff's Deputy Blaine Weston was manning a roadblock a few miles east of Lockwood. He dealt with a steady stream of ranchers and others who wanted to be let through to help fight the fire, but he had to turn them all back.

One of them was Mike Krueger, who lives on a ranch owned by his father-in-law, Lyndon Coburn.

"I went to town to go grocery shopping and I heard about this and I've been flying ever since," he said.

Pointing to a distant ridge from which a thick plume of smoke was rising, with firefighters' pickups visible on the ridge, Krueger said that was the Coburn ranch.

"We need to get down there and fight this son of a bitch," Krueger said.

Later, Weston said many of the people he turned back seemed to have found their way around the roadblocks by taking ranch roads.

"A lot of people, we're asking to be patient with us," Rash said. "This will be an extended fire."

Rash said he knew of only one house lost to the fire. On the south end of the fire, Kohn said engines were doing structure protection and no buildings had been lost.

Short, with the DNRC, said winds were predicted to be out of the south Tuesday, which also a cause for concern. Firefighters were engaged in structure protection late Monday and were planning to work through the night, she said.

Photos from the wildfire burning southeast of Billings

The Highway 87 fire burning southeast of Billings is now 90 percent contained, and officials plan to turn management of firefighting efforts over to local agencies on Wednesday evening.

Members of the Bighorn Initial Attack crew search for hotspots in the Highway 87 Fire Tuesday morning.

A firefighter works as a fire burns east of Billings along Highway 87 East on Monday, Aug. 20, 2012.

A Lockwood firefighter sprays water on a fire as it crosses Highway 87 East southeast of Billings on Monday.

Luke Webb and Rhona Glassing hug as they watch a fire that destroyed their home an hour earlier. The two were watching from a vantage point east of Lockwood on Highway 87 East.

Fire fighters battle a range and timber fire along Highway 87 East on Monday.

People gathered on a high point about five miles east of Lockwood on Highway 87 East to watch as a wildfire burned in the area Monday afternoon.