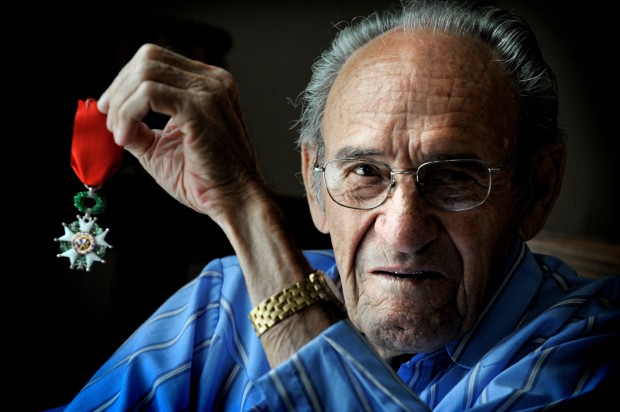 Willard LaCount shows the Legion of Honor medal he received from the French government recently for his service in World War II. 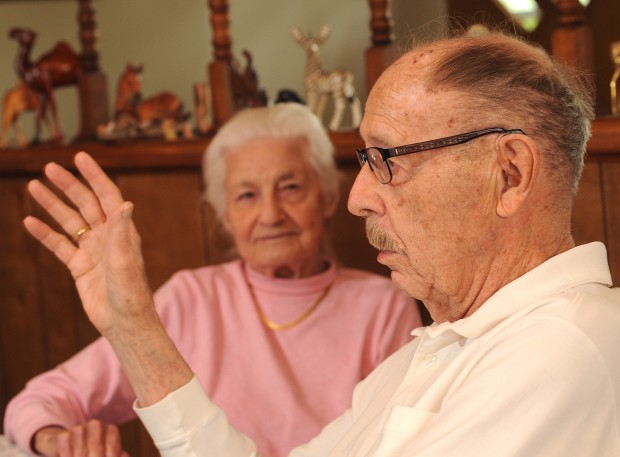 Edwin Ward, of Billings, received a Chevalier of the Legion of Honor from the French Republic. Ward talks about the award with his wife, Gladys, in their Billings home. Ward served in the Army Air Corps during WWII and was part of the Allied invasion forces in Europe. 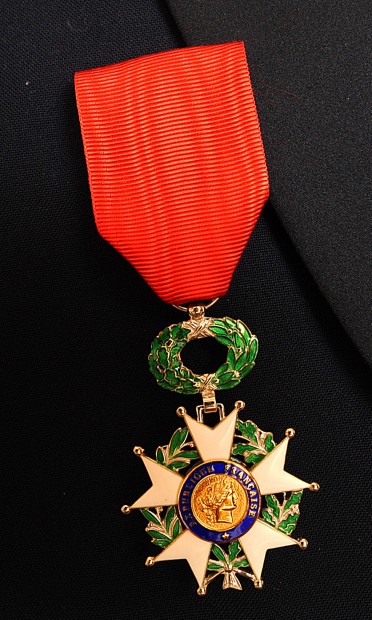 Two Billings veterans received a Chevalier of the Legion of Honor medal from the French Republic for service in World War II. 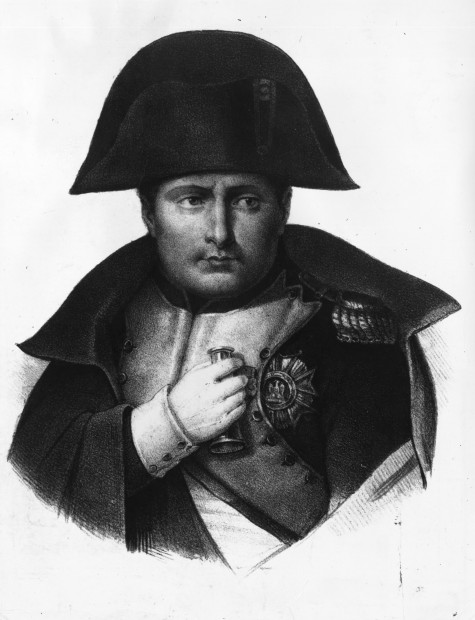 Napoleon with his Legion of Honor medal.

When the French government recently designated Willard “Bud” LaCounte a Chevalier of the French Legion of Honor, the Billings World War II veteran had one regret.

“I wished the devil my wife could be here because I spent 60 years trying to convince her I didn’t win the war by myself,” the ramrod straight, 6-foot-2 rancher lamented.

Beside him at ceremonies in Hamilton on May 4 were four other Montanans who had a hand in the Allied victory in Europe. They, too, received the colorful Legion of Honor medal from France’s Deputy Consul General Corinne Pereira.

Another Billings veteran, retired Air Force Senior Master Sgt. Edwin I. Ward, was among those honored by order of French President Francois Hollande.

LaCounte, who hit the beaches of Normandy on June 7, 1944 — the day after the initial landing — was married for 67 years to his wife, Venice. She died more than three years ago. They ranched at Bainville in northeastern Montana before retiring to Billings in 1988.

While Venice was alive, the couple went dancing three nights a week. Since her death, he’s cut it down to two.

Dancing is one of many things that LaCounte, 90, and Ward, 93, have in common.

“He’s a heck of a dancer,” said Gladys Ward of the career airman and retired West High teacher she married 20 years ago.

Although they didn’t know each

other until they met at the Elks Club long after the war, LaCounte and Ward were part of a U.S. troop buildup in Britain as the Allied forces prepared for the invasion of Nazi-held Europe on France’s Normandy coast on D-Day, June 6, 1944. Both drove through France as part of the liberation force that ended in Germany’s defeat in May 1945.

LaCounte, an enrolled Chippewa, was born and raised in Bainville and educated at Indian boarding schools he hated.

In his teens, he headed west to Seattle, sometimes catching rides on freight trains. On the docks at the port city, he followed a crowd into a building and came out with a job. LaCounte was shipped to Dutch Harbor in Alaska’s Aleutian Islands to work on construction of a submarine refueling station. He registered for the draft while there.

About six months after the attack on Pearl Harbor, Japanese aircraft carriers launched an aerial assault on the isolated American outpost.

“I never ran so fast in all my life,” LaCounte recalled of his encounter with strafing Japanese fighters. “You better believe I was scared.”

After the attacks on June 3-4, 1942, preparations were made to evacuate civilians. But by then LaCounte had received his draft notice. He was 19 when he reported for duty in Butte and was shipped to the Mojave Desert in California for training.

Ward was working as a printer’s apprentice on the West Coast when he was drafted early in 1942.

He was 22 when he arrived at Tucson, Ariz., for boot camp.

“I was the oldest guy in my outfit,” he remembered. The war was “a young man’s business,” he observed.

Acute appendicitis after arriving forced him to miss most of basic training.

“By the time I got back it was all over, and I was transferred to Topeka, Kan.,” Ward said.

Although he had been drafted into the Army, he was assigned to the Army Air Corps about a week later. After the war ended, he signed on with the U.S. Air Force in 1947 and retired in 1965 as senior master sergeant.

At Topeka, where he learned administrative work, the Air Corps was training B-24 bomber crews. In early 1943, they were sent to England.

“We were at Ascot, the famous horse racetrack, camped right inside the track,” he said. “We stayed there until after D-Day. I was sent to Paris just after the liberation.”

What he remembers most from his days in Paris was the rate of exchange.

“When we took Paris, cigarettes were the thing,” Ward said. “One cigarette could buy you anything. Then coffee became the currency, especially in Germany.”

LaCounte’s 118th Anti-Aircraft Battalion got its overseas orders in November 1943 and arrived by ship in Glasgow, Scotland, on Christmas Eve.

A few days later, his battalion and its 90 mm guns moved to Henley-on-Thames, a picturesque village north of London. Shells for the guns were 39 inches long and weighed 39 pounds each, he remembered.

“It was in the heart of the industrial section,” LaCounte said. “Germany was sending bombers over every night — every single night.”

On the day LaCounte drove off the landing craft on the French beach under enemy fire, his son Larry was born.

“You just can’t imagine it,” LaCounte said of the chaos at Normandy. “Talk about having the hell scared out of us, but my wife had the son scared out of her.”

While they were unloading on the beach, German prisoners were being marched onto ramps to board landing craft that would take them to England. Sometimes a wave would come along and the prisoners wouldn’t make it to the ramp, he said.

“I don’t know how many of them drowned,” LaCounte said.

From Normandy, his battalion was on the move constantly, he remembered.

“As the people ahead of us captured a landing strip or a railhead or a factory, they moved us in to protect it,” he said. “We moved about every 10 days. It was pretty hairy for a few months until the Germans ran out of aircraft.”

Ward landed on Omaha Beach after D-Day. There were so many ships in the channel that they had to wait days to disembark. His outfit drove across northern France to the U.S. 9th Air Force Headquarters in Creil.

From there, they moved on to Luxembourg and finally into Germany. An image that remains strong after all these years is the Nuremberg Opera House still standing when everything around it had been reduced to rubble.

In Germany, Ward worked repatriating soldiers from many lands who had been in German prison camps. The refugees were housed in the basement of the barracks where the U.S. soldiers were billeted. Most of them were Poles who didn’t want to go back to their homeland.

LeCounte finished his military service on a happier note. He also helped in the repatriation effort helping soldiers from all over the world. Just before his discharge in December 1946, he and another soldier were sent to Switzerland to check out hotels and restaurants for potential rest and recreation for troops remaining in Europe.

“We were there three weeks,” LaCounte said. “It was the best assignment anyone could ever have.”

Both Ward and LaCounte were married before they shipped to Europe, and returned to wives and long and happy marriages. Ward was married to his first wife, Doris, while in basic training. Working on the diplomatic front, the Wards were stationed in three countries over seven years.

When he retired from the Air Force 20 years after the war, Ward was hired to teach world affairs and international relations at West High School in Billings. During his years in the Air Force he had earned a college degree, though not in teaching. He taught his first year; then did his student teaching to gain his certification. He later got a master’s degree. Ward retired from teaching in 1982, and he and Doris took up the antique business until she was no longer able to travel to shows.

After Doris’ death, he sought counseling to help deal with his grief. That’s when he met Gladys.

“For years she had been an active AARP person who helped people who were dealing with grief and loss,” he said. “We had a cup of coffee and that was pretty much that.”

LaCounte and Ward also both love travel. Ward estimated that he has visited 80 countries over the years, including returning to France for the 50th anniversary of the D-Day landing.

LaCounte said he and Venice traveled to 90 counties and 48 states. He returned to Switzerland and to France many times for D-Day ceremonies.

His travel plans for next summer include a return to France for the 70th anniversary of the D-Day invasion.

The French Legion of Honor was established by Napoleon Bonaparte in 1802 to recognize valor in battle against foreign enemies on French soil.

The award has five grades, the highest being Chevalier, or knight.  American and other non-French soldiers are eligible for the Legion of Honor only if their service meets very exacting requirements.

Wallis saw action on gridiron, in skies over Germany

There was no ambiguity about what men of George Wallis’ generation would be doing after college.

Willard LaCount shows the Legion of Honor medal he received from the French government recently for his service in World War II.

Edwin Ward, of Billings, received a Chevalier of the Legion of Honor from the French Republic. Ward talks about the award with his wife, Gladys, in their Billings home. Ward served in the Army Air Corps during WWII and was part of the Allied invasion forces in Europe.

Two Billings veterans received a Chevalier of the Legion of Honor medal from the French Republic for service in World War II.

Napoleon with his Legion of Honor medal.