Good riddance, February: 2nd coldest ever, and 3rd snowiest
Share this
{{featured_button_text}}
1 of 2 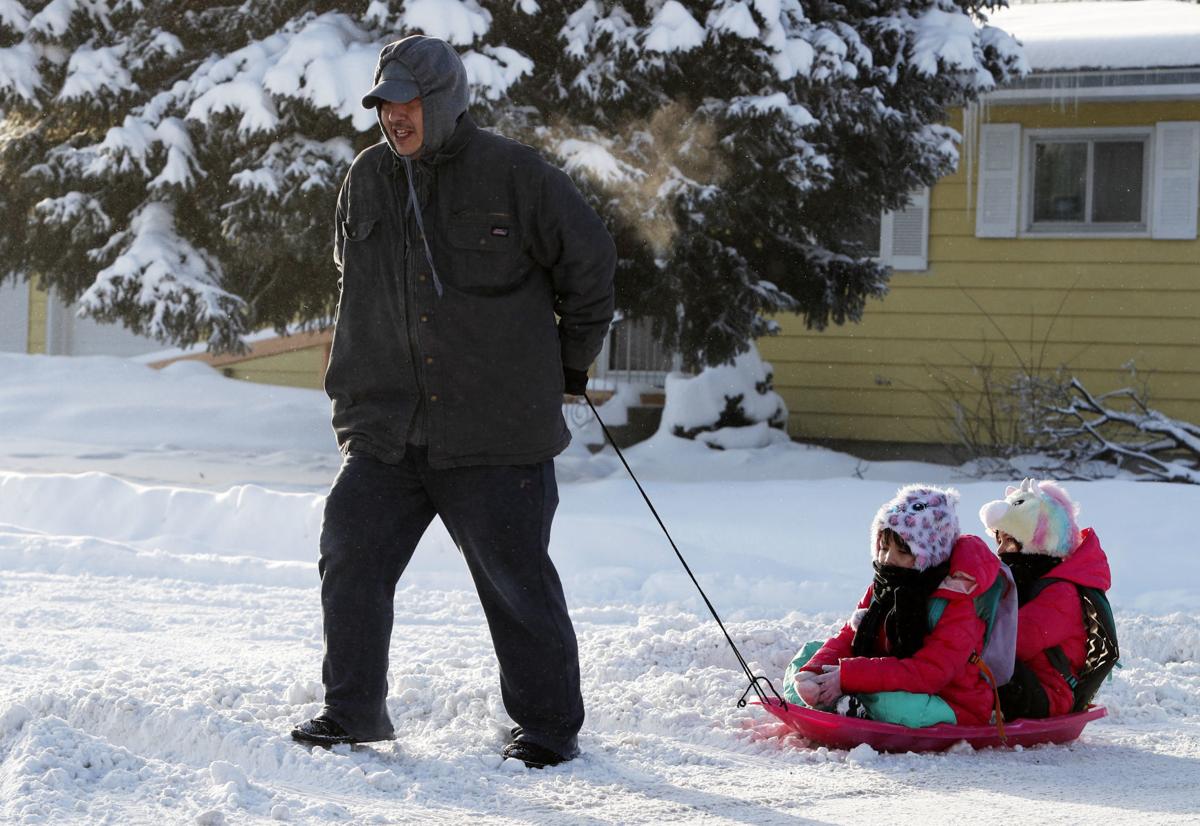 Geronimo Gardner pulls his daughters Priseis, 6, and Sienna, 5, in a sled to school on 12th Street West on Friday morning. 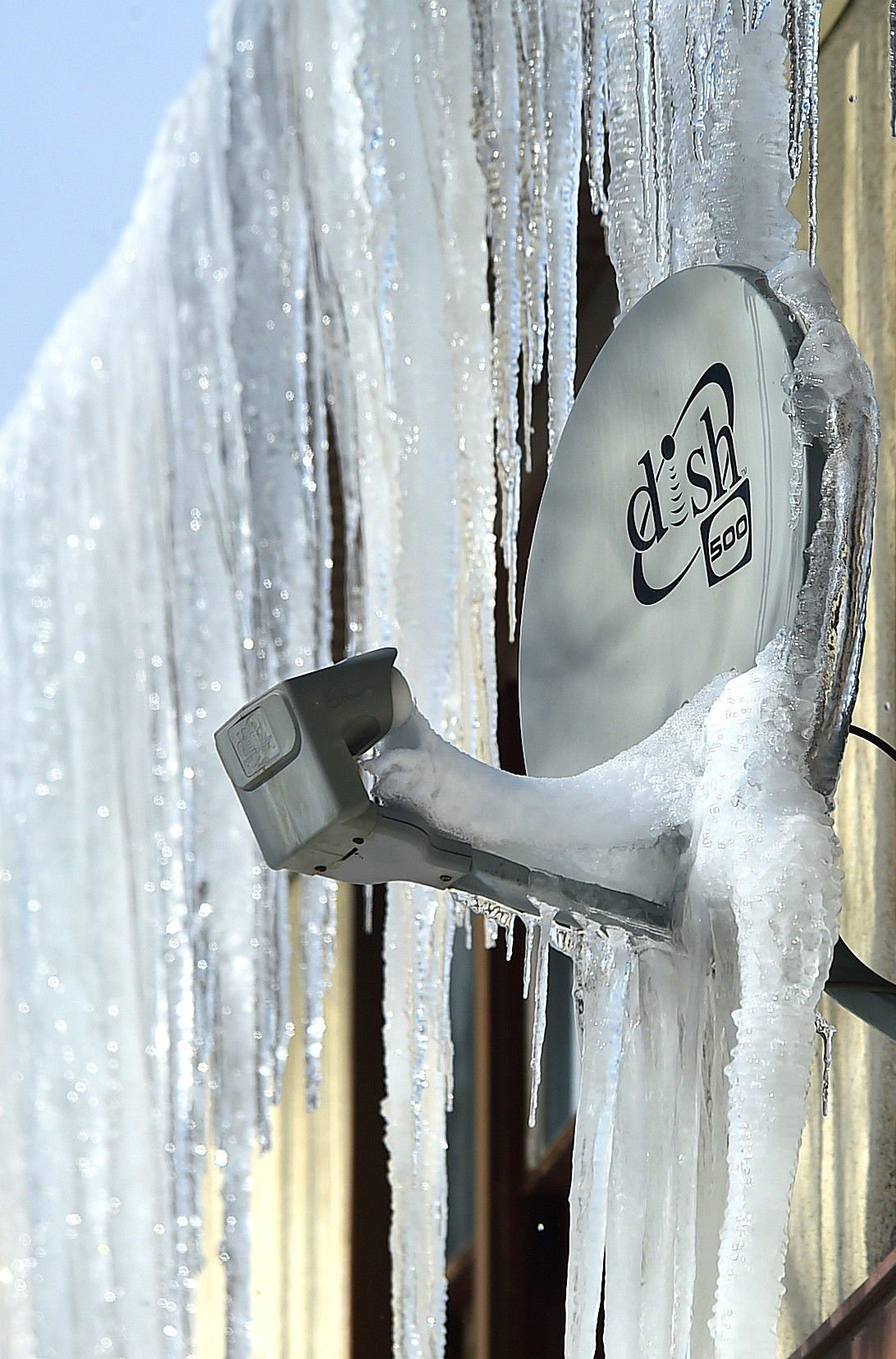 A satellite dish is covered with ice on Cedar Hall at MetraPark on Friday.

The shortest month of the year may have felt like the longest month with its consistently below-average temperatures. Even the thick blanket of snow couldn’t insulate from the frigid temps.

This February saw both the coldest and the warmest days of the year so far, and snatched second place for coldest February ever, coming in behind the record February of 1936, according to the National Weather Service in Billings.

Compared to January’s balmy daily average of 28 degrees, February’s 8.4 average seemed arctic. That average was 22 degrees below the normal average temperature in February.

The warmest day of the month was Feb. 2 at 52 degrees, and then after that little glimmer of spring hope, temperatures went straight downhill.

Saturday, Feb. 26 also marked the end of a three-week streak of days with a low temperatures of less than 10. The coldest day of the year was a bone-chilling minus 14 on Feb. 7.

And then there was snow. Lots and lots of snow.

This February saw just under 30 inches of snow in total, which was well above the average of 6 inches. It came in third for the snowiest February in 85 years. February 2014 beat 2019 by just 7 inches, and last year — the snowiest winter on record with more than 100 inches — saw 32.4 inches of snow, according the NWS.

“That’s pretty impressive,” said Arthur. “To be in that top three is very impressive.”

So far, March has felt warm. Friday saw a temperature of 19 degrees at 3 p.m., coupled with a sunny blue sky it felt like spring had sprung. Two hours later, winds had kicked up and a sheet of sleet and snow was pelting the Magic City.

Saturday's high is expected to peak at minus 4, with a low of minus 9. Then, Saturday night, it could go as low as minus 21, with wind chill as low as 40 below, Arthur said. That would break the current record low of minus 13 degrees.

Sunday will see a high of minus 2, and a nightly low of -18. A wind chill warning is in effect until Monday afternoon, Arthur said.

“It’s very dangerous,” she said. “Our main message is either to stay inside or cover all exposed skin. Frostbite can occur in just a few minutes.”

Just after 5 p.m. Friday, a storm system blew into Billings. NWS announced a storm front would blow through Billings, resulting in possible 30 mph winds, near whiteout conditions and rapidly freezing and icy roads. The storm is set to move southward after hitting Billings, according to NWS.

Warmer weather in the 20s and 30s is expected during the work week and going into the end of next week. However, a new storm system might bring some snow beginning on Wednesday, Arthur said. The amount of snow is too early to tell, she said.

Looking forward for March, Arthur said it’s too early to say anything definitively but the outlook is for less snow than we’ve been experiencing so far. Temperatures are still up for debate. She said it was an even chance that March could be colder or warmer than average.

Highway 191 from Harlowton to Eddie's Corner was closed just before 5 p.m.

Weather forecast not for the faint of heart: more of the same, only colder

Photos: A week of snow in Billings

The University of Montana has hired former Missoulian publisher and Lee Enterprises regional vice president Mike Gulledge as a consultant.

Wind chill reached 46 below zero in Billings; warm-up on the horizon

Tuesday morning, Billings could feel more than 20 degrees warmer than it did Monday, with a wind chill forecast around 20 below zero, accordin…

46 below zero in Elk Park, Montana, could be new statewide record for March

Elk Park reached a low of minus 46 degrees Monday morning. In addition to making Butte’s low of 30 below zero look like a heat wave, the reading could also be the lowest temperature recorded in state history during the month of March.

After back-to-back winters caused devastating cattle losses, Western state lawmakers are pushing for a better response from the U.S. Departmen…

GREAT FALLS — Hundreds of trees and flowering shrubs in a Montana city may die due to the past year's weather conditions.

As the sun slowly returns, let's focus on the beauty of winter around us

A week ago, six months after the sun began leaving us minute by minute, day by day, it started coming back.

From bitter cold to unheard-of fog, here were the most intriguing weather events of 2019, Billings meteorologists say.

Geronimo Gardner pulls his daughters Priseis, 6, and Sienna, 5, in a sled to school on 12th Street West on Friday morning.

A satellite dish is covered with ice on Cedar Hall at MetraPark on Friday.