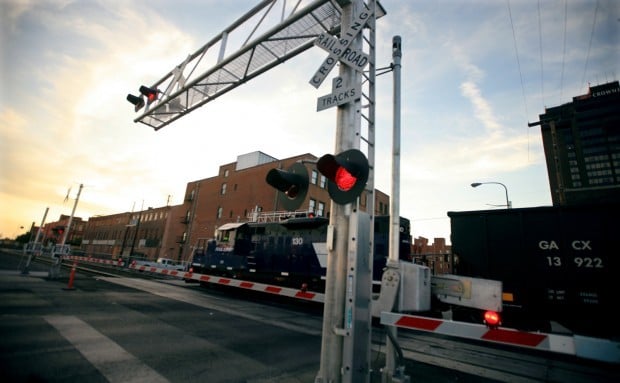 A train passes the intersection at North 27th Street, where a new pedestrian gate, at right, has been installed Wednesday, September 16, 2009. 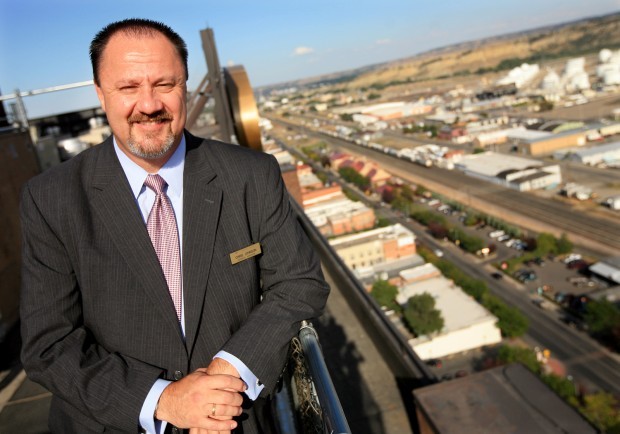 Chris Johnson, general manager of the Crowne Plaza, seen here on the hotel roof overlooking the railroad tracks, said the jarring sound of train horns has consistently been the No. 1 complaint of hotel guests. 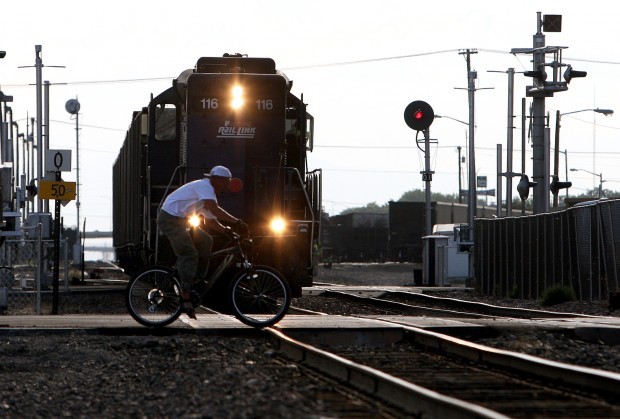 A bicyclist crosses the tracks in front of a train at North 28th Street Wednesday, September 16, 2009. 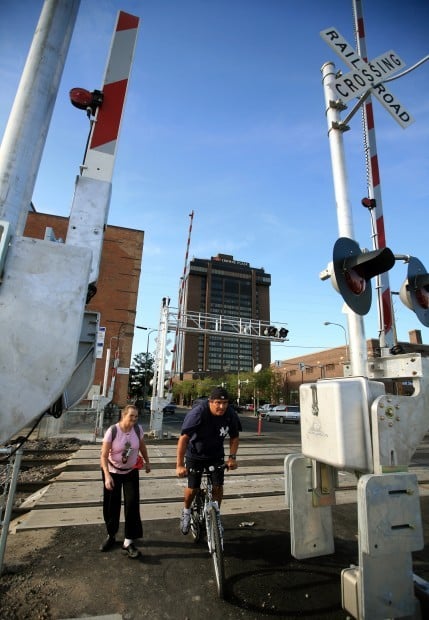 A pedestrian and a bicyclist cross the tracks at North 27th Street after a train passed through Wednesday, September 16, 2009.
ED KEMMICK Of The Gazette Staff

"I will be extremely excited to not hear the train whistle," Johnson said.

Many people who live, work or spend much time downtown were likewise looking forward to the "quiet zone" that was scheduled to take effect today, but few more eagerly than Johnson.

At the Crowne Plaza Hotel, where he is the general manager, "the No. 1 complaint is the train whistle," Johnson said. "It's 24/7."

Lynda Frost, a spokeswoman for Montana Rail Link, said trains traveling through downtown Billings were supposed to stop sounding their horns this morning, one minute after midnight. And those are some big horns, emitting blasts of 96 to 110 decibels, as per federal regulations.

A subway train, at a distance of 200 feet, registers at about 95 decibels, while 110 decibels is comparable to a power saw three feet away.

Harry Merchant, the director of St. Vincent de Paul, whose downtown thrift store is just yards from the railroad tracks, has been hearing the horns up close for 17 years.

"It's something we will be happy to have out of our lives," he said.

The quiet zone was pushed for six years by the Downtown Billings Partnership and ultimately involved the city of Billings, the state Department of Transportation, MRL, Burlington Northern Santa Fe Railway and the Federal Railroad Administration.

For the quiet zone to pass muster with the railroads and the Federal Railroad Administration, railroad crossings at north 27th, 28th and 29th streets had to be substantially upgraded. As part of the $1.47 million project, 24 vehicular and pedestrian gate arms, as well as new fencing and electronic equipment, were installed at the three intersections.

The improvements make it impossible for cars to weave through the gates anymore, and chain-link "pedestrian mazes" virtually force people to look up and down the tracks before crossing. The electronic equipment included underground sensors that control the arms and synchronize train movements with traffic lights on Montana Avenue.

Some of the last of the funds generated by the downtown tax increment district were used to pay for the project.

Greg Krueger, development director for the Downtown Billings Partnership, said the quiet zone is likely to spur new projects because old warehouses along the tracks are often ideal for residential and restaurant development. Once the general economy starts to improve, he expects to see a lot of activity near the tracks.

In Fargo, N.D., a much larger quiet zone went into effect 2 1/2 years ago, with noticeable results in terms of safety and economic development, said David Anderson, president of the Downtown Community Partnership there.

Anderson said Fargo and its sister city, Moorhead, Minn., spent $8 million to close or upgrade more than 20 railroad crossings in an urban area that sees as many as 85 trains a day.

"It was deafening. It was just unbelievable," he said.

Now, Anderson said, people who live downtown "will sleep through the night; they don't even know there's a train."

In addition to spurring more investment in downtown housing and businesses - including a bar that opened a patio with live music right next to the tracks - there has been a dramatic increase in safety, Anderson said.

In the six years or so before the quiet zone took effect, he said, Fargo-Moorhead saw nine fatalities or serious injuries involving pedestrians or vehicles hit by trains. In the past 2ƒ years, none has occurred, he said.

"It's worth doing it just because it makes it so much safer," he said.

And, though a few old-timers might miss the sound of the horns, Anderson said, "the lonesome whistle that was part of America" had little in common with "the ear-splitting, mind-numbing blast that comes out of trains nowadays."

Johnson, the Crowne Plaza manager, said the most frustrating thing about the horns was that it was almost the only customer complaint that the hotel couldn't do anything about. If there were vacancies, people could be moved to the relative quiet on the north side of the hotel, away from the tracks, but that was about it.

The quiet zone, he said, "is really going to bring value to the close-to-tracks businesses."

Even with the change, engineers will have the discretion to blow their horns in an emergency, when the warning devices aren't working or when a switch engine is backing up.

But, in the most common situation, when the trains are backing up, the engineers will only use three short blasts, as opposed to the two longs-one short-one long previously used by trains in transit, MRL's Frost said. And, while the trains won't use their horns passing through the downtown, they will still sound them at the crossing on Moore Lane, west of downtown.

Randy Hafer, an architect with offices near the tracks and a developer with a stake in several residential projects that are also near the railroad, predicted that the quiet zone "is going to have a real positive effect, and I think it's going to be almost immediate."

He said the downtown will quickly become more attractive when the train horns are no longer an issue. Even with the horns blaring night and day, he's had few problems with residential tenants near the tracks.

"Most people have dealt with it, but everybody will be happier without it," he said.

0 Comments
To celebrate the creation of the railroad “quiet zone,” the Downtown Billings Partnership is throwing a “last blast” party at the Western Heritage Center, 2822 Montana Ave., on Oct. 1.
Greg Krueger, development director for the partnership, said he will give out 400 little wooden train whistles that will be blown in unison to welcome the quiet zone. The gathering will run from 5 to 7 p.m. and will include wine, beer and food.

A train passes the intersection at North 27th Street, where a new pedestrian gate, at right, has been installed Wednesday, September 16, 2009.

Chris Johnson, general manager of the Crowne Plaza, seen here on the hotel roof overlooking the railroad tracks, said the jarring sound of train horns has consistently been the No. 1 complaint of hotel guests.

A bicyclist crosses the tracks in front of a train at North 28th Street Wednesday, September 16, 2009.

A pedestrian and a bicyclist cross the tracks at North 27th Street after a train passed through Wednesday, September 16, 2009.
© Copyright 2022 Billings Gazette, 401 N Broadway Billings, MT | Terms of Use | Privacy Policy
Powered by BLOX Content Management System from TownNews.com.
You don't have any notifications.