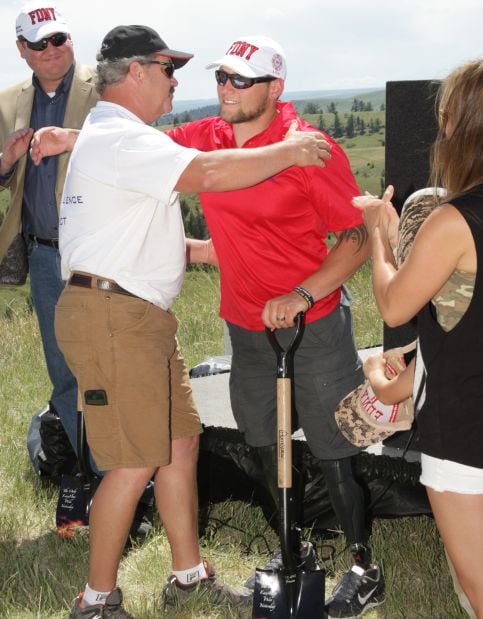 Don and Bo Reichenbach share a hug at the groundbreaking ceremony Saturday for Bo Reichenbach's soon-to-be-built smart home. A number of groups came together to donate the money and materials to build the home that will help Reichenbach, a former Navy SEAL who lost his legs to an IED in Afghanistan, live an independent live. 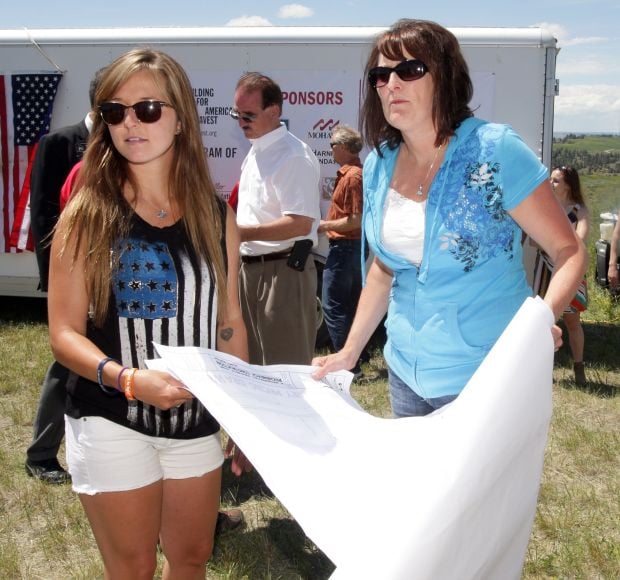 Lacy Reichenbach, left, and Judi Mjolsness look over floor plans Saturday at the groundbreaking for the Reichenbachs' new home. 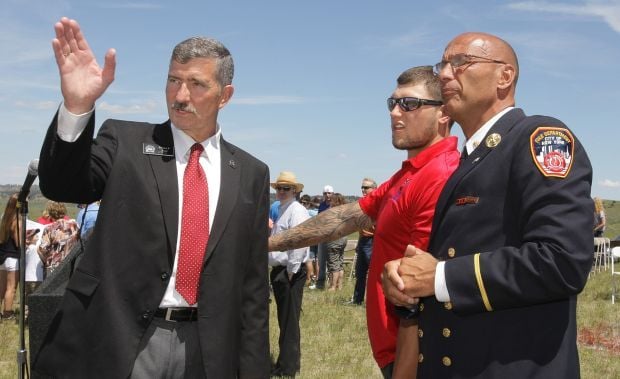 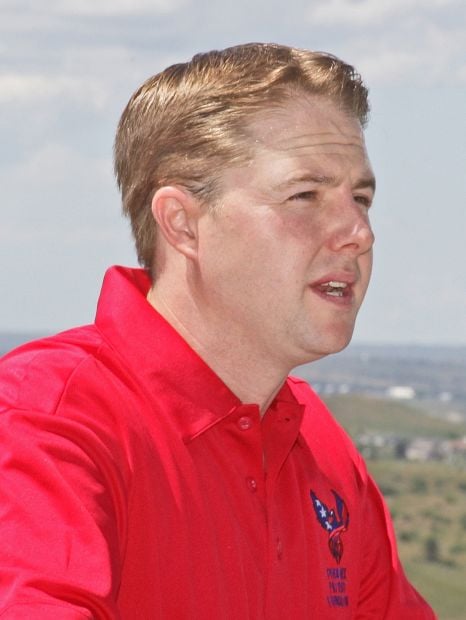 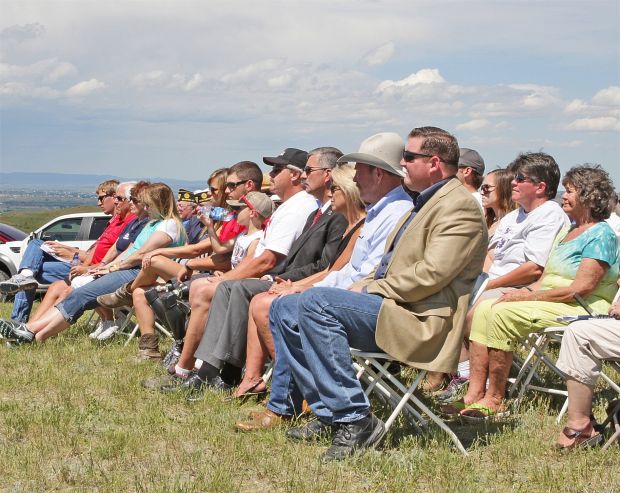 Guests sit on the home site at the groundbreaking for Bo Reichenbach's new home on Saturday. 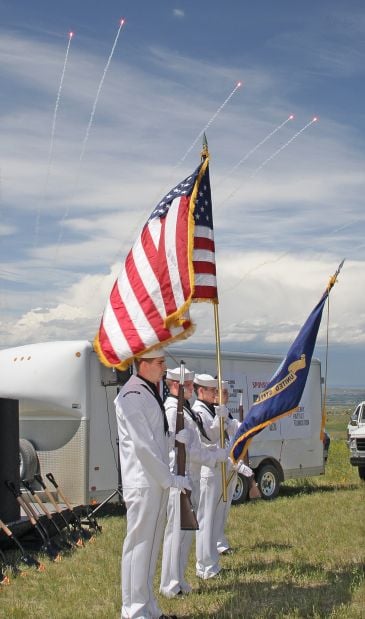 Fireworks explode in the air over the honor guard during the Star Spangled Banner, played at the start of the groundbreaking for Bo Reichenbach's new home.

On a high, grassy hill in Lockwood that boasts a panoramic view of five mountain ranges, Bo Reichenbach will soon rebuild another part of his life.

Reichenbach, a U.S. Navy SEAL who lost his legs to a makeshift bomb in Afghanistan in 2012, joined a crowd of people Saturday afternoon on the hill to celebrate the groundbreaking for his future home.

Construction will begin soon, and the house is expected to be done by this fall. Reichenbach Construction, owned by Bo's dad, Don Reichenbach, will be the general contractor on the project and Bo will be part of the team.

Reichenbach, 26, will share the home with his wife, Lacy, and their son, Landon, 6. The house will sit on 120 acres where, on a clear day, the family will enjoy a view of the Bull Mountains, the Beartooths, the Pryors, the Snowies and the Crazies, as well as the Billings area.

The smart home, which will make independent living easier, is possible thanks to hefty donations, including a $400,000 grant from the Stephen Siller Tunnel to Towers Foundation in New York City. Another $50,000 came from the Semper Fi Fund, and other businesses will donate materials and labor to the house.

The groundbreaking ceremony was co-hosted by the New York foundation and the Phoenix Patriot Foundation, which supports Reichenbach and other critically wounded veterans. Family, friends and project donors also were on hand for the invitation-only event that included a barbecue, the "Star Spangled Banner" and fireworks.

For all that Reichenbach has done for his country, building a home for him and his family is a small way to say thanks, said Jack Oehm, a retired battalion chief with the Fire Department of New York and director of the Tunnel to Towers Sandy Rebuild Program.

“This is the least we can do for these young men and women that sacrificed so much for us,” said Oehm, one of several people who spoke at the ceremony.

Reichenbach returned to Montana in May after nearly two years and more than 20 medical procedures at Walter Reed National Military Medical Center in Bethesda. He walks now with the use of two prosthetic legs.

Blake Bechtel, of the Phoenix Patriot Foundation, shared details of Reichenbach’s life with the crowd. Reichenbach enlisted in the U.S. Navy in March 2008 and became a SEAL in May 2010.

He deployed to Afghanistan on Jan. 1, 2012, Bechtel said. Seven months into the deployment, on July 17, 2012, Reichenbach stepped on a 20-pound improvised explosive device and lost both his legs above the knee.

His right arm also was severely injured, and he sustained a hearing loss in both ears.

Reichenbach will retire from the Navy in a ceremony in July. There, he will be awarded the Bronze star of Valor, one of the nation’s highest honors.

“After retiring from the Navy, he will return home to Billings, where he will return to working alongside his dad at the Reichenbach Construction Co. and enjoy raising his family on this beautiful property,” Bechtel said.

He explained that former U.S. Navy SEAL Jared Ogden started the Phoenix Patriot Foundation in 2010. A year before, a close friend and fellow SEAL had lost both legs to an IED.

Ogden saw the types of support that helped his friend, and also saw needs that went unmet. So he left the Navy and started the nonprofit.

When Reichenbach suffered injuries nearly akin to those Ogden’s friend had sustained, Ogden made Reichenbach’s care a top priority.

“Immediately we started discussing the vision for his home and seeing whatever we could do to support him,” Bechtel said.

Janine Cante of the Semper Fi Fund said Reichenbach is one of many people Semper Fi has been able to help since its creation in 2004. The fund has given about 11,800 grants to service members and their families, totaling $92 million, to help with family support at the hospital, vehicle grants and especially adaptive-housing grants.

“I wanted to thank Bo for his service to our great nation and just wish him years of happiness in this soon-to-be constructed home,” Cante said.

Paola Tornabene, vice president for corporate affairs for Tunnels to Towers, explained that the foundation’s mission is to honor the legacy of Stephen Siller a New York City firefighter who perished on Sept. 11, 2001.

“Our goal is to honor Stephen by providing continued support to first responders and to military heroes,” she said.

Oehm added that too many people in the U.S. take for granted what military men and women do for their country day in and day out, he said.

“We honor those who can shoot a basket, who can hit a golf ball, who can run fast and jump high, and meanwhile we forget about our veterans coming home that are catastrophically injured,” Oehm said. “So what our foundation does is to honor their sacrifice and to remember Stephen’s sacrifice on that day.”

When Bo Reichenbach came to the microphone, he grew emotional when he spoke of his thanks for the home and all the support he has received.

“I just want to say thank you," he said, pausing a moment. "It means a lot to our family to be able to have this."

Afterward, he thanked his family “for always being there and supporting me.” Don Reichenbach shut down his business for six months in the beginning to go and stay with his son, Bo Reichenbach said.

Building a house has always been a dream of his, he added.

“I am afforded the opportunity sooner than I wanted to, but due to the circumstances this is where we’re at today and we’re happy to be able to build our own home now,” he said.

Father and son embraced after the groundbreaking. The two have worked together ever since Bo was 12 years old, Don Reichenbach said.

During his time at the hospital with Bo, Don said the two looked forward to what would come next.

“That’s all we talked about is we can still do everything that we want to do, we just do it a little differently,” he said. “And so we’re gonna get this house built for him.”

For close to five hours, Bo Reichenbach had stayed prone against the cold earth while watching for movement in the valley below. It was the seventh day of a scheduled six-day elk hunting trip in the Big Belt Mountains and the fatigue had settled deep into each and every one of them.

Students at Will James Middle School gathered Monday to listen to a wounded veteran tell his story of service in Afghanistan.

Don and Bo Reichenbach share a hug at the groundbreaking ceremony Saturday for Bo Reichenbach's soon-to-be-built smart home. A number of groups came together to donate the money and materials to build the home that will help Reichenbach, a former Navy SEAL who lost his legs to an IED in Afghanistan, live an independent live.

Lacy Reichenbach, left, and Judi Mjolsness look over floor plans Saturday at the groundbreaking for the Reichenbachs' new home.

Guests sit on the home site at the groundbreaking for Bo Reichenbach's new home on Saturday.

Fireworks explode in the air over the honor guard during the Star Spangled Banner, played at the start of the groundbreaking for Bo Reichenbach's new home.