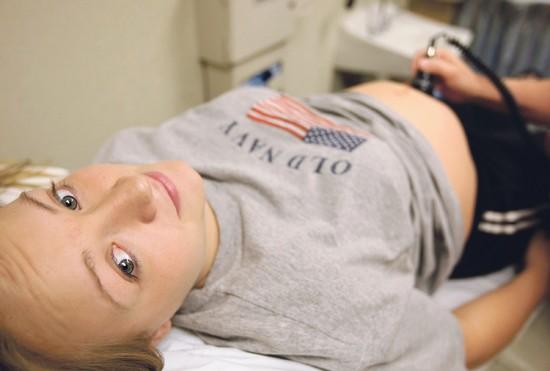 Natasha Batt listens to the heartbeat of her baby during a recent doctor's appointment at Billings Clinic. The 17-year-old has found a family to adopt the baby after its birth in January. 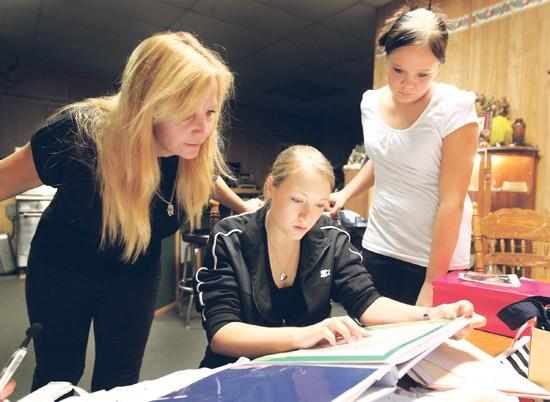 Liz Freeman and her daughters Natasha, 17, and Mikala, 14, look at a photo album given to Natasha by the couple who plan to adopt Natasha's baby. Liz placed a baby for adoption when she was a teenager and supports Natasha's decision to do the same. 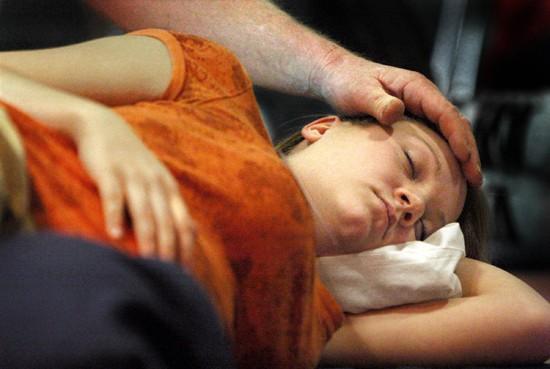 Jeff Hagel smoothes Natasha's hair while she practices relaxation techniques during her birthing class at Billings Clinic. Natasha considers him a father, and he and her mother, Liz, will help her during the baby's delivery. 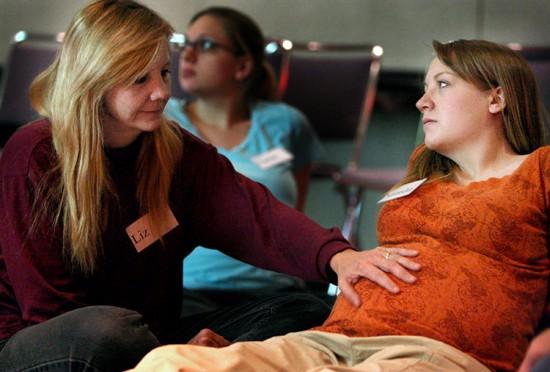 Liz Freeman and her daughter Natasha Batt attend a Welcome Baby class at Billings Clinic. When the delivery comes, Liz will be the birthing coach. The mother and daughter alternated between tears and giggling during the class.
{{featured_button_text}}
1 of 4

Natasha Batt listens to the heartbeat of her baby during a recent doctor's appointment at Billings Clinic. The 17-year-old has found a family to adopt the baby after its birth in January.

Liz Freeman and her daughters Natasha, 17, and Mikala, 14, look at a photo album given to Natasha by the couple who plan to adopt Natasha's baby. Liz placed a baby for adoption when she was a teenager and supports Natasha's decision to do the same.

Jeff Hagel smoothes Natasha's hair while she practices relaxation techniques during her birthing class at Billings Clinic. Natasha considers him a father, and he and her mother, Liz, will help her during the baby's delivery.

Liz Freeman and her daughter Natasha Batt attend a Welcome Baby class at Billings Clinic. When the delivery comes, Liz will be the birthing coach. The mother and daughter alternated between tears and giggling during the class.

In the waiting room at Billings Clinic downtown, Natasha Batt sits in a pink chair with her legs crossed, bouncing her puffy foot in a flip-flop. The appointment is just a routine checkup for her but not for many teenagers.

Natasha, 17, is pregnant and waiting for her fourth prenatal visit. Her black hooded sweatshirt is on her lap in an unconscious effort to cover her rounded belly.

Natasha is a senior at Huntley Project High School and found out she was pregnant in July. With the love and support of family, she made one of the most difficult decisions of her life - a decision that's forced her mother to consider her past again with new perspective.

She wears sweat pants because the idea of buying maternity clothes is too overwhelming. Besides, she's not even used to saying the word "pregnant."

"I find pregnant the word that is the most awkward to say - even right now I hate saying I'm pregnant," she said.

As her belly has grown, she has had to make the announcement less often.

When the nurse calls, Natasha walks down the hall without a glance at the dozen or so bulletin boards covered in snapshots of happy couples, cradling pink- and blue-clad newborns. Someone else will be smiling for a photo with the baby boy growing inside Natasha.

In the doctor's office, the nurse places a microphone on Natasha's belly. The machine hisses and produces a muffled sound like water rushing, lapping against a board. Natasha relaxes, listens awhile and closes her eyes. The baby's OK, and that's all she really wants to know. As the nurse moves the microphone, the heartbeat gets louder, and Natasha smiles.

The doctor asks her if she has any questions. She doesn't, and he hands her "28 Weeks," a folder of colorful papers with information on pregnancy and a guide to nursing. It is written for mothers whose babies will go home with them.

Several years before Natasha's pregnancy, her mother, Liz Freeman, talked to her about sex, birth control, abortion and sexually transmitted diseases. Natasha was young, maybe 11 or 12, but her mother was determined to catch her before she learned about sex in locker rooms and at slumber parties.

At the end of their conversation, Natasha asked her mother what she should do if she became pregnant.

When it seemed to Natasha that the time was right, the two of them went to Planned Parenthood to explore birth control options. Natasha struggled to find a method that didn't disrupt her cycle. It was while trying different brands and types of birth control that she became pregnant.

Changes in her body and occasional morning sickness had her worried she was pregnant, but several pregnancy tests were negative. She knew something wasn't right and took one more. Positive.

Natasha was home when she found out. She ran to her mother's room and handed her the pregnancy test. It said "pregnant" in the little plastic window. Enough said.

Liz gripped her in a tight embrace.

A mother who understands

Natasha's mother was pregnant when she was 15. She knows the heartache, loneliness and shame of teen pregnancy. She knows what it does to a girl's body and the confusion that can cause. She chose to place her baby up for adoption.

"I know what it takes to make that decision and the strength it takes to follow through," Liz said. "Everything inside of you, you don't want to do it."

Even though it was almost 30 years ago, Liz could have chosen an open adoption, but she knew herself. Contact with the baby and the family would be agonizing, she thought. She had only one stipulation in her search for parents. She wanted the baby to have a stay-at-home mom, at least in the baby's early years. A teenager, attending high school and maybe college in her future, she knew she wouldn't be able to spend as much time with the baby as she knew it needed.

Liz, then 15, squeezed her eyes shut at the final push during delivery and broke down in tears before asking if the baby was OK. She was. And that was the last Liz would know of the baby for a year.

She didn't know that it was a girl until a year later, when she mustered the courage to contact the adoption agency. They told her the girl was happy, healthy and living with a Montana family on a ranch. She learned to walk before she was a year old.

Liz lives with the sometimes-painful loss of a child, but she is at peace with her decision.

"I can guarantee, you're not doing it for yourself because it tears you up - you do it for them," Liz said.

Today, the girl would be 28. She may not know she was adopted, but if she does, Liz's adoption records are open. The woman could contact her mother anytime, but hasn't.

In Natasha's life, the concept of family has never been conventional.

Liz has known her fiancé, Jeff Hagel, since childhood, but the two haven't always been a couple. Both were previously married. Natasha, who no longer has contact with her birth father, considers Jeff her dad.

When Natasha counts her siblings, she taps the fingers on her right hand one at a time, then taps all the fingers of her left hand on the edge of the table top before starting over on her right hand. Full-blood related siblings, half sisters, children born to Jeff in his first marriage and Liz's firstborn that she placed for adoption - the number comes to 12. Four children live at home with Liz and Jeff. Natasha is the second-oldest. Her older sister Katherine Brackett, 20, lives in the Heights. Natasha's younger sister Mikala, 14, is a bubbly eighth-grader at Huntley Project. Marshal, 11, and Landen, 9, are the youngest.

All their lives, Liz's children have known they have an older sister who was placed for adoption.

"We go extended family," Liz said. "Family is family, and it doesn't take blood to be family."

Natasha has a tattoo on the top of her right foot that says "Family Forever." Katherine and one of Jeff's daughters have the same tattoo. It's an upside-down, mirror image. From her perspective it spells "family." From anyone else's it says "forever."

Liz, Jeff and Katherine will join Natasha in the delivery room when the baby is born, and together, they're taking a "Welcome Baby" class at Billings Clinic, which offers expecting parents relaxation and labor techniques. The class has brought a sense of reality to the family's situation. During the class, they've flown from tears and hugs to laughter and playful pillow fights.

At first, Natasha could picture herself as a young mother. She loved taking care of her younger brothers, and as Liz puts it, she's "a nurturer." The timing of the pregnancy was less than perfect, but Natasha decided she was up for motherhood, ready or not. She would do whatever it took, and when she told her parents she planned to keep the baby, they committed to do the same. More now than ever, they told her, she needed to go to college.

She let herself get excited and shopped for baby clothes, bought a stroller, wondered if it was a boy or a girl and dreamed like every mother does.

But then one day, she was standing in the shower and reality hit. With school, homework and a part-time job, when would she find time to be a mother? Would she ever have the money to buy everything the child needed? What about the life experiences that help parents make good decisions? Time, money, experience - she didn't have any.

"That's just so not fair to a kid," she said. "This kid deserves more."

She decided she would place the baby for adoption and hasn't wavered in her decision since.

The baby's father left before Natasha found out she was pregnant, and although Natasha informed him of her pregnancy, he hasn't expressed an interest in fatherhood.

Natasha explored local adoption agencies, but before choosing one she was contacted by distant family friends who had heard of her decision. Other than to say they live in a small Wyoming town, Natasha wants to honor their privacy until the baby is born.

She had never met them, so they sent her letters and a photo album to introduce themselves.

"I opened the front page and it was done right there," she said.

The book starts with a letter from the baby's mother and one from the baby's father. The conversational tone of the letters, their typos and misspellings, all gave Natasha an instant feeling of relief and joy.

"I hate perfect. Nobody's perfect, and if you try to be perfect it just makes you seem desperate," Natasha said.

The album included pictures of the couple's dogs, cats and horses, photos of their wedding day and a picture of the baby's grandparents dancing.

"They're not afraid to have fun," she said. "I want this kid to be raised that way - the way I was raised."

Could you pass a US civics test?