About a mile east of Big Timber three crashed semis blocked lanes of eastbound I-90 traffic Sunday morning, according to the Montana Department of Transportation.

The crash was one of several reported on central Montana highways since 11 a.m. Sunday.

Another crash, also involving three semis was reported on U.S. Highway 191 north of Harlowton. That crash, at mile marker 12.5, created a full blockage of the roadway, according to MDT. The road became fully blocked at 11:03 a.m.

Severe driving conditions including slush, scattered slush, ice, black ice, and blowing and drifting snow have been reported from Melville to Harlowton.

The Wheatland County Sheriff's Office announced at about 12:30 p.m. that U.S. Highway 191 North was closed due to multiple slide-off crashes and accidents.

Just after noon, the National Weather Service in Billings in a social media post urged drivers to be aware of changing conditions from Reed Point to Livingston and from Big Timber to Harlowton.

Those changes would begin "over the next few hours," NWS Billings reported at 12:09 p.m.

"High winds are causing snow to blow over the road, creating black ice and blowing/drifting snow," the weather service announced.

Commercial and towing vehicles are also encouraged to use caution due to high winds in the Livingston area that began at 11:06 a.m. Sunday. The weather service expects those winds to gust in excess of 75 mph from 6 p.m. Sunday to 9 p.m. Monday.

Drivers should expect crash-related delays and single lane traffic, according to MDT.

Road conditions near the crash were described as slush and scattered slush with reduced visibility caused by blowing and drifting snow.

Generally the strongest winds are expected Sunday night into Monday.

For Judith Gap, Big Timber, Melville and Harlowton 60 to 70 mph west winds could be seen until 5 a.m. Tuesday. The strongest winds are expected Sunday night into Monday.

Around the towns of Roundup, Hysham, Colstrip, Forsyth, Ryegate, Lavina, Custer and Pompeys Pillar winds could gust between 60 and 65 mph from 10 p.m. Sunday until 6 p.m. Monday. The strongest winds are expected to hit those areas early Monday.

Towns including Columbus and Absarokee could see west winds gusting between 60 and 70 mph until 5 a.m. Tuesday, with the strongest winds Sunday night into Monday.

Wind wreaked havoc for a second day in Billings, as the National Weather Service reported that a 63 mph wind gust was recorded at the Billings… 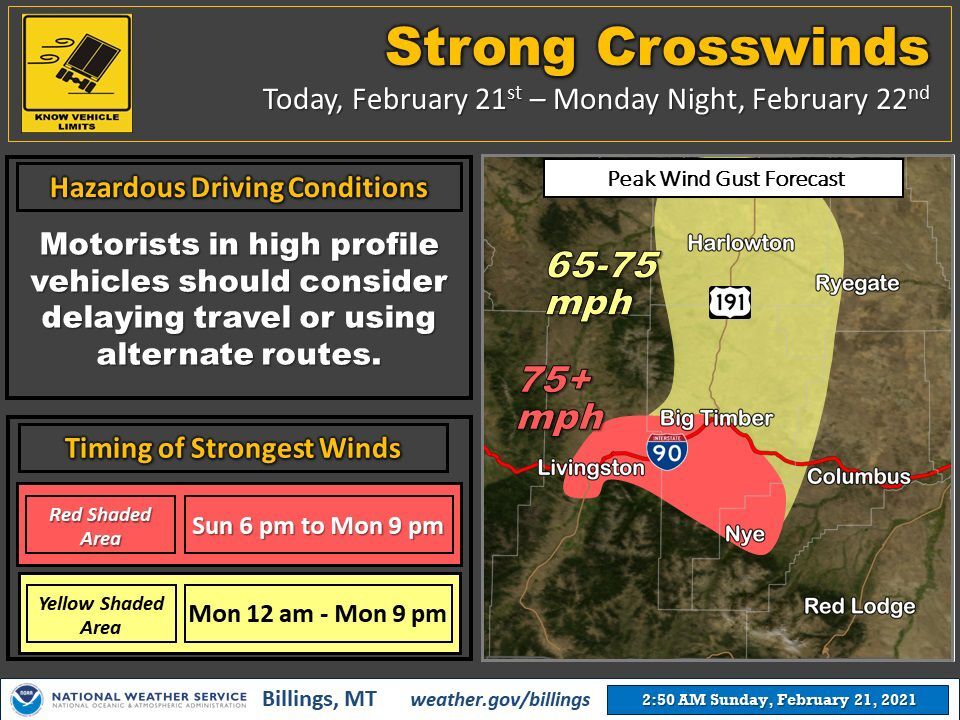 Areas where strong crosswinds are possible from Sunday into Monday night. The National Weather Service in Billings is warning of gusts in excess of 75 mph. A high wind warning was issued Sunday for parts of central and eastern Montana. 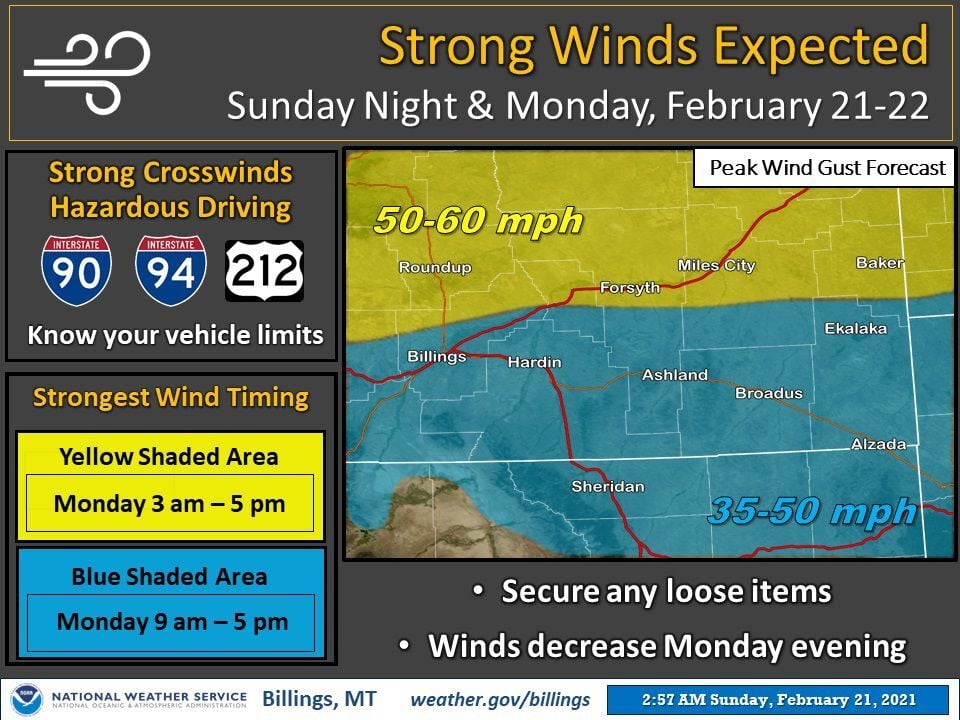 Strong winds are expected across portions of central and eastern Montana Sunday into Monday. The National Weather Service in Billings has issued a high wind warning and has additionally warned of strong crosswinds that could lead to difficult travel conditions, especially for high-profile vehicles.