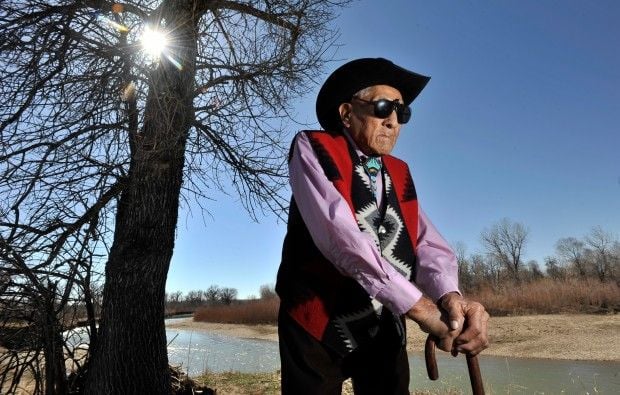 Joe Medicine Crow died in Billings Sunday morning at the age of 102. 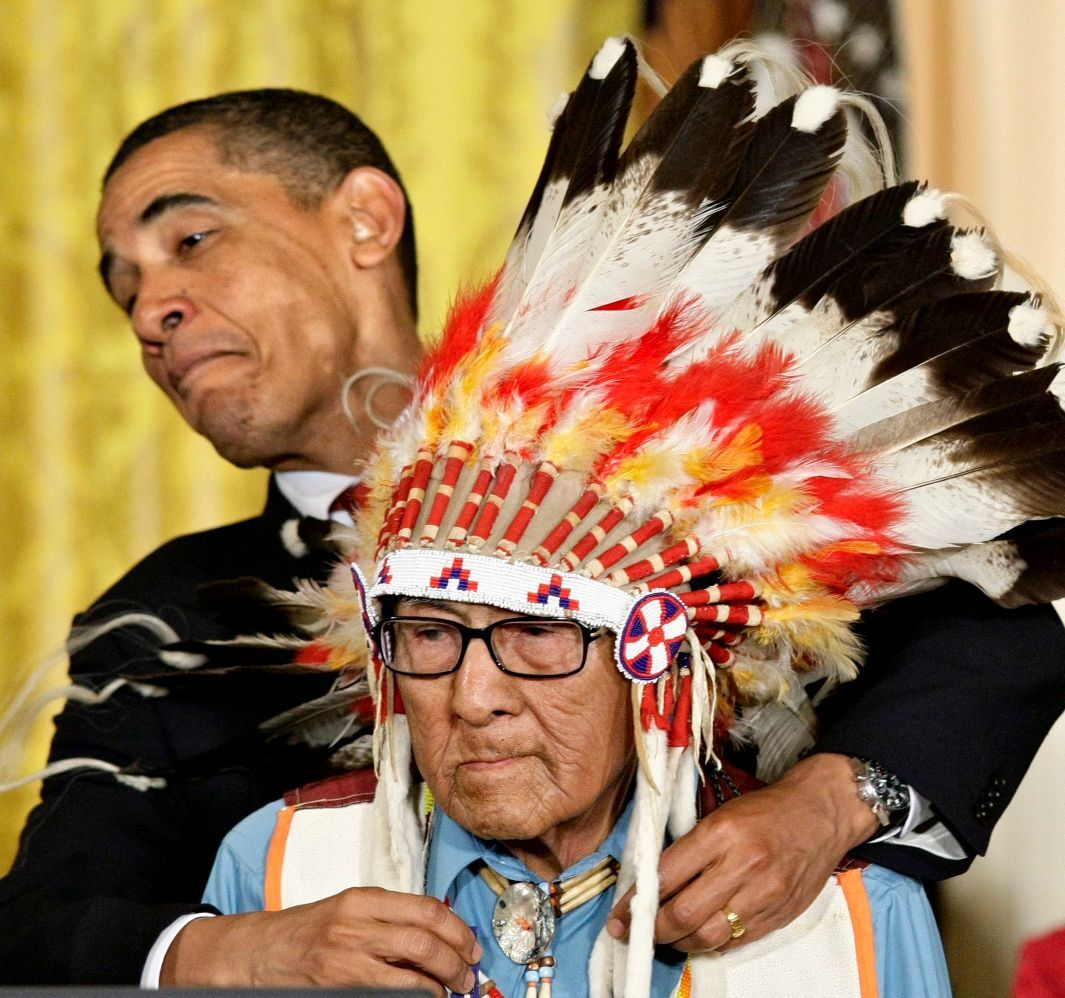 President Barack Obama presents the 2009 Presidential Medal of Freedom to Joseph Medicine Crow during ceremonies at the White House in Washington, Wednesday, Aug. 12, 2009.  Medicine Crow died on Sunday, April 3, 2016, in Billings at age 102. 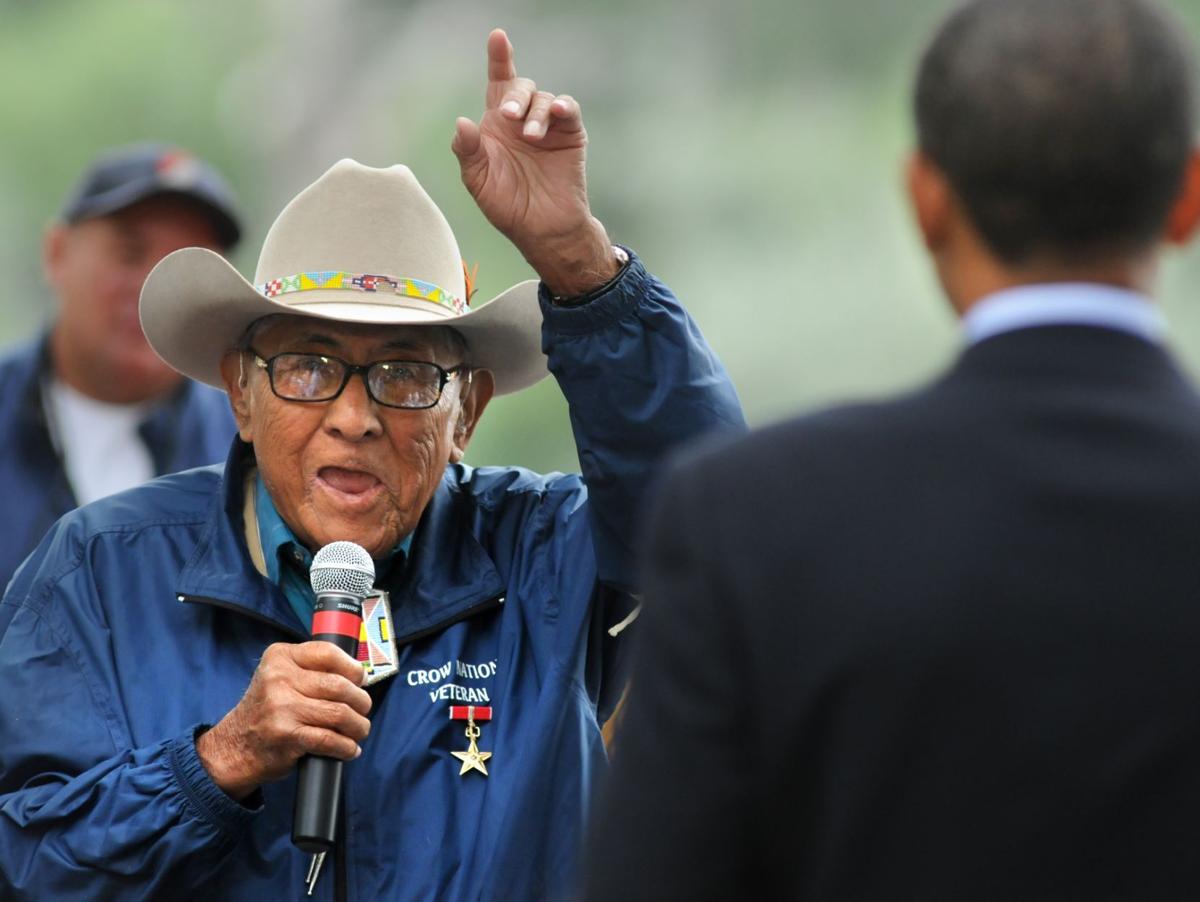 Crow historian and WWII veteran and Bronze Star recipient Joe Medicine Crow told Barack Obama in 2008 to "take veterans to the top when you move into the White House." 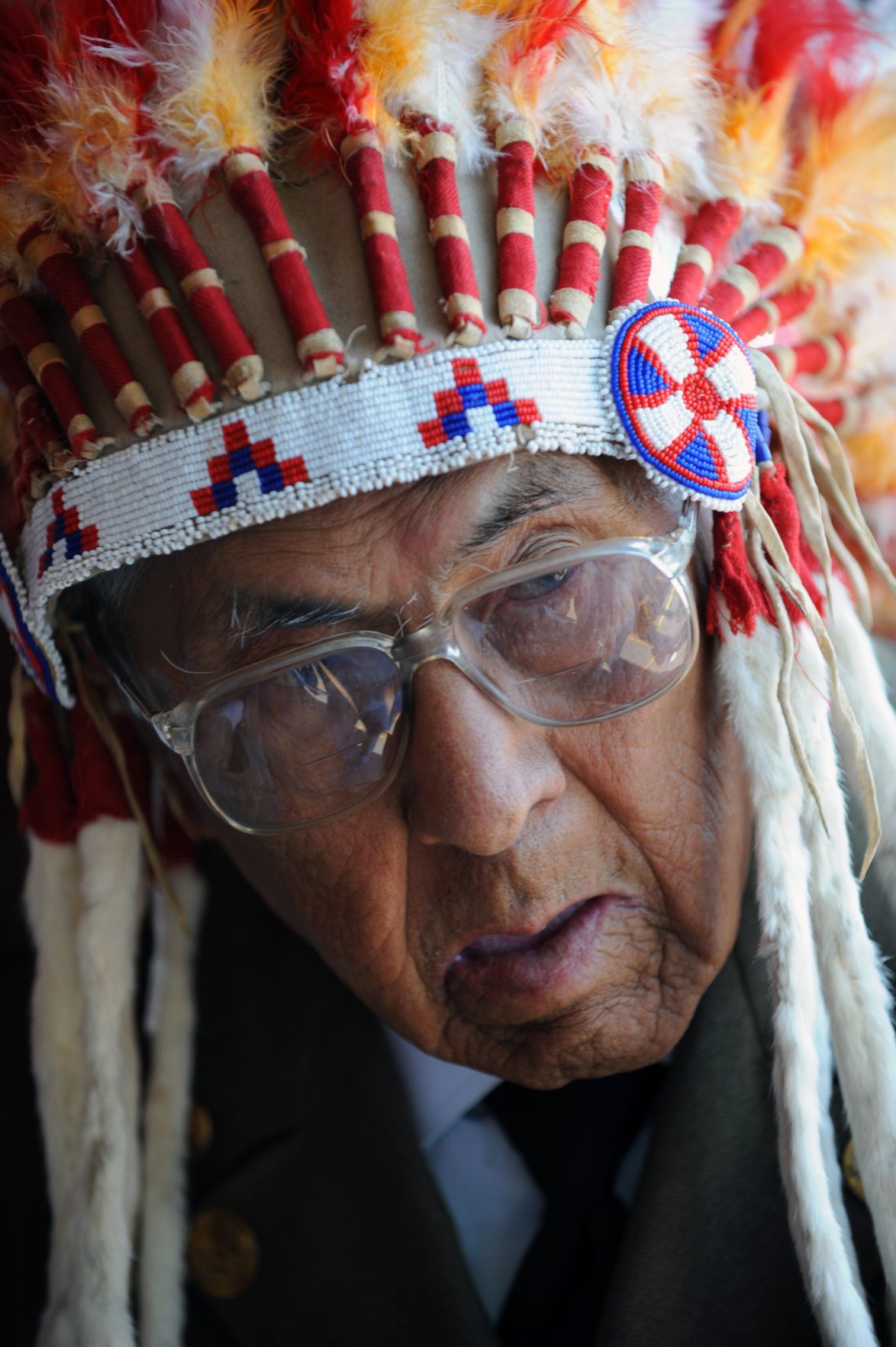 Crow historian Joe Medicine Crow listens to speakers during his ceremony to receive the Bronze Star in 2008. 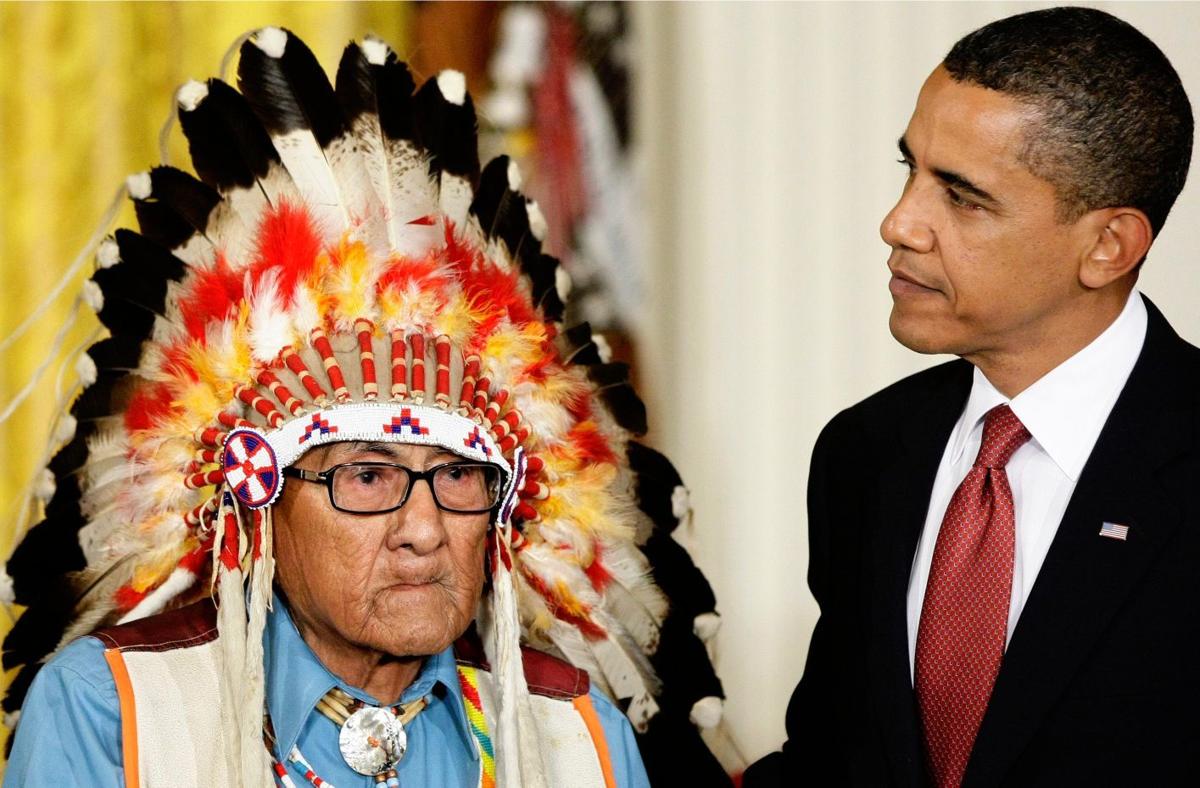 President Barack Obama presents the 2009 Presidential Medal of Freedom to Joseph Medicine Crow during ceremonies at the White House in Washington, Wednesday, Aug. 12, 2009. Medicine Crow died on Sunday at 102. 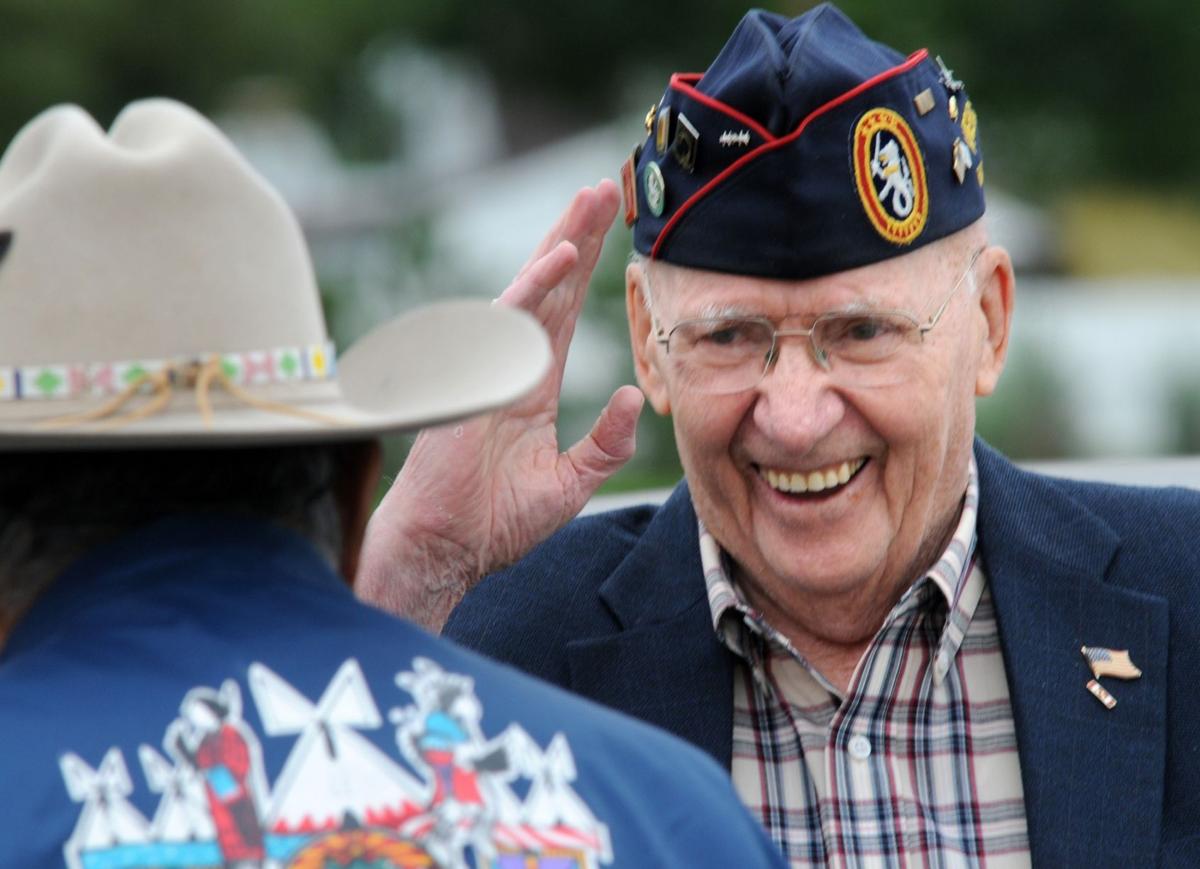 Ben Steele, right, a survivor of the Bataan Death March, and fellow WWII veteran and Bronze Star recipient, Joe Medicine Crow, salute each other before Barack Obama's speech on Aug. 27, 2008.

By MIKE FERGUSON and JORDON NIEDERMEIER

Medicine Crow, 102, was the last Crow war chief as the result of his military accomplishments. He was awarded the Presidential Medal of Freedom, the highest honor awarded to a civilian in the United States, by President Barack Obama in 2009.

He received numerous honorary doctorate degrees from universities around the country and a Heights middle school set to open in the fall was named in his honor.

“He was my everything,” his son Ronald Medicine Crow said. "I don’t think I will be able to fill his boots because he was able to accomplish so much in his history.”

"Joe was a true American hero," said Darren Old Coyote, chairman of the Crow Tribe."He was a great man in two worlds," he said.

School District 2 Superintendent Terry Bouck remembered Medicine Crow as “a patriot, scholar and the recipient of the Presidential Medal of Freedom. Billings Public Schools is proud to honor Dr. Medicine Crow by naming the new Heights middle school after him. Medicine Crow’s ‘new house of learning’ will open in his honor in August.

The “new house of learning” was the moniker that Medicine Crow himself bestowed upon the middle school.

During a March 2015 groundbreaking at the school, Medicine Crow was presented a blanket, which was draped over his lap as he addressed the crowd in Apsaalooke and English.

“Billings is, like me, getting older,” Medicine Crow said at the time. “But also, like me, better.”

He called Billings his “second town,” a town he’d been returning to for a century.

Ben Steele, the other World War II veteran who will have a Billings middle school named in his honor, called Medicine Crow "a hero, a great educator and historian. He was a fine example and leader of his people."

The family is planning funeral services, and Old Coyote said the tribe will likely also hold a tribute after talking with the family.

“Our prayers go out to the family,” he said. “He’s a true inspiration to the people.”

Born Oct. 7, 1913, Medicine Crow was the official Crow Tribe historian. He was a Crow war chief, having completed the required four war deeds while serving in the Army during World War II.

Those deeds included leading a war party, touching the first fallen enemy and stealing his weapon, and entering an enemy camp and stealing horses.

“I never got a scratch,” he recalled about 60 years later.

The warrior tradition is deep-rooted in Crow culture. Medicine Crow told The Gazette that a great warrior, No Vitals, had a vision that the Crow people would have to be strong to fend off the other tribes and white men, who would try to take their good land.

"The great spirits said, 'I am going to make you warriors, strong and cunning,'" Medicine Crow said in 2006. "Kids train to be warriors right from toddlers. We were a war-faring people."

But Medicine Crow was also a man of peace. Old Coyote attended the Millennium World Peace Summit in New York with Medicine Crow in 2000, where they represented the elders and the children of the Plains tribes.

He was an accomplished athlete, could play five instruments and was an avid basketball fan.

“He never missed a game,” Old Coyote said. “That goes to show his support for the community, the young people and the Crow people.”

“Dad was one of the fortunate few to go on to college,” he said.

He received his bachelor’s degree from Linfield College in McMinnville, Ore., after beginning his studies at Bacone College in Muskogee, Okla., in 1928. He earned his master’s degree from the University of Southern California in 1939, the first Crow tribal member to earn a graduate degree.

“He was my role model, a trailblazer in his own right. He set the pace for others to emulate what he was doing,” Ronald Medicine Crow said.

He said that he’s met many people from his generation and others who have gone on to further their education because of his father.

“A lot of graduates have said that my dad was an inspiration to not stop their education and to go on to college,” he said.

Belgrade artist Ben Pease, who painted Medicine Crow in 2015, posted this farewell on his Facebook page: "To hear of an elder passing always takes a little more out of you. Grandpa Joe Medicine Crow: You've given us all so much to live by, learn from, and teach to new generations! Enjoy your journey to the Other Side Camp."

Greta Besch Moen, chair of the School District 2 board of trustees, said a quote written years ago about Medicine Crow — “he had a fixed resolve not to quit,” an homage to his military record — is as relevant now as it was then.

“What a great legacy for our students — to emulate his fixed resolve never to quit,” she said.

In 1939, he was working toward his doctorate in anthropology from the University of Southern California when he saw a flier seeking extras to be in a new movie about the battle of Lt. Col. George Custer’s last stand. Medicine Crow immediately volunteered for the project, called “They Died with their Boots On.”

The director assigned Medicine Crow to the script-writing department, which Medicine Crow didn’t care for, “but they were paying good money.”

He was later fired for saying that Custer “jumped the gun and got 265 soldiers killed.” Medicine Crow told the producer that the movie was messing up an important part of history. About 25 years later, he wrote his own version of what happened in the battle.

A respected and often-published historian, Medicine Crow wrote the script for the re-enactment of the Battle of the Little Bighorn.

Telling stories was something that Ronald Medicine Crow said he grew up with.

“He was a great storyteller and we really gleaned a lot from his knowledge,” he said, “and I appreciate that’s something he instilled I me.”

Ronald Medicine Crow said his father’s goal in publishing his books was to help teach the younger generations about history, something about which he was passionate. Medicine Crow spent time as a boy helping in the sweat lodge, where he’d pick up stories.

“He had a lot of irons in the fire, so his time was limited,” Ronald Medicine Crow said. “But he made the time to start writing all the stories he heard as a boy.”

Medicine Crow worked for the Bureau of Indian Affairs for 32 years, and earned a number of honorary doctorates from such varied places of higher education as Rocky Mountain College and USC.

As a BIA land appraiser, he wore a tie and sports jacket to work and “after 5 o’clock, I’d turn into an Indian,” Medicine Crow said. “I live in two worlds, and I enjoy them.”

In 2002, he told The Gazette that his saddest agricultural memory is one that broke the heart of the Crow people. Farmers complained that Indian ponies were eating up all their grass, and in about 1920, the Bureau of Indian Affairs superintendent ordered the roundup of all Indian ponies on the Crow, Northern Cheyenne and Wind River reservations. Many roamed across the reservation, often unbranded.

Ranchers’ cowboys killed the wild horses and received government pay of $4 per pair of ears cut from the ponies.

“Some Indians did it for a while, too,” Medicine Crow said. “But the government only gave them $2 each pair, and then the elders told them to ‘Stop that. These are your brothers,’ so they did.”

Finally, the government called a halt. Officials said 44,000 horses were killed, “but it was way more than that,” Medicine Crow said.

It was that tragedy — followed by opportunists hauling wagon loads of horse bones to Billings fertilizer plants — that helped turn Crow people away from farming, he said.

In the end, Medicine Crow attributed his and tribal accomplishments to keeping a long-term perspective.

“The government tried their best to transform (Crow) people into the ways of the white man,” Medicine Crow said. “Yeah, they tried, all right. But we had what you might call cultural persistence.”

WATCH NOW: Bruce Miller sits down to talk with Oscar nominee Diane Warren about her success

Services have been set for Joseph Medicine Crow, the noted Crow war chief, historian and World War II hero who died Sunday at the age of 102.

Joe Medicine Crow funeral: There is no Crow word for 'goodbye'

Joseph Medicine Crow died on Sunday in Billings at age 102.

CROW AGENCY — Seven years ago following a near-fatal automobile collision, Warren Stevens was told that although he was lucky to be alive he m…

It was a historic first day of school at Medicine Crow Middle School.

TWIN BUTTES, N.D. — An 85-year-old man said to be the last fluent speaker of the Mandan language has died.

Justice John C. Sheehy, known to friends as Skeff, had a golden tongue, and it served him best on the day he was held at gunpoint in his state…

Joe Medicine Crow died in Billings Sunday morning at the age of 102.

President Barack Obama presents the 2009 Presidential Medal of Freedom to Joseph Medicine Crow during ceremonies at the White House in Washington, Wednesday, Aug. 12, 2009.  Medicine Crow died on Sunday, April 3, 2016, in Billings at age 102.

Crow historian and WWII veteran and Bronze Star recipient Joe Medicine Crow told Barack Obama in 2008 to "take veterans to the top when you move into the White House."

Crow historian Joe Medicine Crow listens to speakers during his ceremony to receive the Bronze Star in 2008.

President Barack Obama presents the 2009 Presidential Medal of Freedom to Joseph Medicine Crow during ceremonies at the White House in Washington, Wednesday, Aug. 12, 2009. Medicine Crow died on Sunday at 102.

Ben Steele, right, a survivor of the Bataan Death March, and fellow WWII veteran and Bronze Star recipient, Joe Medicine Crow, salute each other before Barack Obama's speech on Aug. 27, 2008.