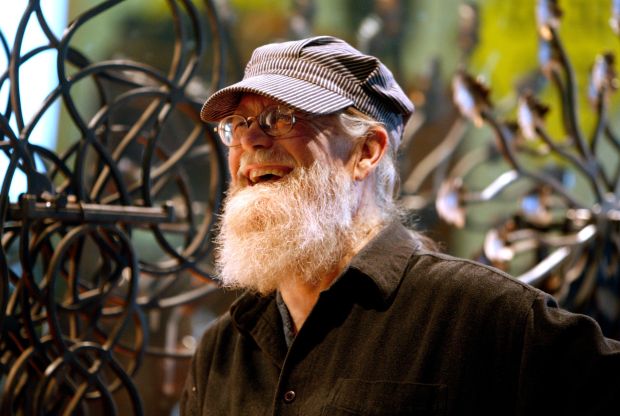 Artist Charles Ringer has a sly sense of humor that he often incorporates in his sculpture. 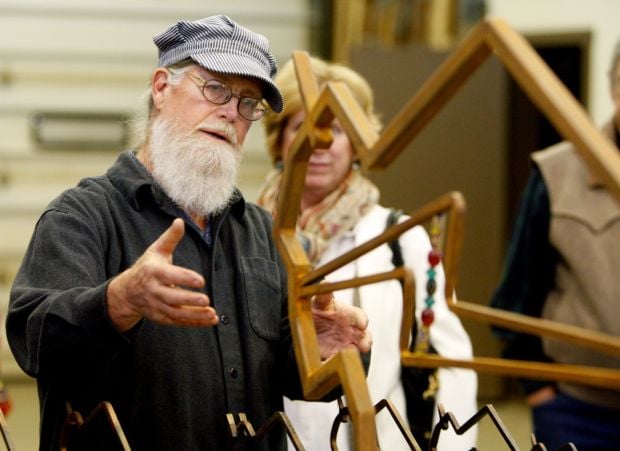 Artist Charles Ringer gives a tour of his Joliet studio to visitors Thursday. The tour was part of the Buffalo Bill Art Show and Sale in Cody, Wyo. 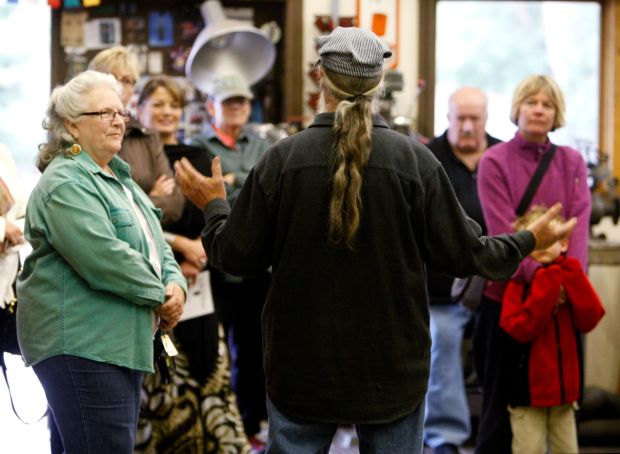 Artist Charles Ringer built a studio from an old wrecking yard in Joliet. 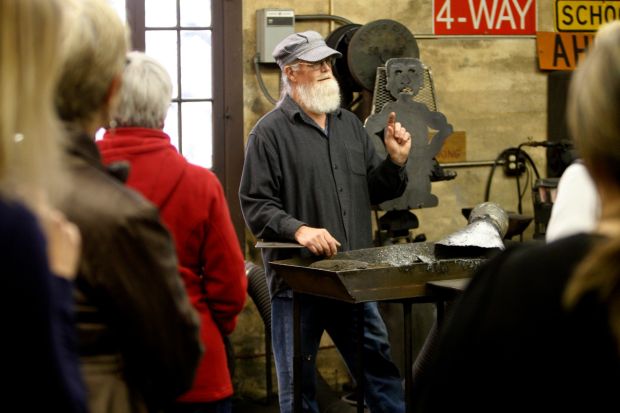 Artist Charles Ringer said he does anything he can to get his sculptures built, even if it means running over a piece with his truck to get the right curve in it. 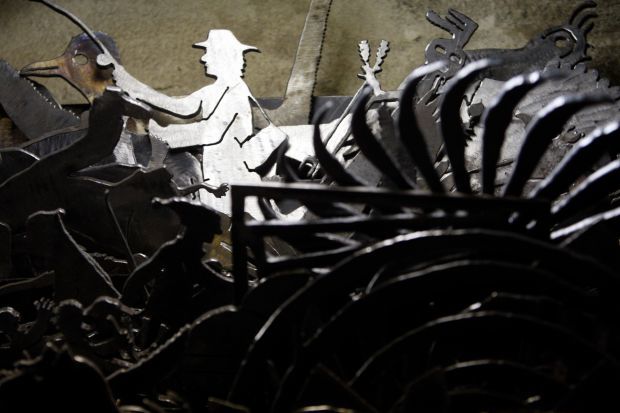 Metal silhouettes by artist Charles Ringer are stacked in his studio as he gives a tour to visitors Thursday. 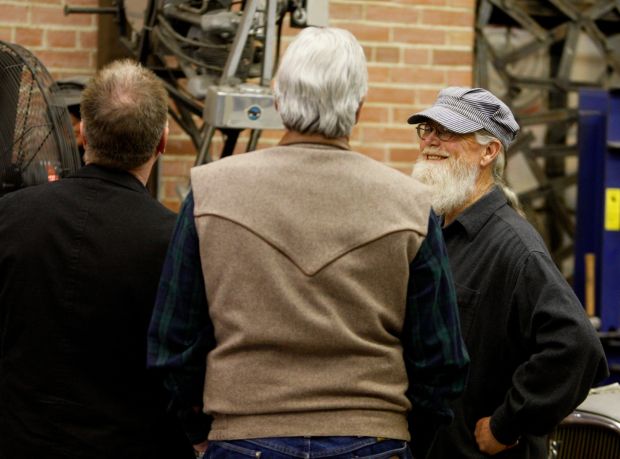 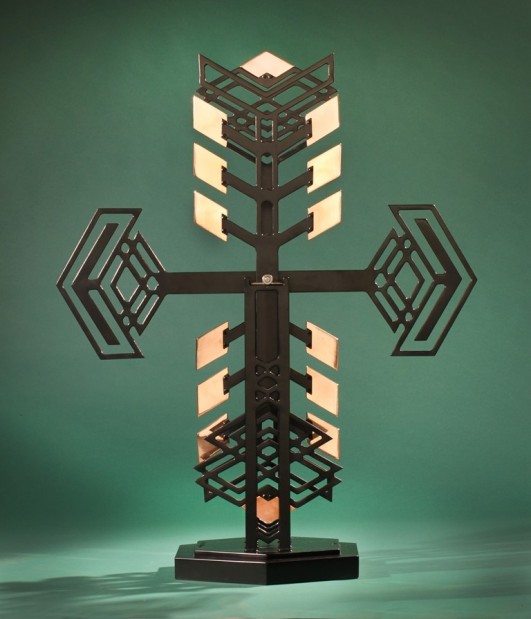 "Indian Paintbrush," a kinetic piece by Joliet artist Charles Ringer, was featured at the Buffalo Bill Art Show and Sale on Sept. 20.

CODY, Wyo. — Joliet sculptor Charles Ringer managed to show both sides of his personality recently as he was honored by the Buffalo Bill Center of the West.

Ringer balances whimsy with the intensity it takes to create 5,000 metal sculptures, owned by such prestigious entities as the The Museum of Contemporary Art, Los Angeles; the Smithsonian Institution; and the Art Institute of Chicago. Ringer, in his railroad engineer’s cap, long gray beard and ponytail, doesn’t have an ounce of pretension in him. He’s got a soft laugh and likes to make sly jokes with his works.

Hail to the Snow God

Anyone driving by his studio on Joliet’s main drag can’t miss seeing his Snow God, which skiers headed to Red Lodge Mountain Resort often pay homage to by dropping coins and other small gifts at his feet.

Another piece has gas pumps sitting around a fire in a barrel to warm their hands like a camp of hobos. He added eyes and teeth to an old tow truck, turning it into Mater from the movie “Cars.” Little kids often stop by to have their photo taken with the truck.

In a recent talk at the Buffalo Bill Center in Cody, Wyo., Ringer ran through the story of his life, one sculpture at a time. One of the first images he projected was of a Radio Flyer wagon, just like the one he used as a kid in rural Minnesota to cart home scraps from the dump to assemble into sculptures. Ringer, 65, hasn’t stopped salvaging pieces from junk yards to give them a second life.

Catching up with his brain

“It’s quite the trick to take a mental thought and create something physical. Your brain works faster than your body and I’m literally running to get it together,” Ringer said.

His kinetic piece “Indian Paintbrush” was purchased by the Whitney Western Art Museum at the Buffalo Bill Center for the West. Curator Mindy Besaw was among the committee members who selected Ringer for the William E. Weiss Purchase Award, but she felt a little guilty pulling the piece out of the auction because a buyer had already made an offer on it. The recent live auction of other works was expected to have sales of $1 million or more.

Ringer has been involved in the Buffalo Bill Art Show and Sale for 24 of its 32 years. It is a major fundraiser for the Buffalo Bill Center for the West. But more than that, it introduces regional and national artists to international buyers. Ringer is the rare abstract artist who participates in the event.

“It’s nice to see something new for our show,” Besaw said. “We’ve got 29 pieces of art from the Weiss Award. We don’t need another painting of a moose.”

In her introduction of Ringer, Besaw said he bridges the gap between artists like Frederic Remington and Alexander Calder, an icon best known for his mobiles.

“I’m so proud to see Charlie Ringer bring art of the West to movement,” Besaw said.

Ringer’s works began as tabletop metal sculptures depicting fishermen or cowboys or the people he met in his travels. After marrying in the late 1960s, Ringer and his wife Emily traveled across the country for three years, living in a trailer that doubled as his studio and was pulled behind his truck.

“I had three tools — pliers, hammers and a torch. I learned how to melt steel,” Ringer said.

They eventually bought an old wrecking yard in Joliet and over the decades, the Ringers turned it into their home and studio, raising their three children there.

In their first humble living quarters, Ringer made windows out of roll-down car windows and fashioned a chandelier from an Oldsmobile air cleaner. After buying out several neighbors, the Ringers expanded their spread to include a small pond and six campfire sites.

“It’s real important to me — sitting around a campfire,” Ringer said. “I’m happy they lifted the fire ban.”

Ringer began making kinetic pieces and broadening his reach, delivering works to galleries in Santa Fe, N.M., and Jackson, Wyo. Still, he continued to use recycled steel, most often from car parts, and his work kept evolving. Ringer welded leftover pieces of steel into a box that is now on exhibit at a bank in Jackson, Wyo.

It all starts with a doodle

Influenced by architect Frank Lloyd Wright, Ringer began working on a series of kinetic sculptures that incorporated Native American symbols. No two of his works are alike because each piece is hand-cut. Ringer showed a series of slides, chronicling the six weeks of work he put into “Indian Paintbrush.”

“Usually it starts with a doodle,” Ringer said. “There is a little finesse with a sledgehammer, but if you don’t get it right, you tear it all apart and start over. I’ve done that a few times.”

Ringer is currently at work on a project for the Billings Logan International Airport, creating 100 steel bison that will be sold to raise money to erect three large bison at the airport to honor the late Bruce Putnam, director of aviation and transit for Billings.

During Ringer’s museum talk, someone in the audience asked him what tool he most hates to pick up.

“What I hate to pick up is the grinder, but is a necessary tool,” Ringer said. “I’m looking for any way to do a job, whatever gets it done. I’ve even driven my truck over a piece to get the right curve in it.”

The Stillwater County Sheriff's Office is continuing to investigate the drowning death of a woman in her late 30s whose body was discovered Tuesday morning in the Stillwater River and the law enforcement agency is asking that anyone with information about the incident reach out.

Red Lodge Search and Rescue has received a report of a Friday, July 2, sighting of a lone female hiker matching the description of Tatum Morell, the 23-year-old woman who remains missing.

Artist Charles Ringer has a sly sense of humor that he often incorporates in his sculpture.

Artist Charles Ringer gives a tour of his Joliet studio to visitors Thursday. The tour was part of the Buffalo Bill Art Show and Sale in Cody, Wyo.

Artist Charles Ringer built a studio from an old wrecking yard in Joliet.

Artist Charles Ringer said he does anything he can to get his sculptures built, even if it means running over a piece with his truck to get the right curve in it.

Metal silhouettes by artist Charles Ringer are stacked in his studio as he gives a tour to visitors Thursday.

"Indian Paintbrush," a kinetic piece by Joliet artist Charles Ringer, was featured at the Buffalo Bill Art Show and Sale on Sept. 20.