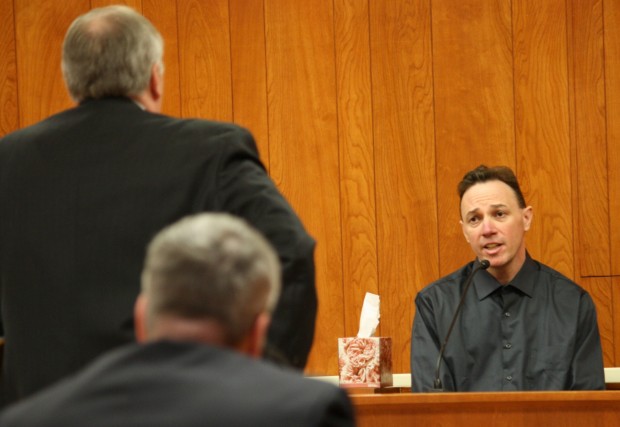 Assistant Attorney General Brant Light questions Walter Larson Jr. on Monday in Dawson County District Court. Larson testified at his trial for the 2008 murder of his ex-wife, Susan Casey, telling jurors that he did not kill the mother of his two children. 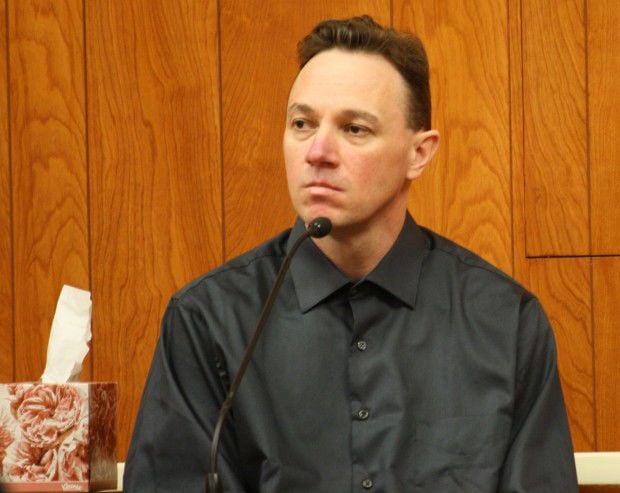 Walter Larson Jr. testifies in Dawson County District Court, where he was on trial for the 2008 murder of his ex-wife, Susan Casey.

GLENDIVE — A former Billings man was convicted late Monday of strangling his ex-wife and dumping her body in the Yellowstone River.

The verdict was announced at 8 p.m., about five hours after the jury began deliberations.

Judge Richard Simonton, who presided over the six-day trial, said a sentencing date for Larson will be set after a pre-sentence investigation. He remains in custody.

Larson, 42, took the stand earlier Monday and testified that he had nothing to do with the disappearance and death of Casey, who was last seen outside her Glendive apartment shortly after 5 a.m. nearly five years ago.

Larson hung his head and swayed slightly as the court clerk read the guilty verdicts. Across the courtroom, about 20 of Casey’s family, friends and supporters reacted with relief.

Larson was arrested in Arizona in February 2012 after a four-year investigation. He moved from Billings to the Phoenix area a few months after Casey’s death.

During closing arguments earlier Monday, Larson’s court-appointed attorney, Randi Hood, argued that prosecutors had failed to prove Larson killed Casey. The murder case was built on an investigation that had “targeted Larson from the very beginning,” Hood said.

She said the prosecution had presented a “fictionalized version” of a confrontation between Larson and Casey outside her apartment, and it had not provided any direct evidence beyond a reasonable doubt that Larson committed the crimes.

Casey’s body was found May 6, 2008, about three weeks after she disappeared, in a remote stretch of the river near Fallon.

Hood also said that efforts by Larson’s defense team, which included Public Defender J. Thomas Bartleson, to paint Casey’s second husband as the real killer was only for the purpose of showing the jury how the investigation focused on Larson “at the exclusion of everybody else.”

During opening statements, Bartleson told the jury that Ted Casey “had everything to gain” by the death of his wife.

Larson and Casey were married in 1993 and had two children before divorcing in 1998. Casey married her second husband later that year and had two more children.

Ted and Susan Casey were headed toward divorce in late 2007, and Susan Casey had moved out of the family home with her four children into the Ponderosa Apartments, located about a block from where the trial took place.

After Ted and Susan Casey separated, Larson and Susan Casey had started seeing each other again after a nine-year break in their relationship caused, in part, by Larson’s 1998 misdemeanor conviction for stalking Casey and her family.

During closing arguments, Light argued that there was “overwhelming” evidence to convict Larson. While there were no witnesses to the killing, Larson’s explanation for his presence at Casey’s apartment the morning she disappeared and his actions in the hours before and after “just doesn’t make any sense,” he said.

Larson testified that he was worried about Casey when she didn’t call him as promised. He left Billings after 1 a.m. when he could not reach her by phone. He called and sent numerous text messages during the three-hour drive to Glendive. Those messages were retrieved from Casey’s cellphone message service and played for the jury.

Larson said he arrived in Glendive at about 4:30m p.m., parked around the corner from her apartment building and went inside.

Bank surveillance video showed what Light argued was Larson’s minivan drive by, then a man walk toward the apartment at about 4:30 a.m.

Larson said he knocked softly on the apartment door so not to wake the children. When he got no response, he returned to the van and tried to reach her again by cellphone.

Light said no one walked by the bank security camera again until 5:38 a.m., about 19 minutes after the same bank video shows Casey leave her boyfriend’s truck.

Larson returned to the minivan, which then pulled into the alley behind the apartment building, Light said. Investigators said they found drag marks in the alley.

Larson believed he and Casey would be remarried and their family would be reunited, Brant said, until he learned a few days before Casey disappeared that she was seeing another man, Brad Holzer.

Brant said Larson began a campaign to break up that relationship by making anonymous phone calls and sending harassing emails under a fake name.

Larson began “spiraling out of control,” Light said, when he learned of Casey’s new romance with Holzer. In desperation, Larson drove through the night from Billings to Glendive, waited outside her apartment and confronted her after she spent the night with her new boyfriend.

Susan Casey never made it inside her apartment.

HELENA — The Montana Supreme Court has upheld a man’s conviction for strangling his ex-wife and throwing her body in the Yellowstone River, ru…

Walter Martin Larson Jr., or “Marty” as he likes to be called, was convicted in 2013 of choking his ex-wife to death and tossing her body in t…

Assistant Attorney General Brant Light questions Walter Larson Jr. on Monday in Dawson County District Court. Larson testified at his trial for the 2008 murder of his ex-wife, Susan Casey, telling jurors that he did not kill the mother of his two children.

Walter Larson Jr. testifies in Dawson County District Court, where he was on trial for the 2008 murder of his ex-wife, Susan Casey.