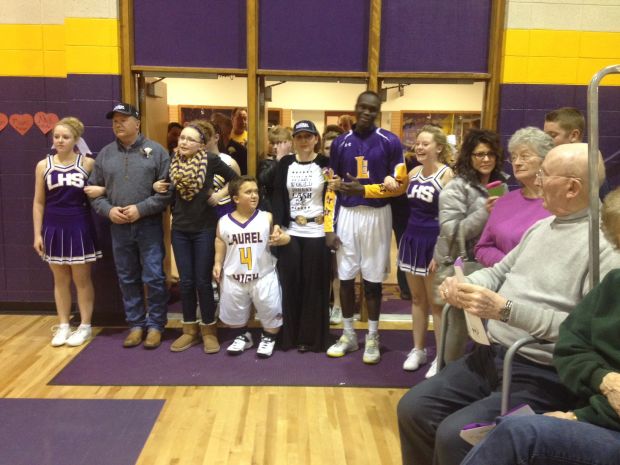 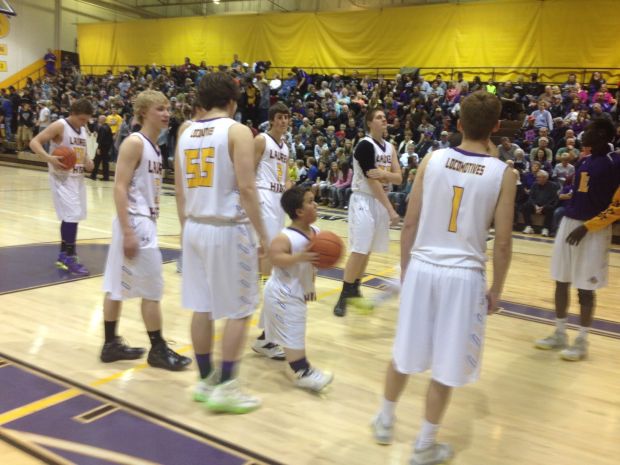 Seth Kraft, of Laurel, readies a shot during warmups Saturday. Kraft got his first start during Senior Night and responded by scoring a bucket in two minutes of play.

His coach, Pat Hansen, is a bit suspicious.

“That is kind of generous,” Hansen said with a laugh before Saturday’s final regular season game against Billings Senior. “He’s 4-1 with a ladder, maybe.”

Laughter comes easily around Kraft, the little person who has been manager of the Locomotives for three seasons before taking on a role more akin to a student coach during the current season.

Hansen started Kraft Saturday as a tribute to the player’s hard work and as a birthday present: Kraft turned 18 Saturday and said he just might go out gambling with a few friends after the game.

“I haven’t done much today, just getting focused for the game,” Kraft said, seated with his coach and his best friend on the team, Daniel Nyiang, a 6-3 post player from South Sudan who’s out for the rest of the season due to a knee injury.

“It doesn’t matter how long I play tonight, whatever he wants,” Kraft added, gesturing to his coach. “I’m honored to play.”

He deserves to play, the coach replied.

“He puts in incredible effort, as much time as all the players,” Hansen said. “He has incredible knowledge of the game. We listed him this year as a student coach. He does a lot of basketball stuff (as an aide to his coach for two periods during the school day). He doesn’t do water and towels. He’s part of the team. It’s an opportunity he more than deserves.”

A few days ago, Hansen called Senior coach Jim Wilsey to apprise him of his plan to start Kraft. “He was outstanding,” Hansen said of his coaching colleague. “He said we’ll do whatever we can” to make the experience memorable for Kraft.

If he got a bucket during the game, Kraft said before tipoff, that would be great. But he said he’d also be happy with an assist or two.

“I like assists, and I like playing ‘D’ (defense),” he said. “I will steal the ball if I have the chance. I’m not going to take it easy on them. It’ll be great if I score, but it’s OK if I don’t. I’ll be successful tonight if I make an impact, even a small one.”

Kraft needn’t have worried about putting his name in the scoring column. After missing his first shot, he connected on a short attempt late during his two-minute stint. Both sets of fans responded with a loud ovation for Kraft’s first — and only — career points.

Kraft played guard on offense. Hansen had his team in a 2-3 zone defense, with Kraft ball-hawking the Senior guards on the right side of the zone.

“He’ll be our speed bump out there,” Hansen said.

The Locomotives, ranked second in Class A with an undefeated conference record, finished the season with a 16-2 record. They defeated Senior on the Broncs’ home court last month, 62-43.

When Kraft helped lead his teammates on the floor, he broke through a sign crafted by the cheerleaders with this message: “Seth, you never fall short of amazing us.”

Seated next to each other a couple hours before the final regular-season game of their careers, Kraft and Nyiang resorted to traditional banter between teammates: trash-talking. Nyiang is a Kobe Bryant fan; to Kraft, LeBron James is the best player ever.

Nyiang lives in the Kraft home in West Billings, and the two readily affirm they’re best friends, despite their verbal jousting.

“He is a modern-day Larry Bird,” Hansen said of Kraft. “He likes to talk trash. But he’s also an incredible kid, highly intelligent and very witty. He takes every possession, every shot to heart.”

During games and practices, Kraft goes over with each player where they’re supposed to be when the Locomotives are running their offense. But off the court, it’s a seemingly endless but good-natured dispute between Kraft and Nyiang — over who’s better at video games, who has better luck with girls and even things that matter, like race and size.

“You talk about players who are going to be hard to replace,” Hansen said. “A kid like Seth, it’s difficult to describe how important he is to the team — and to me and the program.”

Seth Kraft, of Laurel, readies a shot during warmups Saturday. Kraft got his first start during Senior Night and responded by scoring a bucket in two minutes of play.