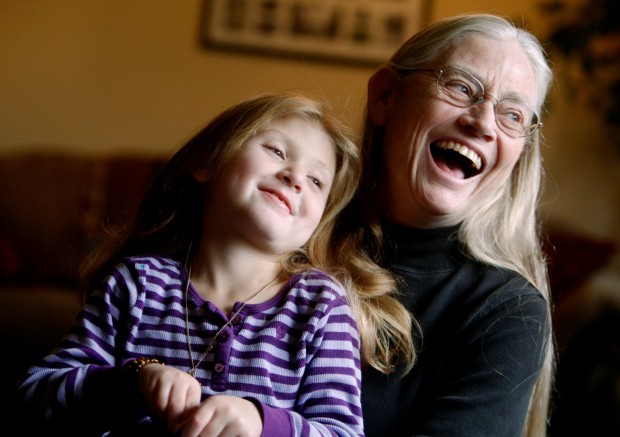 Jada Bascom and her grandmother, Jeana Moore, share a close relationship. Moore has walked thousands of miles in the U.S. and Europe signing people up to bone marrow donor registries. 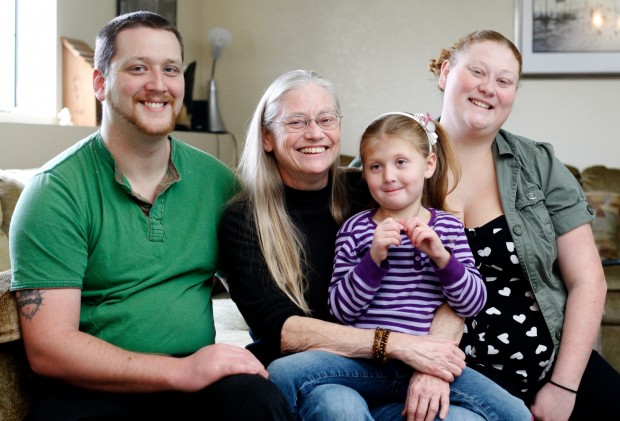 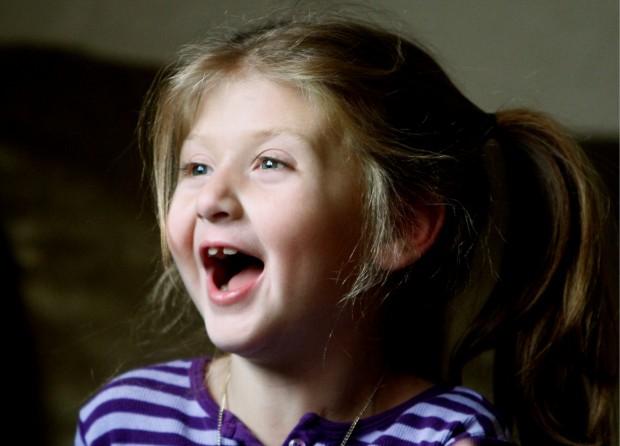 Jada Bascom, 5, now in remission from leukemia, wants to be a ballerina. 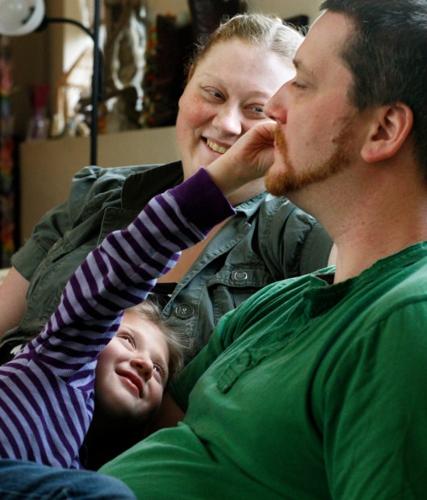 Jada Bascom and her parents, Issa and Kyle, celebrate the five-year-old's "rebirth" on the Nov. 27 anniversary of her life-saving bone marrow transplant.

On Thanksgiving morning, 5-year-old Jada Bascom will be bouncing around her West End apartment, entertaining her parents and claiming the absolute attention of her grandmother.

The aspiring ballerina, who never sits for more than a second or two at a time, whirls around the room, her thick reddish-brown hair flying behind.

Looking at the kindergartner who attends Big Sky Elementary School, it would be hard to believe she has spent nearly half her life in hospitals or that it took a complete stranger from half a world away to save her life.

Of all the millions of people on the planet registered as bone marrow donors, only one, a 35-year-old social worker and musician from a small village in southern Germany, proved the perfect 10-point match Jada needed.

Now her family wants to lessen the odds for others with deadly blood diseases. Her grandmother, Jeana Moore, of Spokane, Wash., has walked thousands of miles in this country and in Europe talking face-to-face with people about the importance of bone marrow transplants and urging them to become part of registries that match donors with people in need.

Next week, Moore and the man who saved Jada’s life, Torsten Huber, will kick off a drive at Montana State University Billings to sign up potential donors with the National Bone Marrow Registry’s “Be the Match” project. All it takes is a swab from inside the cheek, Moore said.

The drive begins Monday at 7 p.m. with a talk at Petro Theatre. Sign up for the registry at the MSUB Student Union Building on Tuesday from 10 a.m. to 2 p.m. Moore, Huber and Jada will continue the drive at stops in Western Montana, Idaho and Washington before Jada returns to Billings to await the birth of a new baby brother in December.

Every year on Nov. 27, the anniversary of her transplant, the family celebrates Jada’s “rebirth.” The original was fraught with so much trauma that it was almost more than her young parents, then living in Spokane, could bear.

Nothing during nine months of pregnancy gave Issa Bascom any inkling that something could go so wrong.

“All the tests were normal. My doctor said, ‘I can’t believe you’re having such an easy pregnancy,’ ” the Billings woman recalled five years later. “Even the delivery was relatively easy.”

The birth of 6-pound, 7-ounce Jada marked the last easy day in the lives of Issa and her husband, Kyle, for the next three years.

As soon as Jada was born, a nurse noticed burst blood vessels on her tiny body.

“She was with us a short time and they whisked her away,” Issa said.

By the time she was two weeks old, Jada was diagnosed with a disease that is a precursor to leukemia. At one month old, it had evolved into full-blown leukemia. For reasons no one will probably ever be able to explain, Jada had developed a rare form of the blood cancer most often associated with elderly patients, her grandmother said.

Jada had her first surgery at four weeks and her first chemotherapy at five weeks. When it proved ineffective, her doctor sat down with the family and told them she had a 50 percent chance of survival.

Desperate, the 21-year-old parents agreed to become part of a drug study. But 2-month-old Jada was allergic to the drug and was soon in liver failure. Her other organs began shutting down, too.

Jada’s doctor in Seattle was aware of a drug called Difibrotide, manufactured in Italy but not approved for usage in this country. With a waiver for compassionate use, the drug company sent Difibrotide free of charge to the ailing infant, who was brought back from the brink of death, Moore said.

It got her well enough for what she really needed — a bone marrow transplant. Bone marrow that matched Jada’s, however, was harder to come by than a highly specialized drug manufactured a continent away.

“All of the family was tested first,” Issa said. “We didn’t match.”

Moore, who has made a thorough study of her granddaughter’s disease, said only about 30 percent of donor matches come from family and in most cases a sibling is the closest match. Jada had no siblings.

Next, Jada was tested against millions of potential donors on the national register of bone marrow donors. Again, there was no match. The search widened to Europe, where Huber proved a perfect fit.

Jada was 7 months old when doctors hooked up an IV with Huber’s life-saving cells. Moore cuddled her beloved granddaughter while the marrow dripped into the baby’s fragile body.

“We said prayers and sang together,” Moore said. “They were transplant songs about how her body was inviting the new cells in and welcoming them.”

The battle was a long one, as Jada’s body adjusted to the donor marrow. Her parents and grandmother took shifts at the hospital so someone would be with her 24 hours a day, seven days a week.

“We lived at the hospital,” Issa said.

Jada slowly improved. Drugs to suppress her immune system so it wouldn’t reject the donor cells were gradually eliminated. She has been in remission now for three years.

Grateful for the life of her granddaughter, Moore, 60, began a mission of her own. The family started the Jada Bascom Foundation to educate others and to help people in need of bone marrow transplants.

Then Moore began the first of her two transcontinental walks. On Oct. 17, 2009, she set out from the Fred Hutchinson Cancer Research Center in Seattle on a 15-month, 4,434-mile journey across America to raise awareness and urge those she met along the way to join the registry. When she wound up her mission in New York City, Jada and her parents were there to greet her. Huber and his wife flew in from Germany to join the family and meet the little girl whose life had depended on him.

Moore launched a second walk this May, in Europe, starting in Kiel, Germany, and concluding in Venice, Italy, in September. Thousands of potential donors were signed up both in the U.S. and Europe.

“I didn’t travel with cash or credit cards,” Moore said. “People invited me into their homes. Sometimes hotels offered me rooms for free. Every night in 20 months of walking, I had a safe place to stay.”

Jeana Moore and the man who saved Jada’s life, Torsten Huber, kick off a drive next week to sign up potential donors with the National Bone Marrow Registry’s “Be the Match” project. All it takes is a swab from inside the cheek, Moore said.

The drive begins Monday at 7 p.m. with a talk at MSUB's Petro Theatre. Sign-up for the registry is at the MSUB Student Union Building on Tuesday from 10 a.m. to 2 p.m. The drive will continue at stops in Western Montana, Idaho and Washington.

Laurel pedophile gets 80 years; victim a 'hero' for disclosing abuse

Michael Gilbert Voyles, 53, was convicted in Yellowstone County District Court earlier this year for three counts of sexual abuse which occurred over a decade ago. His conviction followed the boy he abused, now an adult, telling investigators what Voyles did to him and again recounting his trauma during the three-day trial.

A federal parolee is in custody after allegedly leading Billings police on a series of chases around the city earlier this week.

Abortion ruling prompts protest in Billings, with varying reactions across the state

Though the striking down of Roe v. Wade by the Supreme Court will have minimal impacts to Montanans for the foreseeable future, the news still evoked a range of emotions from leaders throughout the state.

'We were just chucking stuff out the window': Park City man ponders rebuilding after losing longtime home to flood

Standing on the wooden steps that led to what once was his longtime home on the Yellowstone River, Park City resident Mike Kinsey still wonders what's next.

As the Yellowstone River recedes, power is restored and access sites re-open, questions linger for damaged property and infrastructure, but there’s little concern for the well-being of the river.

Shotgun blasts erupting at a birthday party over the weekend in Billings resulted in one person in custody.

Billings adopts its budget, sparring over how best to use portion of public safety mill levy

Two weeks ago, a zoo official said they were committing its drag queen event even after intense blowback. On Wednesday, the event went live, a…

Jada Bascom and her grandmother, Jeana Moore, share a close relationship. Moore has walked thousands of miles in the U.S. and Europe signing people up to bone marrow donor registries.

Jada Bascom, 5, now in remission from leukemia, wants to be a ballerina.

Jada Bascom and her parents, Issa and Kyle, celebrate the five-year-old's "rebirth" on the Nov. 27 anniversary of her life-saving bone marrow transplant.