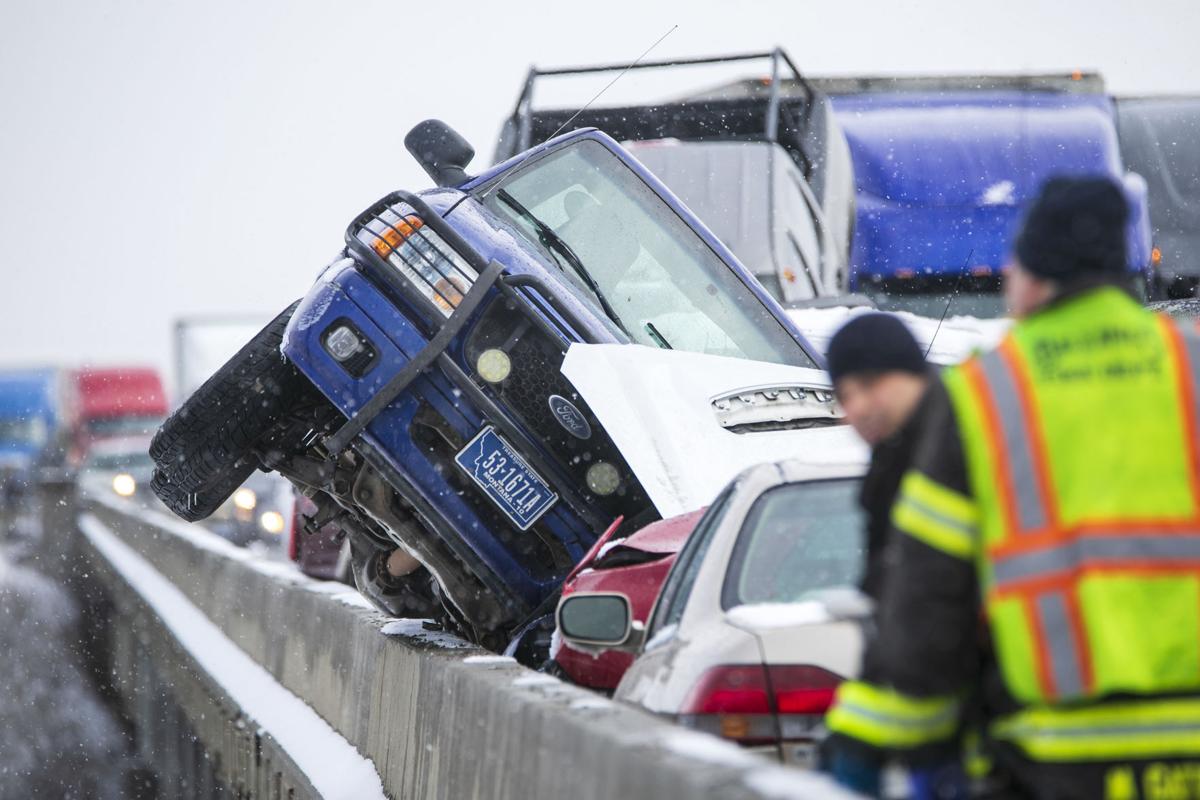 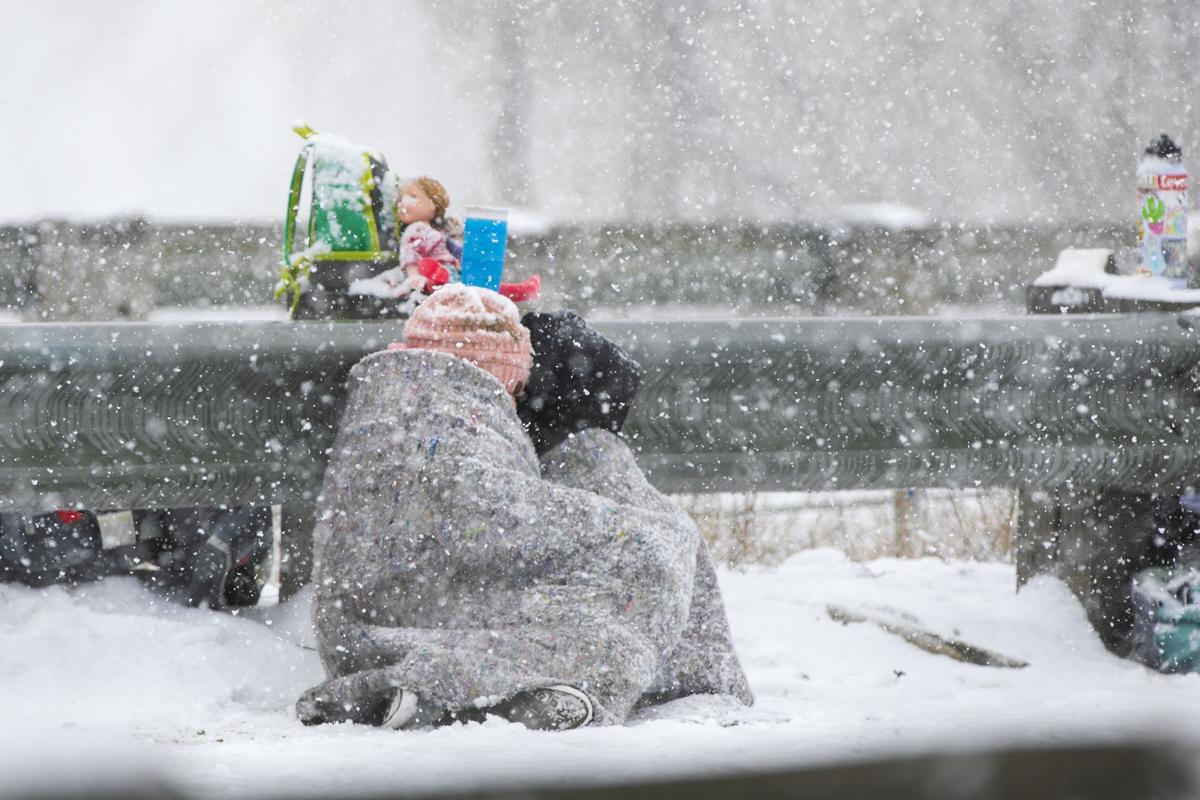 Two children huddle in a wool blanket as snow comes down after a massive pileup occurred on I-90 westbound Saturday, Feb. 27, 2021, on the Yellowstone Bridge near Lockwood. 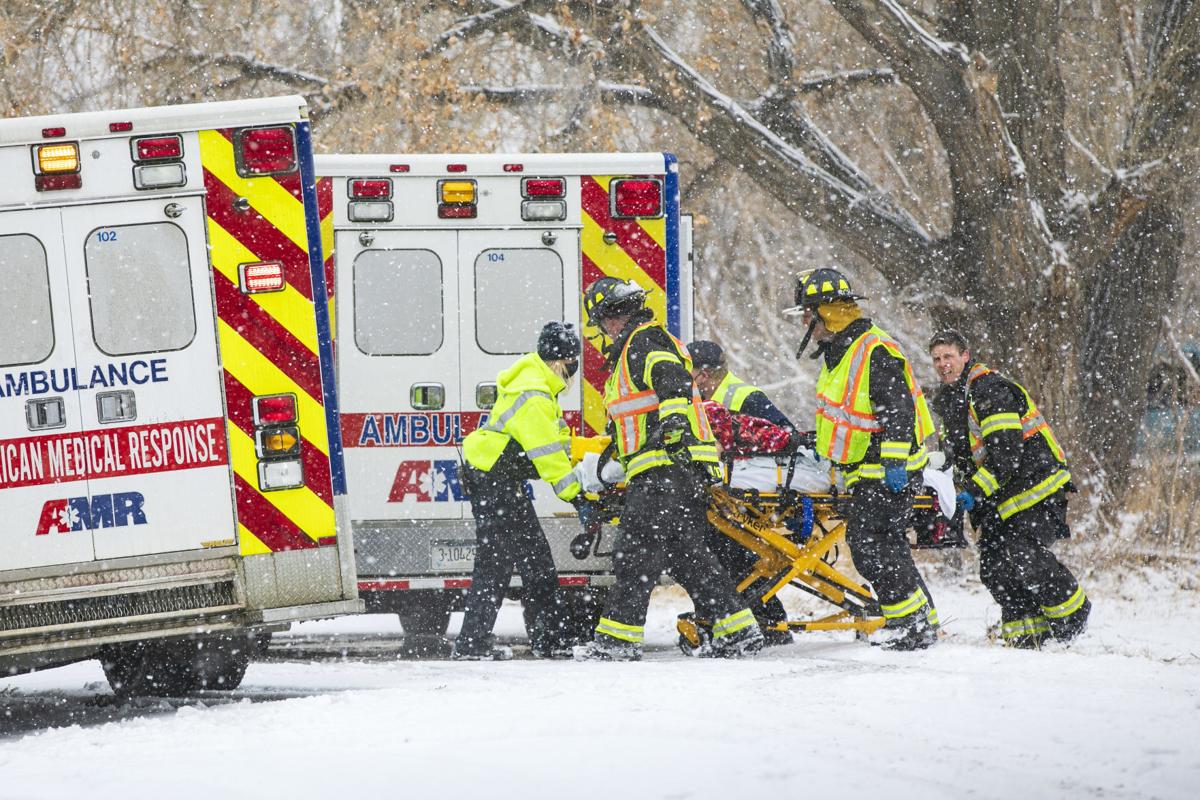 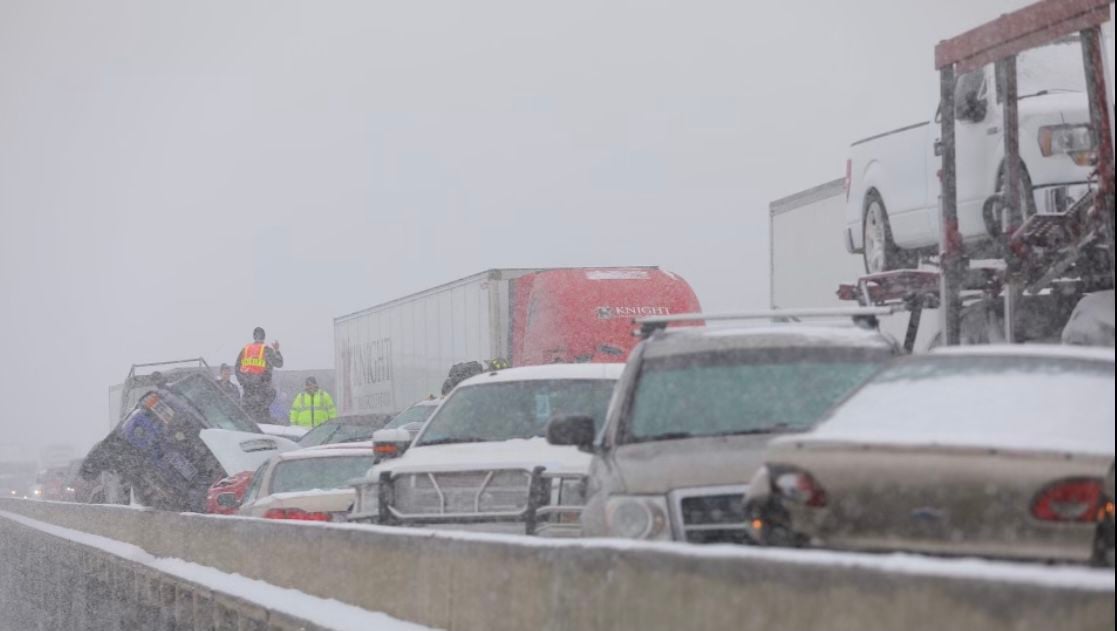 Traffic in both directions on I-90 was halted Saturday about noon by a multi-vehicle pileup. 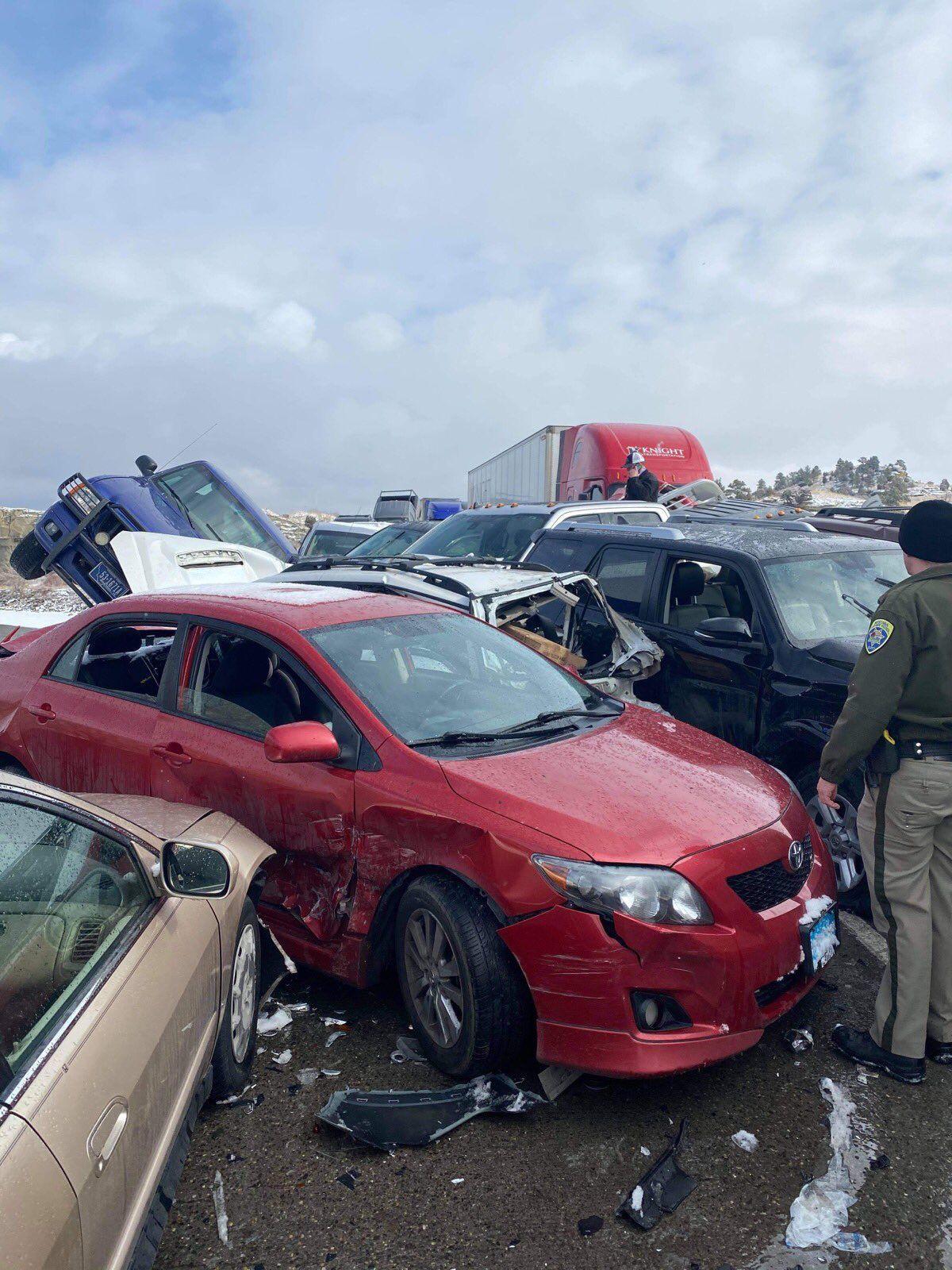 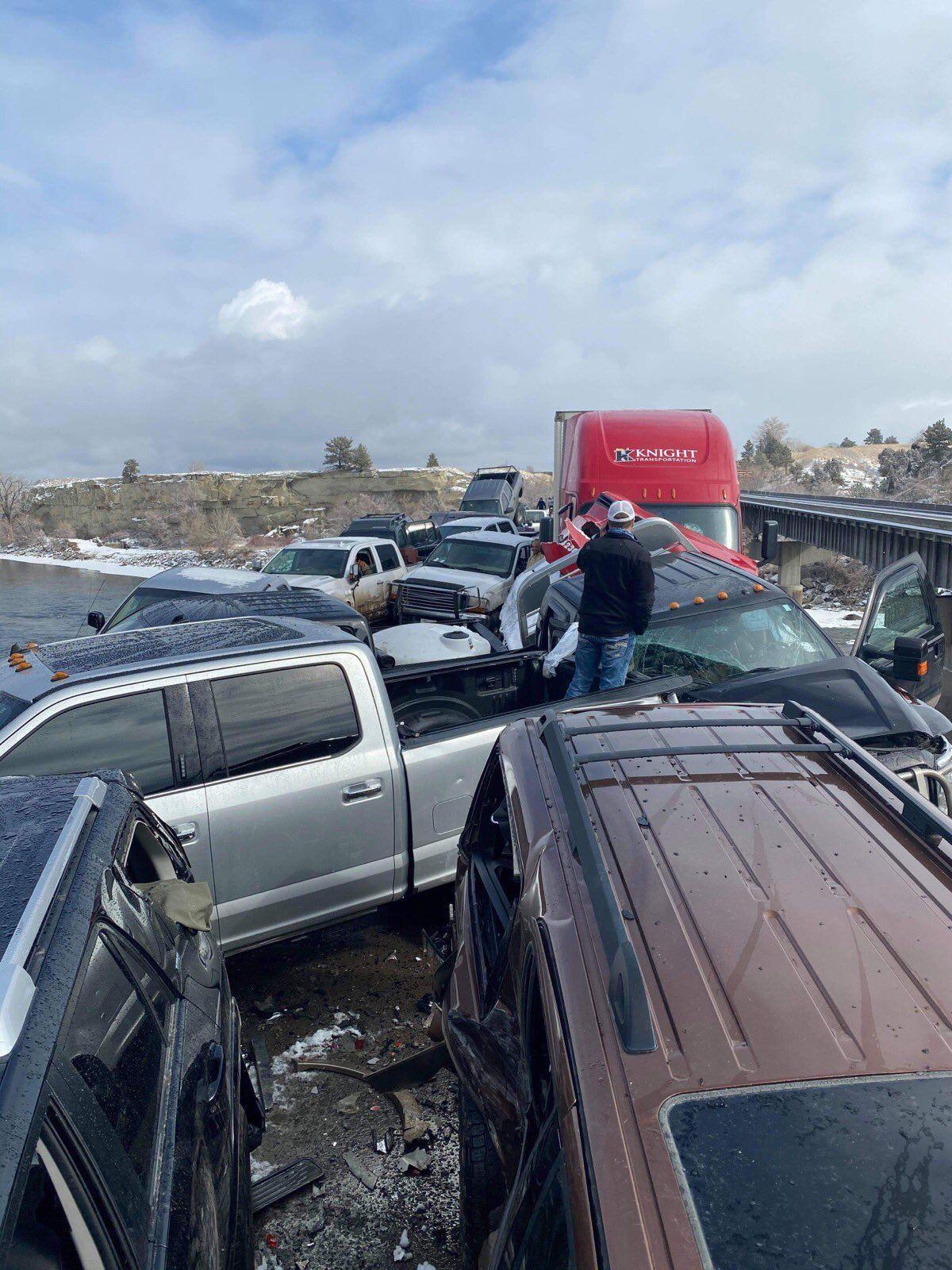 Traffic on Interstate 90 just east of Billings was halted Saturday in both directions just before noon by a multi-vehicle pileup.

The crash involved approximately 30 vehicles on the bridge crossing the Yellowstone River near mile marker 452. No fatalities have been reported, according to a social media post from Montana Highway Patrol.

"I would say this is the largest pileup, and winter-time accident, that I've seen in my nearly 20 years with the fire department," said Billings Fire Department Chief Jason Lyon, who served as the incident commander.

The wreck occurred in the westbound lane, with damaged cars, trucks and SUVs spanning almost half of the bridge. Traffic was backed up for several miles in both directions. I-90 from the South 27th Street entrance to the I-94 split near Johnson Lane was closed for nearly three hours while crews cleared the bridge of wrecked vehicles.

Lyon said that the crash resulted in four people being taken to the hospital. Three of whom reportedly suffered minor injuries, and a fourth person is being treated for serious but non-life threatening injuries.

Two people were transported off the bridge by a Lockwood Fire District ambulance, while two others fell from bridge. Lyon estimated the fall to be about 100 feet, and both were found and treated by BFD and American Medical Response crews.

Lyon said the severity of the wreck led AMR to enact their mass casualty plan, calling in 30 off-duty paramedics.

A bus driven by a team with Billings Logan International Airport Aircraft Rescue and Firefighting took an initial group of travelers who were stranded on the bridge to MetraPark, where Yellowstone County Disaster and Emergency Services established a center for them to link up with friends or family. Lyon said some of the paramedics called in met with those taken to MetraPark to check for any possible injuries.

One of those travelers, Bella Contreraz, was on her way to her job in Billings when she was crossing the bridge. She said she slammed on her brakes when she saw vehicles stopped ahead of her. Another oncoming semi truck struck her vehicle, and left her pinned to the side of the bridge. Another driver, she said, helped her escape by prying open her door.

Lyon said that even after that one group left on a bus, about a dozen people were still trapped in their vehicles. Wreckers cleared away a path for most to escape safely, but two passengers in two vehicles had to be extricated with the Jaws of Life.

Two subsequent buses, one with MET Transit and one with BFD, took the remaining travelers off the bridge. A crew with the Montana Department of Transportation cleared the bridge of any lingering ice, and made sure it didn't suffer any structural damage from the wreck. Deputies with the Yellowstone County Sheriff's Office were also among those who responded.

The suspected cause of the crash was ice on the Yellowstone River Bridge, according to MHP.

"The amount of teamwork and resources that you saw go to this event, and everybody knew their job and did their job is one of the reasons why there’s so few injuries and why the incident was able to be resolved in relatively short order," Lyon said.

It’s been a rough February for crashes as snowstorms not seen during January rolled in throughout the month making travel sometimes treacherous.

A 25-year-old Billings woman was killed last week in a head-on crash on U.S. Highway 87, which also hospitalized a 62-year-old Roundup man.

Last Sunday, I-90 just east of Big Timber was shut down after three semis crashed, blocking traffic. Another crash involving three semis was reported on U.S. Highway 191 north of Harlowton.

Earlier in the month, a Billings Fire Department fire truck tipped onto its side while responding to a crash on I-90 near Lockwood. The fire engine was totaled and will need to be replaced.

A Billings Fire Department fire engine crashed shortly after 8 a.m. Friday morning in Lockwood while responding to an accident on Interstate 90.

Multiple crashes around 8 a.m. Friday along I-90 near mile marker 452 blocked portions of both the eastbound and westbound lanes.

It’s been a little over three months since two tow truck operators were struck and killed while recovering a vehicle on the interstate between Park City and Columbus.

A basement fire in a Terry Avenue residence began while multiple people were inside the structure, but no injuries were reported, according to…

Construction will begin this fall on Interstate 90 between downtown Billings and Lockwood.

A motorcyclist died Saturday afternoon after colliding with a sedan on the west side of Billings.

Truck had gone off an embankment, landing on its top 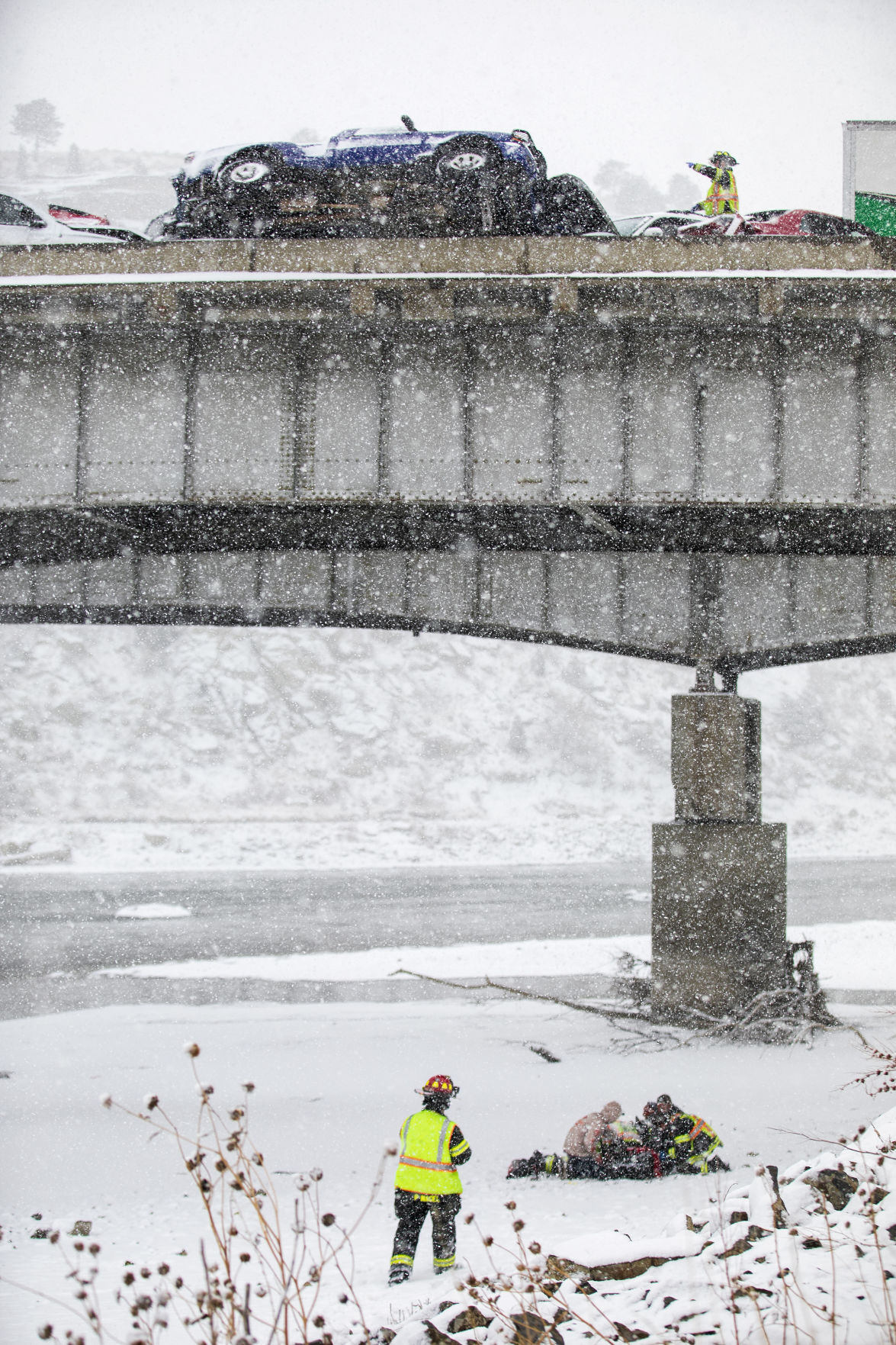 Two children huddle in a wool blanket as snow comes down after a massive pileup occurred on I-90 westbound Saturday, Feb. 27, 2021, on the Yellowstone Bridge near Lockwood.

Traffic in both directions on I-90 was halted Saturday about noon by a multi-vehicle pileup.