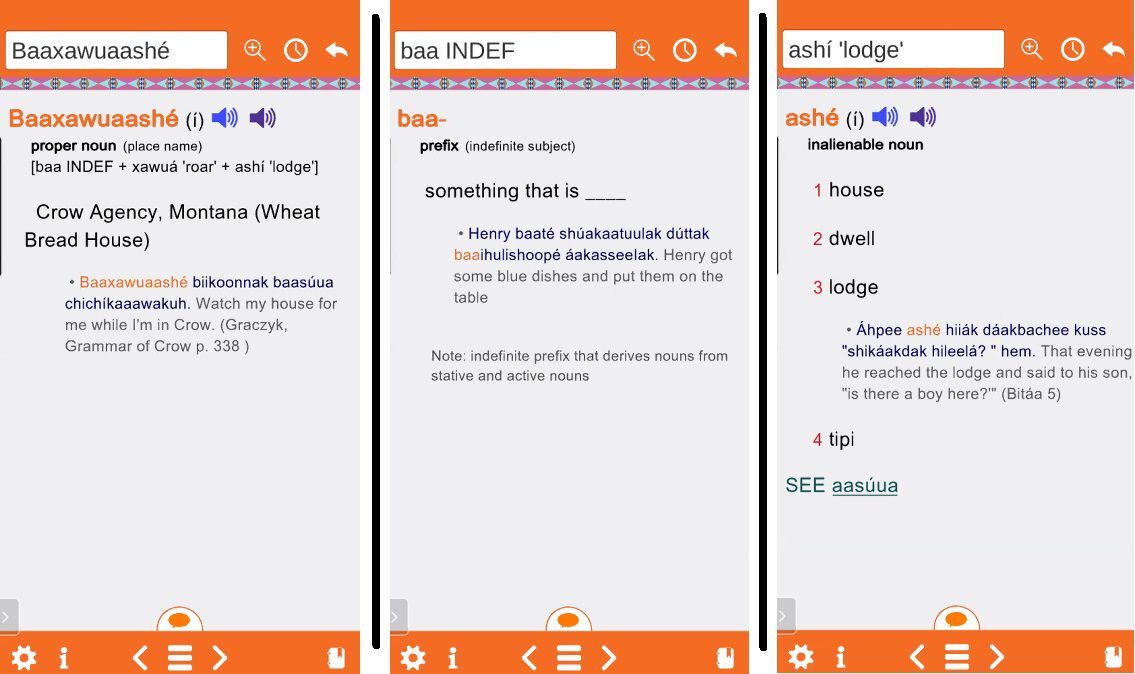 A series of screenshots from a new Crow Language app shows how it breaks down words beyond their surface meaning. 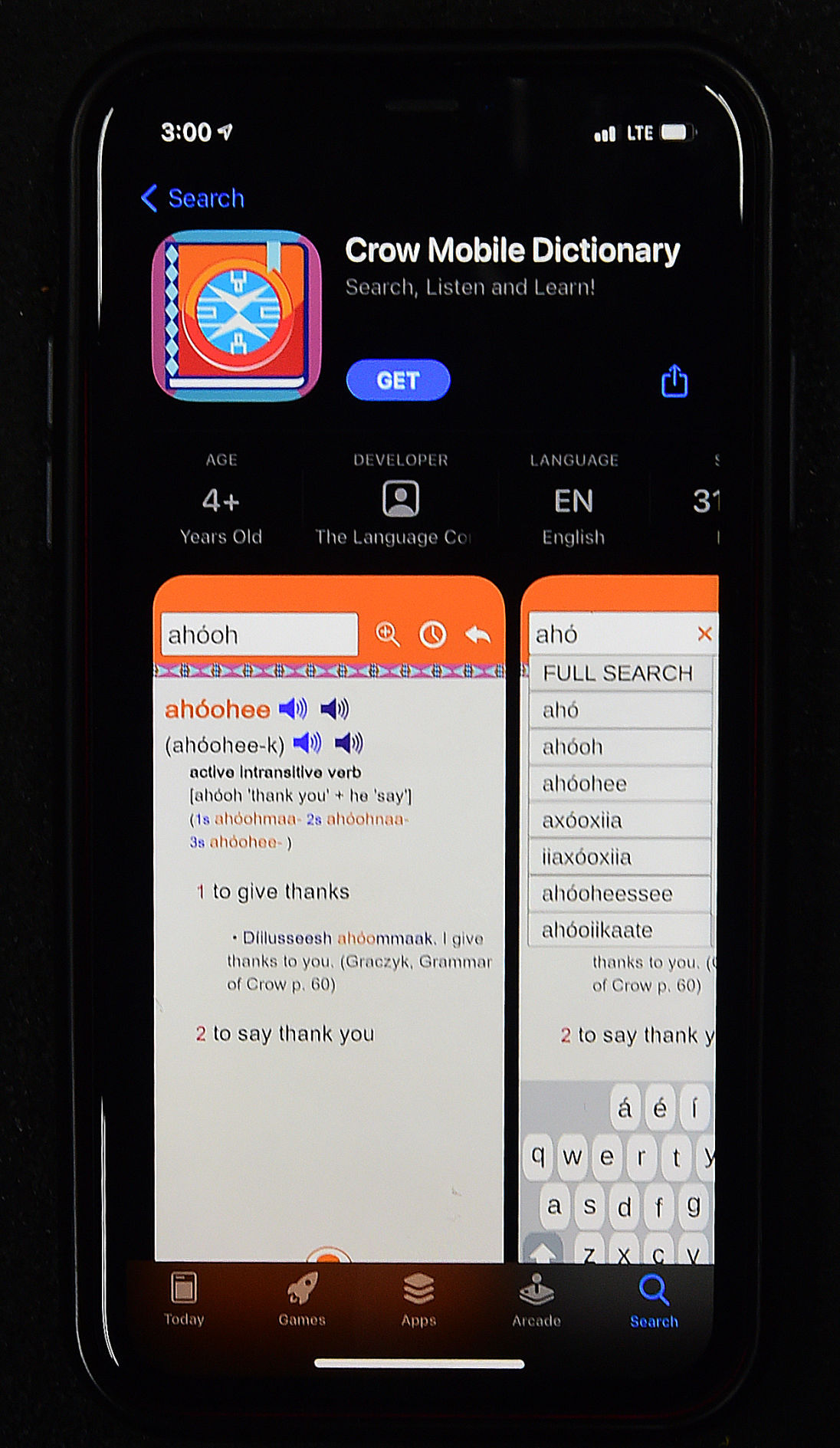 A new Crow language app is available for download on smartphone platforms.

For years, organizers have been collecting a massive database of Crow words, comparing nuance about their meanings and translations, and seeking out as many speakers of the language as possible — all with the goal of creating a new way for people to learn the language.

A new Crow language app launched in mid-November, offering convenient access to a wealth of knowledge.

“Our speakers had an immense depth and breadth of the Crow language, and we learned that the language was remarkably vital,” said Janine Pease, an administrator at Little Big Horn College who chairs the Crow Language Consortium.

The app — officially titled "Crow Mobile Dictionary" — has more than 10,000 Crow words, more than 20,000 entries for parts of words, and more than 30,000 English entries with Crow translations.

It was produced in a joint effort between the consortium, The Language Conservancy, and several other groups, and was unveiled in a virtual event Nov. 19.

It's more than a Google-that-word type of resource. It provides nuance about grammar, inflections, history, and multiple meanings of words — a "learner's dictionary," as Language Conservancy executive director Wil Meya said.

When Roanne Alden Hill started teaching in the St. Labre school system 13 years ago, there were few resources for the district's first Crow language teacher. She adapted adult-geared texts into a self-made curriculum, “but I always felt like we could do better.”

Things are now much improved, with posters, flashcards, and a three-level set of books. Phone-based tools are an important next step.

“I felt like this language app is really going to work with these kids,” she said.

Tim McCleary, a professor at Little Big Horn College, shared a story about speaking with a young girl raised by her grandparents, who spoke to her only in Crow. But she would answer them in English. McCleary asked her why.

“She said, because I don’t hear Crow on the TV," he said. If the Crow language isn't reflected in what kids see and hear through technology and popular culture, “it puts into their mind that Crow isn’t valuable, or isn’t important.”

Encouraging children and young adults to keep Crow alive is a major point of emphasis among language advocates. Pease said that the dictionary word gathering efforts unearthed an encouraging number of young speakers, but a common concern about the language's preservation is its concentration among elderly speakers.

That concern has been sharpened as the COVID-19 pandemic has hit tribes hard across the U.S., including on the Crow Reservation.

“We’ve lost so many people with this pandemic, it’s just so awful,” Alden Hill said. “I always feel like a little more of the language is gone with each fluent speaker that we lose.”

More than 80 fluent Crow speakers shared their knowledge for the app. Organizers found that it was common for their language to be concentrated in specialties; one person would have a deep vocabulary about hunting, another about agriculture, another about household living.

“Not everyone knew everything, but in a way all these Crow speakers were an encyclopedia,” Pease said.

There were also words that have been created to adapt to modern life, describing things like computers or the internet.

The app aims to show how the relationship between words evolves. Jacob Brien walked through how the app can be used to explore parts of words.

Crow Agency — Baaxawuaashé — translates literally to "wheat bread house," a historical reference. The prefix, Baa, describes "something that is ___." The last part of the word, ashé, means "house."

“You can really just go to each word and dissect it," Brien said.

There are some bugs still being worked out in the app, and some word entries that need tweaking. Organizers hope to add updates in the future. The group has also created a "Crow Vocab Builder" app with games and quizzes.

“This is just, we hope, the beginning,” Meya said.

While the Alterowitz Gym was alive with spectators, dancers, drummers, singers, music and happy chatter during the 51st Annual MSUB Powwow, a …

The Crow Tribe may elect a new chairman and new leadership after casting ballots in the Executive Branch general elections.

Montana State University’s College of Agriculture has partnered with Blackfeet Community College to receive a grant from the U.S. Department of Agriculture to facilitate greater opportunities and new programs for Native American students.

The Standing Rock Sioux Tribe is prioritizing the distribution of COVID-19 vaccines to those who speak Dakota and Lakota languages.

A series of screenshots from a new Crow Language app shows how it breaks down words beyond their surface meaning.

A new Crow language app is available for download on smartphone platforms.