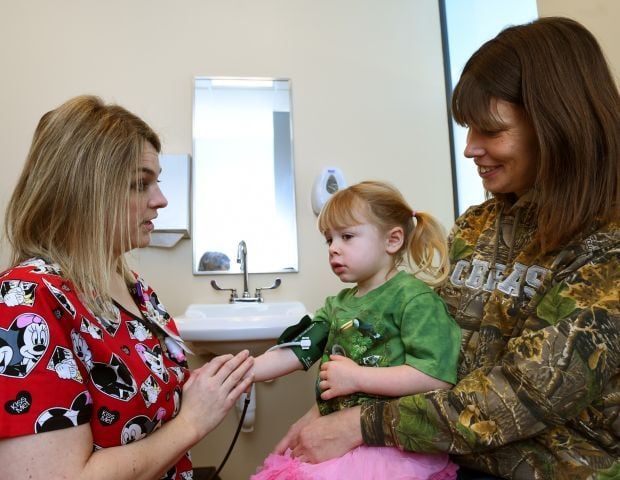 Three-year-old Carla Musselman sits in mother Capri’s lap as she has her blood pressure taken by pediatric neurology nurse Jill McGrew during an appointment at Billings Clinic. Dr. John Binder is treating Carla for seizures. 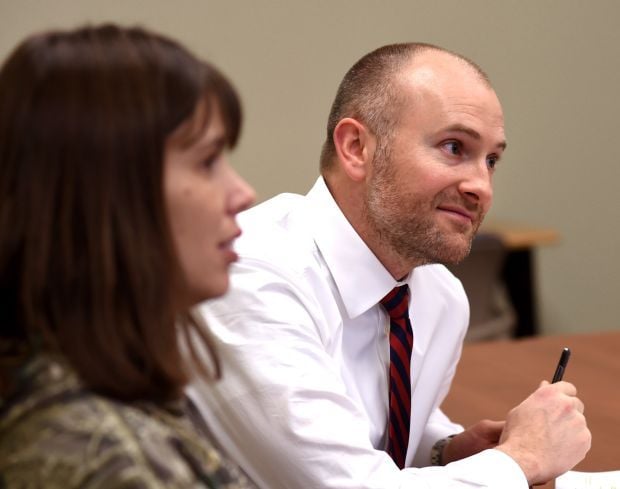 Seeing Carla Musselman bounce around the waiting room at Billings Clinic in her pink tutu while scooping up plastic dinosaurs and clinging to hospital staff, you’d be hard pressed to know what brought her to the hospital.

But the abrupt and unpredictable symptoms of the curious, talkative and bold 3-year-old’s condition are exactly why she needs to be there. With the help of the clinic’s new pediatric neurologist, Carla has been able to get the treatment she needs without having to travel far.

“Until you get it under control, there’s almost no warning,” said Capri Musselman, Carla’s mother. “It’s almost like they have a force behind that’s pushing.”

Carla was diagnosed last year with Doose syndrome, also known as epilepsy with myoclonic-atonic seizures, a condition usually found in children that brings on different kinds of seizures.

While about 10 percent of adults will suffer from one seizure in their lifetime and around 1 percent of the general population suffers from epilepsy, Doose syndrome affects about one in 10,000 children, or one to two percent of those with childhood-onset epilepsy.

Nearly 95 percent of the cases begin within the first five years of life and can be difficult to treat, but Carla’s pediatric neurologist at Billings Clinic said she’s made significant strides in her treatment.

“It’s very challenging to treat medically,” said Dr. John Binder. “It’s tough to really stop the seizures, but (Carla and her family) continue to do really well. I think she’s incredibly resilient and has made incredible gains. Even though it’s a severe syndrome, a lot of kids can make great progress and come out of it as they get older.”

Carla’s first seizure, and the first sign that something was off, came on July 22, 2014, as she was being her usual active self, playing and climbing on a chair at their home near Billings.

“She just fell off (the chair),” Capri Musselman said. “She was having her first grand mal seizure.”

Carla went to the hospital in Red Lodge, but two hours after the seizure ended, her speech was still slurred and didn’t completely return for another hour.

The family visited her pediatrician in Billings, who put her on medication in hopes of treating the seizures, but the seizures returned about a week later and they upped her dose.

Soon after, Carla began to suffer smaller seizures, and the family visited both hospitals in Billings before heading to the Denver Children’s Hospital for specialized treatment.

The Musselman family had made just one trip to Denver when Binder, who been working the Denver hospital they’d visited, began working in Billings in late August, making him one of just a very few pediatric neurologists in the state and a boon to the family.

“It’s been a blessing,” Capri said. “It’s such a great relationship. I don’t know what we would’ve done without it.”

As a pediatric neurologist, Binder works with all sorts of neurological issues with children, including epilepsy, developmental delays, strokes, headaches and other ailments.

He said it’s a job he’s excited to do every day and recognizes a need for it in Montana, with only one other pediatric neurologist in the state of which he’s aware.

“There’s a huge need here in the community, for sure,” he said. “It’s nice to provide pediatric neurological care in the state.”

The Musselman family said they’ve been grateful for Binder and the care he, his staff and other staff at the clinic have provided and their constant communication. For Carla, that care plan included finding the right mix of medications balanced with the proper dose while working with the family on more things they could do at home.

“I like to try to prevent the seizures with the least number of meds with the lowest doses causing the smallest amount of side effects,” Binder said.

At their most frequent last year, seizures struck Carla at least once a day — some of them large and lasting for as many as 30 minutes, others much shorter and characterized by a quick stiffening up and fall. But, her mother said they now go as long as two weeks without one.

They still happen. Capri said her daughter had one at the beginning of the week while playing with Lincoln Logs, falling over and hitting her head on her toys. It could be something Carla deals with for years to come.

Her mother said they have to take a long list of precautions necessary to keep their daughter safe and try to plan ahead for any scenarios, which limits the activities in which she can participate. She has a helmet she wears occasionally, they have to be aware of how to recognize and deal with seizures and Carla requires near-constant supervision in case one strikes.

“How do you tell a 3-year-old that they can’t do the things they want to do?” Capri Musselman said. “She wants to go swimming. She wants to ride her horse. We have to find creative ways to keep telling her no.”

There are also concerns for Carla that Doose syndrome causes developmental delays in children. However, Binder said he’s seen little impact on Carla and takes that as an encouraging sign.

He also said that the syndrome’s duration and long-term effects fall along a broad spectrum, with some children dealing with it for years while others come out of it as they age and develop.

Capri said the family isn’t counting on any specific outcome and instead is continuing to focus on Carla’s treatment with Binder while hoping that their daughter continues her positive gains.

“I don’t like to put too much hope into things until they’re all settled,” she said. “But you have to always keep some hope that it’ll work out.”

Capri Musselman said that, after her daughter Carla was diagnosed with a condition called Doose syndrome that brings on numerous seizures, she's talked with numerous people who's children have also suffered from seizures.

She said that it's important for parents and others who take care of children to know how to recognize seizures and what to do if they strike.

Jill McGrew, a registered nurse in Billings Clinic's pediatric neurology office, said that the first key is to identify what a seizure looks like.

Seizures can take a number of different forms and don't always look like the thrashing-on-the-ground episode that many people might think of first.

Symptoms can include but aren't limited to stiffening up or going completely rigid, sudden and sporadic body movements, eye rolling, mouth smacking or a complete limpness in the body.

From there, it's important to get the child onto their side so they don't suffocate and don't try to force anything into their mouth. Make sure they're in a safe area and don't try to control the seizure or hold the person down.

Dr. John Binder, pediatric neurologist at Billings Clinic, said it's also important to keep an eye on how long the seizure lasts. If the seizure lasts longer than five minutes, he said, call an ambulance.

The 15-year-old boy accused of striking a police officer with his car in February and breaking the officer's leg has pleaded guilty.

Montana reported another 569 COVID-19 cases Monday morning in an update to the state's case mapping and information website.

At least 300 more students or staff in Montana's elementary schools have tested positive for COVID-19, according to a weekly report from the M…

Three-year-old Carla Musselman sits in mother Capri’s lap as she has her blood pressure taken by pediatric neurology nurse Jill McGrew during an appointment at Billings Clinic. Dr. John Binder is treating Carla for seizures.