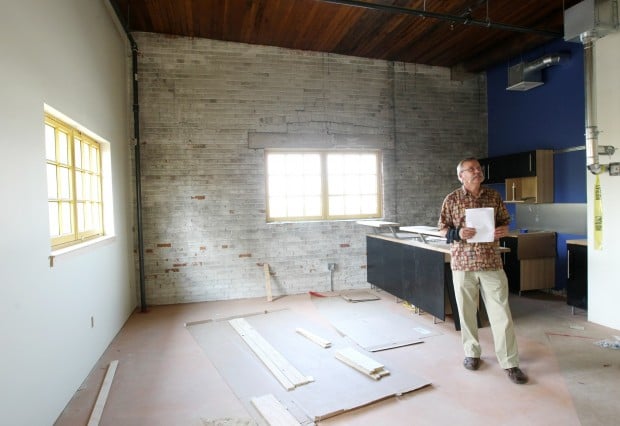 Randy Hafer of High Plains Architects shows one of the apartments in the Tracy Lofts on Montana Avenue. 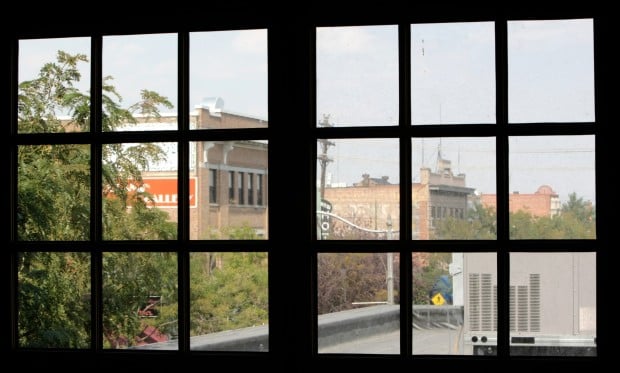 A view from inside an apartment at the Tracy Lofts overlooks Montana Avenue. 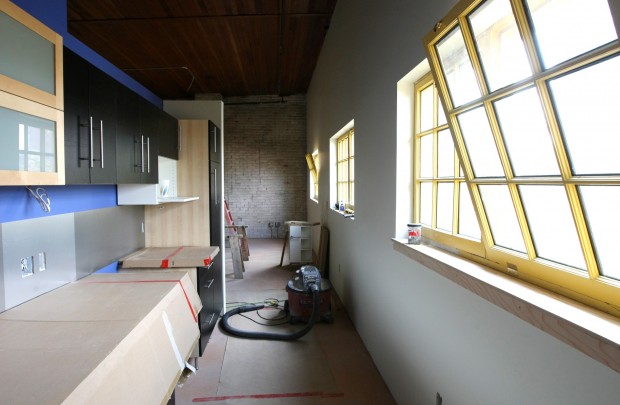 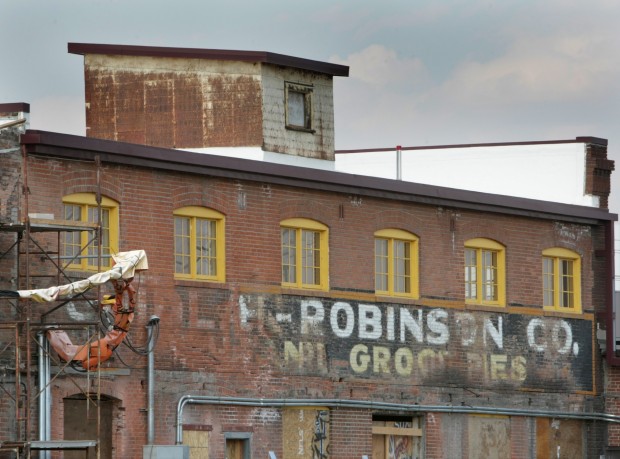 Seen from the south, across the railroad tracks, the Tracy Lofts building is a work in progress.

Randy Hafer is making no attempt to mask the industrial character of the century-old building he is renovating into loft apartments.

Far from it. He is incorporating as many old features of the building into the design as he can, using Sheetrock, for instance, only when absolutely necessary.

Depending on the unit, the 19 apartments in the Tracy Lofts at 2600 Montana Ave. will have walls or ceilings of exposed brick, plaster and lath, plaster over corkboard, clay tiles, concrete or wooden boards. In a few rooms, antique doors that once opened into walk-in coolers were left in place, incorporated into the wall.

"We do have just about every material known to man," Hafer said.

About half the Tracy Lofts will be studio apartments with rents of less than $700 a month.

"No other downtown lofts are anywhere near that," Hafer said.

Hafer, a co-owner of High Plains Architects, has been involved in many other downtown loft projects, including the SoPo Lofts next door to the Tracy Building and the Swift Building Lofts just across the railroad tracks from the Tracy.

Like many buildings along the tracks, the Tracy Building was constructed as a refrigerated warehouse, in 1919. It has 18,000 square feet on three floors, counting the basement.

A sign in the window of the SoPo Lofts next door, put up several years ago, says the Tracy Lofts were going to be available in spring 2011.

"It wasn't unrealistic at the time," Hafer said.

He and his partners were ready to go in the fall of 2010; all they were waiting for was Burlington Northern-Santa Fe Railway to sign off on the lease for the land underlying the building. Since the lease had been drawn up by the railroad and Hafer and his partners signed it, they expected no delays.

But BNSF is a big corporation, and sometimes things get derailed. For whatever reason, the lease would not finally be approved for another 15 months, and Fisher Construction was not able to begin working on the building until last April.

Hafer said he is hoping to obtain a temporary occupancy permit from the city for the second-floor apartments, which should be ready by the end of September, and then finish the basement apartments, followed by those on the first floor.

Hafer's partners are Mike Schaer and Dr. Greg McDowell. Schaer has done much to redevelop Montana Avenue east of 26th Street, while Hafer has been active west of there.

"This is where Mike and I come together," Hafer said.

Like the SoPo and Swift lofts, the Tracy project is making use of federal tax credits for historic buildings, and as with the Swift, Hafer is hoping the Tracy will achieve a LEED Platinum certification — the highest possible energy-efficiency rating from the U.S. Green Building Council.

To that end, the mechanical room in the basement has three plastic tanks with a total capacity of 5,000 gallons. They will be filled with rainwater from the roof, and after filtering, the water will be used for toilets and washing machines in the building.

A 4-kilowatt photovoltaic system on the roof should provide enough electricity to power pumps, chillers and lighting in the building's common areas. Recycled building materials are used throughout the lofts, and Mark Sevier of Dovetail Designs either refurbished old windows or built new ones that look exactly like the old ones.

The apartments range in size from just less than 600 to nearly 1,300 square feet. There are windows in every apartment, and bedrooms on the second floor that don't have windows have skylights that provide light and ventilation.

Hafer tried to keep costs down by having common laundry rooms on each floor, and small refrigerators and no dishwashers. The kitchens and bathrooms use relatively cheap but well-made furnishings from Ikea.

Hafer said it was hard to plan much of anything when designing the building. It was more a case of responding to challenges as they arose during construction.

He intentionally left some original elements of the building exposed, including gaps in several walls so you can see and feel the corkboard that was used to insulate the fruit and vegetable coolers.

With the opening of his new Tracy Lofts about a month away, Randy Hafer said he already has a waiting list with 20 names for the 19 apartments.

That apparently is not unusual for people who own downtown living units.

At the Babcock Theatre Apartments at Broadway and Second Avenue North, all 14 units are occupied, co-owner Kay Foster said, and she gets three to four calls a week from people wanting to live there.

At other downtown living projects Hafer has been involved in, the results have been similar. At the SoPo Lofts, just west of the Tracy Lofts at 2606 Montana Ave., all six apartments are occupied.

Randy Hafer of High Plains Architects shows one of the apartments in the Tracy Lofts on Montana Avenue.

A view from inside an apartment at the Tracy Lofts overlooks Montana Avenue.

Seen from the south, across the railroad tracks, the Tracy Lofts building is a work in progress.