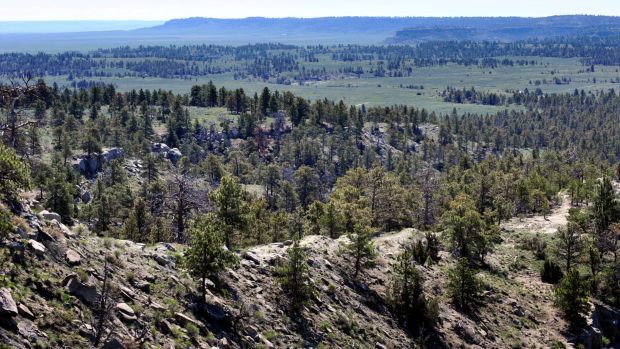 A steep ridge-top mountain bike path runs through the BLM Acton Recreation Area north of Billings. Hundreds of years ago the site was home to a variety of unusual log structures built by American Indians. 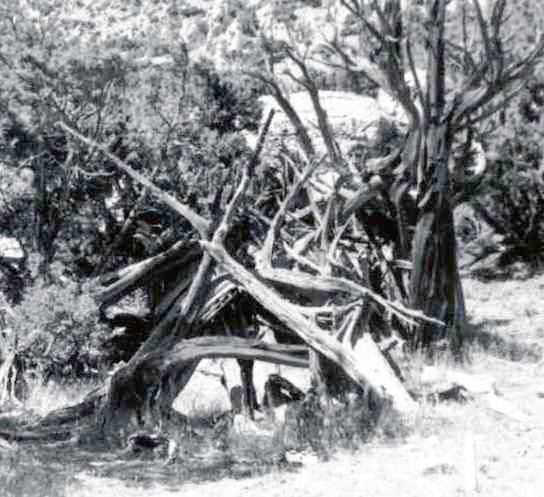 Cribbed and conical log structures like this one were the reason the Acton area was listed on the National Register of Historic Places. Some indications of use by war parties and hunting groups are found in the literature. Archaeological information is very limited, but dates for a few of the structures indicate that the late prehistoric period (late 1700s) and historic period (1800s) saw usage of most of the known sites.

The piles of logs and branches in the old photos don’t appear to be built by humans, but according to a National Register of Historic Places nomination filed in 1974, they were once shelters constructed by American Indians.

“They don’t look like much unless you know what you’re looking for,” said Carolyn Sherve-Bybee, a Bureau of Land Management archaeologist in Billings.

Now, the shelters described in the 1970s seem to have all disappeared.

The structures were once found at the 3,750-acre Acton Recreation Area, located about 20 miles northwest of Billings and managed by the BLM. The site has garnered recent attention after the BLM proposed the area for mountain-biking use. In an environmental assessment, the BLM details the wooden structures and noted that bikers shouldn’t pose any threat to any cultural resources at the site provided that they stay on designated trails.

Since she joined the Billings BLM office, Sherve-Bybee has made trips to the Acton Recreation Area to try and locate the structures, but during her daylong forays she hasn’t found any sign of them. Some, she assumes, were probably used by campers for firewood. Although she previously thought the BLM had opened the area to firewood gathering, her manager told her the Acton area was excluded from that order. The logs could also have ended up as fence posts.

“Hopefully there are some off the road that are still intact,” she said.

But for now, that's unknown.

“One of the goals for the cultural program in this office is to have a survey of the Acton area so managers can make a decision on all of the resources out there,” Sherve-Bybee said. “But doing a 3,000-plus acre inventory is time consuming.”

One of the people to describe the wooden structures for the nomination was former Billings lawyer Stuart Conner, an amateur archaeologist and former board member and president of the Montana Historical Society.

“He and his group were the original recorders on a lot of these sites,” Sherve-Bybee said.

When Conner helped to compile the paperwork for the nomination to the National Register, the site was called the Hoskins Basin Archaeological District. Also called Canyon Village, the site contained two conical shelters and three cribbed log structures — stacked similar to the walls of a low log cabin — that were no more than 2 feet high. One four-sided structure had sides of all different lengths and was not constructed with any deference to compass directions. Tepees, on the other hand, are erected with compass directions guiding the setup. They also don’t appear to be sweat lodges, which are generally smaller.

“It doesn’t give a good idea of other types of use of the area or a drawing of the structures,” Sherve-Bybee said of the nomination form. “Since then, we have to provide a lot more information than was provided in the 1970s.”

The nomination form does note that the shelters were deteriorating even back then. Both types of dwellings were becoming increasingly rare due to weathering, theft and accident by 1974, so the Archaeological District was created for the "protection and preservation of the site in Hoskins Basin," the BLM's environmental assessment says.

The Acton area is one of the few places where both types of structures were found. The stacked logs are more common in south-central Montana and northern Wyoming, while the cribbed logs are found throughout the West, including as far south as Nevada and Utah, Sherve-Bybee said.

The supposition in the nominating form is that the structures were built in the 1800s.

"The conical timber lodges were used by war parties and for overnight protection by any traveling groups," said Conner, who is now 89 years old. "And cribbed log structures may have been used as winter domiciles. They may have had fragile roofs."

One book that describes conical log structures noted that they were often built near the necessities for life: food, water and fuel for fires. Conner said the wooden shelters varied widely based on who was building them and what materials were available. Many of the ones he had found in the region disappeared after range fires in 1984 and 1988, Conner added.

Since cribbed and conical log structures are made of biodegradable materials that decay and disappear, it's difficult to say how far back they date. The simple structures were modified to suit the season and needs of the inhabitants. In the southwest, low log lodges surrounded a pit dug into the earth. Brush, branches and sometimes dirt, hides or mud would be piled over the logs to keep out the snow and rain or to provide shade.

William Mulloy, a University of Wyoming anthropology professor, describes what he called an Indian village of six log lodges near Pompeys Pillar Creek in a 1969 paper. He noted they resembled those he described in 1965 along the North Platte River in eastern Wyoming.

Mulloy was recognized as one of the preeminent scholars of his time about such sites. His doctoral thesis, “A Preliminary Historical Outline for the Northwest Plains,” was long considered a standard for field work.

Sherve-Bybee said the Acton Recreation Area would have been traditional Crow tribal land, but the nearby Yellowstone River was a travel and resource-rich route used by many different tribes, including the Shoshone, Blackfeet and Sioux. Most of the recreation area sits below bluffs that are located just north of Alkali Creek, a long-used route for humans and game animals through the Rimrocks, as well as close to a shallow river crossing.

“There is evidence of other uses out there, too,” Sherve-Bybee said. “There is a vision quest site, lithic artifacts, there’s plenty of evidence of human use of that area.”

There were also two pioneer homesteads that once occupied the region. Those homesteaders likely picked up or disturbed historical sites, evidenced by the nomination report that noted one hearth littered with lithic flakes that had been dug up.

“There’s evidence of people living in that location for more than a day or two,” she said, including rock tepee rings and some rock art.

View the most-read headlines from the week ending June 6.

On the Northern Plains of Montana and Canada, before the arrival of humans, a demigod known as Napi, or Old Man, once roamed with his friend a…

A steep ridge-top mountain bike path runs through the BLM Acton Recreation Area north of Billings. Hundreds of years ago the site was home to a variety of unusual log structures built by American Indians.

Cribbed and conical log structures like this one were the reason the Acton area was listed on the National Register of Historic Places. Some indications of use by war parties and hunting groups are found in the literature. Archaeological information is very limited, but dates for a few of the structures indicate that the late prehistoric period (late 1700s) and historic period (1800s) saw usage of most of the known sites.