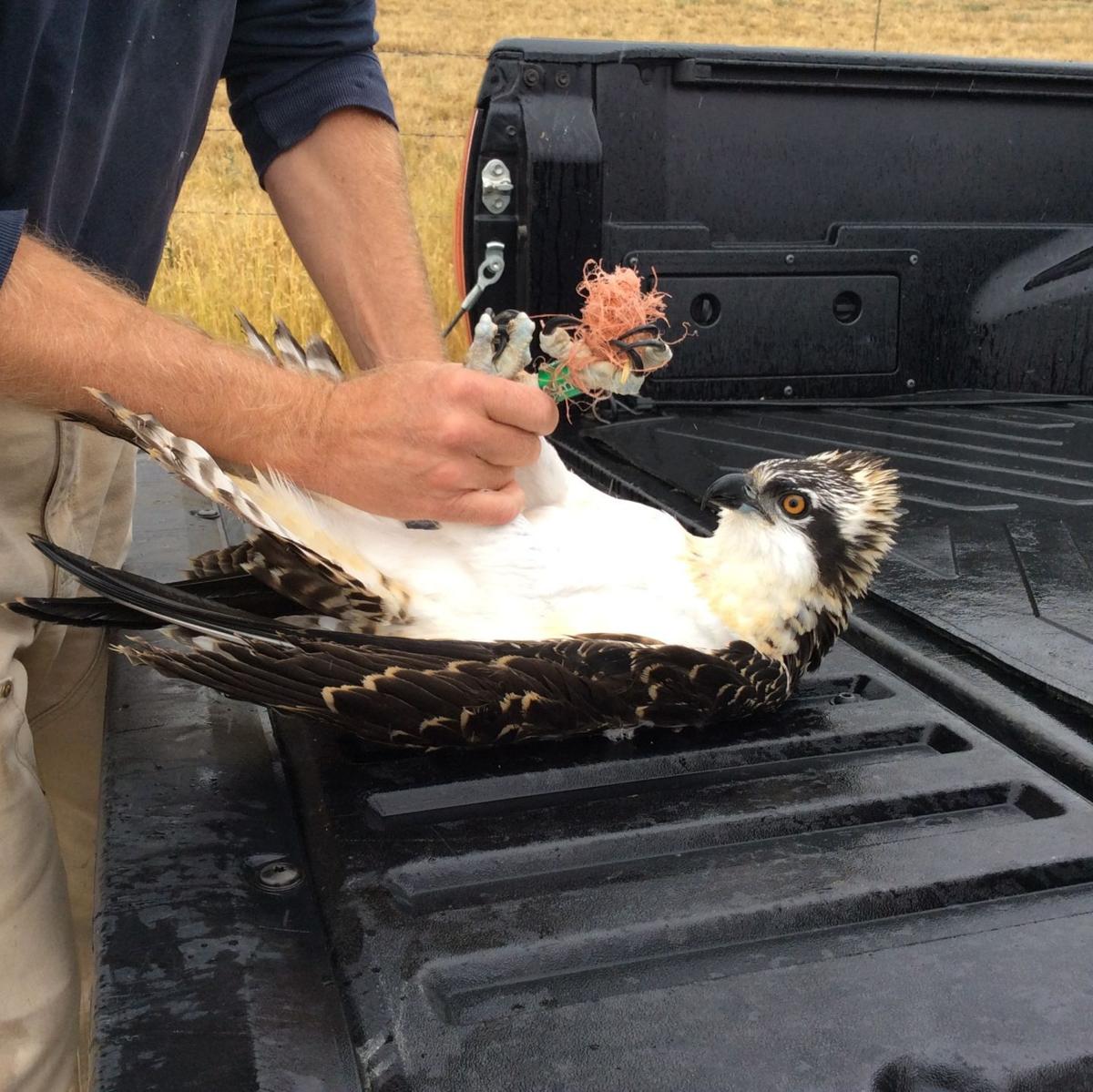 An osprey nestling, removed from its nest by cutting it free from baling twine in this 2014 photo, is held as a volunteer trims away the remaining twine from its leg before the bird is returned to its nest. 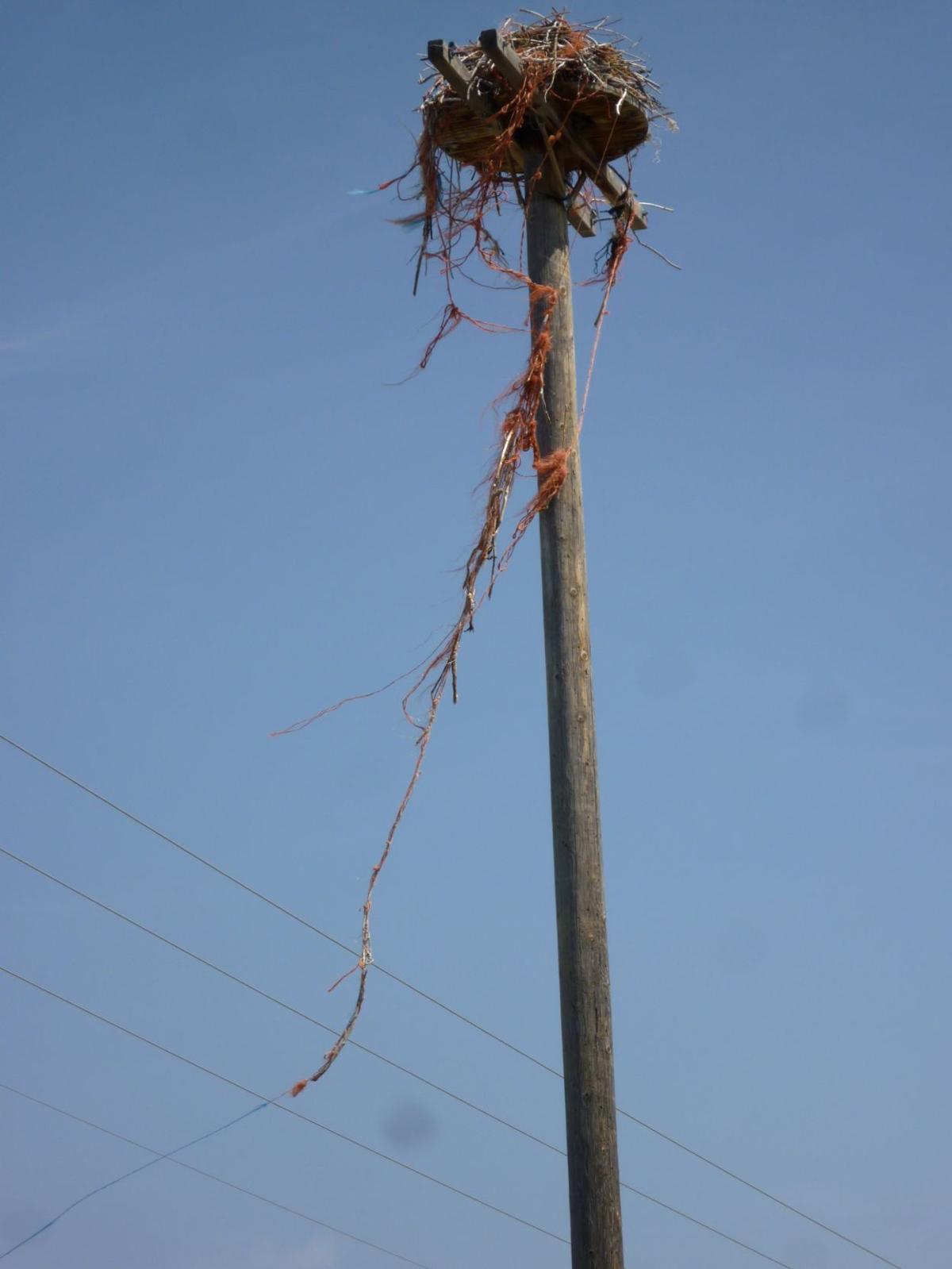 A long length of baling twine dangles from an osprey nest perched atop a pole. 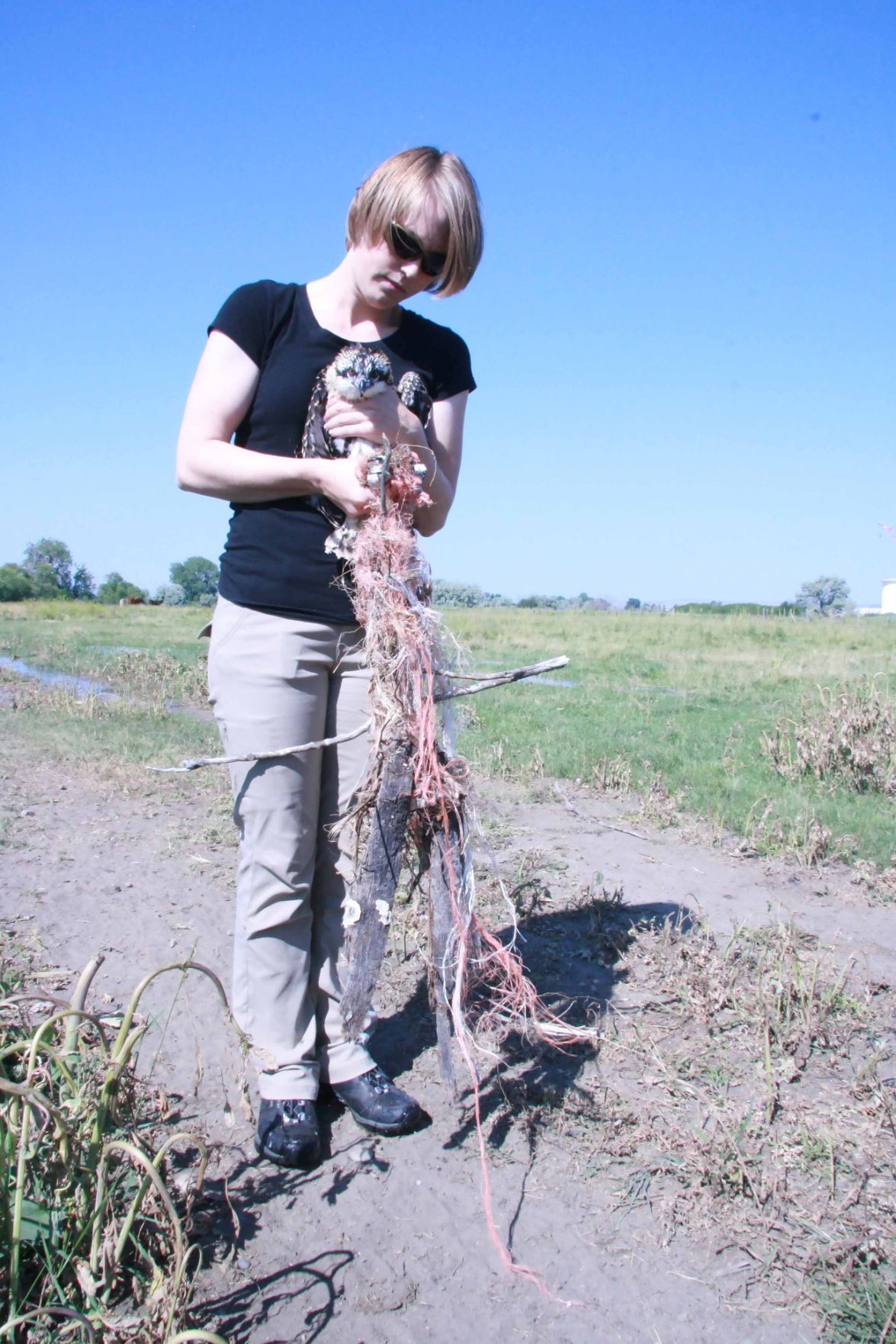 Olivia Umphrey holds an osprey nestling that has a large length of baling twine dangling from its leg earlier this year. 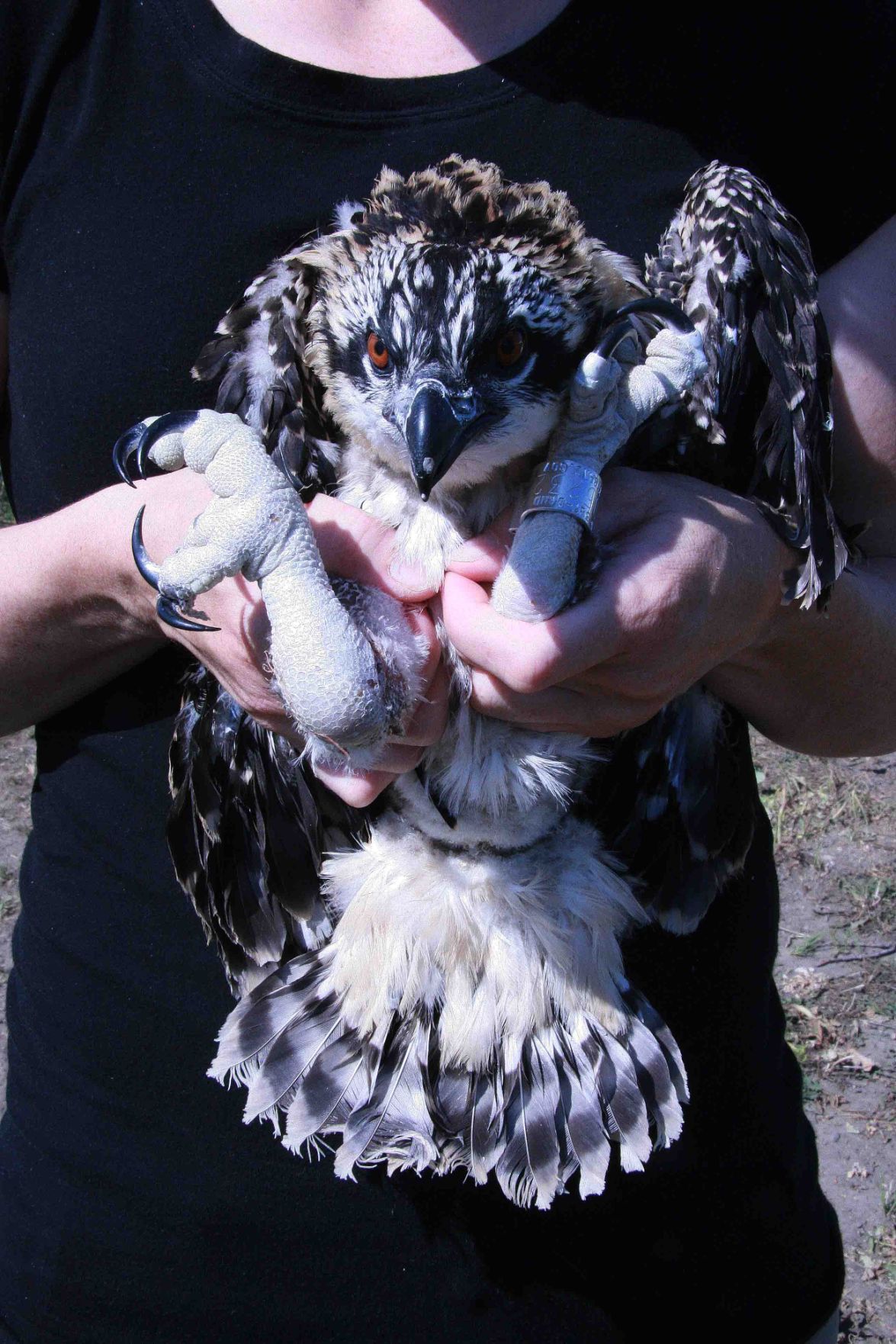 An osprey nestling's right foot is swollen because of the baling twine that had wrapped tightly around it before it was removed.

“It was obvious there was baling twine in the nests,” said Deb Regele, longtime Audubon Society member. “We could see that probably it would be a problem.”

Baling twine is used to bind hay and grasses fed to horses and livestock. Most farmers and ranchers who use it “are very conscientious and they pick it up,” Regele said.

But inevitably some will blow away and end up along highways and rural roads. For whatever reason, the osprey are attracted to the twine and incorporate it into their nests.

Osprey nestlings get tangled in the twine, which restricts their legs, causes swelling and infection and ends in their suffering "a painful, long death” if they aren’t freed, Regele said.

Twine hanging off of osprey nests on power poles can also result in power outages and fires. It causes other problems as well.

Wildlife, including deer and elk, get their antlers tangled in the twine or it wraps around their bodies. Livestock ingest twine, causing internal blockage. And twine that gets embedded in sheep wool can’t be removed, ruining the wool.

The Department of Transportation also has problems with its equipment, including mowers, along highways and interstates when they get tangled in twine.

To combat the problem, this summer a group of YVAS nest monitors created the Baling Twine Committee to be more proactive about the problem. Their goals include increasing public awareness and removing twine from the environment.

Baling twine is made out of polypropylene, and it doesn’t decompose.

“It’s extremely strong stuff, and it will remain in the environment for a very long time,” Regele said. “Burning the twine is a health hazard to breathe, and it’s bad for the environment.”

She pointed to studies that show rural and suburban nests contain nearly twice as much twine as nests in urban areas.

One piece of good news locally is that only 3 to 4 percent of nestlings along the Yellowstone River have been tangled in twine, versus 5 to 10 percent in nests along the Clark’s Fork in Western Montana and other river corridors in the state.

The committee talked with area businesses that are willing to house collection barrels. But members wanted to wait until they figured out what to do with it after that.

Regele discovered a company in Minnesota, Bridon Cordage, which recycles polypropylene into twine. The company will even send a truck to pick up a load, but there are caveats.

“They need to have it all in one spot, and all the twine has to be able to fill a semitrailer to make it worth their while to come and get it,” she said.

The semi, which measures 48 feet by 8 feet by 8 feet holds 30,000 to 40,000 pounds of twine. That means the committee has to find a place to store the twine until enough is collected to recycle.

It also must find a front-end loader or a skid-steer with a claw bucket, to transfer the twine from the storage area to the truck.

The Montana Department of Transportation has agreed to provide acreage west of Billings, if the committee can find someone willing to loan a shed or building to store the twine. It would have to have at least 3,100 square feet for the twine, plus room for the front-end loader.

Or if someone has a warehouse or storage unit or extra-large garage somewhere else in the Billings or Laurel area, that would also be a viable option.

“The Yellowstone Valley Audubon Society is a nonprofit organization and we will be willing to work with someone who is looking for an in-kind donation for tax purposes,” Regele said.

For more information, or for anyone who has a storage facility available to store the baling twine, contact Deb Regele at 406-962-3115 or debregele@gmail.com; Lisa Bessasparis, chairwoman of the Baling Twine Committee at BTC@gmail.com or Mary Mullen at mmullen459@gmail.com.

Thanks to grants and donations, the Yellowstone Valley Audubon Society has been able to establish a Twine Collection & Recycling Site.

An osprey nestling, removed from its nest by cutting it free from baling twine in this 2014 photo, is held as a volunteer trims away the remaining twine from its leg before the bird is returned to its nest.

A long length of baling twine dangles from an osprey nest perched atop a pole.

Olivia Umphrey holds an osprey nestling that has a large length of baling twine dangling from its leg earlier this year.

An osprey nestling's right foot is swollen because of the baling twine that had wrapped tightly around it before it was removed.