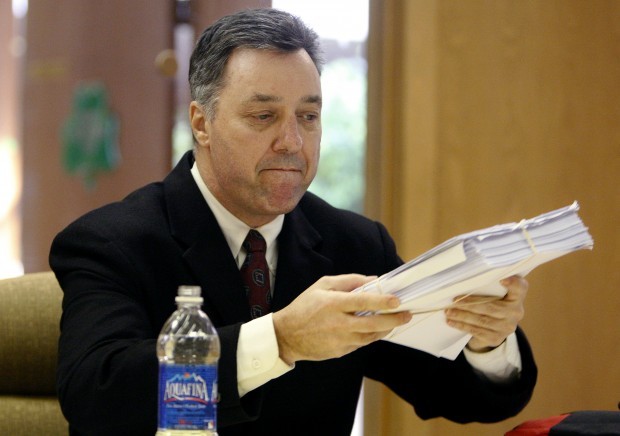 Yellowstone County Attorney Dennis Paxinos hands over a stack of e-mails relating to a sexual harassment and retaliation complaint against him during an interview with The Gazette Tuesday, February 23, 2010. 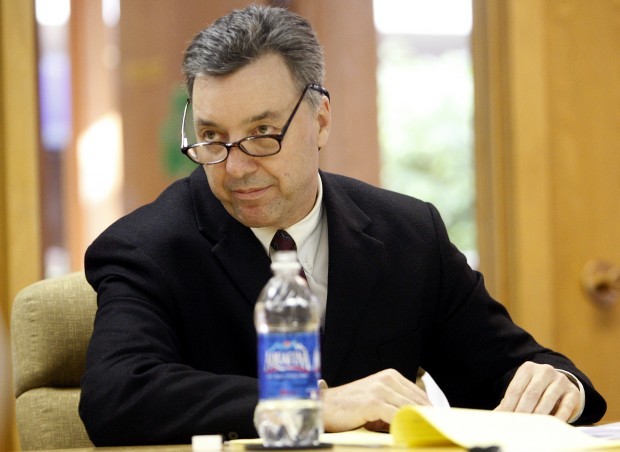 Yellowstone County Attorney Dennis Paxinos addresses the sexual harassment and retaliation complaint against him during an interview with The Gazette Tuesday, February 23, 2010. 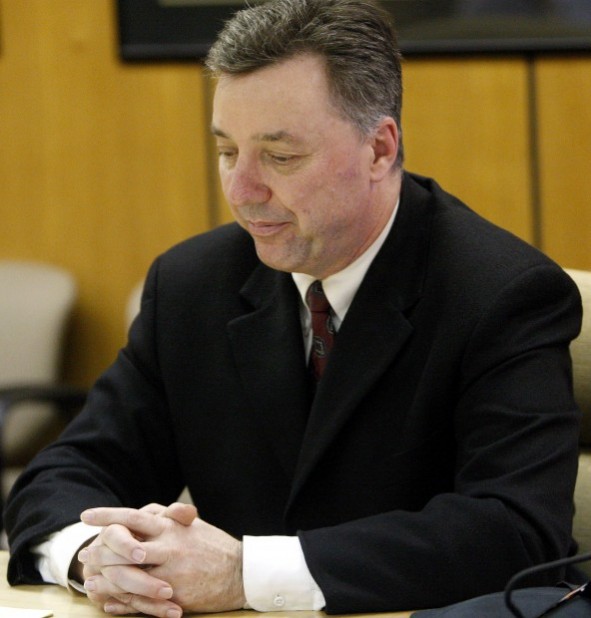 Yellowstone County Attorney Dennis Paxinos pauses as he addresses the sexual harassment and retaliation complaint against him during an interview with The Gazette Tuesday, February 23, 2010.
MATT HAGENGRUBER Of The Gazette Staff

Yellowstone County Attorney Dennis Paxinos struck back Tuesday against accusations by a former employee that he sexually harassed and assaulted her.

The former employee, Stacie Muhlbeier, has accused Paxinos of continued sexual harassment over a nine-year period and a 2003 incident in which she said Paxinos forced himself on her in an office conference room.

Paxinos said Tuesday morning that Muhlbeier, a former legal assistant, sought “hush money” from the county before going public with her accusations. He also turned over to The Gazette text messages and all e-mails between the two that are in his possession, he said. The messages show that Muhlbeier never felt threatened by her boss, Paxinos said.

“I don’t think there’s any mistake. She wants money and she’s after me,” Paxinos said in a visit to The Gazette.

Paxinos said he could no longer stay silent after Muhlbeier essentially accused him last week of attempting to rape her.

Paxinos again said the office encounter in March 2003 was consensual, and he offered his version of what happened. Paxinos said he was walking an “obviously tipsy” Muhlbeier to her car after a celebration at nearby Jake’s restaurant when she realized that she had left her purse in the office.

They both returned to the courthouse and went to their desks. Minutes later, they bumped into each other at a blind corner outside the office conference room. They began kissing, fell to the floor and things escalated, but Paxinos said he stopped Muhlbeier before the pair could have sex.

Paxinos then said Muhlbeier suggested they get a motel room or go back to Jake’s, but Paxinos offered to get her some coffee. They drove to Paxinos’ house so he could make her coffee, but Muhlbeier refused to go inside after she learned that Paxinos’ wife was home, he said.

“I’m not proud of this,” Paxinos said. “I’m a 50-year-old man; I’m flattered by all the attention from this woman. My id was fairly aroused, but I stopped it.”

Muhlbeier has maintained that Paxinos followed her back to the office after the party, where he tried to force himself on her in the conference room. In a complaint sent to the Montana Attorney General’s Office, Muhlbeier gives her version of what happened.

“I tried to push him away as he attempted to have sexual intercourse with me,” Muhlbeier wrote. “Because he was intoxicated, he was unable to achieve an erection.”

Muhlbeier said Paxinos then tried to perform oral sex on her, but she pushed him away and he allowed her to leave.

Paxinos said Muhlbeier was a good employee until her last year in the office, when she started drawing complaints from judges and others that she wasn’t getting her work done. Her supervisors placed her on two work improvement programs, but she took medical leave from the office and resigned late last fall, Paxinos said. Muhlbeier never mentioned sexual harassment or assault until after she left the office, Paxinos said.

“She just deteriorated, and I became the scapegoat,” he said.

In e-mails as recent as last July, Paxinos and Muhlbeier engage in playful banter, using Internet slang and often discussing their drinking habits. In one e-mail, Paxinos checks in on Muhlbeier on a Thursday afternoon. The subject of the e-mail is “R u there.” Muhlbeier replies that she’s still working.

“U should b at hanks!” Paxinos replies, referring to a downtown micro brewery.

“I will be soon enough,” Muhlbeier wrote back. “Gotta pick up keg and growlers for party tomorrow. But work has to come first.”

In BlackBerry messages sent to Paxinos in August, Muhlbeier says she prefers text messages because, “No tracers (this) way and costs nothin.” She also gets upset with Paxinos on Aug. 18.

In a flurry of messages sent to Paxinos that day, she accuses him of “blindsiding” her with “political (expletive).”

“If that is the game you need to play to cover your ass then so be it. But u know after working with me for how many years what works and what doesn’t work. Yet you continue to say one thing and blindside me with the other,” Muhlbeier wrote.

According to county records, Muhlbeier left her job on Nov. 17. She then filed a grievance and a complaint with the county in early December in which she asked for money from the county.

County commissioners hired an outside investigator to look into Muhlbeier’s accusations against Paxinos. The investigator found that the accusations could not be substantiated but said he acted improperly and should be reprimanded.

In her complaint with the Attorney General’s Office, Muhlbeier claimed that the commissioners offered her money to settle the matter quietly. The commissioners have denied that.

On Tuesday, Paxinos turned over to The Gazette typed notes by Sheriff Jay Bell, who met with Dave Muhlbeier on Nov. 4. Dave Muhlbeier is a Yellowstone County Sheriff's deputy.

Bell wrote that Dave Muhlbeier explained to him that Paxinos had been sexually harassing his wife. Bell said Muhlbeier indicated that Stacie Muhlbeier “was looking for something monetarily.” Bell then met with two of the three commissioners and Deputy County Attorney Kevin Gillen to discuss how to proceed.

“I was authorized by the commissioners to get back David to see what it might take just to make this go away and satisfy Stacy,” Bell wrote.

Told of Paxinos’ comments to The Gazette, Muhlbeier said Paxinos is still trying to intimidate her. She said that a member of Paxinos’ family tried to contact her in recent days using Facebook.

“He’s trying to intimidate me into shutting my mouth,” Muhlbeier said. “I realize the can of worms I’ve opened. How else am I going to make this man stop?”

“This has never been about money for me,” she said. “This is stuff that I have been repressing all of these years. I can’t keep repressing this. He is a vicious man. He is the one who did this to me.”

Muhlbeier’s complaint is now in the hands Attorney General Steve Bullock. His office said last week that it is reviewing the complaint.

E-mails between Paxinos and Muhlbeier

Text messages between Paxinos and Muhlbeier

Minutes before a scheduled court hearing on the matter, the Yellowstone County Attorney’s office this morning turned over to The Billings Gaze…

Yellowstone County Attorney Dennis Paxinos admitted Tuesday to a sexual encounter with an employee who subsequently left his office, but said …

Yellowstone County Commissioners voted Tuesday to hire an outside attorney to help determine how the county can discipline elected officials.

Yellowstone County Attorney Dennis Paxinos hands over a stack of e-mails relating to a sexual harassment and retaliation complaint against him during an interview with The Gazette Tuesday, February 23, 2010.

Yellowstone County Attorney Dennis Paxinos addresses the sexual harassment and retaliation complaint against him during an interview with The Gazette Tuesday, February 23, 2010.

Yellowstone County Attorney Dennis Paxinos pauses as he addresses the sexual harassment and retaliation complaint against him during an interview with The Gazette Tuesday, February 23, 2010.
© Copyright 2021 Billings Gazette, 401 N Broadway Billings, MT | Terms of Use | Privacy Policy
Powered by BLOX Content Management System from TownNews.com.
You don't have any notifications.