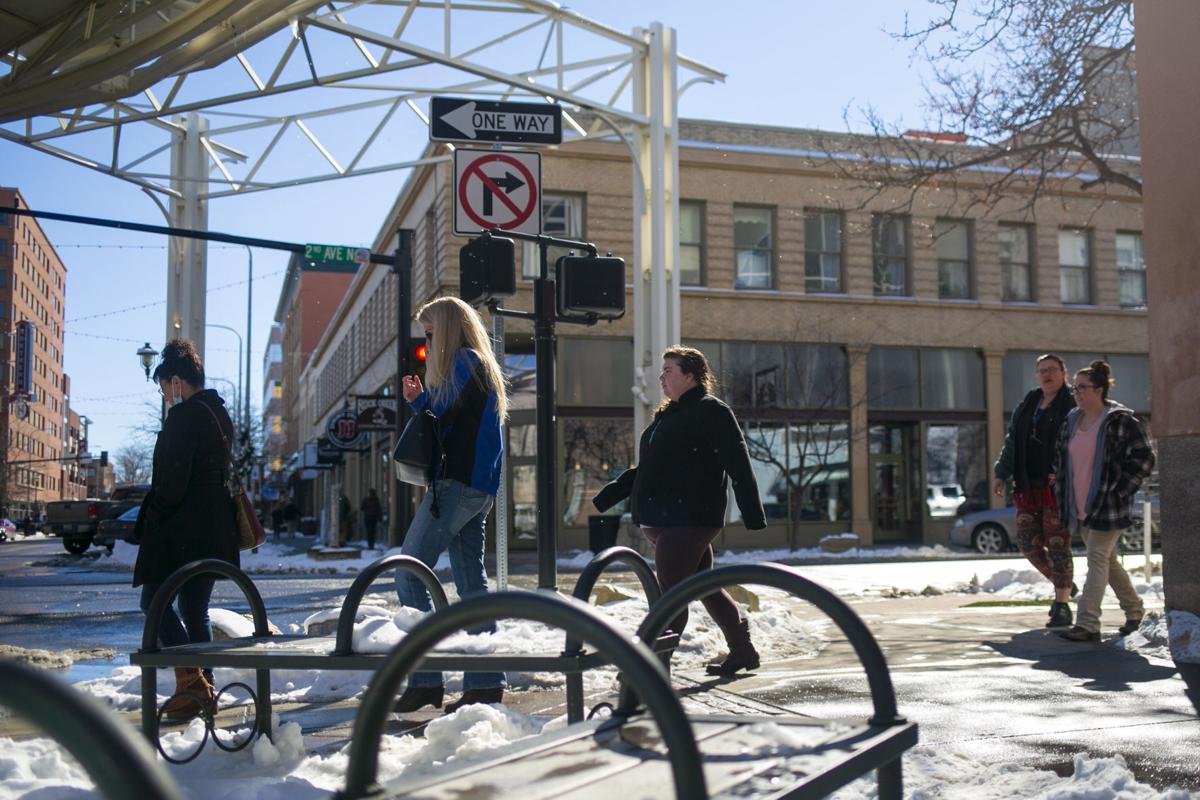 People walk through downtown Billings past a spot commonly occupied by panhandlers and drifters Friday in Billings. 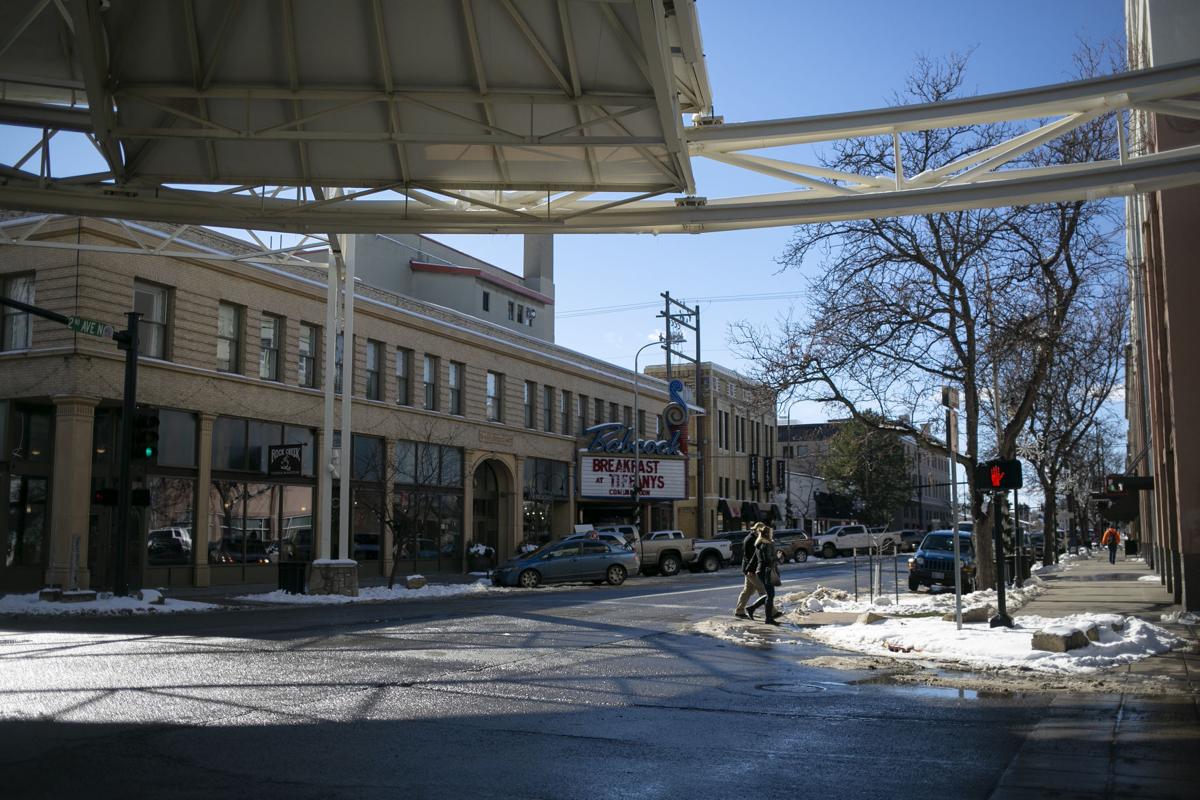 The responses, collected from 503 residents by the National Police Services Survey, also showed that while the bulk of those surveyed felt safe in the city's parks and downtown during the day, few did at night.

Just 31% said they felt either very safe or somewhat safe downtown at night, while 29% said so for parks and trails.

Both responses were what survey administrators consider "much lower" than the national benchmark. Their definition for "much lower" or "much higher" is 20 percentage points or more off the average response rate for all U.S. survey takers.

Brad Mansur is one of two Billings Police Department officers assigned only to downtown whose salary is paid for by downtown businesses.

Mansur said that while the downtown area does receive a higher volume of calls, that’s what he would expect for any area of any city where businesses were concentrated.

Most of the calls Mansur deals with are not violent. He responds to a lot of complaints the department calls “quality of life” problems, including trespassing, open alcohol containers, public urination and panhandling.

Mansur, who has been on the job for a year, is almost always familiar with the people prompting the call. He knows their individual histories, any triggers to avoid in conversation, and can usually gauge whether they might be open to an offer of a hot meal at St. Vincent de Paul or a ride to the Crisis Center to meet with their caseworker.

“We use it as a way to bring them back to reality, kind of,” he said. "‘Hey, remember last summer when you were sober, how good you did?'”

Downtown calls that are violent are overwhelmingly between people who know each other, and not between strangers, Mansur said. Police activity at night is most often tied to the bar crowds, he said.

Mansur said he’s watched as drivers try to edge each other out, waiting for a parking spot directly in front of the downtown business they plan to visit. Meanwhile, he said, drivers willingly park in the busy parking lot at a Walmart and do “not think twice about their safety.” Still, Mansur said, Walmart generates a lot of police calls, some of which are for violent crimes like robberies or assaults.

“And it’s not even on their radar,” he said. “So it’s kind of, perception [of downtown] is way more of our issue than actual crime.”

The 503 people who took the survey view local police in a more favorable light than other survey takers around the country tend to: 79% felt the Billings Police Department acts in the best interest of the community; 78% felt officers act within the law; and 77% rated local police as trustworthy.

Those response rates were "much higher" (meaning 20 percentage points or greater) than the average national responses.

Just 7% of survey takers, or approximately 35 individuals, identified as “not white alone.” No further racial or ethnic breakdown was given. Their responses were then weighted to account for 10% of the Billings population.

Those roughly three dozen people of color who took the Billings survey gave generally higher ratings than white survey takers did on their perceptions of the police department.

Respondents ranked several categories of both violent and non-violent crimes as bigger concerns locally than did respondents around the U.S.

For instance, survey respondents were asked to consider 35 categories of crime or nuisance, such as burglaries, drunken driving, child abuse or littering. In 24 of those categories, the number of Billings survey takers reporting the issue to be a major or moderate problem locally was "much higher" than than the national benchmark.

“I think that’s what you're seeing in the survey there, is just a reflection of, people can be satisfied with the department, but the community still has its issues,” said Lt. Brandon Wooley.

Broader self-identifying racial and ethnic categories were omitted due to Billings' low population of racial minorities, according to the report. Responses were only reported by group for subgroups with 10% or more of the population.

The survey noted that lack of distinction "may mask experiences/perceptions of specific ethnic and race groups."

The Midget Restaurant, circa 1903

Downtown Billings traffic could move away from one-way streets

One-way traffic in downtown Billings may end up going the way of the Western Bar.

A national policing study has concluded that the Billings Police Department is overworked, understaffed and lacks adequate facilities.

People walk through downtown Billings past a spot commonly occupied by panhandlers and drifters Friday in Billings. 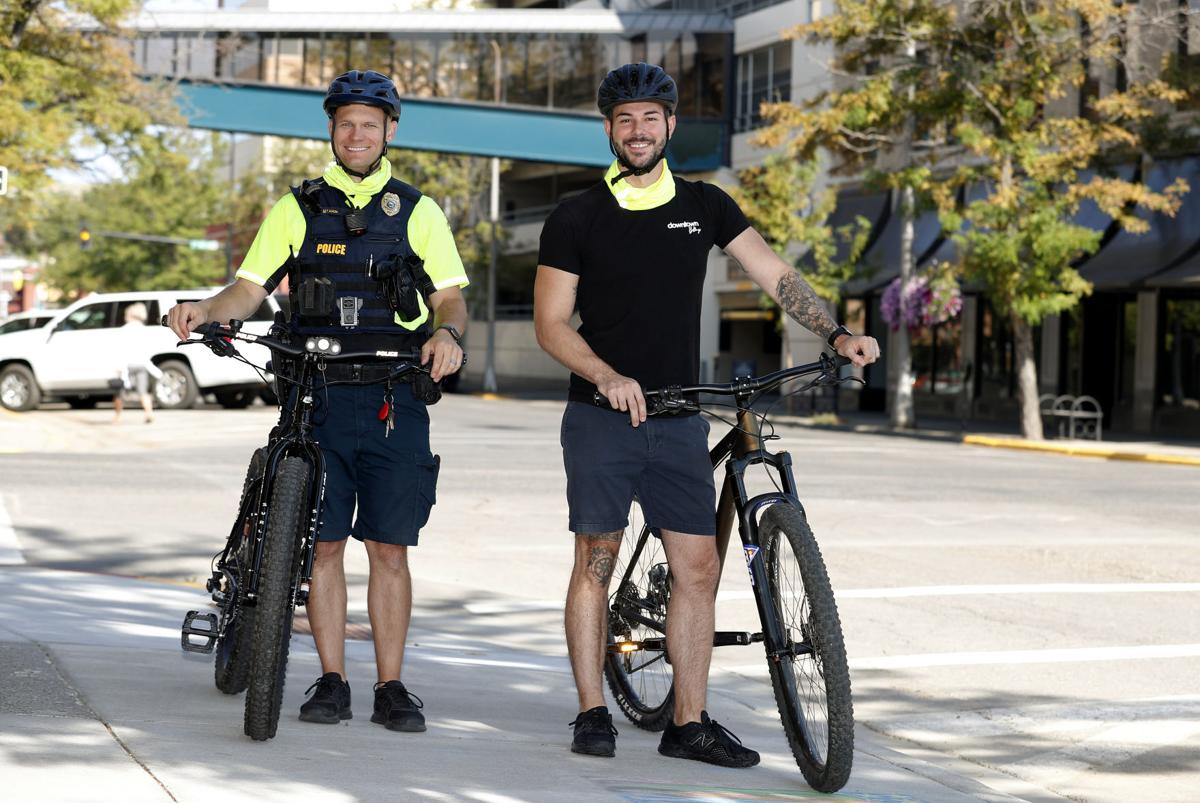 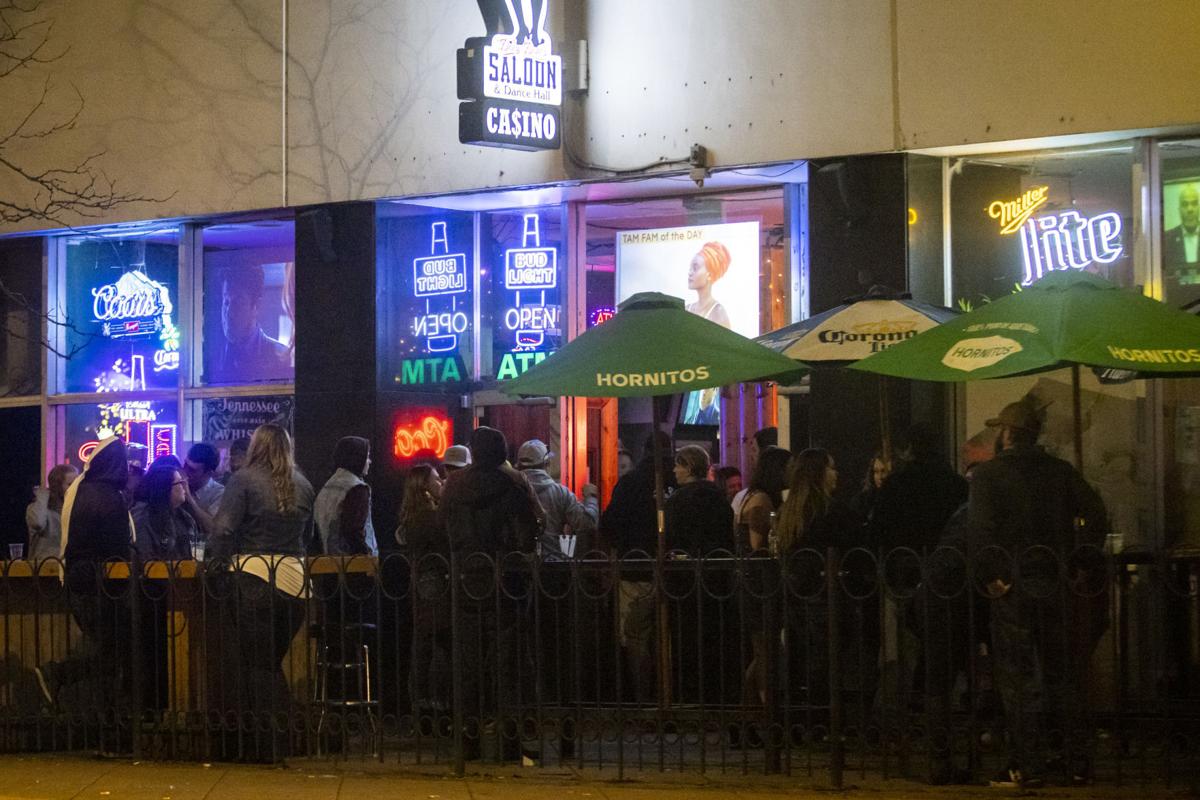