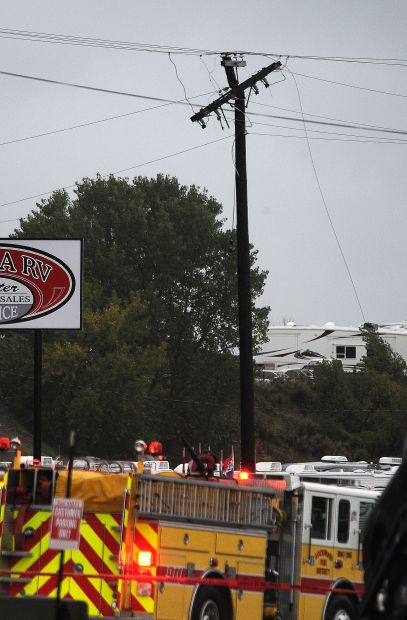 Lockwood Fire and Rescue responded to a power pole fire that closed Highway 87 East as well as the Dick Johnston bridge on Thursday at about 8 a.m. 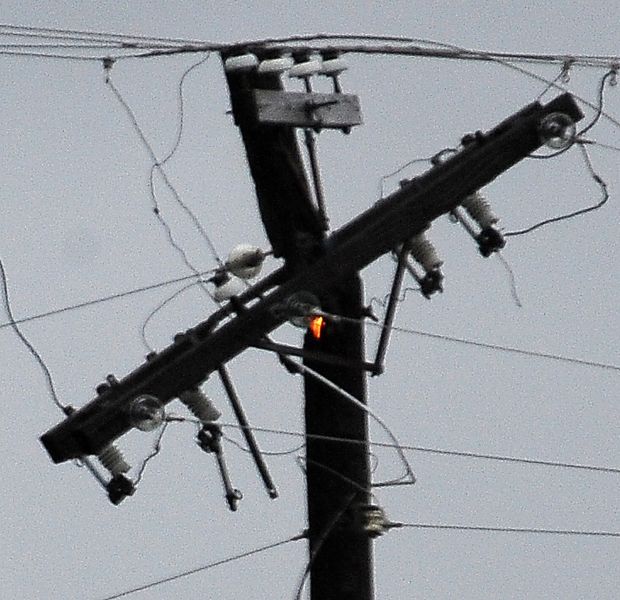 Fire is visible on a power pole that started on fire after a transformer exploded on Thursday morning.

A power pole caught fire on Highway 87 East between Lockwood and Billings on Thursday morning, snarling the morning commute and cutting power to several hundred customers in Lockwood.

The pole caught fire at about 8 a.m. near Metra RV, 850 Highway 87 E., just east of the Dick Johnston Bridge over the Yellowstone River.

It wasn't immediately clear why the pole caught fire, although NorthWestern Energy officials thought it was weather-related.

"We are suspecting some sort of weather-related issue," said Butch Larcombe, NorthWestern spokesman, in an email. "There was a fire on the pole, which can be caused by heavy rain and one of the lines on the pole fell across the road. It’s unlikely we will know what exactly happened."

Traffic backed up more than a half-mile while the road was shut down and crews worked to repair the line. Law enforcement directed traffic onto Interstate 90 until the roadway was reopened at about 11 a.m.

The outage also affected Coburn Hills, where several television and radio systems are located. The systems ran by generator power until about 11:30 a.m., Larcombe said.

The surge of COVID-19 in Montana continues to swell.

A portrait tattoo from Tim Nava while he was at United States Penitentiary in Leavenworth, Kansas, used to cost his clients about $50.

Woman gets 40 years in strangling death of Dillon man

DILLON — A judge sentenced 21-year-old Sandy Rose Moore to 40 years in the Montana Women’s Prison on Tuesday for strangling an older boyfriend to death in a rental home they shared here.

SCL Health today announced that Jen Alderfer has been named president of the Montana Region and St. Vincent Healthcare.

With ARPA dollars burning a $6 million-hole in the City of Billings' pocket, officials will take the one-time money and purchase the Stillwate…

Twenty Yellowstone County residents have died from COVID-19 related illness so far in October, including two men whose deaths were reported Fr…

The deaths of three Yellowstone County residents were reported Wednesday, according to county health officials.

An early winter storm is forecast to bring the first heavy snowfall of the season to portions of the U.S. Rocky Mountains this week.

Lockwood Fire and Rescue responded to a power pole fire that closed Highway 87 East as well as the Dick Johnston bridge on Thursday at about 8 a.m.

Fire is visible on a power pole that started on fire after a transformer exploded on Thursday morning.