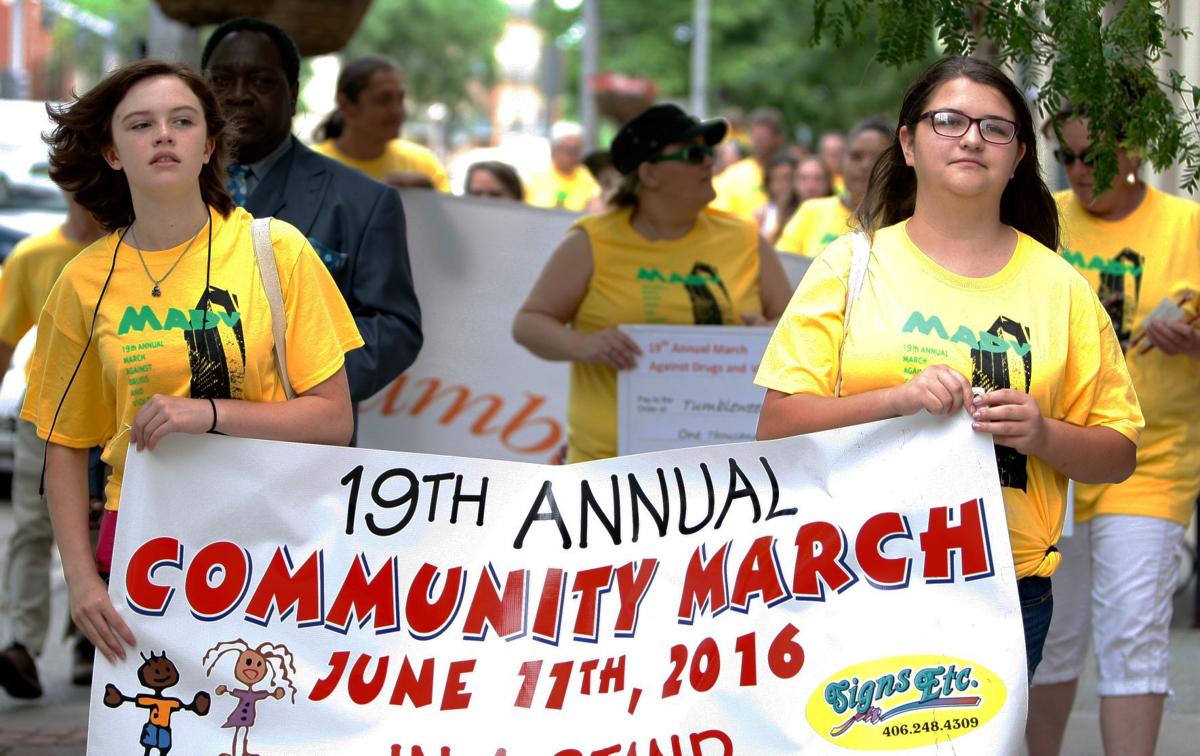 Bayley Reiter, 15, left, and Grace Devries, 15, were part of the annual March against Drugs and Violence in 2016. 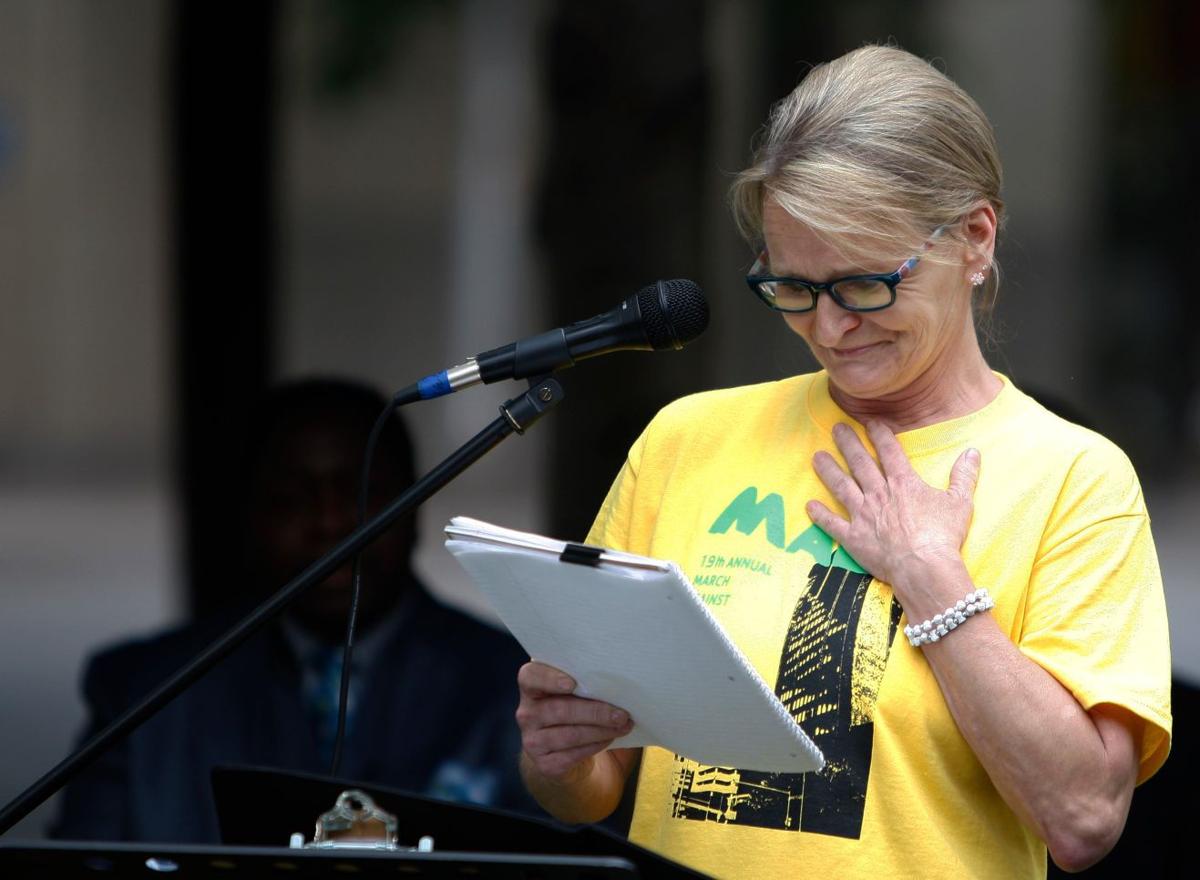 Robin Stewart becomes emotional when thanking her parents for helping her children while she was struggling with addiction at the March Against Drugs and Violence on Saturday. 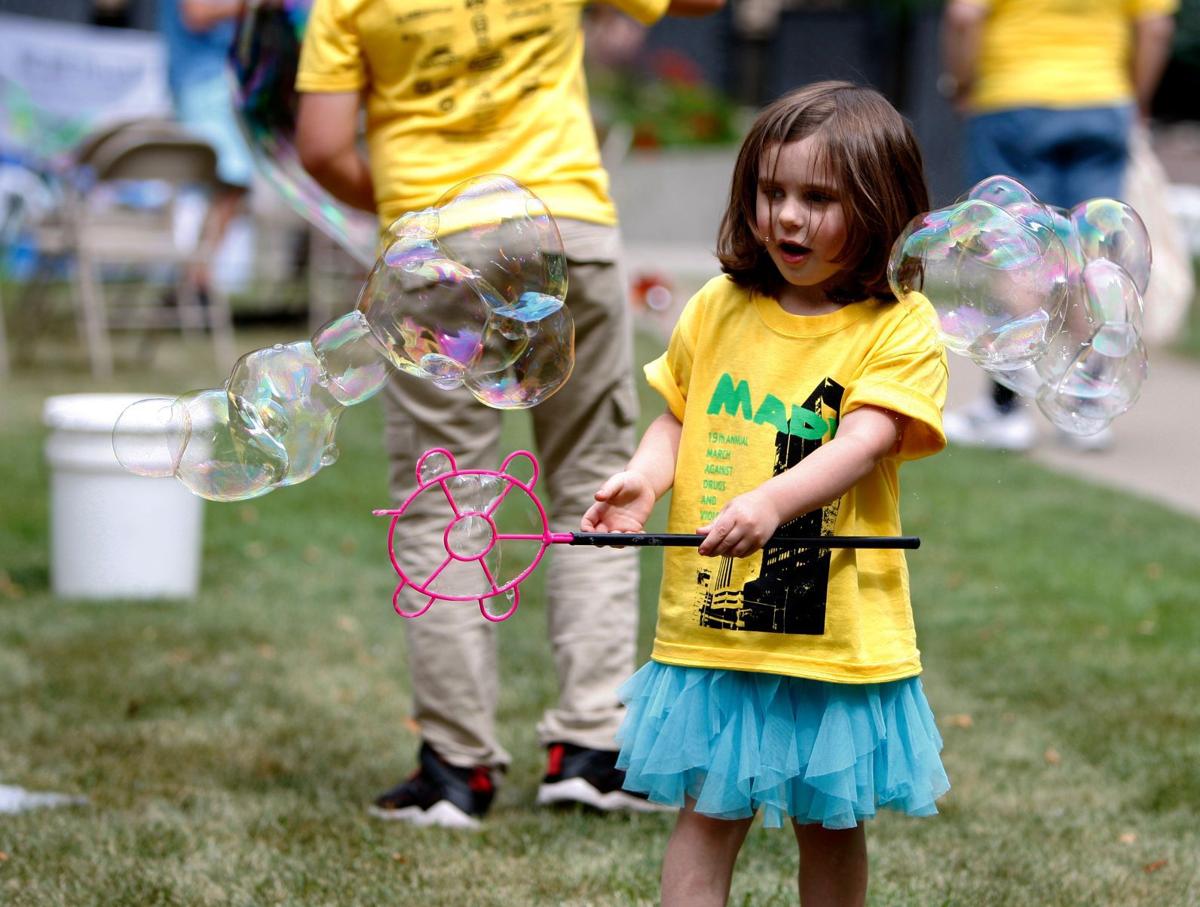 Arabella Friedel, 4, enjoys the bubble station at the March Against Drugs and Violence event on Saturday.

Not only did Robin Stewart bring tears to the eyes of her family attending the 19th annual March against Drugs and Violence on Saturday, she opened up some tear ducts among the more than 100 others in attendance, too.

Stewart, 53, of Helena, is one of about 200 residents at Passages, a women’s community-based correctional facility and therapeutic community in Billings.

The event keynoter, Stewart said she began as an adolescent smoking cigarettes and then marijuana before taking other drugs — many of them prescription drugs. Substance abuse has had catastrophic effects on her loved ones, she said — a daughter is incarcerated, a brother was killed in a shooting and the father of her children died by suicide.

“They died,” she told the crowd, “before I could make my amends.”

“I’m older now,” she said, tearing up herself, “and I’m open to all the help that’s available. I’m learning to be my true self, but doing the right thing can be a lonely place.”

One of the event organizers, Adam Liberty, community engagement coordinator with the Friendship House of Christian Service, noted that this year, the emphasis is on helping parents to intervene by noticing a young person’s ABCs — Appearance, Behavior, Companions and School.

Changes in any of those can be an in indicator of substance abuse, said Billings City Councilmember Mike Yakawich, who’s been the guiding force behind each of the 19 marches.

“Gathering leaders and community members together shows how great our city is, united in working and addressing substance abuse and violence,” he said.

Over the past two months, volunteers have addressed a number of service organizations and other groups, distributing more than 300 magnets featuring the ABCs.

“We heard this over and over: ‘I was a crappy parent, but I’m going to be a better grandparent,’” Yakawich said.

Event partners raised $3,000 to help put on Saturday’s march, which included a barbecue, swag bags, games for young people, T-shirts for attendees of all ages and a $1,000 donation for the work of the Tumbleweed program for homeless youth.

Redwillow Horsecapture, the 17-year-old girl who survived a May 6 attack on the Rims, gave organizers a plaque to show her appreciation for their support.

“You’ve made me feel I’m not alone in my journey to get better,” she said.

Before organizers dismissed the crowd to march the downtown streets, District Court Judge Russell Fagg had this to say to the crowd, which had gathered on the courthouse lawn beneath his courtroom: “Wouldn’t it be great if we got rid of the drug abuse problem in Montana? It would literally put half the judges out of work.”

While some in the crowd chuckled, Fagg noted that the U.S. incarcerates more people per 100,000 population than any other nation. Half of U.S. inmates are behind bars for drug offenses. Taxpayers spend $30,000 annually on each person incarcerated, and about one-fifth that total — $6,500 — to educate each child.

“Something is amiss here,” Fagg said. “We have lost the war on drugs, but there are alternatives,” including offering drug treatment programs and keeping people working during and after their treatment — as does Stewart, who works at Stella’s Kitchen and Bakery.

“What you’re doing,” Fagg told the crowd, “is incredibly important to the youth of Montana. God bless you and keep up the good work.”

A man walking his dog on the West End of Billings Friday evening told police he found an unclothed body in a ditch.

Two killed, one wounded in shooting on South 37th Street

Two men were shot dead and a third was wounded in a rolling shooting that led to a vehicle crash on Billings South Side Tuesday morning, according to Billings police.

At least 50 people gathered to memorialize 15-year-old Khoen R. Parker who was shot and killed in an altercation on Monday.

An Indiana correctional officer has been charged with multiple counts of sexual assault in Yellowstone County District Court.

Court filings show that Dale Wayne Eaton, who was convicted of the 1988 murder, rape and kidnapping of Lisa Marie Kimmell, is set to receive a non-capital sentence.

Bayley Reiter, 15, left, and Grace Devries, 15, were part of the annual March against Drugs and Violence in 2016.

Robin Stewart becomes emotional when thanking her parents for helping her children while she was struggling with addiction at the March Against Drugs and Violence on Saturday.

Arabella Friedel, 4, enjoys the bubble station at the March Against Drugs and Violence event on Saturday.