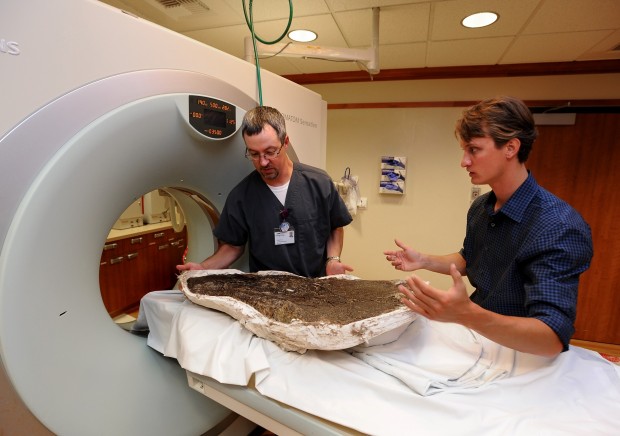 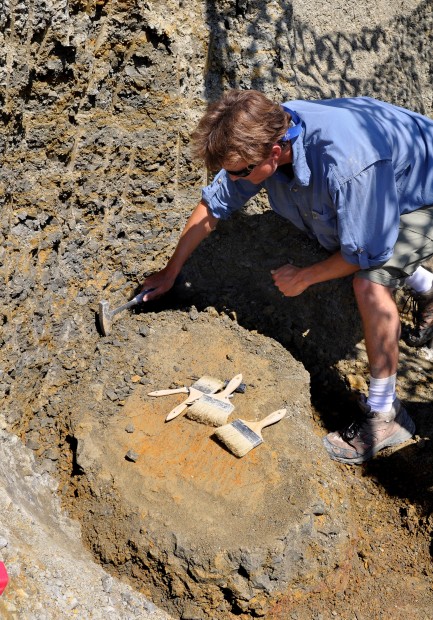 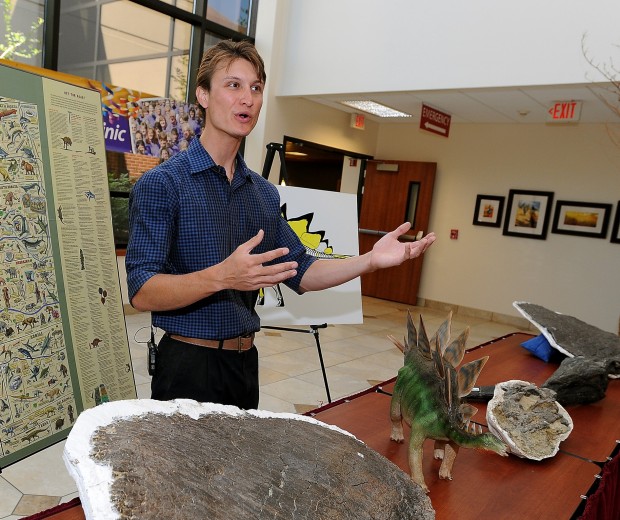 Princeton University researcher Evan Saitta discusses his effort to identify the sex of stegosaurs with a CT Scan at Billings Clinic on Thursday. 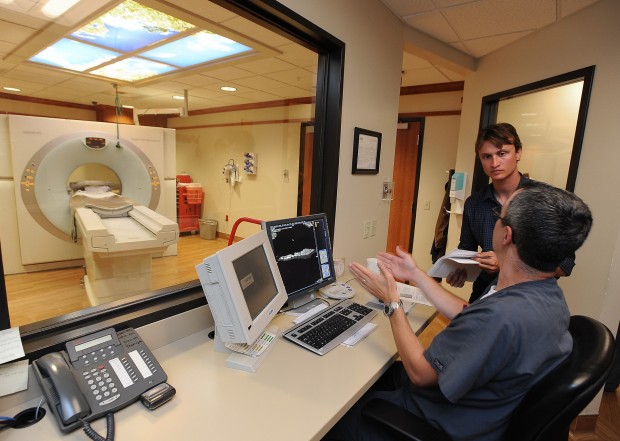 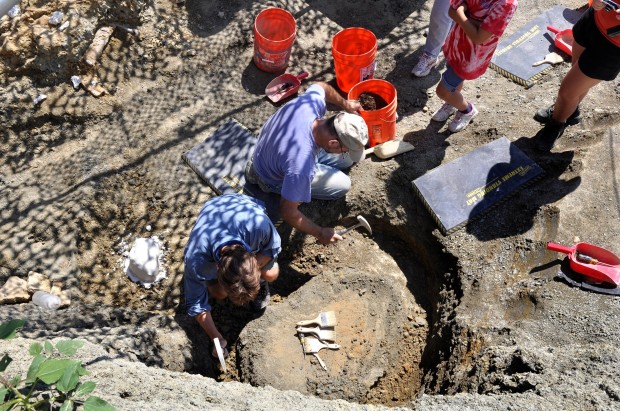 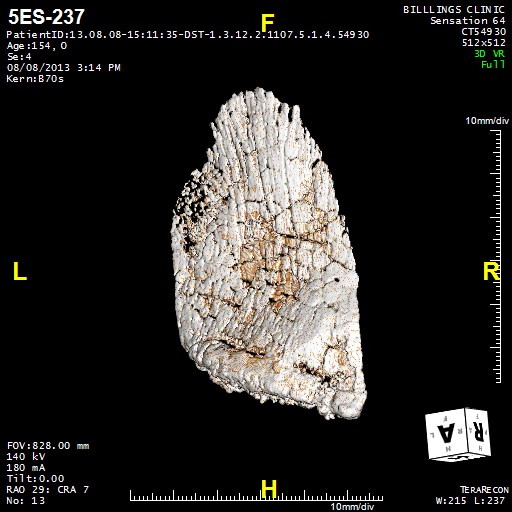 A CT scan of a stegosaur plate at Billings Clinic on Thursday yielded a three-dimensional image of the 150-million-year-old fossil.

Evan Saitta, a rising senior at Princeton who has been digging dinosaur fossils north of Billings for five years, made the history books Thursday.

While scanning a series of 150-million-year-old stegosaur fossils at Billings Clinic, he made a breakthrough step in finding a way to differentiate between male and female stegosaurs.

The elephant-sized herbivores have two pairs of defensive tail spikes and two rows of plates that run along their spines. At a dinosaur quarry in the Little Snowy Mountains about 2 hours north of Billings, Saitta and a number of other researchers have unearthed the remains of four stegosaurs.

In the past, many unearthed stegosaurs plates have been wide and oval shaped, Saitta explained.

“And we have found four of these,” he said. “But what’s exciting is that we also found, basically the exact opposite — we found tall, narrow, almost pointed plates, too."

Saitta’s idea was that males and females have differently shaped plates. The first step in proving that hypothesis came while he and other researchers and analysts were using a CT scanner at Billings Clinic.

Using the scanner, they were able to see inside the plates and spot canals in the bones that showed the differently shaped plates both came from adult stegosaurs.

“The question is which is female and which is the male,” Saitta said. “But there are some ways to test this, and that’s going to be the next step.”

Female birds and dinosaurs store up calcium deposits in their bones before they lay eggs, he explained, so finding these deposits in a stegosaur’s bones could indicate its gender.

“Whether or not we see that is kind of luck of the draw,” Saitta said, because the calcium deposits would only be found if the female stegosaur died shortly before laying eggs.

Scanning the fossils at Billings Clinic ties in with the educational and research aspects of the Billings Clinic Foundation’s mission, said Jim Duncan, who is president of the organization.

“We had an opportunity for our staff and family to come learn from him and the kids were just mesmerized by what they were hearing,” he said.

Saitta, who has been a fan of dinosaurs and fossils since he was a kid, said his best advice for kids interested in becoming paleontologists is that they should do really well in school.

“This is awesome, this is awesome,” Saitta said of his work on the project, which is his senior thesis at Princeton. “And the fact that I’m doing this as an undergrad is really special because normally you don’t get to do this until grad school.”

The Little Snowy Creek stegosaur dig is unique for a couple of different reasons, Saitta explained.

“This site is the furthest north of any late Jurassic dinosaur site,” he said. “It’s older than most dinosaurs you find this far north.”

People have been digging up stegosaur fossils for more than 100 years, but the site north of Billings is the first place where multiple stegosaurs have been found together, he added.

“The thing that’s so unique about this is that it’s in our own backyard,” said Duncan, who recently visited the dig and helped unearth some stegosaur fossils there.

For Billings Clinic to be able to help Saitta and Princeton with a ground breaking project that has such a strong connection to Montana is incredible, he said.

A 59-year-old man was struck and killed in the 5400 block of Midland Road on Wednesday about 5 p.m., according to a tweet from the Billings Po…

The Billings Police Department are investigating an armed robbery that occurred on the 5000 block of Midland Road at about 8:20 Monday morning.

Princeton University researcher Evan Saitta discusses his effort to identify the sex of stegosaurs with a CT Scan at Billings Clinic on Thursday.

A CT scan of a stegosaur plate at Billings Clinic on Thursday yielded a three-dimensional image of the 150-million-year-old fossil.