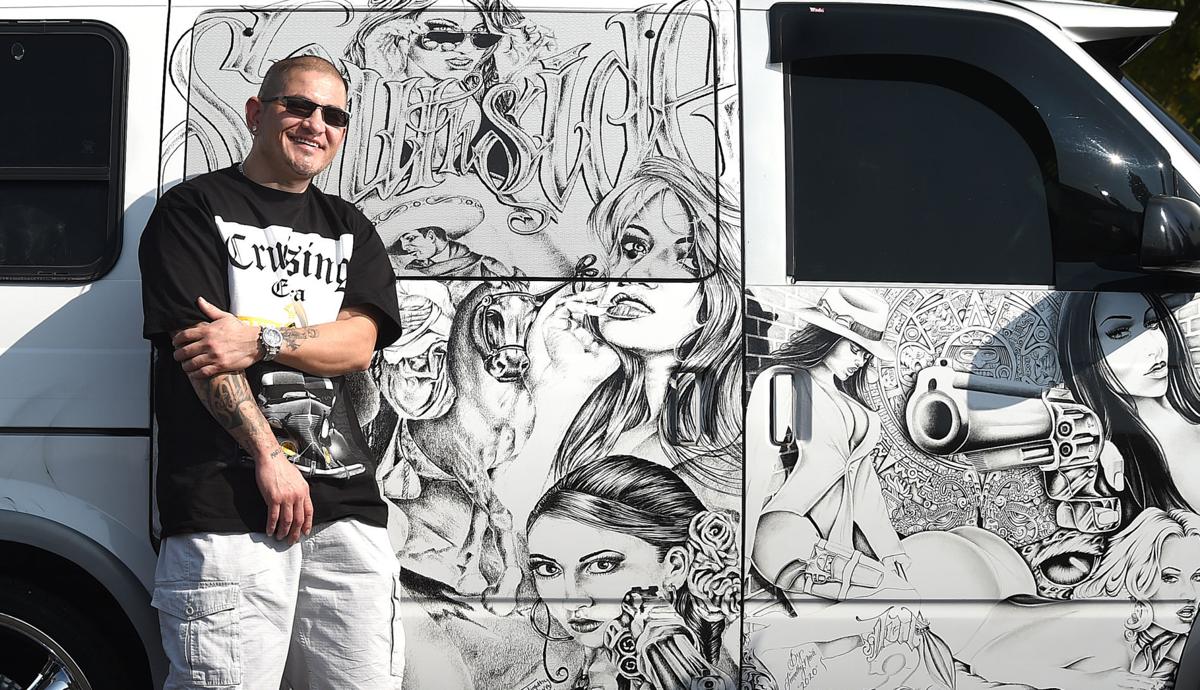 Tim Nava's artwork is shown on his father Victor Nava's van. Tim opened Tat 2 Connect at 106 South 31st Street after spending much of his life in prison. 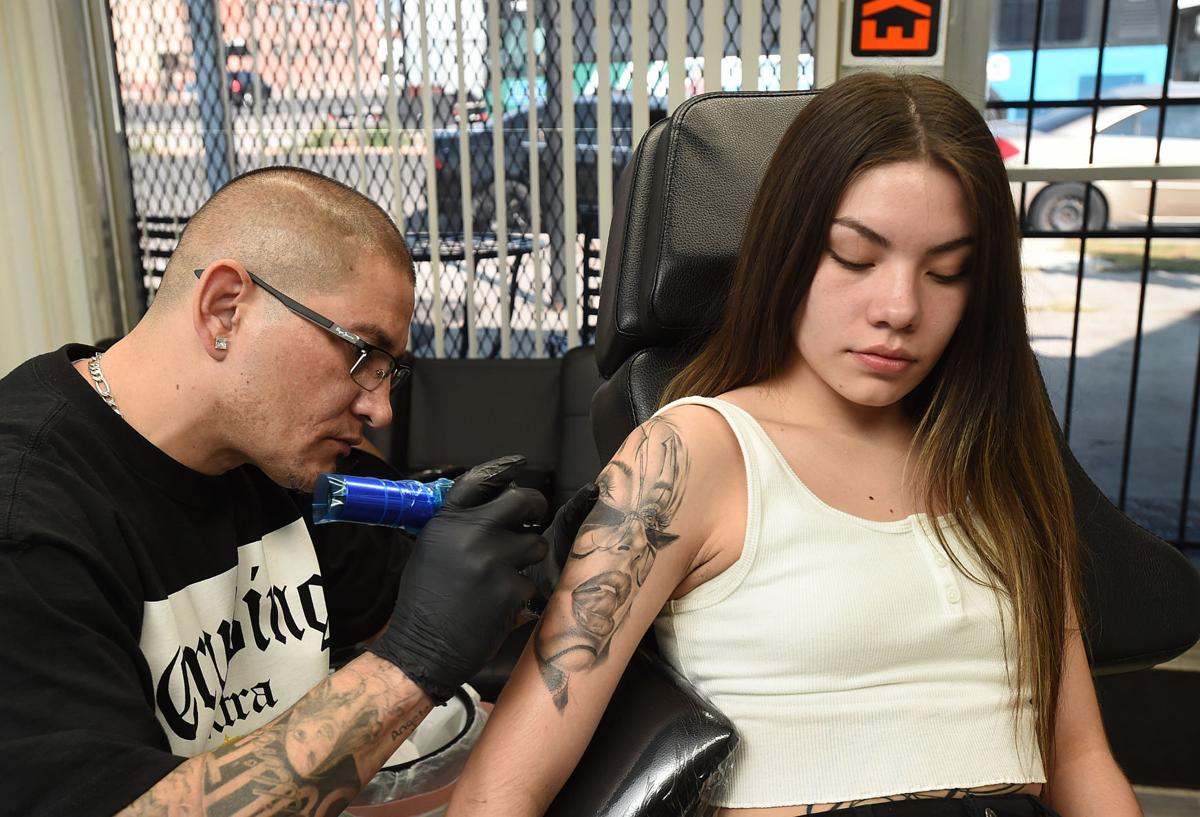 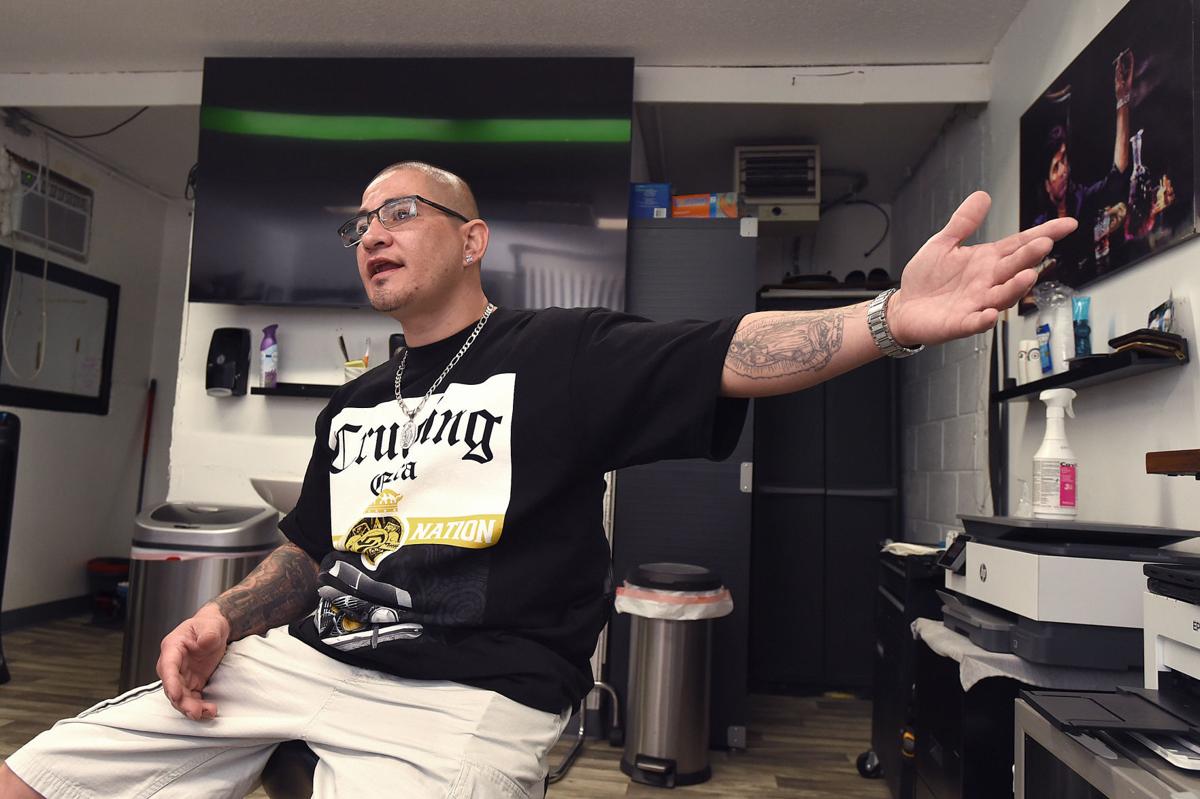 Tim Nava talks about opening Tat 2 Connect at 106 South 31st Street after spending much of his life in prison. 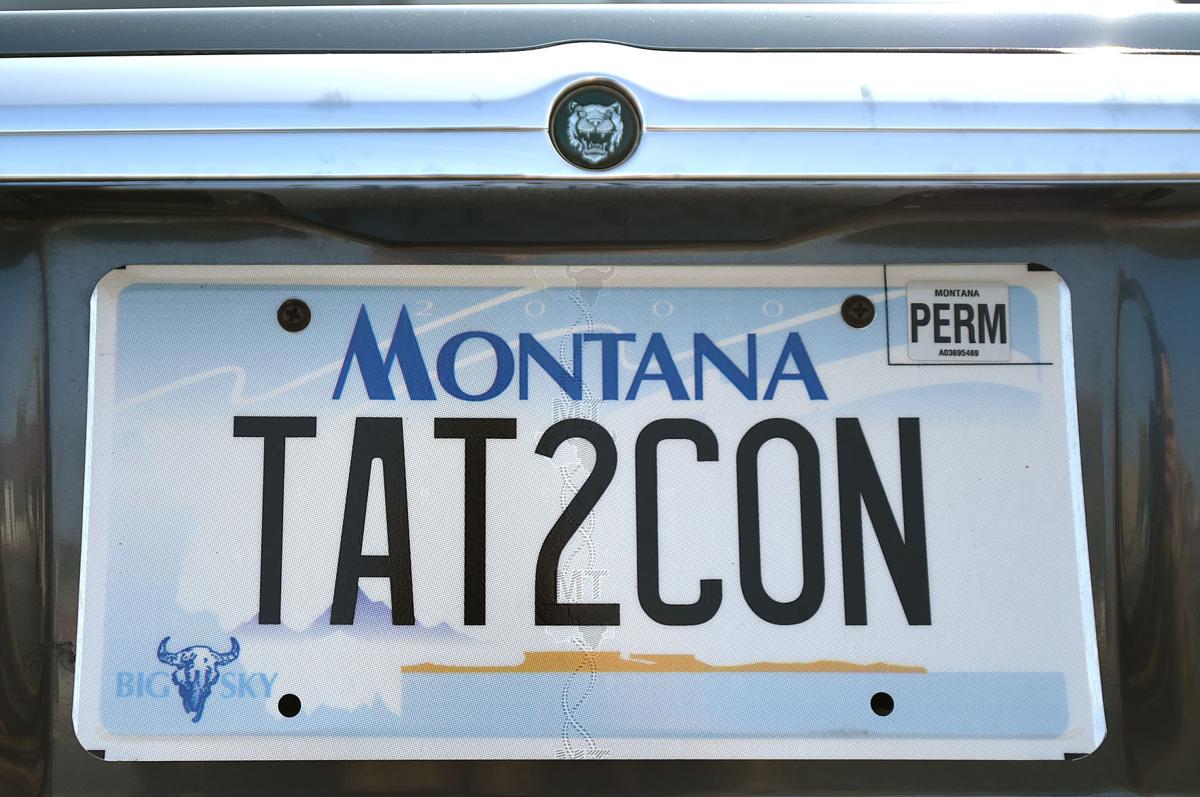 Tim Nava opened Tat 2 Connect at 106 South 31st Street after spending much of his life in prison.

A portrait tattoo from Tim Nava while he was at United States Penitentiary in Leavenworth, Kansas, used to cost his clients about $50.

With a length of dental floss tied to a soda can serving as an alarm, the father of five and convicted drug dealer worked with a tattoo gun rigged from a hair clipper motor and guitar string. The guitar string punched the skin and filled it with dye mixed from soot and coffee grounds. In just a few hours, a woman’s face started to form.

“The art of a woman is God’s creation,” said Nava, a Billings native who returned to his hometown after spending a little over 15 of the past 20 years in prison.

The tattoos that paint Nava’s torso range from common and simple (three black dots between the thumb and forefinger of his right hand), to pornographic (a naked women having sex on his back), to personal (a portrait of his late brother, James Joe Nava, on his chest). Letters across his chest spell out his last name, and detail the images that permeated the last 41 years of his life: drugs, guns and prison walls. All of his tattoos are in black. It’s hard to make colored ink in prison.

Nava has served time in prisons in six states stemming from drug convictions. He was found guilty of homicide when he was 15 years old, shooting a man on the same block where he now runs a business. A sign reading “Tat 2 Connect” sits in front of his tattoo parlor on S. 31st Street where he grew up. Before he graduated high school, Nava was in a federal penitentiary. He also became a father.

His own kids, now grown and with their own lives and jobs, come in and out of the shop. These days, a portrait from Nava will typical cost customers about $500.

In 2002, a U.S. judge sentenced a 22-year-old Nava to nearly 15 years in prison. Already on probation for the 1995 homicide, Nava pleaded guilty to a charge of possession of meth with intent to distribute. During his sentencing, The Gazette reported that Nava told the court he needed prison to change his life after being a drug dealer since he was in the sixth grade.

"I used to be in the paper quite a bit back then," he said.

Nava told The Gazette the lifestyle he intended to leave behind followed him into the prison yard at Leavenworth. Gangs formed along racial lines, and drugs still seeped into the hands of imprisoned men, despite the walls and guards.

"That’s what people don’t understand out here. When you send someone to prison, instead of like treatment or something to help them, they get cliqued up. And once you get cliqued up, you’re really not doing your own time, you’re serving everyone else’s time," he said.

Prison protocol allowed Nava a monthly supply of a three envelopes and a notepad. To wash up, he had a tube of toothpaste the size of his thumb, a bar of soap and toothbrush. Anything else that he wanted, such as soap that could last him the whole month, or clothes he could exercise in, would have to be bought with cash at the commissary.

“I didn’t have income because all of my family was in prison,” said Nava.

Although many of his relatives have lived their entire lives with no convictions, Nava has cousins and siblings who all have served time in prison connected to drug charges. In 2002, just months before his own sentencing, his father Victor Robert Nava Sr. was given a life sentence for conspiracy and possession with intent to distribute meth, pot and prescription painkillers.

While he had no inclination for drawing before his incarceration, Nava picked up a pencil and paper and started tracing photos after five years inside of Leavenworth. After two more years of tracing and eventually creating drawings of his own, inmates started asking Nava for tattoos.

Tattoos are officially prohibited within most prisons, the same as buying, selling or using illegal drugs. Every prison sets its own policy as far as tattooing, and officials citing unsanitary conditions and the potential for a tattoo to provoke a fight as the reason for the ubiquitous ban. Sharing needles and ink leaves those incarcerated vulnerable to Hepatitis C, HIV and other blood-borne viruses.

Despite the risk, or in some cases because of it, the body artists in America’s prisons never want for clients. The first man to ask Nava to take a needle and ink to his body let the novice tattoo artist have free reign.

“I did something on his leg and I scarred him up a little bit. I kind of got discouraged,” Nava said.

On his second try on the man's other leg, he managed to complete a portrait. Until his release, Nava had both a steady income and a release that didn't involve drugs.

By the time he was paroled in 2013, Nava was confident enough in his skills to start looking for work as a tattoo artist. He left prison and headed to Las Vegas, where he had family. His history in Billings, he told the Gazette, was still to recent and he wanted to start fresh.

His first job was flipping burgers at a casino restaurant. Through connections with his family and friends, he managed to gain his first bit of professional experience in working in the tattoo industry. He landed a position at a shop, his talent allowing him to skirt an $8,000 apprentice fee. His time in Las Vegas came to an end when he was again arrested on drug charges.

“I had been out almost three years. I ended up doing somebody a favor. My buddy called me and he asked me to make a delivery for him. Me still having that criminal mindset, I delivered it. That one time messed up life again and it set me back five more years,” he said.

After his most recent stay in prison, Nava returned to Billings. His father, Victor Nava Sr., was there to meet him. Victor Nava was one of the last people to receive clemency from President Barack Obama on his way out of the White House. A white van driven by the elder Nava is now a billboard for Tat 2 Connect, showcasing the artwork that it took Tim Nava more than a decade to develop.

“I do more prison art. That’s how I express myself through that. I try to be versatile, but that's where I excel best … when you grow up in that kind of lifestyle you draw what you see,” he said.

Nava’s shop, connected to a youth boxing club run by his brother-in-law, has only enough space for a single station. Between Nava and a second artist he recently hired, he has amassed hundreds of clients since opening in December. His notorious last name, which he said is both a blessing and a curse, along with social media, have led to a steady stream of customers.

With little to no credit history, Nava’s ambition is to expand his operation and open a larger shop. Part of that expansion will be hiring artists who like Nava left incarceration with aims to enter the tattoo industry.

The Wyoming Highway Patrol seized 601 pounds of methamphetamine and 108 pounds of cocaine, worth more than $3 million, in a traffic stop near Evanston.

Tim Nava's artwork is shown on his father Victor Nava's van. Tim opened Tat 2 Connect at 106 South 31st Street after spending much of his life in prison.

Tim Nava talks about opening Tat 2 Connect at 106 South 31st Street after spending much of his life in prison.

Tim Nava opened Tat 2 Connect at 106 South 31st Street after spending much of his life in prison.