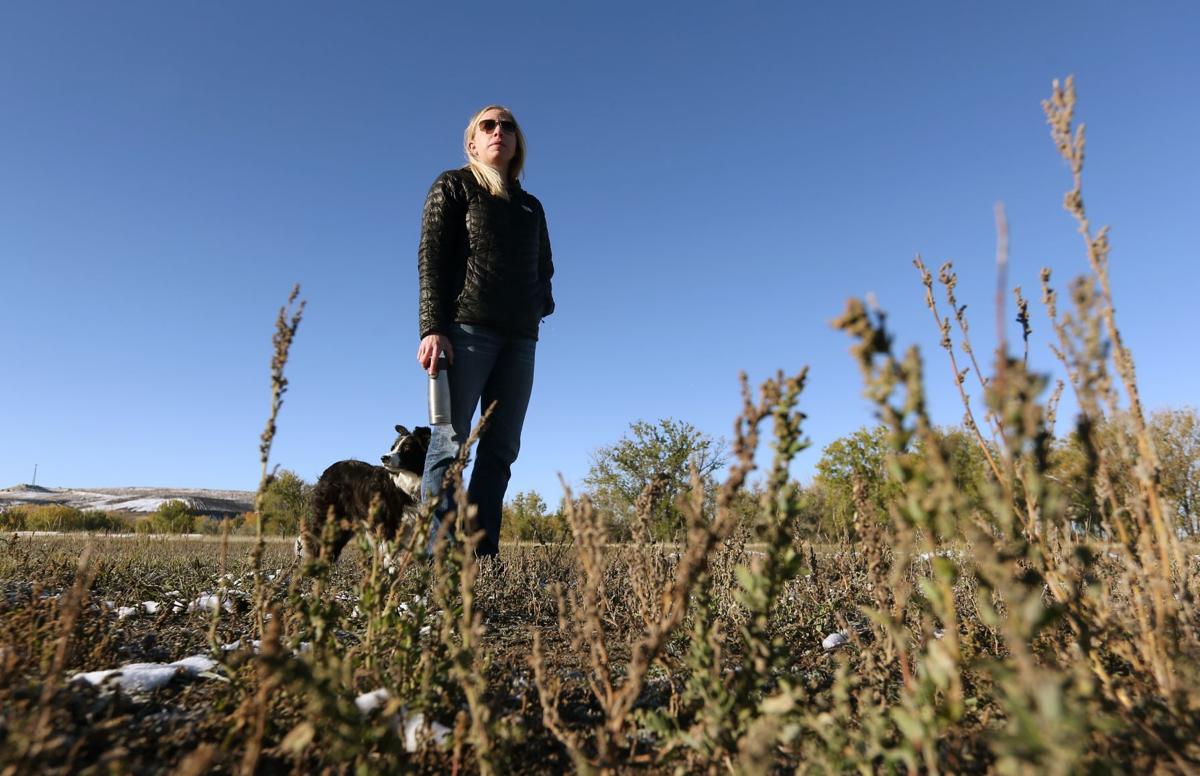 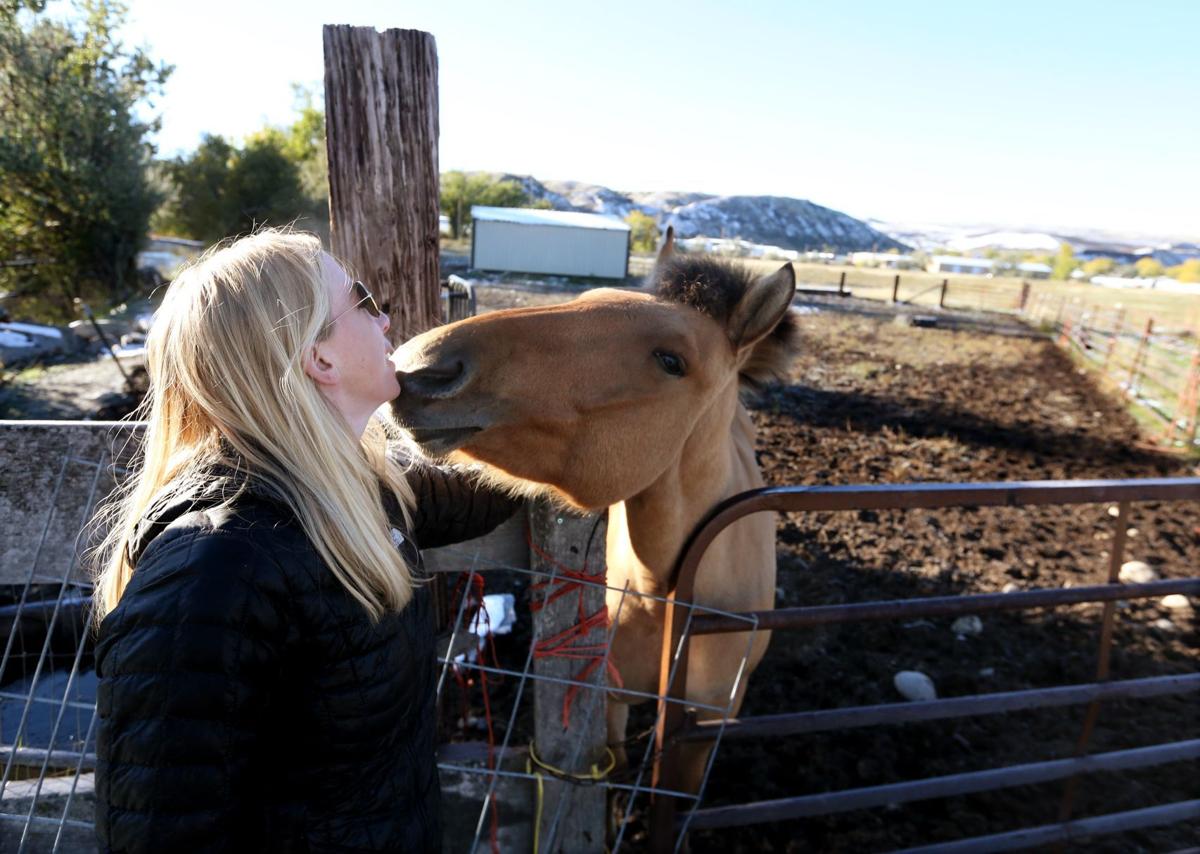 Alexis Bonogofsky greets her horse Sacha on her riverfront property in Billings that was damaged by the 2011 ExxonMobil oil spill.

Five years after the ExxonMobil Pipeline Co. spilled an estimated 63,000 gallons of oil into the Yellowstone River near Laurel, the Bonogofsky family’s former hay field next to the stream is still “basically weeds.”

“We couldn’t get anything to grow the first year,” said Alexis Bonogofsky, a writer, photographer and conservation activist. “Now at least things are growing, but it will take another year to get it back to where it was.”

Bonogofsky was one of about 30 people who attended a meeting in Billings on Wednesday night where the public could offer comments on how a $12 million damage settlement agreed to by ExxonMobil should be spent.

A draft restoration plan has already allocated percentages of the settlement to “preferred restoration types,” including: $3.56 million for terrestrial and riparian habitat; $2.09 million for large woody debris piles; $2.64 for aquatic habitat; $400,000 for American white pelicans; and $2.41 million for public recreation. The next step is identifying specific projects to fill those categories.

“First of all, I’m disappointed by the amount,” Bonogofsky testified at the meeting. “Exxon was making $5 million every hour in 2011.”

“It is a negotiation, like buying a car,” explained Doug Martin, of the state’s Natural Resource Damage Program, which hosted the meeting.

Specialists were brought in to assess the damage and come up with an amount, he added. How the money can be spent is spelled out in documents like the Oil Pollution Act of 1990.

“When we first came (to negotiations) with a number, ExxonMobil came back with zero,” Martin said.

A baseline survey documenting what’s in the Yellowstone River — from frogs to fish and turtles — was one of the ideas that Bonogofsky said was worth funding. She pointed to this summer’s die-off of whitefish in Paradise Valley as an example of where such reference information would be valuable.

“I think you are trying to do too much with too little. I’d like to see some prioritization,” she said.

Martin agreed, saying that $12 million seems like a lot when it’s all in one pile, but not when it’s broken up between several projects.

Steve Lehenbauer, who lives near the Yellowstone River where it meets the Clarks Fork of the Yellowstone River, said he would like to see the money concentrated on properties along the affected area. Analysis of the damage along the river estimated that 266 acres of shoreline suffered heavy to moderate damage from the oil spill.

Angler Eric Wolff, who fishes the Yellowstone River downstream from Billings, said more of the work should be concentrated in that section of the river, which he said is overlooked when it comes to work such as creating dam bypass for fish and boaters, as well as public access sites.

Wolff said he has a really hard time seeing proposals to spend money on the Laurel Pond or Lake Josephine fisheries, since those weren’t affected by the spill.

Some of the other people attending the meeting were there to advocate as partners for projects, from the Yellowstone River Parks Association to Our Montana.

“Generally, we like the tone of the restoration plan,” said Mike Penfold, of Our Montana, who suggested a portion of the settlement dollars go to help fund a cellphone app where recreationists could access the wealth of data Our Montana has collected about Yellowstone River access sites, history and recreation businesses.

Wendy Weaver, executive director of Montana Aquatic Research Services, said her group’s program of paying property owners not to riprap their river frontage blends well with the goals of the restoration plan by keeping the river in a natural state.

“Our partners are anybody who wants to work with us,” said Martin, of the Natural Resource Damage Program.

But those partners will have to meet certain criteria and then survive a ranking of the most important projects to get off the ground.

The entire restoration process is meant to “make the environment and public whole” again, following injuries to natural resources and “public use services.” For the Bonogofsky family, though, that doesn’t seem possible.

“If I had to do it all over again, I wouldn’t let them on our property,” she said of the cleanup crews, claiming they did more damage than the oil spill.

They were one of seven landowners along the river who sued the multinational corporation for damages rather than take ExxonMobil’s proposed settlement. The lawsuit resulted in a $2 million payout with the lawyers taking about a third, Bonogofsky said.

The family’s property, located across the Yellowstone River from Norm’s Island park, once provided grass for the family’s herd of 250 goats.

“We had to sell most of our goats,” Bonogofsky said. “Now we don’t have enough goats to eat all of the weeds we have.”

Still pending is a Clean Water Act violation that Exxon has yet to settle with the Environmental Protection Agency for the 2011 spill, which could involve additional penalties. An EPA spokesman said the agency does not comment on “enforcement matters.”

“If this is supposed to be punitive, or hold them to account — $12 million is nothing to them — I don’t see how this does that,” Bonogofsky said.

A trio of agencies will make the final decision on how the restoration funds are eventually spent. The trustees include representatives of the Bureau of Land Management, state of Montana and U.S. Fish and Wildlife Service.

Representatives of the agencies and state will rank plans based on their cost effectiveness. Other criteria will include how probable a project is likely to succeed and whether that success can be monitored and measured. Another key factor is that the project be within the affected area of the spill.

Public comments on the restoration work will continue to be taken through Oct. 31.

Is the Earth’s inner core solid and squishy?

How will $12M be spent on Yellowstone River restoration projects?

Buying land along the Yellowstone River, removing riprap or building a boat ramp at Billings’ Riverfront Park are just a few of the ideas bein…

Exxon Mobil Corp. will pay $12 million under a settlement to cover natural resource damages from the 2011 oil spill beneath the Yellowstone Ri…

Enough diesel fuel to create a sheen on the Yellowstone River spilled from a dredging barge that crews were working on Sunday, according to st…

Alexis Bonogofsky greets her horse Sacha on her riverfront property in Billings that was damaged by the 2011 ExxonMobil oil spill.