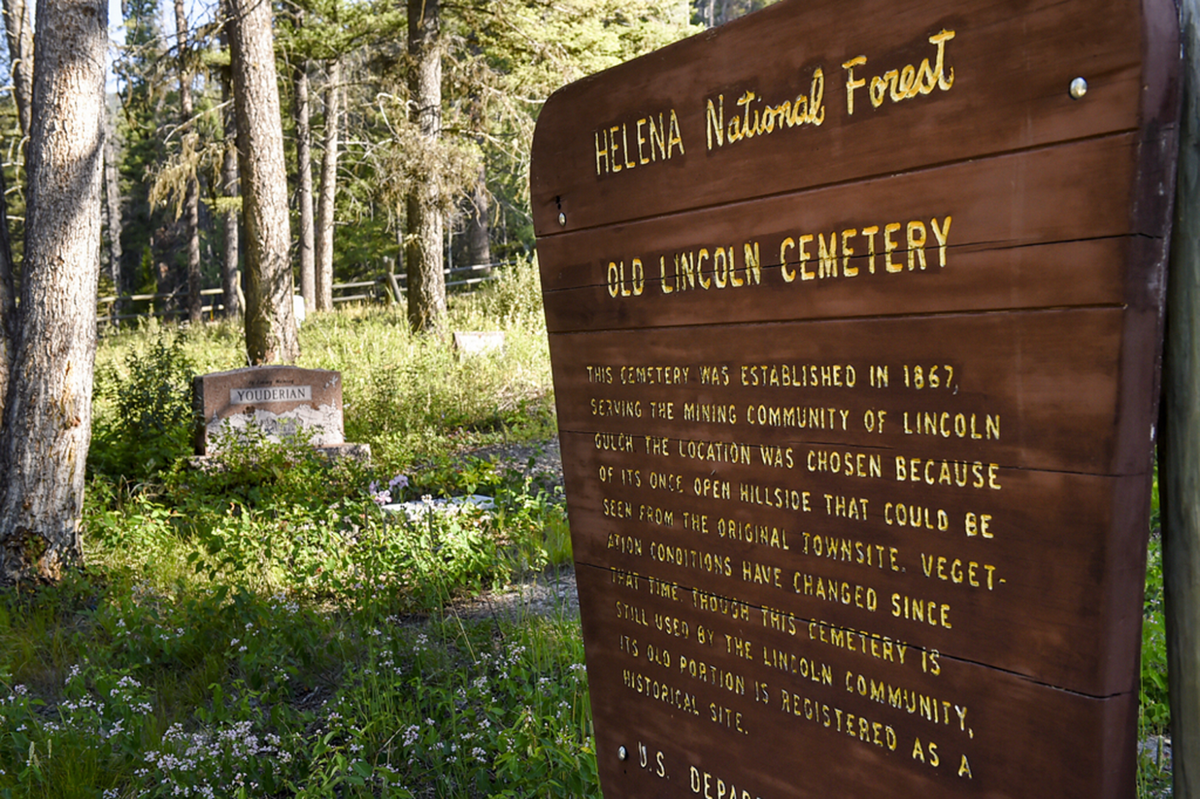 Established in 1867, the Old Lincoln Cemetery passed from the control of the Forest Service to that of Lewis and Clark County on July 14 after five years of discussion. 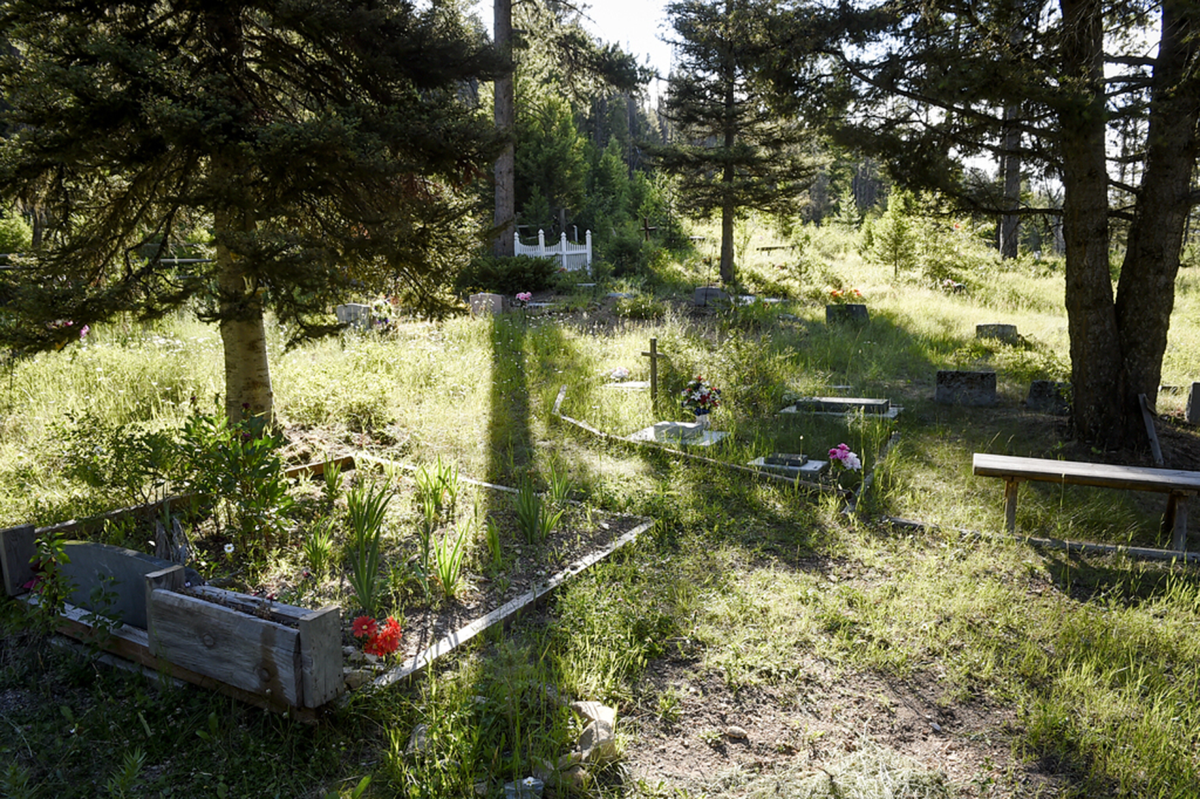 Beneath the lodgepole and ponderosa pines, the Douglas firs, native grasses, and huckleberry and tobacco brush at Lincoln's cemetery are some 200 graves that include 30 to 40 pioneer graves on 1½ acres. 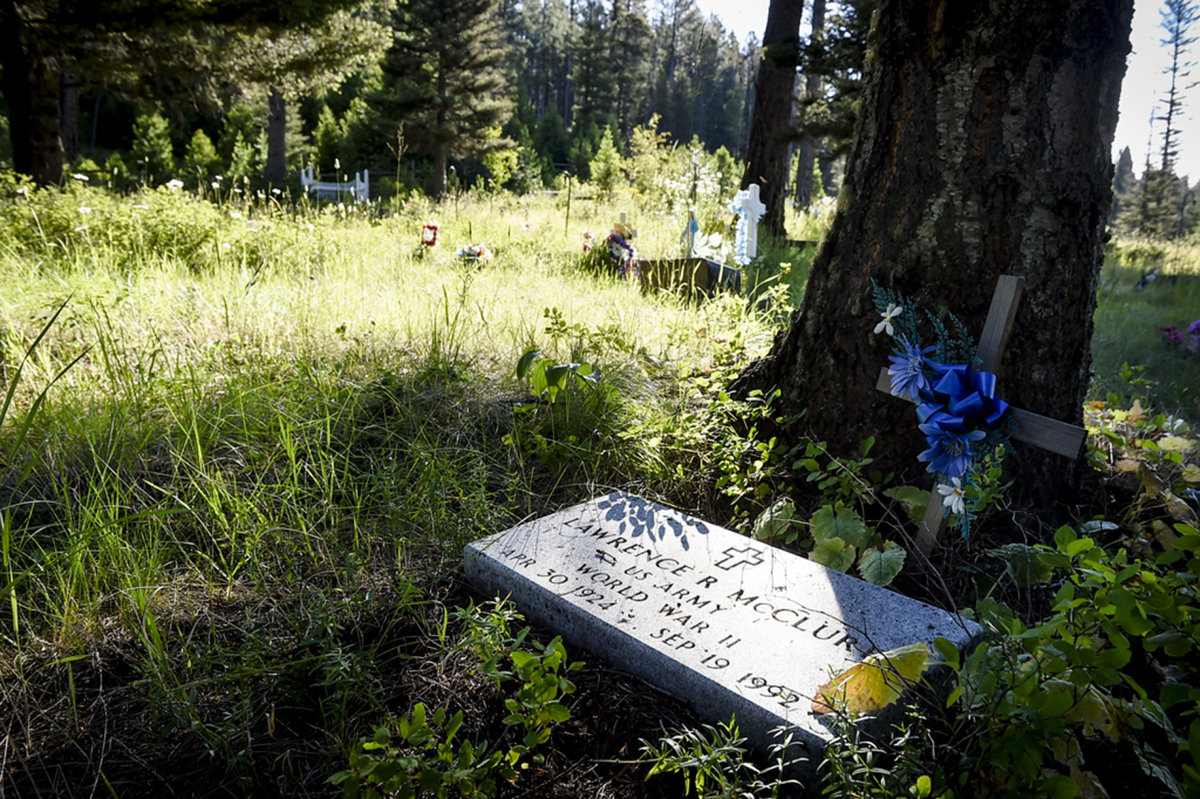 Some graves are unmarked while the stones at others may contain perhaps only a name. More recent graves of men and women who wore the uniform of military service are also found within the old cemetery.

Established in 1867, the Old Lincoln Cemetery passed from the control of the Forest Service to that of Lewis and Clark County on July 14 after five years of discussion.

Beneath the lodgepole and ponderosa pines, the Douglas firs, native grasses, and huckleberry and tobacco brush at Lincoln's cemetery are some 200 graves that include 30 to 40 pioneer graves on 1½ acres.

Some graves are unmarked while the stones at others may contain perhaps only a name. More recent graves of men and women who wore the uniform of military service are also found within the old cemetery.

There is no first name or initial on Hogan’s stone marker in Lincoln’s old cemetery, but he might well have known J. Egelson, as both died in 1869.

Beneath the lodgepole and ponderosa pines, the Douglas firs, native grasses, and huckleberry and tobacco brush are some 200 graves that include 30 to 40 pioneer graves on 1½ acres, according to a survey by the State Historic Preservation Office.

Aging wooden picket fences, weathered to a somber gray, surround some of the graves. Black iron or ordinary metal fencing adorns others graves in this cemetery that was established in 1867.

Some graves are unmarked, while the stones at others may contain perhaps only a name. More recent graves of men and women who wore the uniform of military service are also found within the old cemetery.

The cemetery was within view of Lincoln’s historic townsite before the forest reclaimed the community that was born through the promise of gold and perished when the wealth played out.

Over time, the historic portion of the cemetery and its more modern section became a part of national forest lands.

The town’s Lions Club managed the cemetery for a time, said Jerry Burns a former Forest Service lawman who is a lifelong Lincoln resident.

Lincoln’s Veteran of Foreign Wars post managed the cemetery after the Lions Club through an arrangement with the Forest Service, he said.

However, the Forest Service learned in the mid-1970s that special-use permits wouldn’t allow for burials on forest lands.

Some burials occurred anyway at the town’s old cemetery, and discussions among the Forest Service and Lincoln residents and Lewis and Clark County officials sought a solution.

Talks between the county and Forest Service began in earnest about five years ago, said Eric Bryson, the county’s chief administrative officer.

On July 14, those discussions concluded with $3,600 (the appraised value) from the county to purchase 4.77 acres of cemetery land from the Forest Service. The plat for the site now calls it Lincoln Gulch Cemetery.

“We’re really pleased to be able to provide that to the Lincoln community,” said Bill Avey, Helena-Lewis and Clark National Forest supervisor.

The Forest Service lacked legal authority to allow new burials in the cemetery, Avey said, explaining this left the Forest Service in a difficult position because it couldn’t meet the community’s needs.

The Forest Service also lacked a simple way to transfer the cemetery out of the forest, he added.

Often, authorization to transfer a cemetery from forest lands ends up as a matter for congressional approval, Avey said.

This process didn’t involve all of Congress but it did become an issue for Sen. Jon Tester, D-Mont., said county commission Chairman Mike Murray.

“Without the assistance of Sen. Tester, I don’t think it would have happened,” Murray said.

“I know the senator got somebody’s attention at the national level,” he added while also expressing his appreciation for the support received from national and local Forest Service officials.

The county commission plans to create a cemetery district and appoint trustees to manage it, Murray said, adding this will happen “as soon as possible.”

A five-person board would likely be created for the cemetery’s management, Bryson said.

After the board is in place, it would determine the costs for the cemetery’s annual operation and maintenance, he said, and added he expected the board would then consider seeking a levy or assessment to pay those costs.

People in Lincoln have encouraged the county commission to return control of the cemetery to their town, Murray said, noting that residents have waited long enough for the transfer to occur.

Bonnie Shown is among Lincoln residents who are pleased to have the cemetery under local control.

She moved to Lincoln in 1974 with her daughter to be closer to her parents who eventually retired there after building a cabin outside of town in 1951.

For perhaps 40 years or longer she and others in town have cared for the old cemetery, Shown said.

After the local VFW post closed and its membership merged with the East Helena post, a group of Lincoln residents that may number 20 gather at the cemetery on the Saturday before Memorial Day for the annual cleanup.

Many of her friends are buried there, said Shown, who inherited the cemetery’s books about 10 years ago.

“It brings back a lot of good memories.”

American Legion Post 9 places American flags at veterans’ graves for Memorial Day and Veterans Day, Shown said, adding, “They do a good job for us. It keeps our cemetery looking sharp.”

The community intends to preserve the historical character of the old cemetery, said Shown and Bryson.

The townsite and cemetery qualify for listing on the National Register of Historical Places, and community residents want to preserve the cemetery’s historic nature, Shown said.

Work is ongoing to prepare the paperwork needed to seek a National Register listing for the townsite and cemetery, said Burns who initially wanted the cemetery to remain under Forest Service control until it could be listed.

Even still, he’s said he’s pleased the cemetery is under the county’s control, as this will allow for its use by town residents.

“It’s been a long time in the making,” Burns said.

Shown too has waited for a resolution to the cemetery’s status. She too has a plot at the cemetery, next to that of her parents, where her ashes will be interred.

Shown worked part-time jobs as a bartender and bookkeeper among others after she moved there. Building a house there in 1981 made the town her home.

Being a resident of Lincoln has allowed her to volunteer over the years to assist various groups such as the rodeo club, snowmobile club, VFW and the community hall that will mark its 100th year in 2018.

For her, the attraction of this town set amid the forest and far from urban areas is its way of life.

“I find that I love the quietness of Lincoln,” she said.