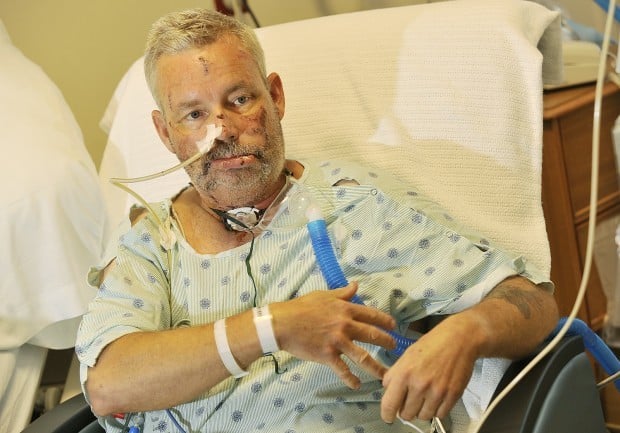 Jerry Ruth of Clark, Wyo., used hand gestures Friday, July 24, 2009 to describe how a Grizzly bear attacked him near his home. Ruth surprised the bear and her three cubs when she attacked. The bear first bit Ruth in the face, breaking his jaw in several places. Ruth, a retired police officer, grabbed a pistol he was carrying, fired three shots and killed the bear. Ruth sustained bite wounds, a punctured lung and other injuries in the attack. Ruth 51, had to described his ordeal on paper because he could not talk. 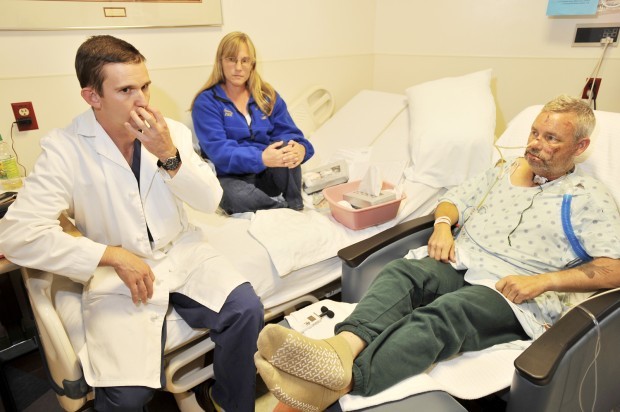 Jerry Ruth saw the grizzly for just a fraction of a second before it was on him.

Within seconds, the 275-pound animal had crushed the Wyoming man's jaw when it bit him in the face, fractured his rib and punctured his lung and left deep bite wounds in his calf and scratches across his back.

After the attack, the bear left him for her three cubs that Ruth saw for the first time as he lay bleeding on the dirt. When it reached the cubs about 15 yards away, the bear turned toward him again, "squaring off" as if to charge, Ruth recalled Friday.

Ruth grabbed for the .41-caliber magnum revolver he was carrying in a hip holster and relied on his training and experience as a police officer to save his life. He fired three times, saving three bullets in case his first shots failed.

But the bear dropped and didn't move, ending the furious encounter as swiftly as it started.

Ruth, 51, remains at St. Vincent Healthcare in Billings since the attack Sunday near his home in Clark, Wyo., a small town north of Cody near the Montana state line. Because his jaw is wired shut to heal the multiple fractures, Ruth used a pencil and notebook on Friday to describe his encounter with the bear. His wife, Cindy, has stayed near him as doctors continue to treat him.

One of his treating physicians, Dr. Jeff Rentz, said Ruth's injuries were very serious. The bear bite crushed his jaw on the left side in several places and broke the right side of the bone. The jaw has been wired shut and plates fastened to the bone to hold it while it heals, he said.

Rentz said it appears that the bear hit Ruth in the back, causing the fractured rib and punctured lung. Two of the bite marks in Ruth's calf were large enough to insert a thumb, Rentz said.

"We were concerned about his survival when he got here," the doctor said.

Ruth will require at least one more surgery, and his doctors said it was still unclear when he might be able to return home. Dr. Andy Boyce, an oral surgeon who worked on Ruth, said the jaw will have to remain wired for about six more weeks.

Cindy and Jerry Ruth moved to Wyoming last year after Ruth retired from the Baltimore County Police Department in Maryland after a 28-year career as an officer. They bought property in Clark about a decade ago after falling in love with the area while on vacation, Cindy Ruth said. Her husband spent a month every summer working on their retirement home, she said.

On Sunday, Jerry Ruth and a friend took their four-wheelers for a ride onto an adjacent ranch to look for a herd of elk that Cindy had seen the day before. The two men were hoping to catch a glimpse of the elk, and maybe find a few antler sheds.

They were about a mile from Ruth's house when the men parked the four-wheelers and began walking into a small valley toward a pond through sage brush. Ruth's friend was ahead of him, Ruth said, and the men were 25 to 75 yards apart. Some of the sage brush was as tall as a man.

Ruth said he caught only a glimpse of the bear before the attack.

"Like a flash the bear came out from under some sage brush and she was on me," Ruth wrote. "Grabbed my lower face in her jaw and I could hear the bones breaking."

Ruth said thoughts of his family came to his mind as the bear attacked. The couple has three adult children.

"I next became aware that she was off of me," Ruth wrote. "I was on the ground. She was squaring off to take another charge. It was at this time that (I saw) she had three cubs."

After the initial attack, Ruth said, he was able to grab his pistol and fire three times at the bear, and the bear dropped dead. Ruth began calling for help, and his friend arrived within moments.

The men called Ruth's wife on a cell phone so she could call 911 and meet them with a vehicle. They were only about a mile and a half from the Ruth's house, and they began making their way back on the four-wheelers as Ruth held on to his friend.

Cindy Ruth said was shocked at her husband's injuries.

"I just started praying," she said. "I didn't know how he was going to survive it. It was the scariest thing I've ever seen."

Ruth said he carries his revolver with him anytime he goes into the backcountry around his house. The habit probably saved her husband's life, Cindy Ruth said. In such a sudden attack, she said, bear spray probably would not have been effective against the mother bear.

"I think the only way we are not at a funeral right now is because he had his gun," she said.

Ruth said he regrets having to shoot the bear, and suggests that people be aware of all wildlife when they venture out.

"I feel bad for killing the bear," he wrote. "I think it was just a matter of time (before) this bear would have gone after someone else."

Three orphaned grizzly bear cubs were loaded into a trailer at ZooMontana in Billings Friday morning for a two-day trip to Tennessee.

CHEYENNE, Wyo. — The grizzly took Jerry Ruth by surprise, bursting from thick brush and biting his jaw almost completely off.

Jerry Ruth of Clark, Wyo., used hand gestures Friday, July 24, 2009 to describe how a Grizzly bear attacked him near his home. Ruth surprised the bear and her three cubs when she attacked. The bear first bit Ruth in the face, breaking his jaw in several places. Ruth, a retired police officer, grabbed a pistol he was carrying, fired three shots and killed the bear. Ruth sustained bite wounds, a punctured lung and other injuries in the attack. Ruth 51, had to described his ordeal on paper because he could not talk.