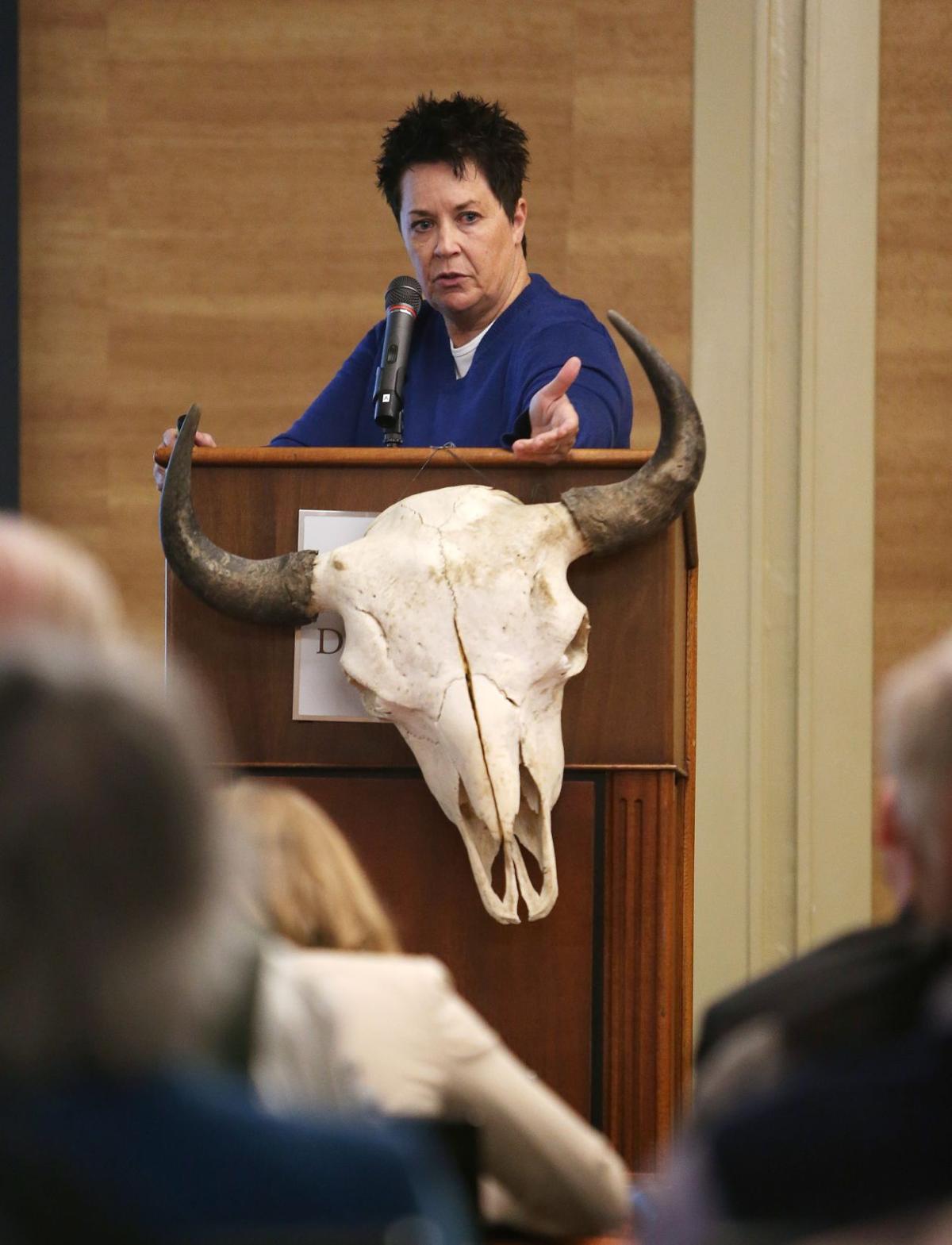 Tammy Agard of EEtility in Arkansas speaks during a session on clean energy accessibility during the annual meeting of the Northern Plains Resource Council at the DoubleTree by Hilton on Saturday. 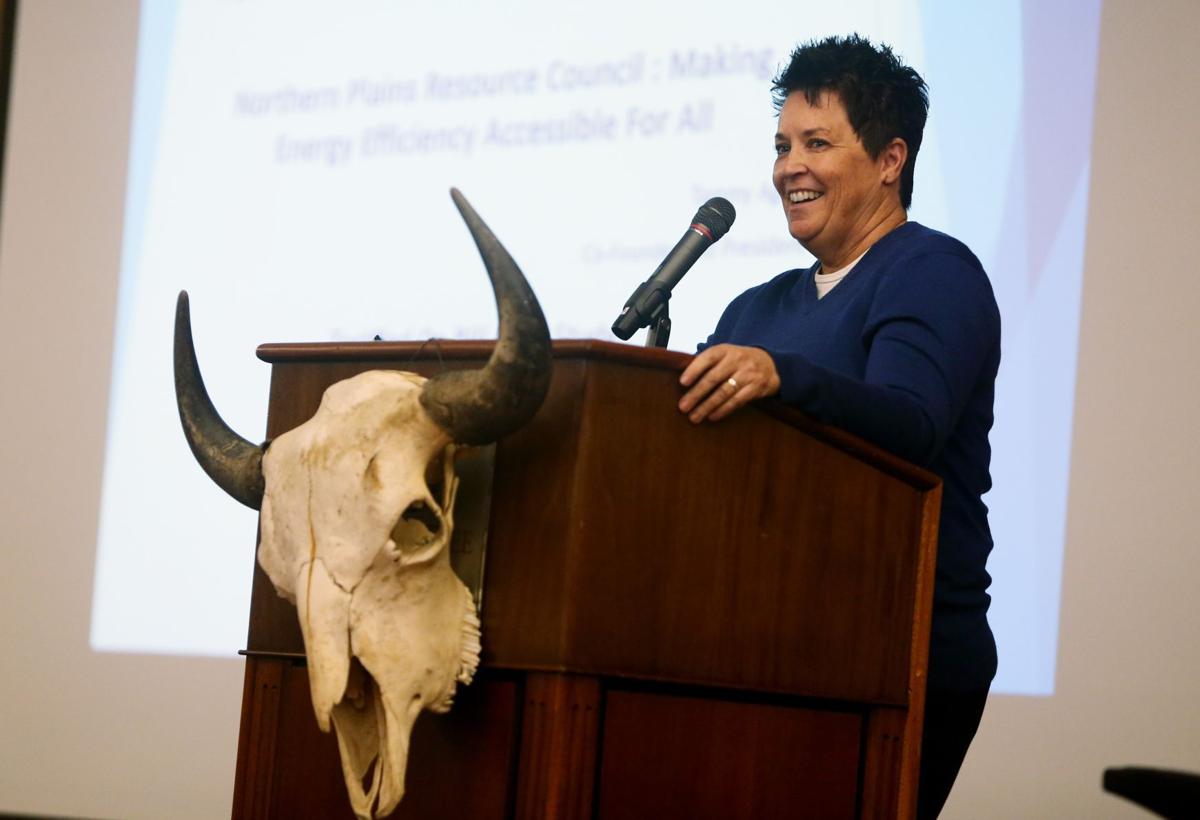 Tammy Agard of EEtility in Arkansas speaks during a session on clean energy accessibility during the annual meeting of the Northern Plains Resource Council at the DoubletTree by Hilton on Saturday.

Low-to-moderate income renters and homeowners in rural Arkansas are reaping the savings from a program they pay for themselves over time to improve energy efficiency in their house or apartment.

Tammy Agard, president and co-founder of EEtility in Arkansas, told nearly 190 people attending the 46th annual meeting of the Northern Plains Resource Council Saturday about a program in which an energy cooperative lends people money for energy efficiency or renewable energy improvements to their homes.

Residents pay nothing out-of-pocket for the improvements, but instead pay off the loan over time through their monthly utility bill.

One rule of thumb: The resident’s saving needs to be at least 20 percent more than the cost of the improvements.

The on-bill loan program is also known as tariff on-bill financing. What Agard appreciates about the program she manages is that “it helps low-income people achieve energy efficiency. The mentality used to be that energy efficiency is for wealthy people, and not for me. We are proud to be at the forefront.”

Here’s how one program works: Renters or homeowners have a contractor over to test the house for needed energy improvements, which are made by the contractor and then paid for by the local utility cooperative. A utility representative then inspects the house to make sure the work was done correctly.

“We’ve done this in the southern Arkansas delta without one penny of taxpayer money,” she said. “There is no catch. It really can be done, and it brings immediate relief to an awful lot of folks who have otherwise been left out of energy efficiency.”

In a question-and-answer session that followed her talk, Agard said that the way to get state public utilities commissions interested in on-bill loan programs “is to give them data — lots of data,” because the program is performance-based and not rebate based.

She said some people were concerned that the owner of an 85-unit apartment building that received the energy upgrades in Arkansas would dramatically increase rents on his tenants. Then they thought again.

“The cooperative knew the local pastor who owned the property,” she said with a smile. “They also knew where the pastor would go” if he dramatically increased his tenants' rents.

Another hurdle, she said, is that “there aren’t a lot of weatherization contractors in rural communities. We reach out to them, tell them there’s upcoming activity, and urge them to participate.”

Failing that, EEtility does on-the-job training so that area workers can learn weatherization skills.

For Agard, the best part of the program is that it doesn’t require legislative approval, since it’s “strictly a utility decision.”

A few residents, she noted, have turned down the program. Some were in the middle of a divorce. Others had a sick family member or planned to move soon. Others told her, “This is too good to be true.”

She said she hopes Montana will soon follow suit.

“I’m going to retire in Montana. I’m making that announcement today,” the former Hamilton resident joked. “We absolutely need to do the same thing, because I really need to move back here.”

A 20-year-old Billings man was killed in a single-car crash Friday night on Interstate 90 in Big Horn County.

The Billings Fire Department rescued a man who fell from the Rimrocks west of the Billings airport at 4 a.m. Sunday.

Tammy Agard of EEtility in Arkansas speaks during a session on clean energy accessibility during the annual meeting of the Northern Plains Resource Council at the DoubleTree by Hilton on Saturday.

Tammy Agard of EEtility in Arkansas speaks during a session on clean energy accessibility during the annual meeting of the Northern Plains Resource Council at the DoubletTree by Hilton on Saturday.