An old map showing the possible location of Sacrifice Cliff. 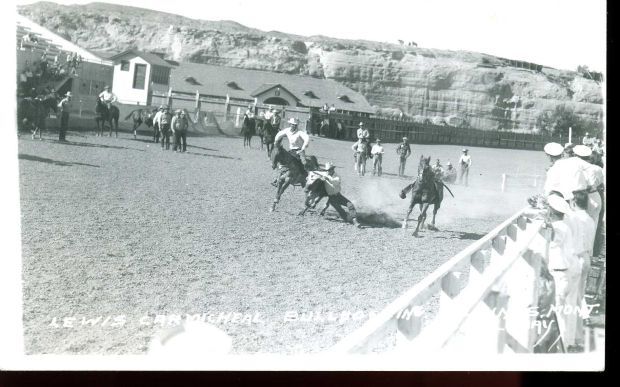 The possible location of Sacrifice Cliff as seen from the fairgrounds. 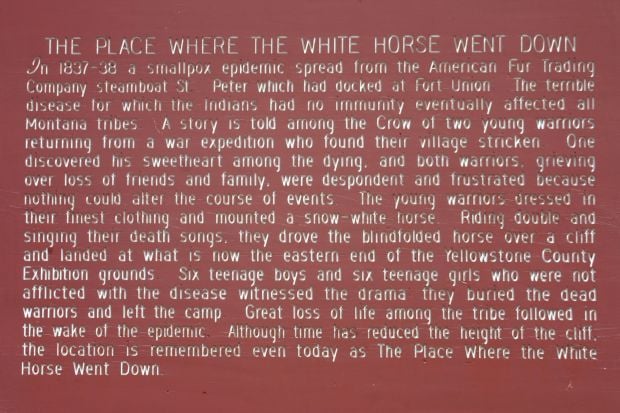 This undated explains the possible history of Sacrifice Cliff.

A possible location of Sacrifice Cliff and Alkali Creek as seen from the Midland Empire Fairgrounds.

Ask almost any Billings resident to point out Sacrifice Cliff, and you’ll be directed to a prominent sandstone outcrop on the south bank of the Yellowstone River, where the river narrows and curves around the base of the cliff as it flows past the city.

The area is part of the Bureau of Land Management’s Four Dances Natural Area, a 765-acre parcel of undeveloped grasslands, rocky outcrops and riparian habitat the agency acquired in 1999 as undeveloped recreational area. The rocky cliffs plunge 200 to 500 feet to the river, while the plateau offers views of the entire valley.

According to legend, Sacrifice Cliff is so named because two Crow warriors rode horses over the cliff to their deaths after finding a tribal encampment nearly wiped out by smallpox.

Looking at the massive cliff, it’s not hard to imagine such a thing happening.

The story, or versions of it, may be true, but a collection of evidence suggests the event happened a little farther downstream on the other side of the river and involved more modest cliffs that now are part of the MetraPark fairgrounds.

Kevin Kooistra, community historian at the Western Heritage Center, said the center and the BLM’s Billings Curation Center developed educational games or kits, called History Mysteries, several years ago in which students and the public can review and analyze a variety of evidence to come up with their own conclusions about local history.

The first kit was about Sacrifice Cliff and included about 150 pieces of evidence, from photos to archaeology reports to Crow Indian oral histories, and maps and tourism brochures, he said.

“We let the kids read the materials and come up with what they think happened at Sacrifice Cliff, where it is and the general time period. We presented all the body of evidence,” Kooistra said.

“I can give their consensus,” he said.

Their consensus, Kooistra said, is this:

The story relates to a probable smallpox epidemic occurring maybe as late as the 1850s. The story also probably involved the sandstone cliffs that were behind MetraPark, at the east end of Billings and on the north side of the river.

Two young Indian men who had been out scouting for a long time returned to their village located in the back area of MetraPark, where Alkali Creek used to flow at the base of the cliffs. Upon their return, the men found their village decimated by smallpox. One scout learned that his wife or significant other had died. Family members had died, too.

The two men were so distraught that they climbed on a white horse and committed suicide by riding the horse over the cliff.

The consensus version of students playing the history game tends to line up with Crow oral histories, he said.

Tourism brochures from the 1930s to the 1960s, he said, identify Sacrifice Cliff as being the cliffs behind the horse track at MetraPark.

“All of a sudden in the 1970s, it leaps over the river. I’m not sure why that happened. All of a sudden, it just leaped. And there is Sacrifice Cliff as we know it today,” he said.

Kooistra said he’s heard that someone in the Chamber of Commerce decided “it was sexier” to have the cliff on the other side of the river. “It’s quite a leap from there,” he said.

Whereas looking at the cliffs behind the fairgrounds, one “could survive that leap,” he said.

Looking at the bigger picture, Kooistra said there are Crow stories and early Billings historical events that identify burial grounds along the eastern end of the north Rims, by what is today Black Otter Trail and the location of Applebee’s Restaurant.

And on the face of the Rimrocks near Sixth Avenue North is rock art depicting a round face and crying eyes. “It may be associated with the whole story” of Sacrifice Cliff, he said.

There also are parts of the Sacrifice Cliff story that don’t necessarily add up.

The death of the two men as a sacrifice, penance or offering may be a misnomer and a “western” interpretation, Kooistra said.

“They did it because it was that bad. The moment was so horrific,” he said, when the men saw what had happened.

What is the basis for the suicide version? Kooistra said one story is that six girls and six boys survived the smallpox. “They’re the ones who account for the suicides,” he said.

Those surviving 12 children traveled north into the Musselshell River country, where they found a clan of Crow Indians, he said. The children waited a couple miles away until it was clear they were not affected by smallpox and eventually joined the group.

Another version comes from Mardell Plainfeather, a Crow historian, in an email to Kooistra on March 14, 2006.

Plainfeather told Kooistra that her mother told her that two warriors returned home either from horse capturing or warfare.

“To hear my mother tell it, these two were great warriors and hunters, they were fearless and protective. Mother would go on to say, ‘They were great men, not cowards. But that day they no longer wanted to live. They made a choice to die.’”

The Crow, Plainfeather continued, were camped on the Yellowstone and while the two warriors were gone, the entire village was stricken by smallpox.

“On their return, they saw the devastation and all their village dead. There was one old man who was still barely alive. He warned them not to come any closer, that everyone was dead. Both men grieved so much, they told one another, ‘Let us join our relatives on the other side (what some people know as the afterlife). We will blindfold our horses and jump from the cliffs above the Elk River.’ Neither one of them wished to live because in that village was the one warrior’s wife and the other had a sweetheart who were among the dead,” Plainfeather told Kooistra.

“Nothing ever lines up perfectly," Kooistra said. "History is more about storytelling.”

US to fly in baby formula on military contracted jets

An old map showing the possible location of Sacrifice Cliff.

The possible location of Sacrifice Cliff as seen from the fairgrounds.

This undated explains the possible history of Sacrifice Cliff.

A possible location of Sacrifice Cliff and Alkali Creek as seen from the Midland Empire Fairgrounds.