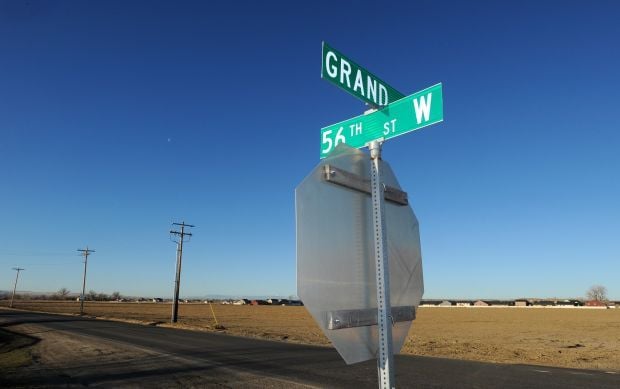 A field at Grand Avenue and 56th Street West is the site of a new middle school. 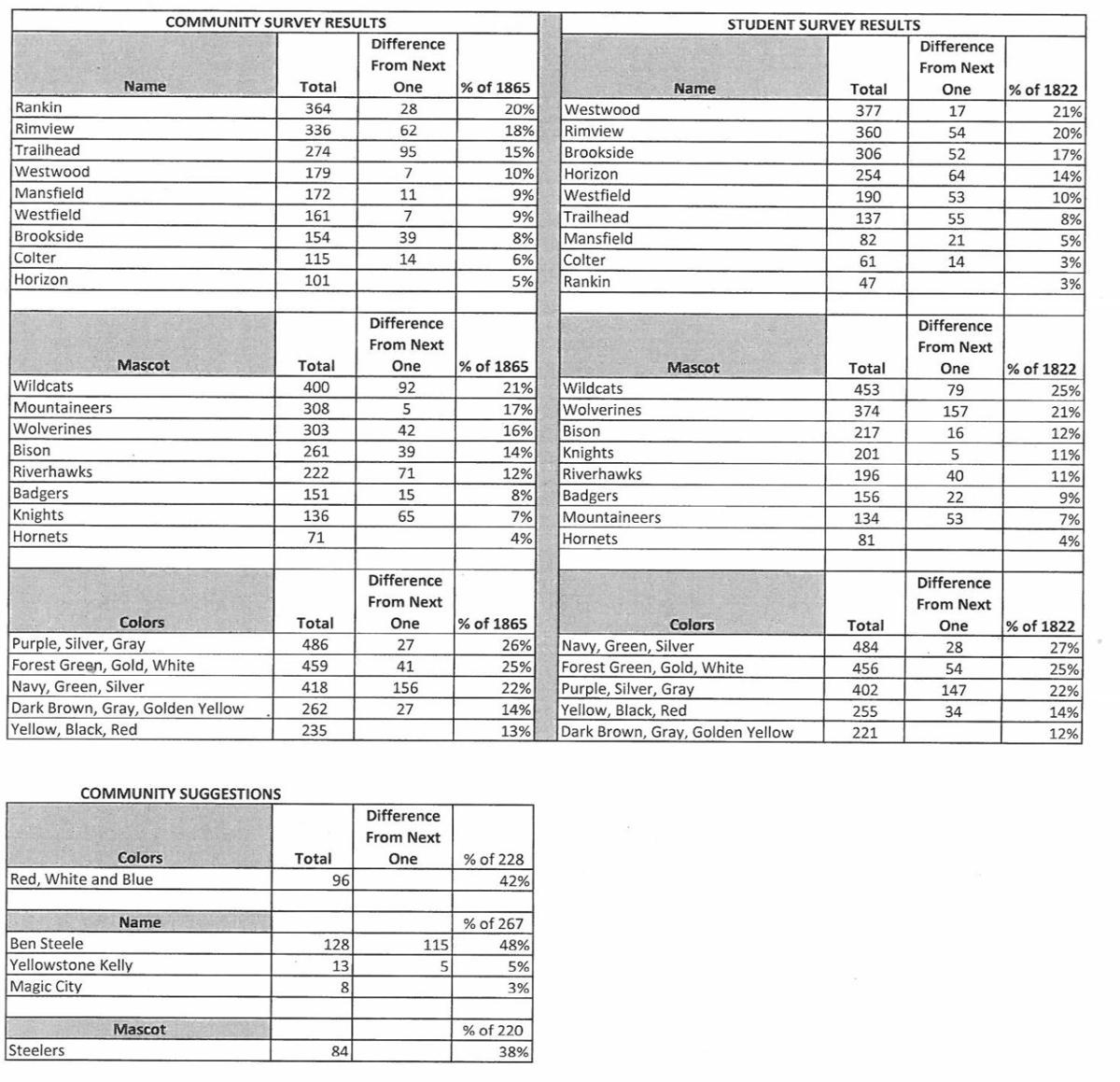 Results from community and student surveys commissioned by a School District 2 committee that compiled a list of name, mascot and color suggestions for the future West End middle school. 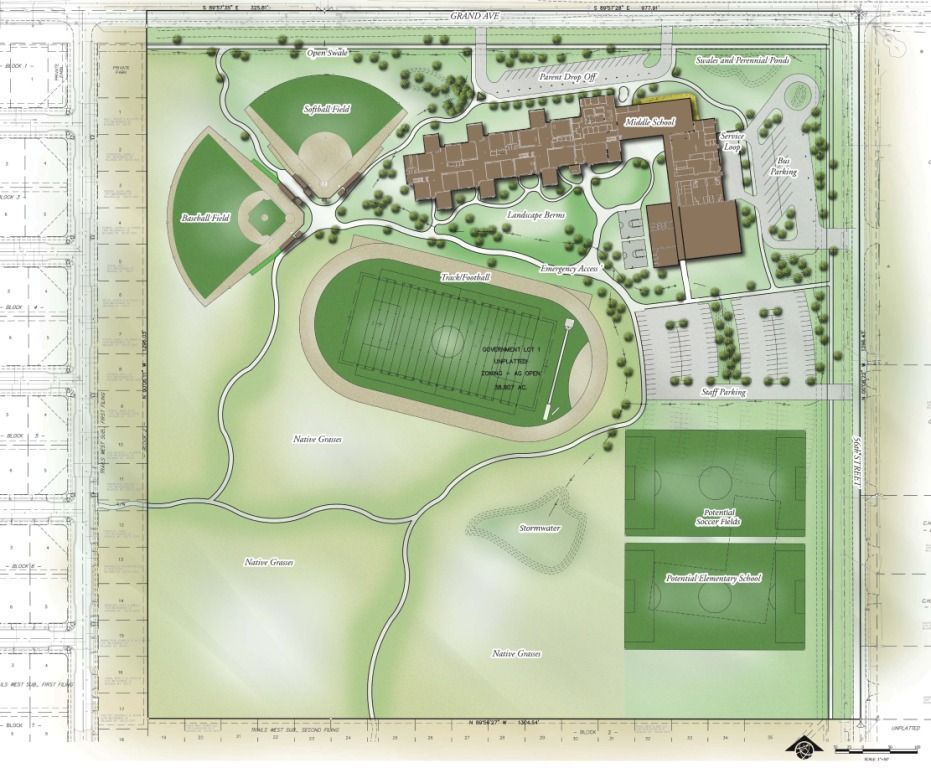 The latest site plan for the west end middle school, as presented to School District 2 trustees in May.

The West End middle school got its stripes, a mascot and a builder Tuesday, but a name is still two weeks away.

Members of the School District 2 Board of Trustees narrowed the options to two — Rimview and Jeannette Rankin — but decided to put off a final decision so more public input can be gathered, a move they hope will avert the backlash that has plagued the district's efforts to name its new middle schools.

Trustees tabled the naming decision after an hour of discussion, then swiftly agreed upon the school's mascot and colors. Students will be known as Wildcats, and the school's banners and sports uniforms will be forest green, gold and white.

As with the school's Heights counterpart, its name has drawn strong opinions on social media and in op-eds. A group of 10 volunteers on a naming committee were closely split recently over using historical figures or local heroes as the building's namesake, electing instead to forward a list of less divisive, geographic options to the board.

Trustees, though, were drawn to Jeannette Rankin, the first woman elected to U.S. Congress who holds the distinction of being the only representative to vote against involvement in both World Wars. Her named garnered the most votes on a community survey last month, but it was last among student preferences.

"I don't think we step back from the potential of controversy just because it's a (person's) name," trustee Janna Hafer said. "I think we at least consider it."

Earlier this year, the board chose to name the Heights middle school after Crow scholar and war hero Joseph Medicine Crow, despite the name's poor showing on public surveys. The decision to disregard the surveys and the recommendation of a volunteer committee drew criticism on social media and prompted a Heights group to formalize its grievances in a letter to the board.

Trustees on Tuesday spoke with admiration about Rankin's famous vote against WWII, addressing concerns that it might rouse anger among those who might consider it unpatriotic. The vote against declaring war on Japan in the wake of the attacks on Pearl Harbor drew harsh criticism from her political peers and effectively ended her political career.

Trustee Joe Raffiani noted the reasoning Rankin offered after casting her "nay" vote. As a woman, she couldn't go to war, so Rankin said she would refuse to send anybody else.

Hafer interpreted the vote as symbolic.

"There was one vote representing what everybody already knew: that war is hell," she said.

Board chair Greta Besch Moen said naming a school after Rankin "would be a strong message to send to our state as well as our community."

Raffiani said selecting a generic, or geographic, name would be "an opportunity lost."

Rimview Middle School, trustee Susie Layton said, would be "more accepted by the community." It was the top vote-getter among students.

Only one resident delivered public comment during Tuesday's regular board meeting, a man who urged trustees to name the school in honor of Billings resident, former educator, artist and World War II prisoner-of-war Ben Steele. Trustees spoke highly of Steele, who had received more than 100 write-in votes, but the suggestion didn't gain traction.

The board choose one "geographic" name and one "anthropomorphic" name from the list to consider, but trustees were reluctant to make a final decision regarding a name that wasn't included on the list presented by the volunteer committee. Instead, they agreed to give residents another chance to weigh in.

Input will come in the form of a third online survey, this one with just two options to consider, trustees said. The board will take those results and any other public comment under advisement when it reconsiders the issue at an already-scheduled June 29th special board meeting. That meeting takes place at noon.

"This is a community decision," Trustee Kevin Toohill said. "It rests in our hands to make the decision. We're asking for feedback from the community."

Statues of Jeannette Rankin grace the Montana Capitol in Helena and the U.S. Capitol in Washington, D.C. She is one of the most important peop…

Jeannette Rankin is a popular woman this week.

A field at Grand Avenue and 56th Street West is the site of a new middle school.

Results from community and student surveys commissioned by a School District 2 committee that compiled a list of name, mascot and color suggestions for the future West End middle school.

The latest site plan for the west end middle school, as presented to School District 2 trustees in May.