YELLOWSTONE NATIONAL PARK — On a wintry road clogged with snowmobilers, dozens stopped to take in the staggering scene that lay before them. The water of the Madison River flowed dark and glossy under overcast skies. Reflected on the surface were the snow-caked bison congregated on the water’s edge and the towering mountain behind them.

Onlookers raised cameras to memorialize the uniquely monochromatic sight in a wild place unlike any other in the world. The view is only one of the reasons hundreds of people travel to Yellowstone National Park every winter, even when hardly any snow falls.

Winter in the park today is wholly different than it was 50 years ago, and it will keep changing in the decades to come as temperatures rise and precipitation that once fell as snow now falls as rain.

Even now, the buzz from the snowmobile guide is that this year is a low-snow year. As an afterthought he added that the last few years have been rough.

“This is about 50% of the snow we need,” said Justin Parsons, gesturing to the snow accumulation around Madison Junction, where about 20 snowmobiles were parked.

The morning started with downy flakes falling from the sky, but by afternoon a watery patch of pavement peeked through the snow.

The asphalt against white backdrop provided a unique snapshot of a warming climate that isn’t so easily visible in urban areas. It is a glimpse into a future of changes that will be driven by warming temperatures.

While navigating the bare blacktop, 10 snowmobilers kept a tentative eye on the bison ahead who were enjoying the easy passage down a wintry road in Yellowstone.

Cows tossed their horned heads as engines rumbled by. A calf trotted a few menacing steps toward the travelers before deciding to stay safely behind the mothers as the machines accelerated, reaching, and sometimes surpassing, the 35 mph speed limit.

A string of sunny days, all too warm for the traditional wintertide, proceeded the guided tour, which started in the gateway community of West Yellowstone and powered through to the Grand Canyon of the Yellowstone River on Feb. 21, 2022.

Clyde Seely, 83, is something of an institution in West Yellowstone, being the first to offer snowmobile packages to tourists in the 1970s. Since then, snowmobiling has exploded in the West with some describing the gateway town as the snowmobile capital of the world. Today, oversnow tourism is a critical part of the local economy.

Seely has seen it all, from fires that reduced his hotel to cinders on two separate occasions, and then the 1988 fires in Yellowstone that threatened the future of tourism. He's had a front row seat to the changing snowmobiling regulations and has seen years with feet upon feet of snow and years with hardly any.

He pointed to an old photograph hanging on the wall in the lobby of Three Bears Lodge. His daughter sat smiling in a toboggan that matched the snowmobile it was attached to. Behind her is what was then a two-story motel. The photo was taken before Seely bought the lodge in 1970. And most shocking of all was that the entire first level of the lodge was buried in snow.

The photo inspires a reaction of amazement and nostalgia for a snowy world that simply doesn’t exist in West Yellowstone anymore. It is the same reaction the next generation will have when dusting off old photos of their grandparents on vacation to the park for its 150th birthday.

By mid-century, 2031 to 2060, the entrance to the park from West Yellowstone will see the greatest declines in oversnow drivability, according to estimations from Ann Rodman, GIS specialist for Yellowstone National Park.

Out of a 90-day season, Rodman estimates there will be only 53 days in which the road will have the minimum 12 inches of snow needed to accommodate snowmobiles.

In the last 30 years and beyond, snow accumulations have followed a downward trend and the number of days with any sort of snow on the ground decreases with every passing decade. And it’s all driven by warming temperatures.

The average temperature over the last two decades in the Greater Yellowstone Area is likely higher than any other period in the last 20,000 years, and carbon dioxide in the atmosphere is the highest it’s been in 3.3 million years.

The results are a disappearing shoulder season. Fall conditions are pushing further into November and December, and spring is arriving earlier than ever, meaning the snowmobile season may start later and end earlier.

“In order to keep our snowmobiles going we got a bunch of town folks and pulled slant sleds behind Bombadiers. We would shovel snow onto these big sleds … and shovel the snow onto the highway,” Seely said.

With at least a million dollars worth of snowmobiles and complete reliance on a season regulated by the National Park Service, locals running tours in the park can’t afford to lose the shoulder season.

“In order to justify that kind of expenditure, every day counts. In order to maintain the payroll that we have with so many people depending on us to be able to provide their income, it’s really important that we have every day that we can,” Seely said, adding that there have been years when the season was cut short because of low snow.

“That is really hard because you can’t make that up,” he added.

In the years that Seely has spent in West Yellowstone, that warm February was very unusual. But by mid-century, Rodman expects Yellowstone will see similar conditions more frequently.

“Instead of that being an unusually bad year, that’s going to become the normal year,” she said. “What happens is those extremes will happen a lot more often and become more normal.”

To put the rate of change into perspective, Rodman talked about glaciers in Glacier National Park that have disappeared in the last 60 years.

“Things that have been around for 10,000 years are disappearing in a person’s lifetime,” she said.

Despite the inconsistent snow years, West Yellowstone — usually busting at the seams from May to October — markets the winter and shoulder seasons because there's capacity for growth.

Visitation in Yellowstone has had many banner years recently, especially since the pandemic ignited interest in recreating outdoors. Though the spring, summer and fall seasons carry the bulk of visitation, the winter season has seen a boost as well, with oversnow travel beginning Dec. 15 and, snow permitting, running until March 15.

Visitation numbers for the 2021 to 2022 season have yet to be aggregated, but anecdotally, West Yellowstone has continued to enjoy increasing winter visitation.

“This winter and last we have seen a noticeable increase in winter recreation and visitation,” said Katrina Wiese, president and CEO of West Yellowstone Chamber of Commerce.

Even with the first-ever cancellation of the Ski Festival that’s held annually over Thanksgiving, West Yellowstone was less impacted than expected, Wiese said.

Though there wasn’t enough snow for the festival, just enough snow covered the ground for college ski teams to descend upon the trails, partly because West Yellowstone had the only snow in the region.

When it comes to shortening winter season, it’s something Wiese says is always in the back of the minds of Chamber members, but there is no contingency plan in place for low or slow snow years that could impact the economic health of the community.

Xanterra, one of five concessionaires in the park, has made major investments in adapting to unpredictable snow levels.

“It used to be that we could bank on quality snow, but we can’t anymore” said Dylan Hoffman, director of sustainability for the company.

The company’s once tracked snow coaches now sport huge, fat rubber tires that can run smoothly both on snow and over pavement. And if push comes to shove, Xanterra will use its summer vehicles during the shoulder seasons.

But through the lens of a hospitality company, Hoffman considers the visitor experience in Yellowstone forever changed due to rising temperatures. It’s a conversation their guides extend to visitors.

When traveling to Yellowstone, the snow accumulation and snow pack is the common denominator of nearly every visit from skiing to snowmobiling to fishing. Even for those specifically seeking the wildlife, snow plays a major role.

From the seat of a snowmobile at least 100 yards off, everyone could spot the narrow snouts and greyish yellow coats of two coyotes flitting lightly across the snow. It’s mating season for wild dogs, explained the guide.

During any other season, the multicolored coats would act as camouflage in the brush, but against the snow their movements are clear even to the unaided eye.

Impacts of low snowpack and earlier melt also trickles down into other seasons. With snow melting earlier, streams and rivers throughout the summer are warming and water levels are lower, impacting fish populations.

Though levels of precipitation will remain relatively consistent, warming temperatures means there will be more rain instead of snow and moisture will evaporate more quickly, leaving ecosystems parched of water and susceptible to invasive species and frequent, hot wildfires.

“Climate change can be this nebulous concept of something that is happening elsewhere, but in Yellowstone we see the signs … Yellowstone is already being changed by climate change,” Hoffman said.

But he added that the signs are a good wake up call to those who visit from all over the world, and the extra attention on the park this year for its 150th birthday is a time for all to think critically about the world we live in.

“(This year), Yellowstone turns 150 years old. While that’s notable on a lot of levels, we can all use the extra coverage to remember that this place is available for the benefit and enjoyment of the people and for future generations. Take a pause to celebrate but (also) to remember that continuing this legacy is of critical importance,” Hoffman said.

Health reporter at the Billings Gazette

Yellowstone National Park will celebrate its 150th birthday on March 1.

Yellowstone's wolf reintroduction has been hailed as a success, but advocates worry for the wolves' future

The story of gray wolf recovery in Yellowstone is hailed as one of the world's greatest conservation success stories, but many fear that the population is once again threatened.

The Yellowstone Cougar Project is revealing details about the big cats' lives, and unusual deaths, by using GPS collars and remote cameras.

Cody museum celebrates Yellowstone's 150th through the eyes of individuals

The exhibit, “Yellowstone: For the Benefit and Enjoyment of the People,” opens at noon on May 19 in Cody, Wyoming, and will stay up through Jan. 29.

Unbelievable! This is the moment after a gunman opened fire in a crowd in Philadelphia 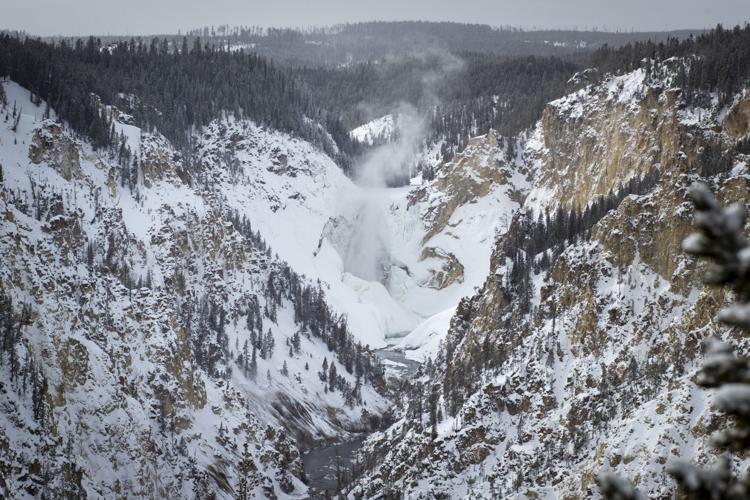 The Lower Falls are visible in the Grand Canyon of the Yellowstone from Artist Point in Yellowstone National Park on Feb. 21. 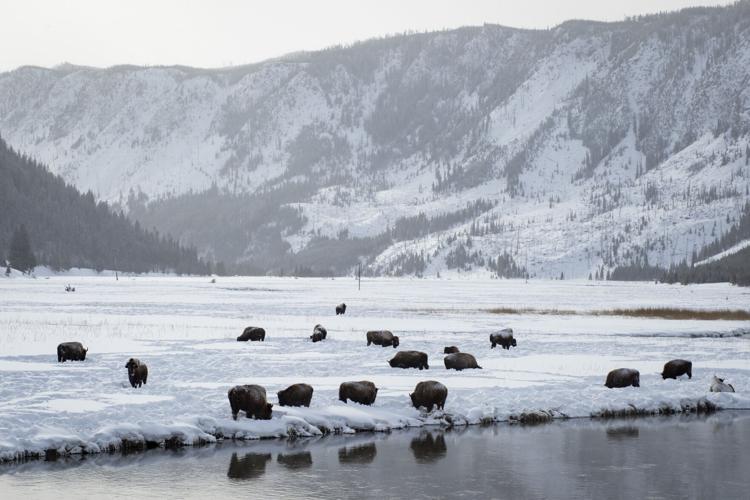 Bison graze in a snowy valley along the Madison River in Yellowstone National Park on Feb. 21. 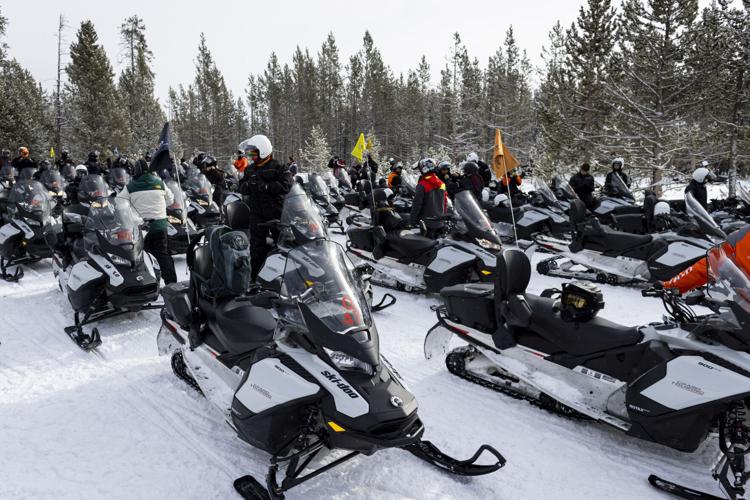 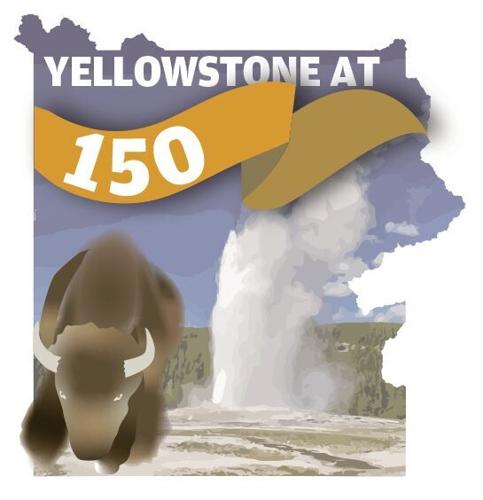 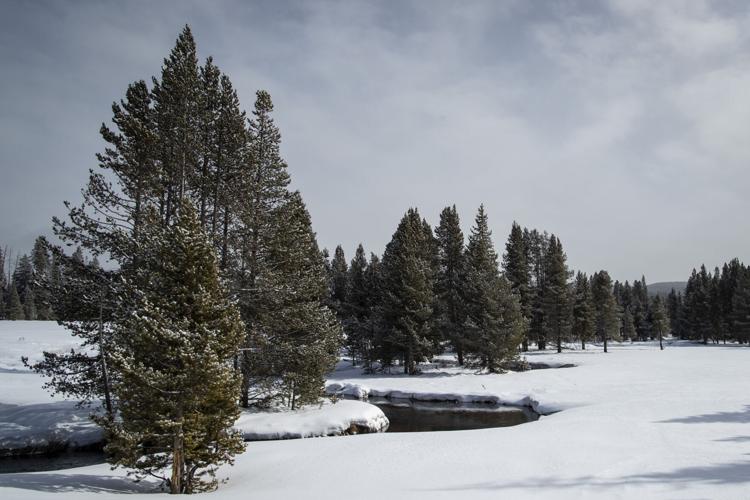 Snow covers the banks of a stream in Yellowstone National Park on Feb. 21, 2022. 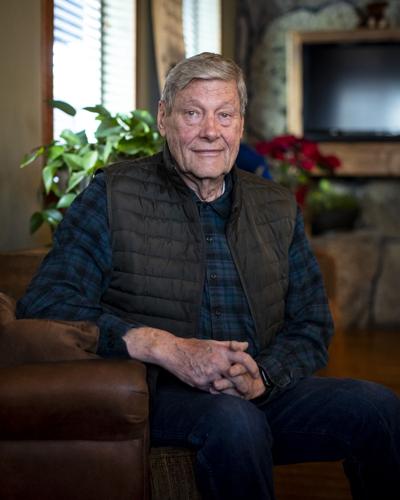 Clyde Seely, seen here at Three Bears Lodge in West Yellowstone recently, was the first outfitter to offer snowmobile packages to tourists in the 1970s. 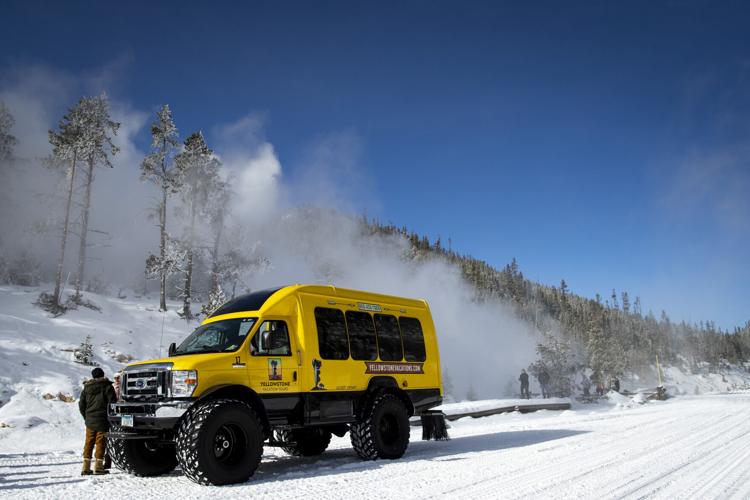 A snowcoach stops next to Beryl Spring in Yellowstone National Park on Feb. 21, 2022.