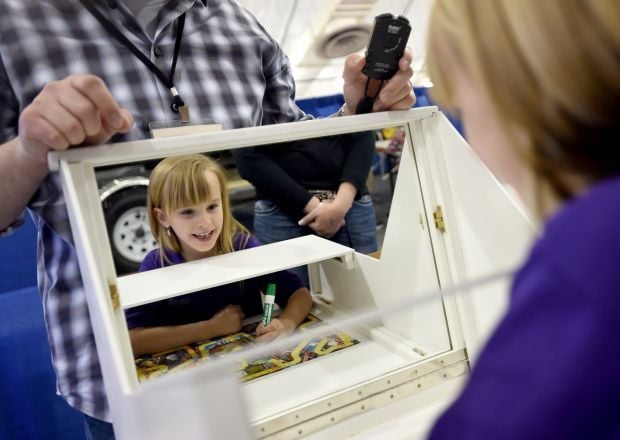 Madison Flowers, 6, works on a maze using only its mirror image at the New York Life Insurance booth Saturday at the Home & Health Expo at MetraPark. 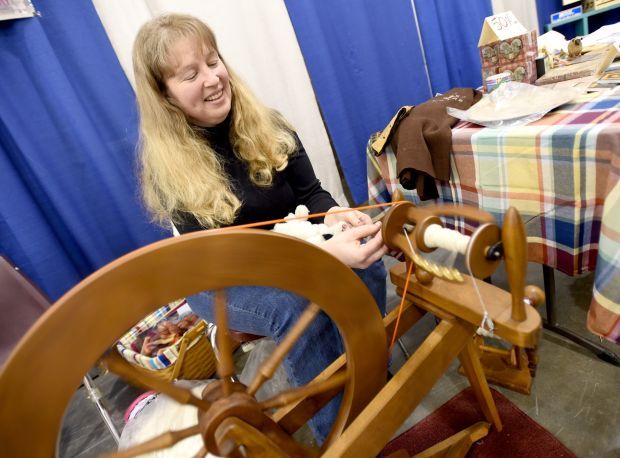 Tammy Jordan of Laurel spins yarn out of wool Saturday at the Home & Health Expo at MetraPark. 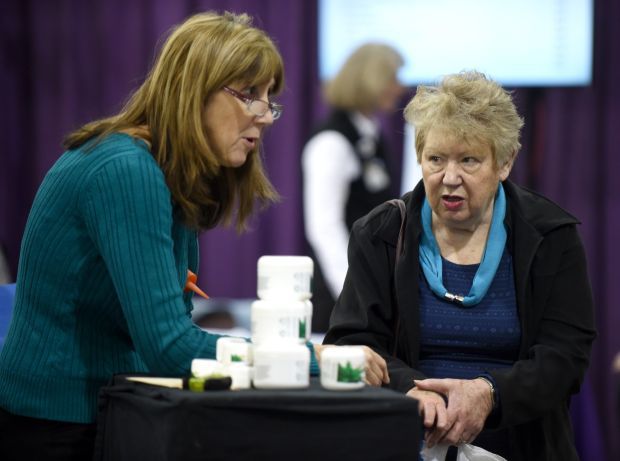 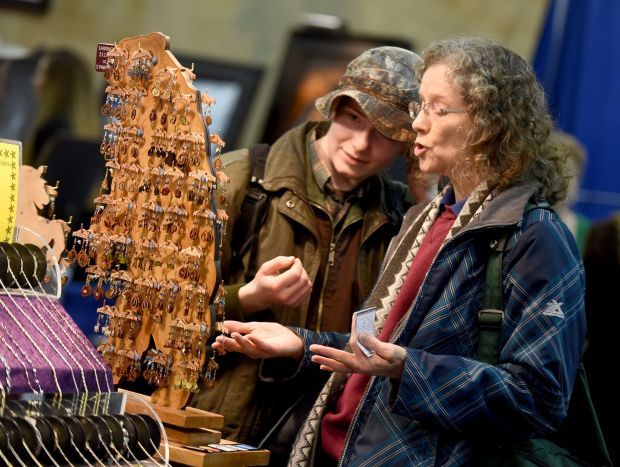 Briane Baeten, left, and her mother, Rita Baeten, check out earrings at the Gold By The Inch booth Saturday at the Home & Health Expo at MetraPark.

At probably the most interactive of the more than 100 booths at the Montana Agri-Trade Exposition Home and Health Expo on Saturday, people were handed a marker and a cartoon map and asked to trace a path from start to finish — by looking in a mirror.

Attendees finished the task in times ranging from 31 seconds to about 12 minutes. As a reporter took several wrong turns and generally made a mess of things, New York Life Insurance Co. financial services professional Kyle Schlichenmayer looked a little worried.

“Did you drive here today?” he asked, breaking into a grin.

The company was trying to send the message that it’s there with its customers every step of the way.

One of the fastest times, he said, was clocked by a dentist manning the booth next door. “He works with a mirror all day long,” Schlichenmayer noted.

Interest was high all three days, people displaying their wares and their services agreed as the show was wrapping up Saturday afternoon. Bev Zaugg, the wife of said dentist, Dr. Spencer Zaugg of Advanced Dental Professionals, said she helped give away thousands of small backpacks with toothpaste, toothbrushes and other helpful items. The dentists answered questions and explained options to prospective patients, she said.

Children were drawn to the booth by a laser displayed up high on a nearby wall.

Many booths featured exhibitors doing things as a way to draw people in. Tammy Jordan, of Laurel, a member of Prairie Handspinners, used a traditional foot-powered wheel to spin Targhee Merino wool into yarn.

In general, she said, women enjoy talking to her while she’s spinning, and children love to watch. Men just want to know one thing — how the Ashford traditional wheel works.

“You can almost see their wheels turning,” she said.

Leona Carter of Canby, Ore., a manager with Hawaiian Moon Aloe skin cream, spent a minute massaging people’s hands as she rubbed her product in.

“We have been very happy with how it’s gone,” she said.

Jenny Dow works for YoungLives, a program for teenage mothers. She was selling $20 raffle tickets for an all-terrain vehicle and trailer that will be given away this summer.

“I think that it’s great to help any children you can,” said Dawn Kleinsasser, of Joliet, who purchased a ticket and said she and her children and their friend “were having a blast.” She said the group had spent more than two hours at the MATE and the neighboring Home and Health Expo, held at the Montana Pavilion at MetraPark.

Both Billings hospitals had visible and popular stakes in promoting health in the communities they serve. St. Vincent Healthcare set up a “provider lounge” so that people could chat with a nurse practitioner while seated in an easy chair. The hospital gave away bicycle helmets and performed blood pressure tests, but an even bigger hit was when a helicopter landed outside, said Nichole Miles, St. Vincent’s corporate alternative payment liaison.

Billings Clinic also used the three days “to make a lot of referrals,” said Bobbi Roberts, the hospital’s coordinator of senior services. People submitting to lab draws will soon get the results back. Then they’ll make the decision whether to schedule an appointment with their provider, she said.

“It’s about creating awareness, and it’s about helping people,” she said.

A federal parolee is in custody after allegedly leading Billings police on a series of chases around the city earlier this week.

Abortion ruling prompts protest in Billings, with varying reactions across the state

Though the striking down of Roe v. Wade by the Supreme Court will have minimal impacts to Montanans for the foreseeable future, the news still evoked a range of emotions from leaders throughout the state.

Laurel pedophile gets 80 years; victim a 'hero' for disclosing abuse

Michael Gilbert Voyles, 53, was convicted in Yellowstone County District Court earlier this year for three counts of sexual abuse which occurred over a decade ago. His conviction followed the boy he abused, now an adult, telling investigators what Voyles did to him and again recounting his trauma during the three-day trial.

Two weeks ago, a zoo official said they were committing its drag queen event even after intense blowback. On Wednesday, the event went live, a…

Shotgun blasts erupting at a birthday party over the weekend in Billings resulted in one person in custody.

If the current rate of inflation continues and the county's average growth rate holds, Yellowstone County would lose $7.5 million to inflation over the next five years, he said.

Recent flooding along the Yellowstone River has left major questions for Montana’s largest industry as Carbon County and surrounding area farmers and ranchers contend with damage to infrastructure, crops and livestock.

Billings adopts its budget, sparring over how best to use portion of public safety mill levy

Madison Flowers, 6, works on a maze using only its mirror image at the New York Life Insurance booth Saturday at the Home & Health Expo at MetraPark.

Tammy Jordan of Laurel spins yarn out of wool Saturday at the Home & Health Expo at MetraPark.

Briane Baeten, left, and her mother, Rita Baeten, check out earrings at the Gold By The Inch booth Saturday at the Home & Health Expo at MetraPark.