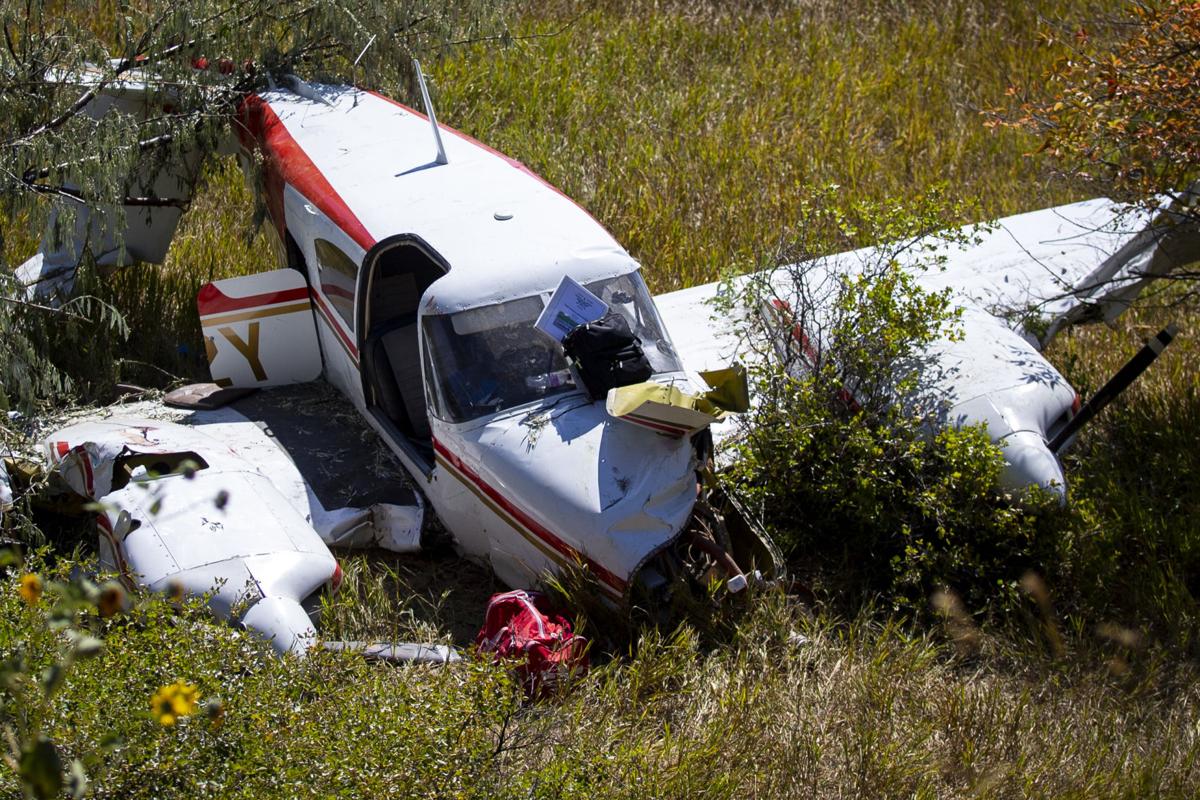 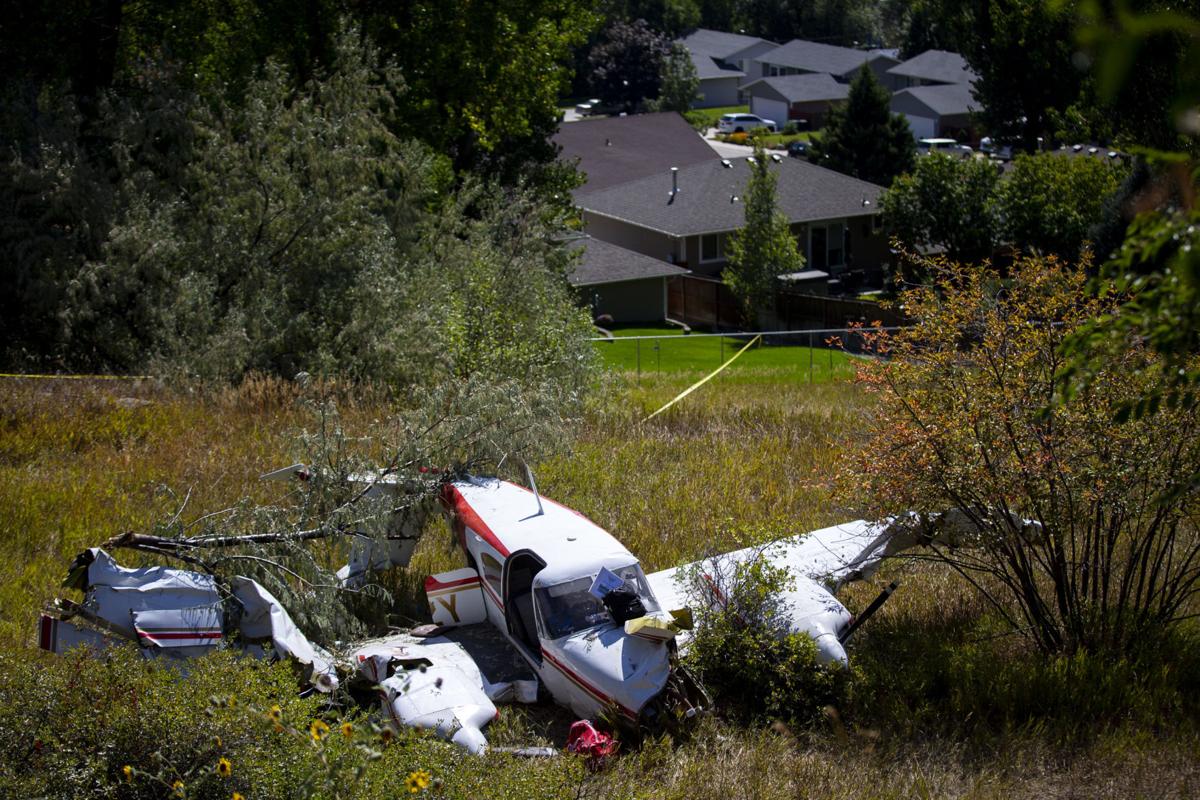 A crashed Piper Twin Comanche sits in a field near houses below the Rimrocks in Billings on Saturday, Sept. 12, 2020. 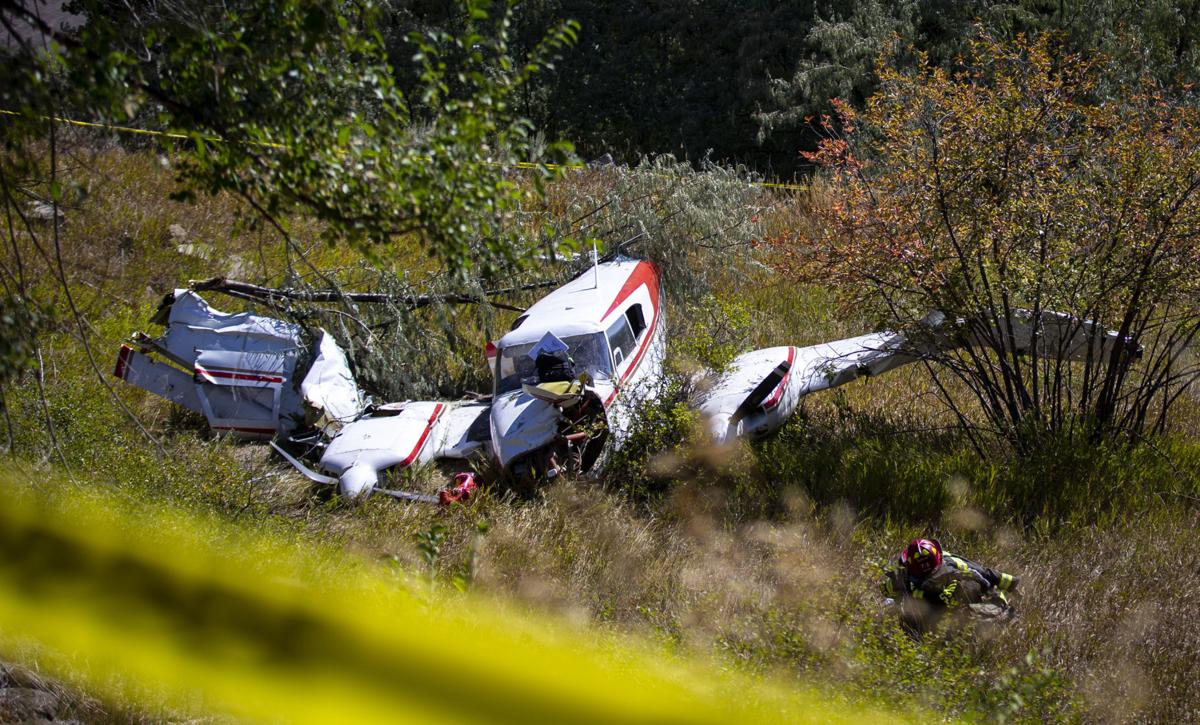 A plane crashed at the base of the Rims near North Park late Saturday morning, putting its pilot in the hospital but causing no harm otherwise.

Billings Fire Department engines and American Medical Response arrived at the scene around 11:45 a.m. after witnesses saw the plane drop at the northern end of Vuecrest Drive, just yards away from the nearest house.

“So far, we have no details on what caused the crash, but those who called it in said it just dropped right out of the sky,” said BFD Battalion Chief Ed Regele.

Regele said the pilot, who was the only person on board, was in communication with air traffic controllers at Billings Logan International Airport when the plane fell off the radar. The landing bent the wings and twisted the tail of the Piper PA-30 Twin Comanche, but caused no fire.

The pilot has been taken to the hospital to be treated for lacerations and probable head trauma, according to Regele, but was conscious when emergency crews extracted him from the plane.

Ryan Mershon, who lives nearby, said he didn’t hear or see anything until fire engines drove onto Vuecrest Drive. He said a neighbor out walking his dog saw the plane fall before texting him.

“I just can’t believe nobody was killed,” he said.

Regele said the National Transportation Safety Board has been notified, but will not be investigating the crash. Billings Police officers will take photographs of the site crash, which will be sent to the U.S. Flight Standards District Office in Helena. Ultimately, it will be the Federal Aviation Administration that determines what caused the emergency landing.

In April, a 7-seat Piper PA-31 crashed in the West End while practicing takeoffs and landings, killing its pilot and starting a small fire in the brush and timber near Rod and Gun Club Road.

More details have been released in the preliminary report of a plane crash that killed a 64-year-old Billings pilot, although a cause of the crash has not been released.

One person was killed Monday morning in a twin-engine airplane crash near Rehberg Ranch about a mile and a half west of the Billings airport.

Firefighters working in Gallatin and Musselshell counties ended the week with most of the wildfires burning in those counties under control.

A second passenger survived the crash and was transported to a hospital in Washington State, the Missoula County Sheriff's Office said.

As coronavirus cases in the Dakotas surge, anti-mask sentiment intensifies

According to Johns Hopkins University researchers, North and South Dakota rank first and second respectively in new COVID-19 cases per capita over the past two weeks.

Vice President Mike Pence is due to headline a campaign rally in southcentral Montana Monday as Republicans in the state seek to take back the governor's mansion and retain seats in the U.S. House and Senate.

Billings police responded to a shooting early Friday morning that occurred during an apparent car-jacking on Central Avenue.

Pilot who died in October crash faced turbulence, had trouble seeing at night

A crashed Piper Twin Comanche sits in a field near houses below the Rimrocks in Billings on Saturday, Sept. 12, 2020.