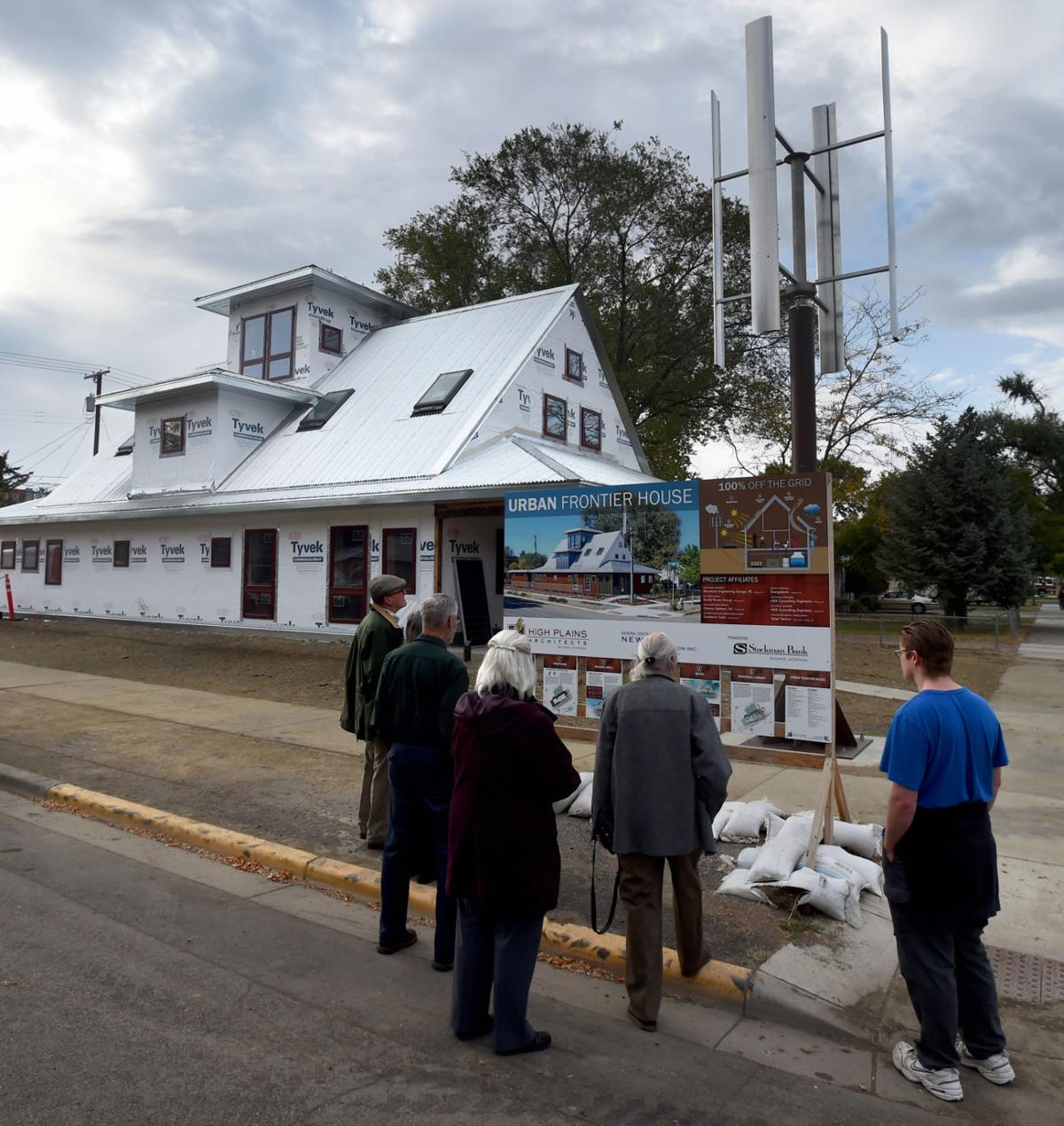 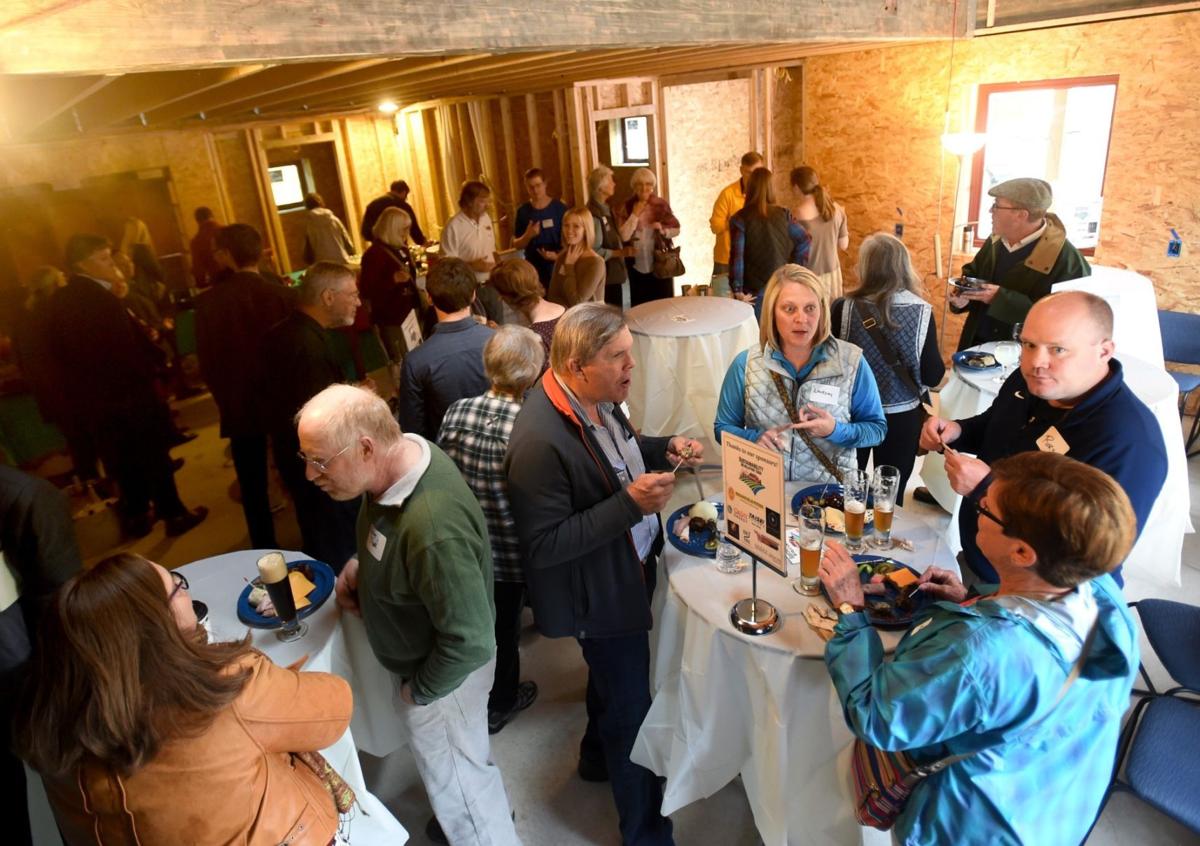 Folks tour the nearly complete Urban Frontier House at the corner of 7th Avenue North and 23rd Street North. Owners Randy and Janna Hafer of High Plains Architects will be completely off-grid with its own self-sustaining systems for energy, water and waste. 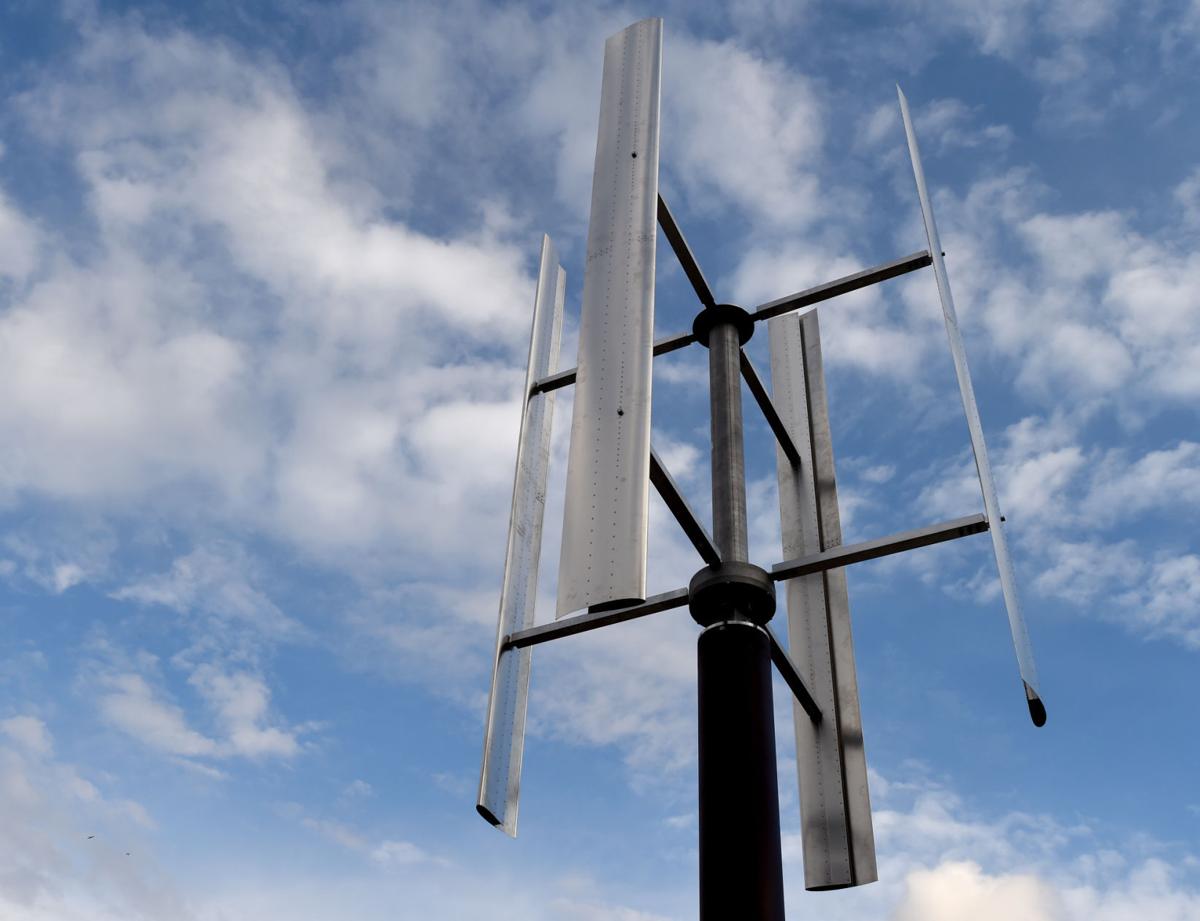 This wind turbine generates elecrictity for the  Urban Frontier House at the corner of Seventh Avenue North and 23rd Street North. Owners Randy and Janna Hafer of High Plains Architects will be completely off-grid with its own self-sustaining systems for energy, water and waste.

Randy Hafer says he’s onto something by taking a central Billings lot off the grid.

The house that he and his wife, Janna, are having built looked like a normal construction project on Friday. Wood framing and wiring sat atop the foundation, visible from the interior. Paper covered the exterior of the unfinished home.

But there’s also a roughly 20-feet-tall vertical turbine in the corner of the front yard. It’s there to provide 1 kilowatt of electrical power for the home, which will be supplemented with solar panels. Add a rainwater collection system, ventilation-based climate control and a carefully planned efficient design, and the Hafers will be living in a self-sustained home soon — among the first of its kind.

“I really think there’s potential in this house to be a game-changer,” Hafer said.

The Billings couple is months away from moving into what Hafer calls an “urban frontier house.” Situated in the North Park neighborhood along Seventh Avenue North, the structure will draw its utilities from the most public source — the wind, rain and sun.

Hafer held an open house of sorts on Friday as part of the Northern Plains Resource Council’s Sustainability Revolution Tour 2015. The Billings-based council advocates for various environmental and sustainability causes and has partnered with Hafer on a number of projects.

Among those projects is the council’s office building, which was completed in 2006 and draws 40 percent of its power from a rooftop solar array. Hafer’s own office building is another sustainability project. An architect who was educated at Stanford and Yale, Hafer founded High Plains Architects with his wife in 1999.

To hear Hafer talk about his house with Ed Gulick, an architect at High Plains and an expert in green building, they speak of it like an ongoing experiment. In the relatively young field of sustainable construction, the fine guidelines haven’t all been ironed out yet.

“Every one of our projects stands on the shoulders of the previous one,” said Gulick, who also chairs the Clean Energy Task Force for the Northern Plains Resource Council.

This house is a professional dream for Hafer that he’s chased throughout adulthood. While in college in the 1970s, he was struck by the energy crisis that led to long lines at gas pumps and uncertainty across the nation.

It was then that he started thinking about the world’s heavily used energy sources and how they can run out.

“I really spent my whole life since then thinking about it,” Hafer said.

A decade ago, Hafer said that he got serious about building a sustainable home. In 2008, he closed on the corner lot. It used to be a dirt parking area.

The long process that followed was chronicled mostly by Janna Hafer on a blog. Things like the power source maximization, heat retention and air circulation were heavily planned.

One of the features of the house is that it doesn’t have a typical heat source, like a boiler or furnace. Sunlight and body heat will be trapped in the highly insulated structure and carefully ventilated for retention. In the summer, the home will be cooled passively through a high-low ventilation system.

Through “intensive energy modeling” and knowledge from past projects, Hafer tried to provide enough insulation, but not too much. He says he’ll see later how it works.

“Especially on the heating side, we’re going to learn,” he said.

Two major steps came in 2014. A few banks turned them down for a loan on the urban frontier house, but one came through in May of that year. In July, they received building permits from the city after going through the specifics of the peculiar house with officials.

One of the main features of the house is its power source — the vertical-axis turbine. Its long blades revolve around a pole and generate electricity. The design is from Taisei Techno LTC, a company based in Japan. The company says that the turbine design generates electricity at lower wind speeds and is very quiet.

Rhyno Stinchfield, a Taisei agent based in Billings, said the turbine is just gaining ground in the United States. It’s starting in Billings, too. City College previously purchased one of the turbines to run a crossing light.

Stinchfield said the Hafers’ home will be the first residence to run off of a vertical turbine with a solar supplement.

The home will also collect rainwater, which will be stored in the basement and treated after use. A composter will handle solid waste.

Once fully implemented, Hafer said the home won’t be connected to city sewer, water, electricity or gas services. For a while after they move in, they will connect to the electricity grid until they learn the extent of their alternative power capabilities.

Another main feature of the house is that is looks like a house. Hafer said that part of his goal was to make a sustainable home model that’s attainable and very much like a regular family home. And with rapid technology advances and the cost of sustainable systems coming down, it’s something that Hafer sees more people looking at when building a home.

“If we can do that with a budget that’s not ridiculous, then the sky’s the limit,” he said.

Hafer has been passionate about sustainable building projects throughout his professional career. He once gave a TED talk called “Saving the Planet One Building at a Time.”

Billings is home to a number of structures that have received the certification known as LEED. It’s a widely recognized green construction program that’s run by the U.S. Green Building Council.

Hafer has worked on the Tracy Lofts, the Klos Building and the Swift Building Lofts, all of which are local buildings that have received LEED “platinum” status.

But this home project is special to Hafer for the most obvious reason: It’s a house for him and his wife. And they’ll be able to live in something that’s equal parts shelter and symbol.

Hafer hopes they can move in by Christmas, but he doesn’t want to wait that long.

“We’re going to have Thanksgiving in this house,” he said.

Sweets for the sweet: Architects, chefs team up for gingerbread competition

Emarie Skelton’s business card says she’s an architect in training, but when it comes to designing and helping to construct gingerbread houses…

A national publication has given Billings nearly top marks for sustainability.

Folks tour the nearly complete Urban Frontier House at the corner of 7th Avenue North and 23rd Street North. Owners Randy and Janna Hafer of High Plains Architects will be completely off-grid with its own self-sustaining systems for energy, water and waste.

This wind turbine generates elecrictity for the  Urban Frontier House at the corner of Seventh Avenue North and 23rd Street North. Owners Randy and Janna Hafer of High Plains Architects will be completely off-grid with its own self-sustaining systems for energy, water and waste.