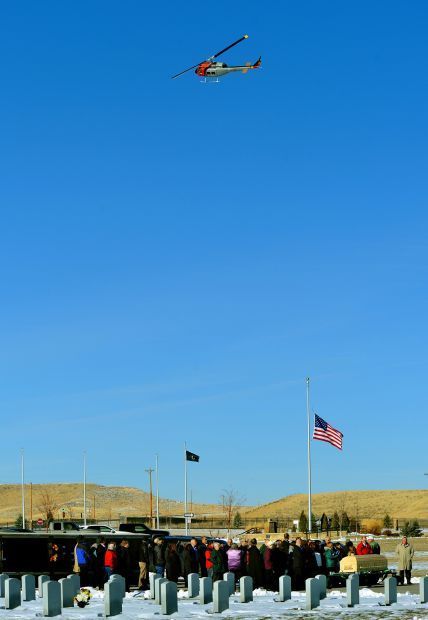 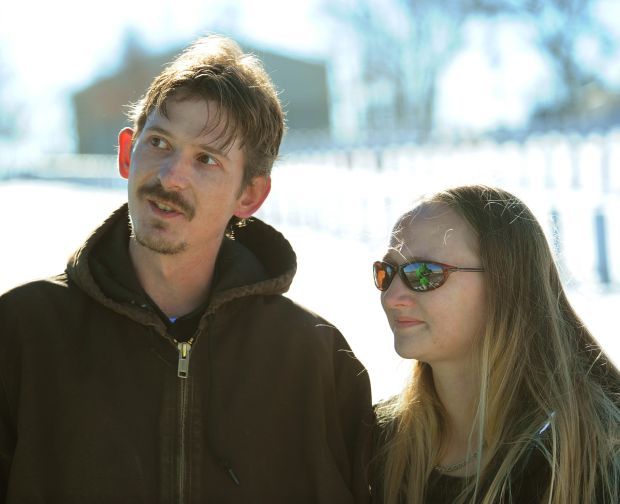 Jesse and Sara Doheny talk about Jesse’s father, Francis, after his funeral at the Yellowstone National Cemetery on Wednesday.

LAUREL — Every attendee at the funeral of Francis Vincent Doheny could feel the pounding of a UH-1 Iroquois helicopter as it passed overhead, chugging over the Yellowstone National Cemetery at 110 knots.

The “Huey” helicopter, owned by Billings Flying Service, is the same model of aircraft that Laurel native Doheny, 66, flew on risky support missions for the 19th Cavalry of the Fort Hood, Texas-based U.S. Army regiment.

During his one year of combat during the height of the Vietnam War, the Huey pilot received three Purple Hearts.

“I don’t know how he made it, but he did,” said his son, Jesse Doheny, who served in the Army for 11 years and is the recipient of two Purple Hearts.

The two men served in the same regiment 30 years apart.

Sharing his army experience with his father brought them closer together, said Doheny, who has three sisters.

In Vietnam, the elder Doheny flew dangerous support missions putting soldiers on the ground in parts of the country that saw some of the heaviest fighting, Jesse said.

The constant fire on his aircraft led to 12 helicopter crashes. One crash left him with burns so severe he required three months of treatment. He carried scars on his back for the rest of his life.

“Thirteen was his unlucky number,” Doheny said. He crashed his 13th and final aircraft while testing the then-new AH-64 Apache helicopters at Fort Hood.

When Doheny returned from his service, he married his high school sweetheart, Michele, and worked as a telephone specialist for 30 years in Laurel.

Doheny and his wife retired in 2003 to a log cabin and shed he built in Columbus and kept busy with woodworking and his business, Doheny Construction.

He was known to be stern but was a wise teacher on many things, from carpentry to chess, Doheny said.

“Dad spent all this time teaching me stuff, and now I’m teaching my kids stuff,” Doheny said, who works part time at Best Buy and for his own carpentry company.

From an early age, Doheny taught his son chess, and the strategy paid off on the battlefield and in life. Doheny placed a queen from their chess set into his father’s casket and kept the king.

“He taught me how to be a tactician,” he said. “If it weren’t for that, I definitely wouldn’t be here today.”

US Navy sailor puts training to work in boat rescue

US Navy sailor puts training to work in boat rescue

Jesse and Sara Doheny talk about Jesse’s father, Francis, after his funeral at the Yellowstone National Cemetery on Wednesday.