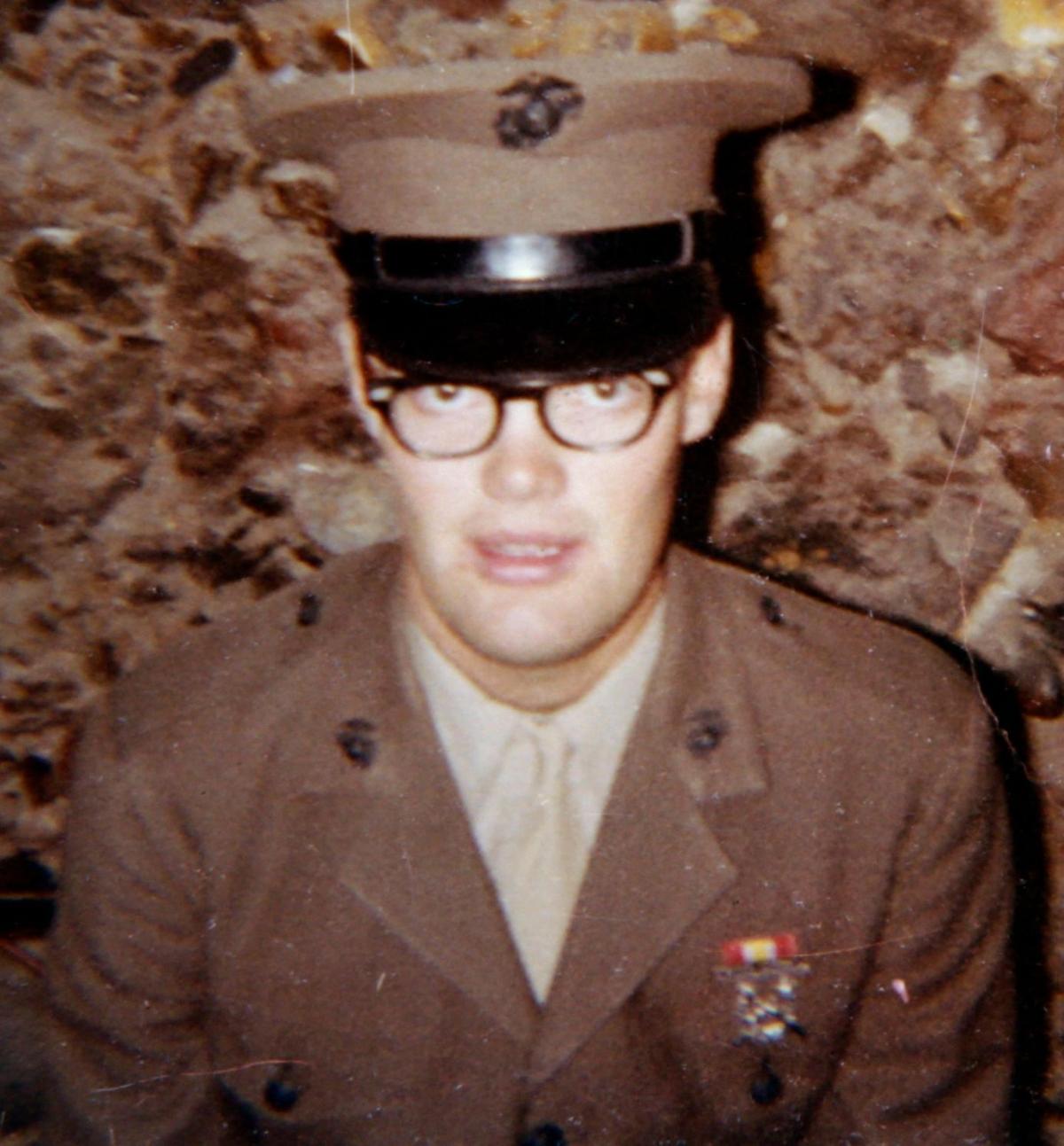 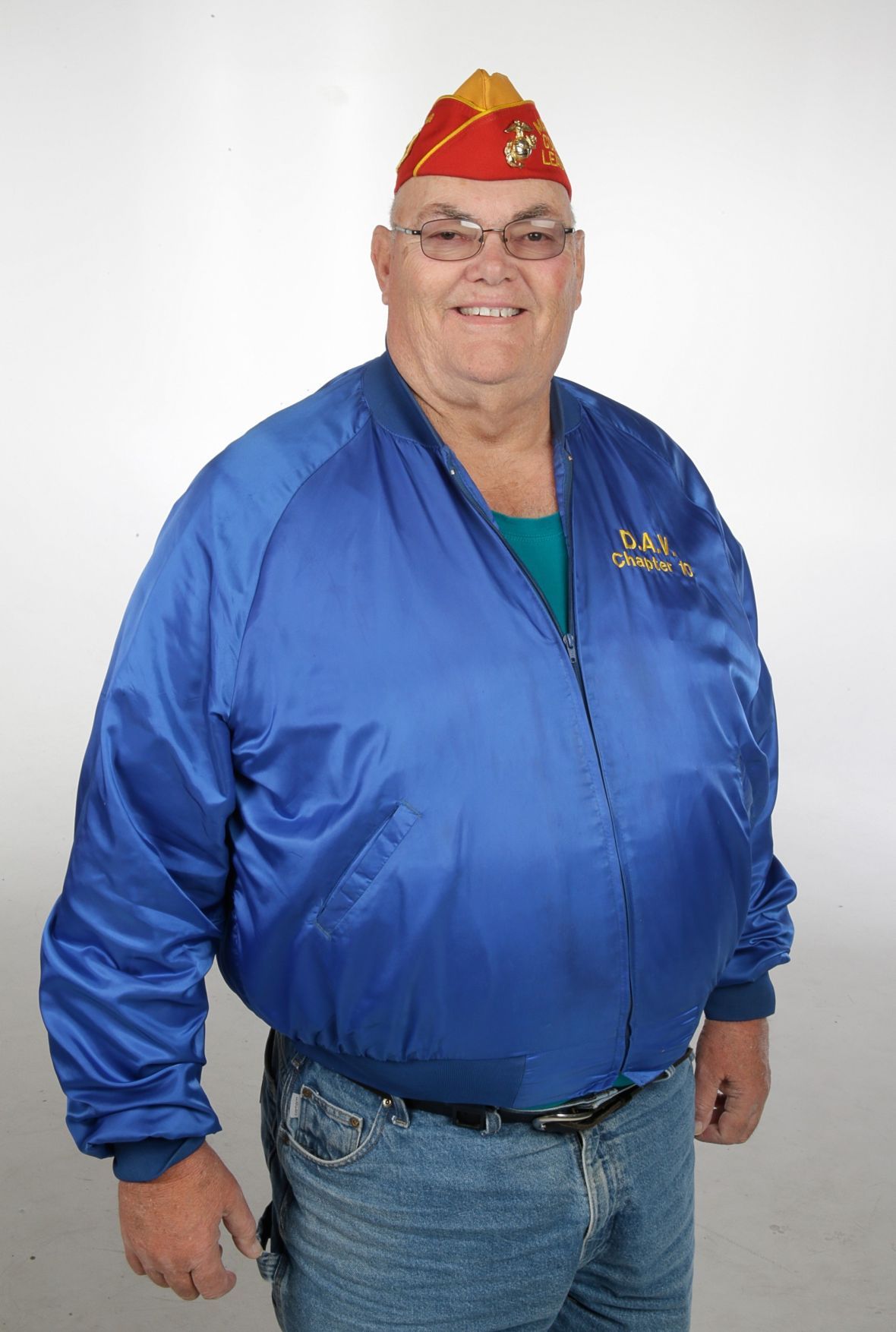 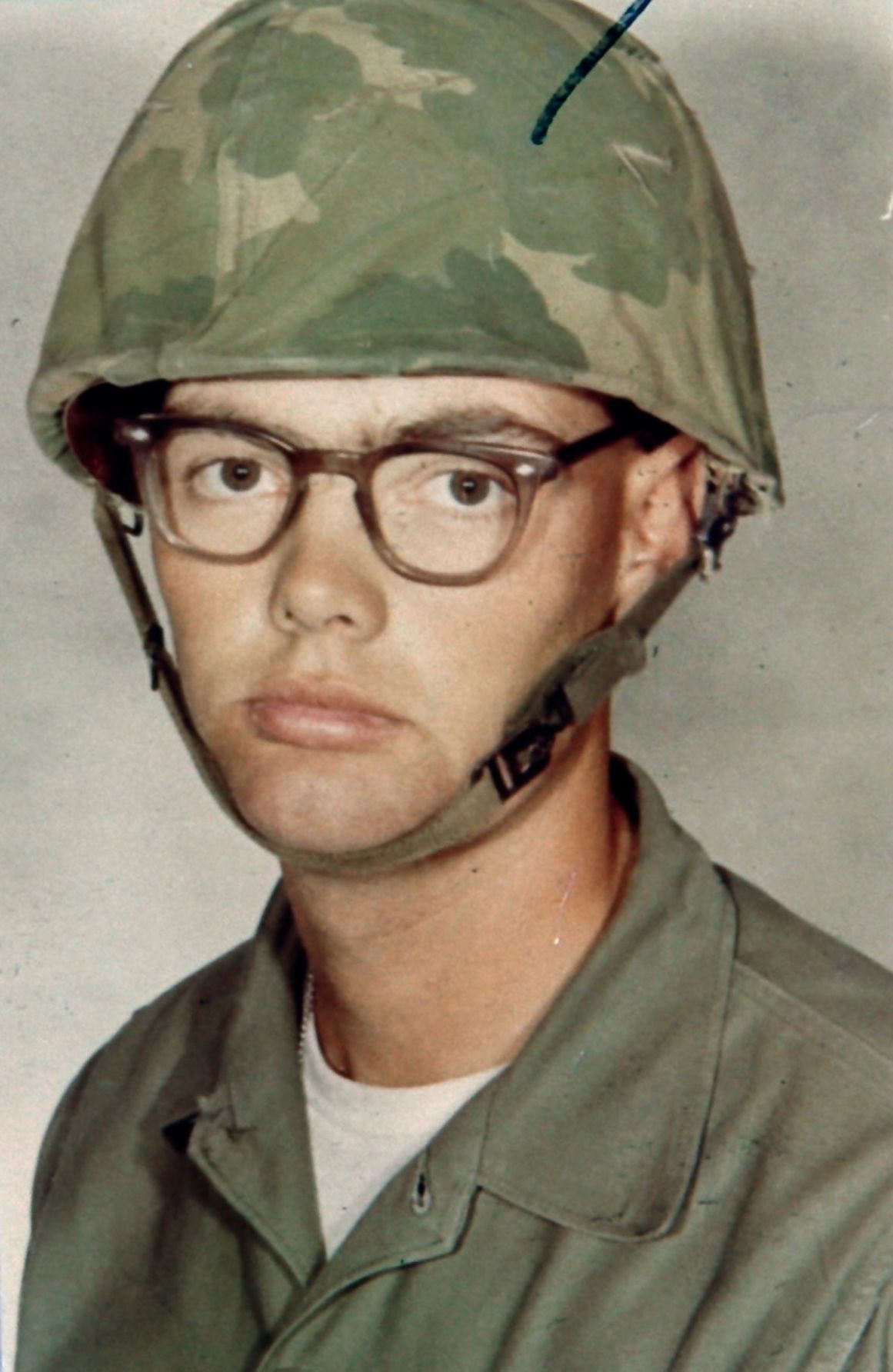 Veteran Lloyd Metcalf is pictured in his gear. 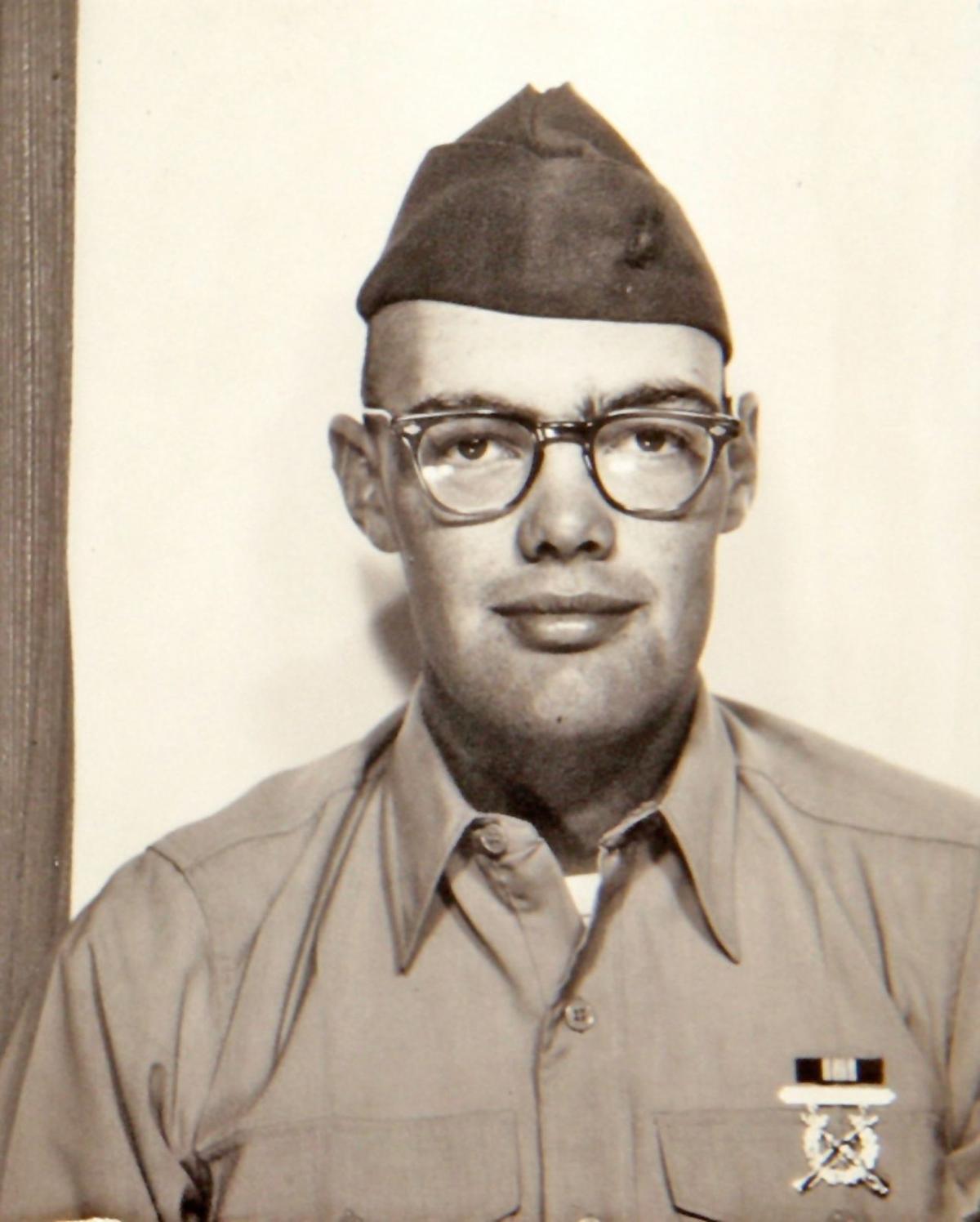 Lloyd Metcalf joined in the U.S. Marines in 1967. He went to school in Custer. He enlisted in the Marine Corps on his 18th birthday. This is part of his Vietnam story.

Metcalf: "During high school, I was six-foot, eight — all feet and legs and kind of awkward, and there were times I thought, 'Why am I taking crap from kids in high school?' So I quit high school and went into the Marine Corps."

Gazette: It's 1968, were you worried about going into a war?

He went to boot camp at San Diego, after induction in Butte.

Metcalf: "You went in there in the middle of the night. So we got into the Marine Corps Recruit Depot at 10:30 or 11 at night. Their main deal was to keep you awake for the first 24 hours or so, and they got to call home and tell your mom and dad that you were there safe.

"Then they went through the haircuts and all the rigamaroll that you see on TV sometimes on 'Full Metal Jacket,' that's the way it was. And as a Marine, you'll never ever forget the yellow footprints painted on the deck. You pull in in a school bus from the airport, and a sergeant comes on hollering, 'You scumbags, pukes,' whatever. He called us 'girls' and when they were really mad they called us 'sweethearts.' But you get on the footprints, and we stood on them. We stood on them maybe an hour, hour-and-a-half before they took us off and into a room and you made a phone call (home), and then they made us put all of our personal belongings in a box. We didn't get to keep nothing — driver's license, Social Security cards, nothing. All form of ID was shipped home."

He went through basic and infantry training. He was "a grunt rifleman." He got his orders for Vietnam and then flew into Da Nang.

Metcalf: "We circled Da Nang for an hour or so because they were rocketing the airfield. We finally got to go onto land. When we landed, all of our gear was in a duffel bag at the end of the plane, and as we walked off the plane, we grabbed our bag.

"We weren't in country 10 minutes when someone hollered, 'Incoming!.' Well, here you've got 250, 300 green Marines right out of boot camp, and someone hollers, 'Incoming! Find cover!' The only cover there is is those trucks and those C141 jet transports. That multi-million dollar airplane took the second rocket. So here we are 10 minutes in country and the airplane we had flew in country on was on fire and burning."

Gazette: What is going through your mind?

Gazette: So the plane you were on — you can't take cover there. Where'd you take cover?

Metcalf: "We took cover under them trucks the best we could. As soon as the plane got hit, the rockets quit coming. Their intent, in my opinion, ... was to damage that airplane so that it doesn't get to take off again, and they did that."

He was assigned to the Marines at Dong Ha.

Metcalf: "(When we arrived), they threw the M16 at me. I said, 'That's not what I qualified with.' They said, 'Well tough, that's what you get.' We got an M16, two magazines, a flak jacket and got this thing that carried six or nine hand grenades in it, a backpack and belt to put a couple of magazines in."

He would quickly go to "The Rockpile," about 3 miles from Cambodia and 6 miles from Khe Sanh. It was a firebase.

Metcalf: "Khe Sanh, at the time I was there, was under continuous siege. ... They tried to assault the lines every other day or so. They'd come in strong and shoot, shoot, shoot."

Gazette: Was this North Vietnamese Army or Viet Cong?

Metcalf: "It was both. It was NVA and Viet Cong. At the Rockpile — it's kind of like Pompeys Pillar; a bunch of razorback sharp rocks, tall cliffs like the Rims here — and on top of that there was an observation post. There was a platoon of Marines on the observation deck observing things as far as they could see.

"In that particular time, the NVA, the regulars, were bringing elephant convoys through with weaponry; mostly it was rockets. (Reconnaissance) said they were coming through this valley and we need to go out in full force, and we out in battalion force and we engaged this division-sized with hundreds of elephants bringing in rockets. They gave every one of us a 3.5 rocket launcher, and I got to shoot at an elephant. What a mess."

Gazette: In basic, they don't train you to shoot elephants, I'm guessing.

Metcalf: "As a kid growing up in Montana, I shot deer and antelope and tried to shoot an elk, so I had an idea where to shoot. But with a 3.5 rocket launcher, you can make mincemeat out of elephant when you hit him.

"It was a mess. And then you hit him and they're full of rockets, well then, it was like it was the Fourth of July. ... Things would catch fire, and you had to get down, close to the ground because you never knew where that stuff was going to go.

"That first time we went out, I believe we killed about 75 elephants, and they were all loaded down with 15, 20 rockets. They launched the rockets. They had a makeshift launch. They took our junk and used it to their advantage and the laid the rockets on these.

"It was like the rockets you could buy at the Fourth of July; they just pointed them in the general direction, and if they made it there and did what they were supposed to do, yay. But if not, the North Vietnamese were making them just as fast as those guys could burn them up. There weren't mortars, they were just rockets. They just laid them on the deal and aimed toward where they thought it should go."

Gazette: At the Rockpile, was it under constant siege?

Metcalf: "It was four or five times in a month they'd try. They'd give themselves away. It was usually early in the morning. They weren't smart enough to shut up. Marijuana grew everywhere out there. They would use hashish. That's what they'd get high on. They'd be two or three clicks out, but you'd get 500 or 600 of them together and they'd get talking and you could hear them. They'd laugh a little bit and oh, they're going to try and overrun us in the morning. So everybody gets ready, and of course that brings everybody to full alert.

"You don't get much sleep that night. They didn't care. In the middle of the night, they'd try the siege. We'd make sure our Claymores (mines) and booby traps were set to get them. We had a forward observation (team)."

Gazette: Was that spooky to hear them out there?

Metcalf: "We just thought they were stupid. I mean, today our guys in Iraq, they don't have to put up with high, dope-ridden guys, high on hashish and wacky tabbacky for an assault."

Gazette: What do you think of the firebase? What's it look like?

Metcalf: "It was beautiful country, and the jungle is thick. You could go out on patrol one day. We always had one or two guys with machetes that didn't go out on a well-beaten path. We made our own ... because of ambush or booby traps; they'd booby trap everything.

"If you went out one way one week, then three weeks later, you'd try to find the way you went out coming back. The jungle grew so fast that it was terribly thick. The steep, hilly country was nice other than it was covered in jungle and the valleys ... wherever they had a good, level country was a rice paddy with a village with five or six huts maybe along this highway.

Gazette: I've heard that when the 52s dropped the bombs, that the whole ground ...

Metcalf: "Would shake. It'd be a rumble. It lit up. You could see big white, like flashbulbs, go off. You'd see it all the way across the horizon. Khe Sanh was 12 clicks — kilometers — away. The guns we had would shoot over Khe Sanh to the DMZ — daily. If it wasn't the howitzers, it was the 175s. If you were in your rack at night and those 175s started, you might as well get up and get out. They'll fire 25 or 25 round missions, and they're shooting 500- or 600-pound projectiles, 17 miles away.The concussion if you're sitting in your hooch and you had a candle, and the gun was 100 yards way, it blew your candle out. Or if you were asleep in your rack, it'd roll you out on the ground.

"The food there was 1942 C-rations because every time we'd get a cook on base, they'd mortar or rocket the base and the cook would get killed. We were eating C-rations, and at noon they'd cook a hot soup up. We never could keep a cook."

Lloyd Metcalf served in the U.S. Marines during Vietnam. In addition to his experience, he recounts one of the more incredible stories, having to destroy the enemy who was using elephants to transport rockets into South Vietnam -- a good reminder of how complex and different the war could be.

The Billings Police Department is investigating a shooting reported Sunday morning that left a woman injured.

Charlie Reimers was the getaway driver and supplied the shotgun that killed man in meth robbery.

Veteran Lloyd Metcalf is pictured in his gear.