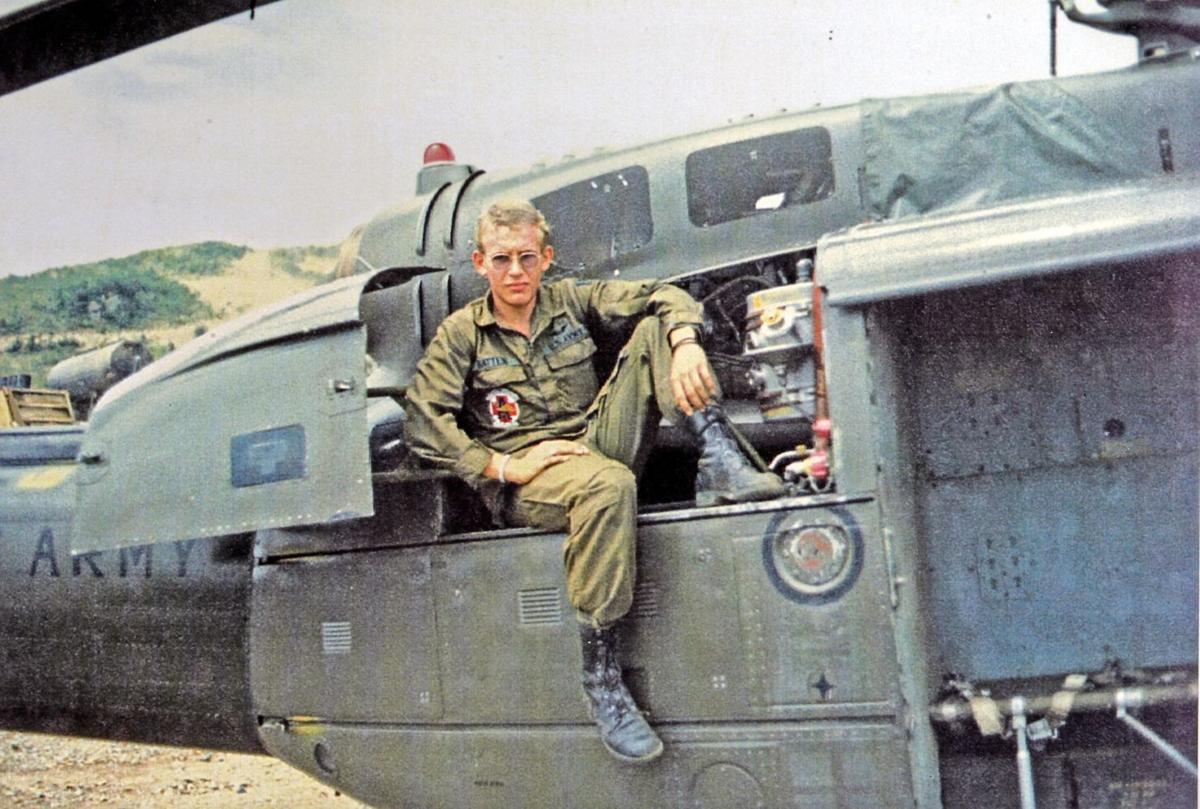 Vietnam veteran Dean Batten and his helicopter in Vietnam. 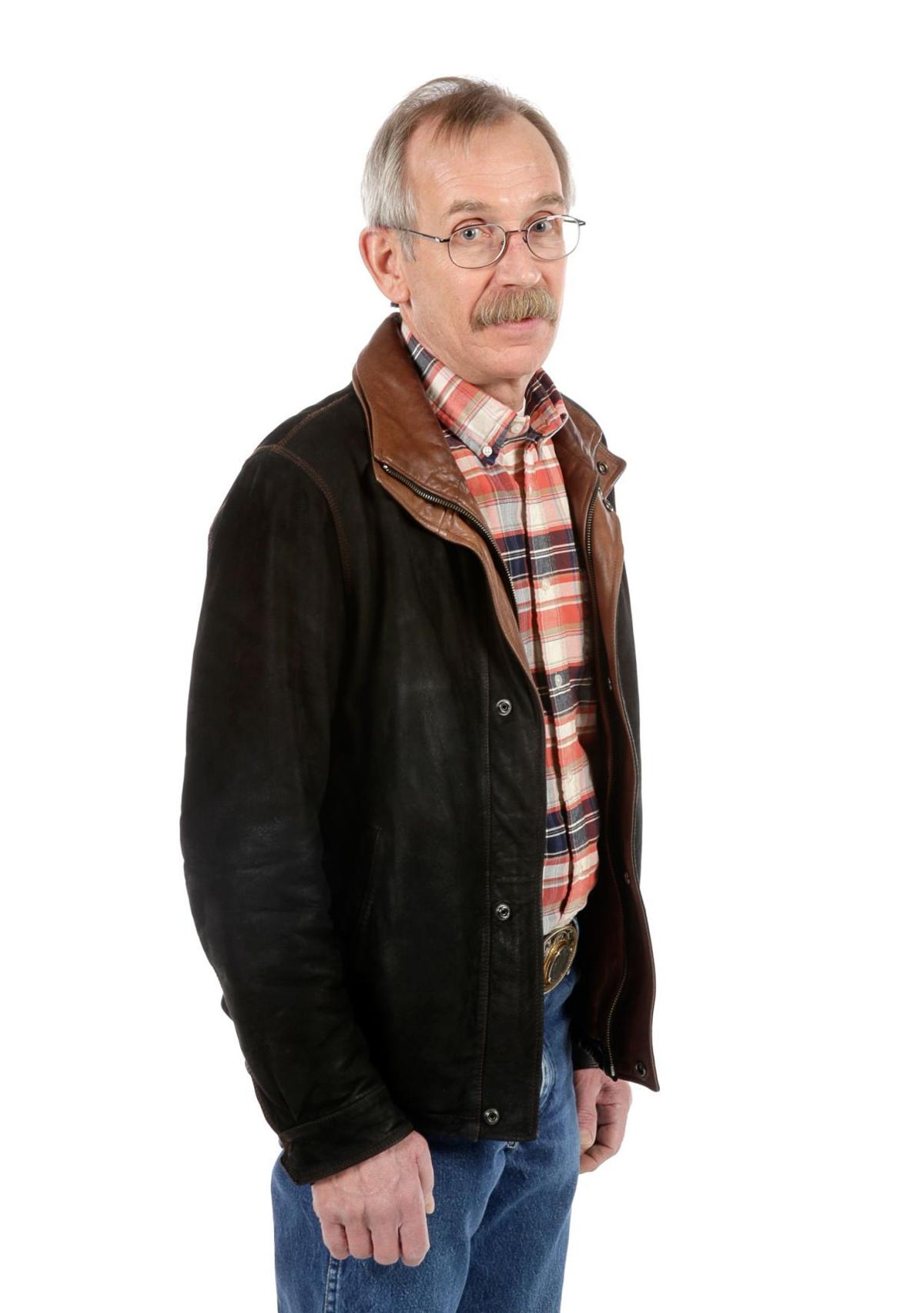 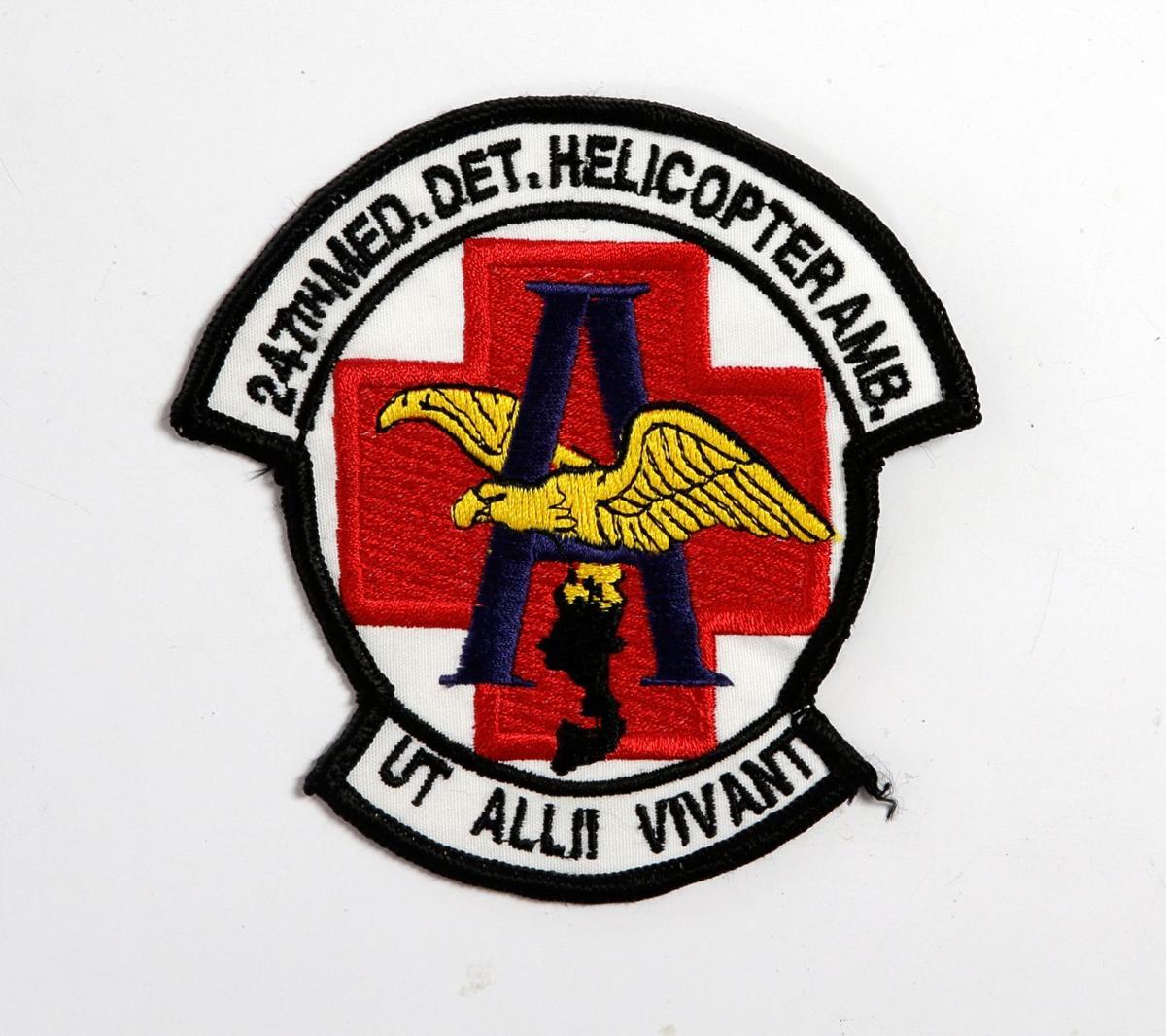 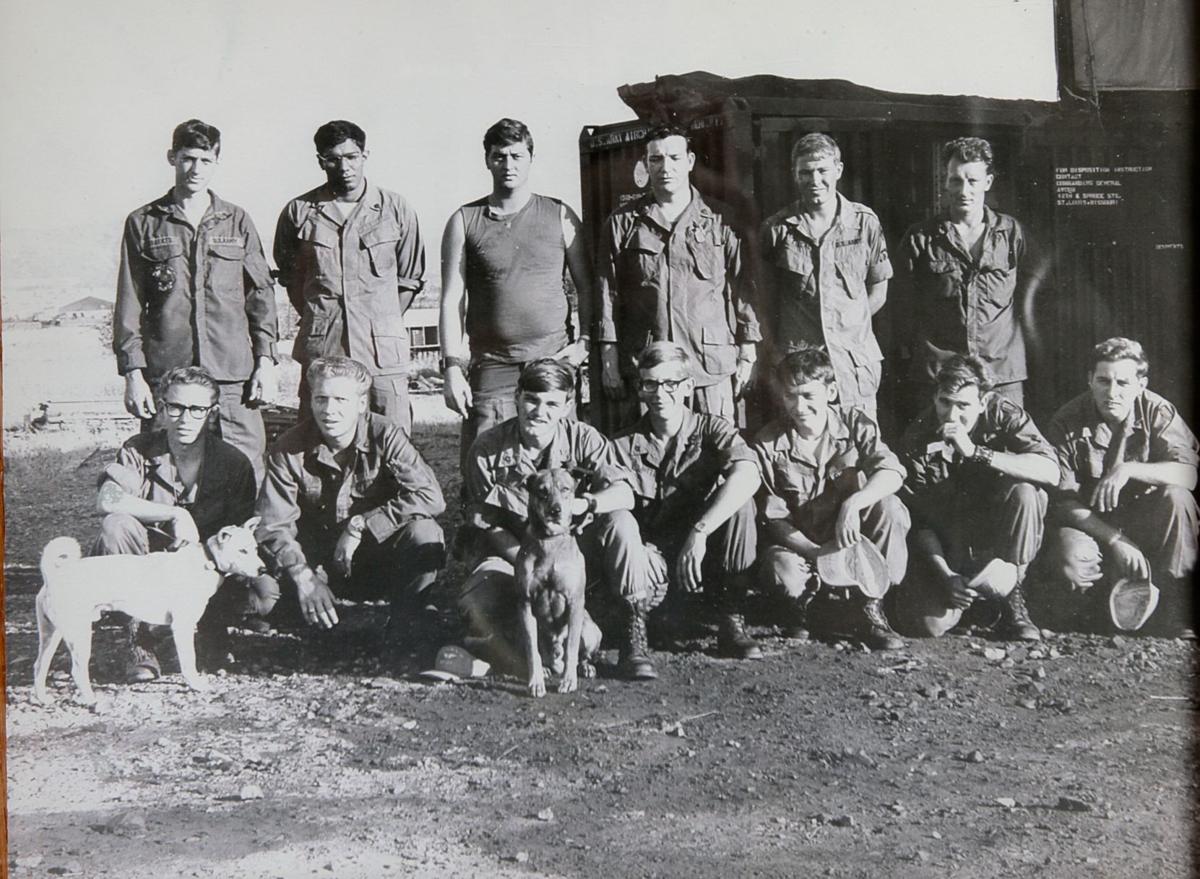 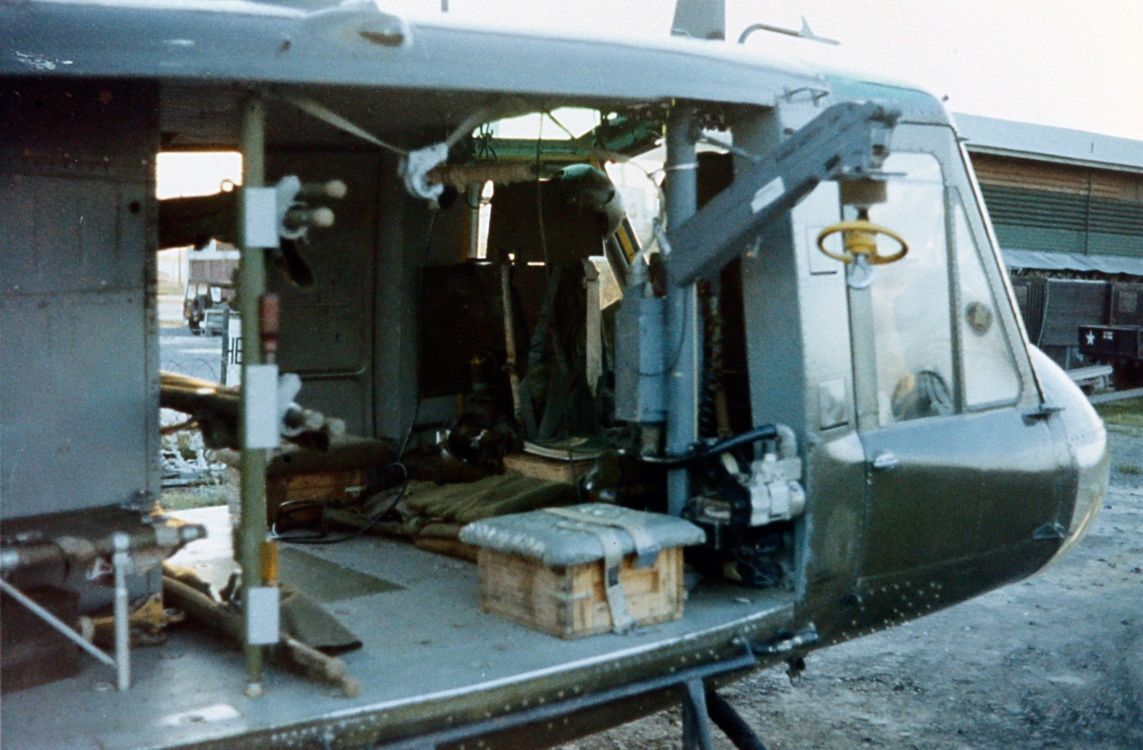 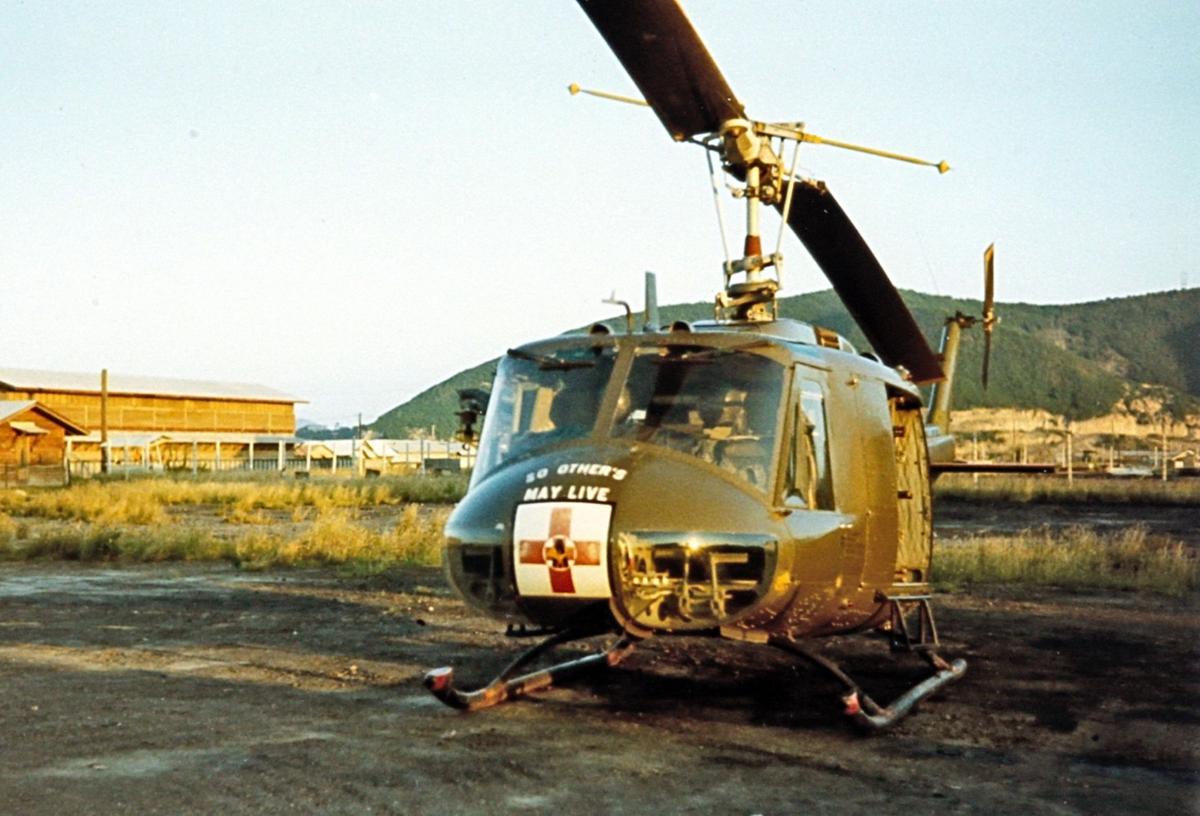 Message on the back of a cartoon from Vietnam.

Dean Batten was with the U.S. Army from 1970 to 1972. He was born and raised in Billings, graduating from Billings West High in 1970. He was a dustoff helicopter crew chief. This is part of his Vietnam story.

Batten went to basic training at Fort Lewis, Wash. He went to Fort Rucker, Ala., for maintenance school for helicopters.

Gazette: When you enlisted in 1970, the Vietnam War had been going on for some time. Did that worry you?

Batten: "In a way, I kind of thought it was the right thing to do. My dad was in the Second World War. He was in the Battle of the Bulge. I have a great uncle who was buried at Custer Battlefield and he was in the First World War, he got mustard gas and died fairly young of lung cancer."

Batten: "It was kind of funny because my mom sent me a chocolate cake. When I was in boot camp, we couldn't have sweets. Anyway, my drill sergeant he said, 'OK.' He got kind of on my case the second week I was there because being in the Reserve Officers Training Program you could enlist as an E2 instead of E1 so I had this bright idea that I would go talk to the drill sergeants and I had this little paper with me saying that I completed this and blah, blah, blah. I went out there and he said, 'Well, let's go see the first sergeant.' Well, we go see the first sergeant and he's not there. My drill sergeant looks at the paper, crumples it just like that and throws it in the garbage can and he goes, 'I'll make sure he gets it. Will there be anything else?' I said, 'No, drill sergeant.' I walked out of there and thought, 'Man, he's going to be on my case.' And he was on my case for a couple of weeks until we qualified with the M-16s, I shot fourth-highest in my company, after that, he loved me."

When Batten was at Fort Rucker, anyone who signed up for door gunner school was going to Vietnam. He signed up, but was never trained as a door gunner. Instead, they sent him to maintenance school. And, dustoff (medical evacuation) helicopters used for transporting wounded or dead troops had no door guns. Batten was trained to work on the UH-1, "Huey."

He went to Vietnam, flying into Bien Hoa and then got orders to Long Binh. Then he went to Phan Rang Air Base. He had 90 days on-the-job training. Crew chiefs were responsible for the maintenance of the UH-1.

Batten: "The first time I got broke in, picking up wounded, it was 2:30 in the morning and we needed to do a refuel and Song Mao was a little engineer camp and we'd do hot refuels there, and they had this generator there but you have to start it. It was one of those old rope-type ones where you had to wrap a rope around it and pull it. It was about the second pull and it's not firing up and I started wrapping a rope around it for a third pull and I go, 'Wow, fireflies.' So, I pull it and turn around and said, 'Them ain't fireflies.' And the next thing I knew, was Sandy (the medic) has ahold of me and I heard the aircraft started winding up because 6,600 RPM was flight-idle. Anyway, they started cranking up and that's what got my attention when I turned around. He's got me and carrying me and I'm trying to run, and he throws me in the helicopter, flies in on top of me and we're gone. And the pilot goes, 'We almost left you, boy.' After that, if I heard that engine start winding up, man, it doesn't matter, I am getting out of there, drop a patient, whatever. I am not getting left."

Gazette: Being from Montana, how did Vietnam look?

Batten: "I thought it was pretty. I thought some of it, the mountains around Nha Trang, reminded me of Montana a bit. But, when you got into the triple canopy jungles, the farther west your desolate, man."

Gazette: The dustoffs have red crosses on the doors, the nose, the bottoms and tails. Did that stop it from becoming a target?

Batten: "Uh, no....We flew any kind of weather, night or day, anytime... You could be working on your bird, cleaning it up and you get a mission, boom, you go. Usually me and my medic, we'd turn the radios on and we'd be listening to the Armed Forces Radio Network. We'd be listening to who knows? The Doors, The Who, The Beatles, I mean, you'd be listening to Motown. Motown was real big in Vietnam. The next thing you know, the aircraft commander would come on, 'Everybody on 1, and we all switch on 1 and everybody's talking.' I'm like, 'Clear on left, clear on right,' and the medic does the same thing. We had three different kinds of pick-ups, you'd land in a landing zone. Some of them, the firefight's already over; some of them you'd go in and they're hot and they'd tell us. Then we had hoist missions and hover-holds. Hover-holds you just hover down, usually the Army of the Republic of Vietnam soldiers would take patient and wrap them in a poncho and tie them to a log; the good thing about my unit was that we had steps in our helicopters so that you could jump down on the steps and reach down and pull them up into the helicopter. Then you had your hoist missions where you drop the penetrator down about 75, 100 feet, tree-top level. I'm sitting up there on the steps with a cable and a hand-held operator, dropping this penetrator down and the three-prong would open up."

Gazette: Are you tied in or roped in?

Batten: "They told us we could wear a monkey belt. It got in the way. I tried it once. It was just a big hassle. I was more mobile. It was kind of like of being a little daredevil. You're sitting on the steps, pulling these guys up and I remember one time pulling a couple of guys up from the 101st in Nha Trang. I remember when they got eye level, their eyes were as big as saucers. I jumped back in and grabbed a cable and pulled them back into the hellhole. We usually went in and you'd load patients and you're gone. We didn't want to spend more than two minutes and I think our life expectancy was 90 seconds (before getting shot at). They said that dustoff had three times more losses than others....The only protection you had was a 40-pound porcelain vest and an M16. Some of the guys had M79s and sawed off M16s. Pilots had a .38 shoulder holsters. They carried sidearm rifles."

Gazette: Was it a vulnerable feeling?

Batten: "If they were too hot, we'd get gun support. We'd have assault helicopters flying over you, giving you support. Fortunately, I was never shot down, but I came close it one night. Down on Whiskey Mountain, we had an ARVN compound that got rocketed. At 2:30 in the morning, we go in there and two mamsans got their babysans that have shrapnel wounds, little toddler kids. They're crying, they're bleeding. We get them loaded up and as soon as we left the LZ, kaboom. Another rocket had come in and took out our rotor wash and put us in a tailspin, I'm going, 'Holy crap, man.' I thought we were going down."

Gazette: How did you get out of that?

Batten: "We went into a tail rotor spin....We're spinning around and I thought we were going down and Lt. Hogan managed to pull us out of it at just the right time, I guess. I had to think the Lord has his hand on all of us. We got it going again and we got out of there."

Gazette: What did you think of the ROKs (Korean soldiers) and the ARVN soldiers?

Gazette: What were the most common kind of wounds that you will pick up?

Batten: "You can't imagine. Those guys looked like they had been run through a meat grinder sometimes. It was horrible. A lot of gun shot wounds to chest."

Gazette: You saw what happened, first-hand, and what war does to people.

Batten: "To this day, I still won't eat Spanish rice. The reason for that is you'd go into an LZ and you'd pick up some ARVNs that are wounded, head wounds. ... You end up helping the medics. And you'd give the ARVNs mouth-to-mouth and the next thing you know you have a mouthful of blood and rice. It's like to this day, I can't stand it. I puts me right back there."

Gazette: How do you not let loading dead and wounded get to you, day-in, day-out?

Batten: "Oh, I don't know. It was all in day's work, the way I looked at it. I think the espirit de corps was high in the dustoff crew. We looked at it doing our job. Our unit motto was to save a life. That's what we tried to do. There was some real sad times. I used to get upset because every now and then my medics would lose a patient. They'd cry. That used to bother me. I was like, 'We ain't got time for this.' It hardened me."

Gazette: Were you amazed that some of them lived or did you know what happened to your patients?

Batten: "A lot of them we didn't know. I think one of the things that was a turning point for me: I had to go pick up and engineer down in Song Mao. We picked him up in leather restraints, rabies. He died three days later. We took him to Cam Rahn and dropped him off. And, we found out three days later he had died. I had to go get the dog the same day. We dropped him off and went back to get the dog. Little metal case, little white dog, (growling) and I was like 'Whoa.' That kind of was a turning point for me and I started questioning, 'What are we doing here?' The senselessness of it. There's no reason someone should be dying of rabies."

A Missing Endangered Person Advisory has been canceled for a 45-year-old man last seen at his Billings home on Monday.

Filming in Big Horn County is expected to begin soon for a storm chaser action movie called "Supercell." The movie has a cast including actor …

Vietnam veteran Dean Batten and his helicopter in Vietnam.

Message on the back of a cartoon from Vietnam.