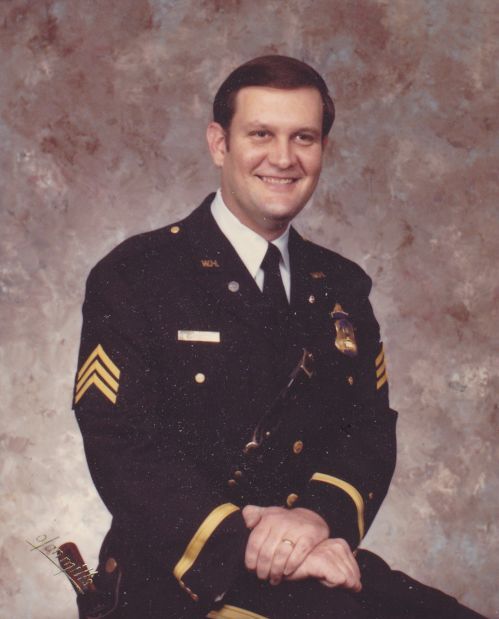 John Howard was a sergeant with the U.S. Secret Service’s Uniformed Division and served at the White House. He was on duty the day that President Nixon resigned, 40 years ago Friday, on Aug. 8, 1974. 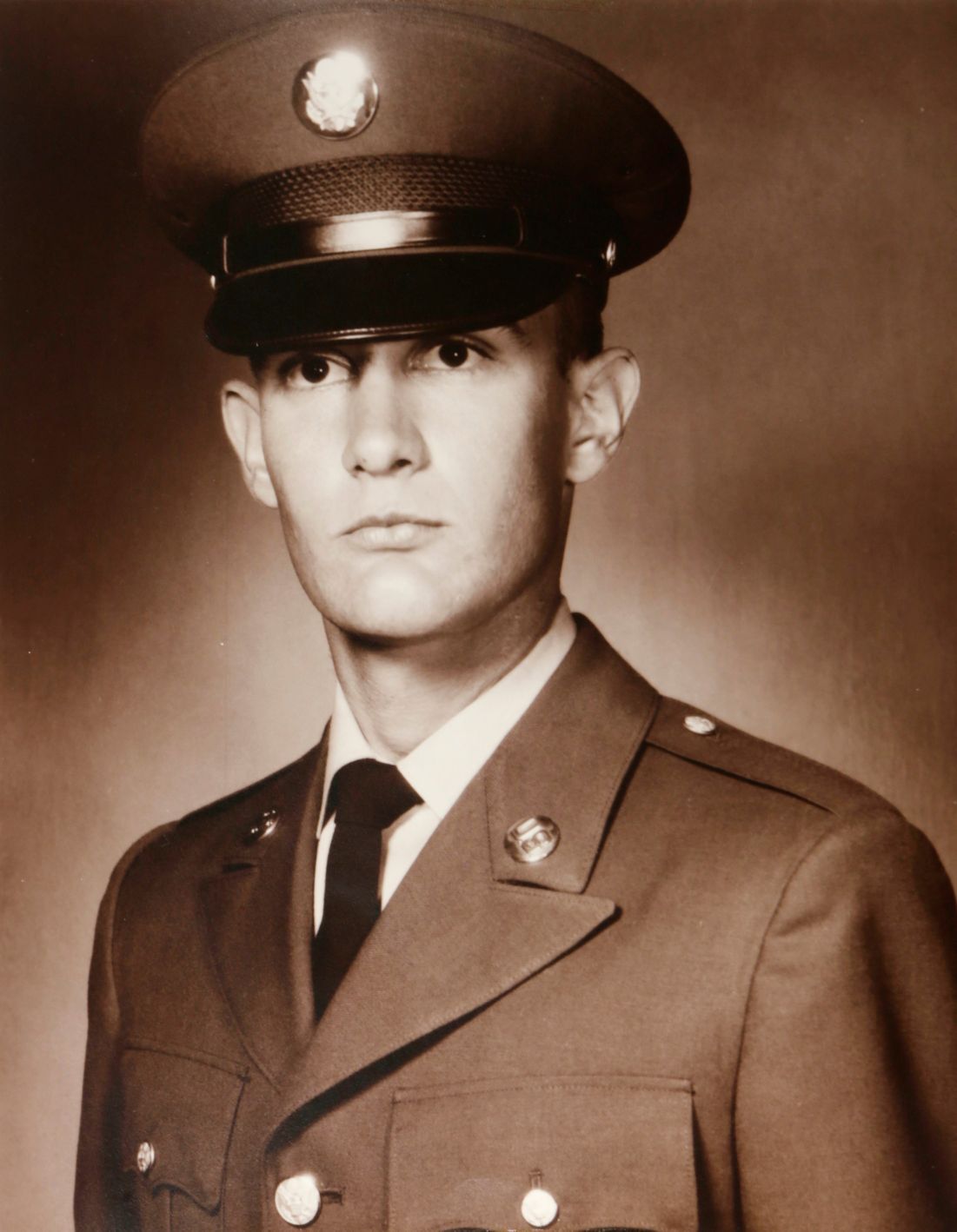 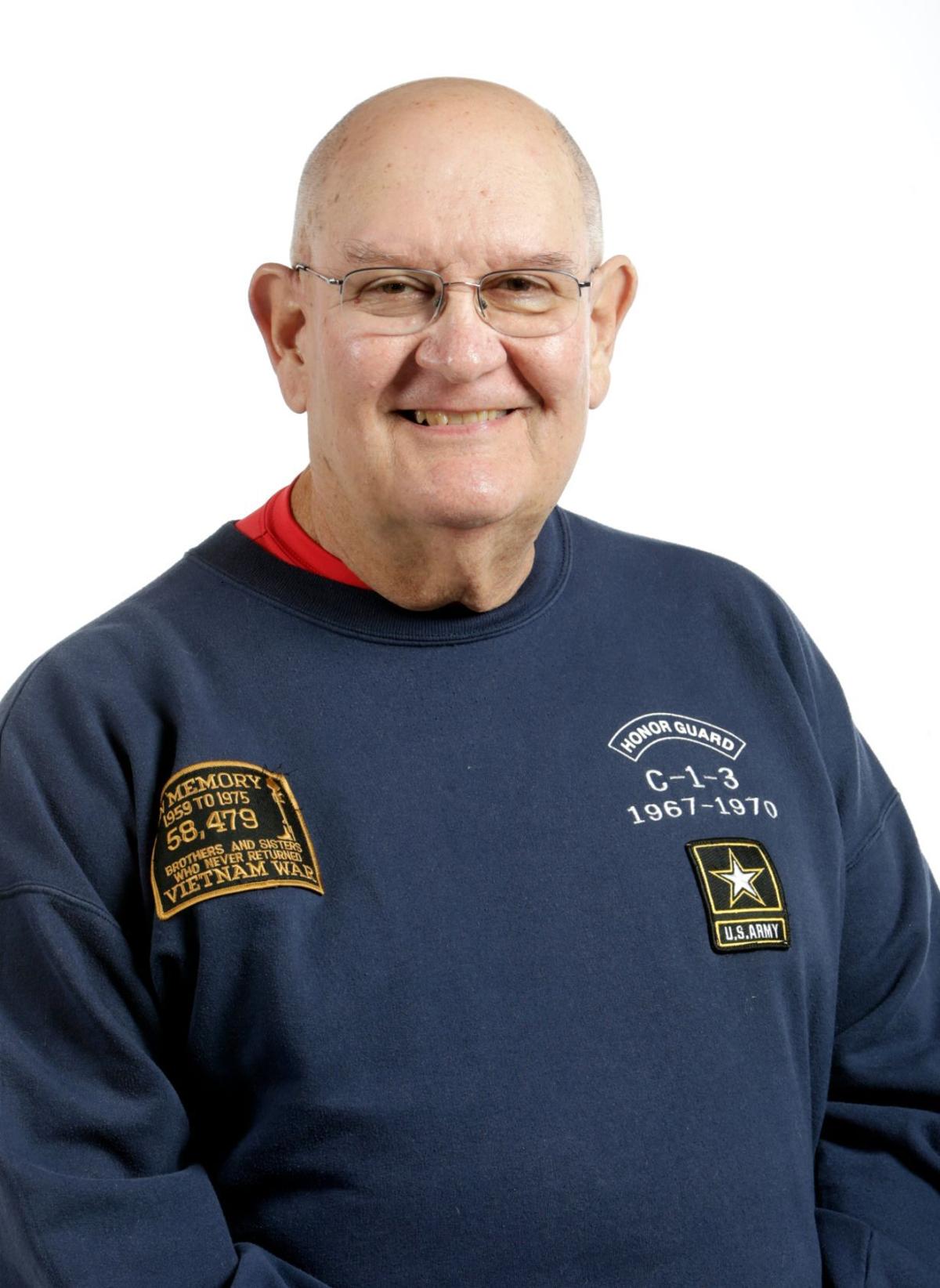 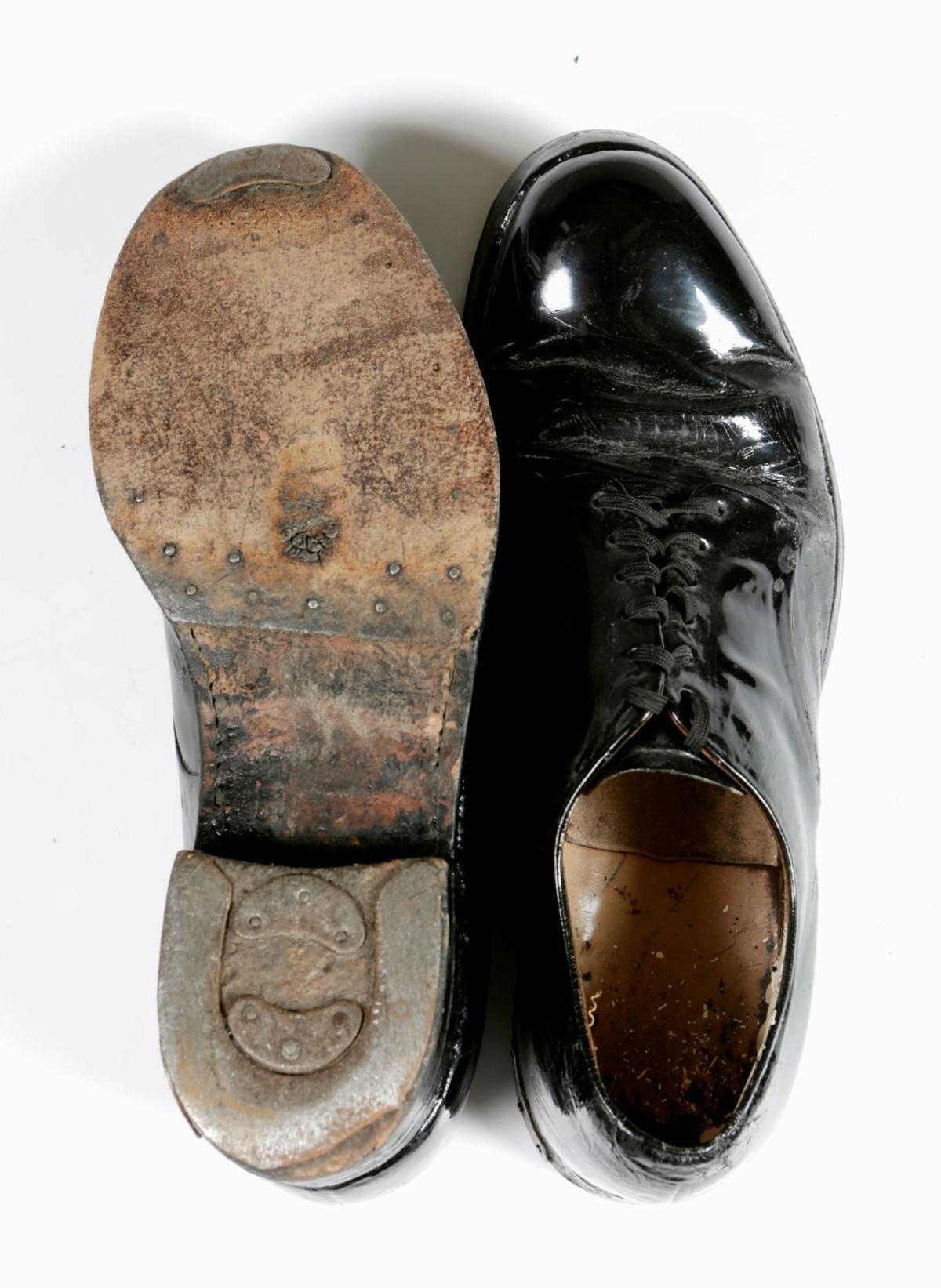 John E. Howard's shoes from his time in the Secret Service.

John E. Howard was in the U.S. Army from 1967 to 1970, though he never set foot in Vietnam during the war. Nonetheless, he was very familiar with several aspects of the Vietnam War through his service at Arlington National Cemetery in Washington, D.C., as part of the Old Guard — the section of Army dedicated to burial detail. This is part of his Vietnam story. For the entire interview, please go to billingsgazette.com/Vietnam.

Howard graduated from high school in Tampa, Fla., and went to one semester of college. He joined the Army after running out of money.

Howard:"I told my dad the Army would treat an 18-year-old like a man, and boy did I find out that was different."

Howard:"Then, my first sergeant told me that the Army did not want an 18-year-old officer, an 18-year-old lieutenant. So he said, 'We got to find some place for you." Apparently, an opening had come up, and I was told to volunteer for it with the 'Old Guard.' I had no idea what that was."

Gazette: What is the Old Guard?

Howard:"It's the Army's honor guard at Arlington National Cemetery. I said, 'Boy, is that going to be a gravy job. Just sit back and do a few ceremonies and wow.' Turns out it was the farthest thing from the truth. Six days a week, you were up at 5 a.m. to 5 p.m., fully dressed up in ceremonial uniforms in the heat. It became so warm that you would sweat through your clothes, and your clothes would develop a white patina. Of course, the next morning, you had fresh clothes on. Turned out, it was very expensive. You had to buy two brand new sets of boots, you had to buy two brand new low-quarter shoes and have them modified in special ways so that you had horseshoe plates on and you wore those constantly. The boots were for training or PT, and the low- quarter shoes for ceremonies. Plus, you had to buy at least five sets of fatigue uniforms because you wore a new uniform every day. You had to either press it yourself or have it professionally pressed. That all involves money when you're only making $79 a month. Plus you had a certain cadre of non-commissioned officers. They were very, very professional. This was the old Army, where it wasn't unusual to have a man with 20 years in but he was only a private first-class because he'd been up and down the ranks so many times. But, he was so good a soldier even though he no doubt had a drinking problem. So, we had those guys with us. One of the hardest things was the wear and tear on one's body when you had to pick up 10 to 15 coffins a day. The Vietnam coffins you needed eight people to lift. For some reason, the guys coming back from Vietnam were buried in lead-lined caskets. We never figured out the reason why.

"We also had to do a lot of funerals where you might have six guys buried in two coffins. You had the families of the six guys or eight guys, nine guys. It was extremely sad, but you could not let that show. You had to be totally professional at all times. Part of the physical problems was for example, carrying a coffin to the lowering device: You're balancing on two-by-fours that have been thrown down, with steel plates. We had a sister company drop two coffins and the entire funeral party into a hole at Arlington. But that does happen. The ground gives way on the side because it's very moist anyway. We did cremates. We did children. And, after awhile, you became, you might say, bitter. Emotionally, you were drained. You had no way of relief. We had no recreation whatsoever. We had one movie theater on base, and it showed the same movie all week. No swimming pool, no gym, nothing to do except sit around the barracks and drink a soda and polish your shoes and polish your brass. It was very disciplined.

"You couldn't do anything that an ordinary soldier might, such as go out on the town. Everybody knew from your haircut and where you're from and who you were. So, basically, you stayed on base. Myself, I used to do long walks through the cemetery. I got to know the cemetery quite well. In December of 1968, I worked the funeral of my father. We buried him Christmas Eve of 1968. He died of World War II injuries, according to the VA. So that was real rough, to say the least. A heck of a way to spend Christmas Day.

"But we got to see quite a lot. One of the things, in June of 1968, I just made acting buck sergeant. I was given a detail at the back lawn, or the east lawn of the Custis-Lee Mansion, which overlooks the Kennedy gravesite. We got to the site at 5:30 a.m., in full dress uniform for Bobby Kennedy's funeral. Our job was to prevent any photographers from getting in and looking down to the Kennedy grave site. To keep people away, too. The cemetery at that time, was an open cemetery. Anybody could drive in. We did that all day. They did not bury him until 10:30 at night, delays from the train coming down from New York and then they had services in D.C. And, then they had a long parade coming into the cemetery. It was a very long day. Periodically, we would have a six-passenger or a 20-passenger bus to pick us up. They had no seats in them, so we had to stand. They would take us to the maintenance yard and then they took us to the south side of the cemetery, not far from (Gen. Jack) Pershing's grave, and we were permitted to take our coats off and drape them over headstones and we had C-rations for our lunch and supper. One thing that was nice was that they gave us ice-cold Cokes. Nothing's ever tasted that good. But that was a long day, and you're constantly on your feet, constantly on guard, constantly having to look your best. Because if you didn't, you would have somebody talk to you later and you did not want to have that conversation.

Gazette: You had your own company barber. How did you have to look? I want to hear about the shoes and the uniform.

Howard: You were always having to be top-notch. First of all, no facial hair whatsoever. No tattoos. Generally, if you were left-handed, and you fired your weapon left-handed, they sent you to Vietnam. That was an unwritten rule. They wanted everyone right-handed. Each company had its own barber. They'd draft some guy who was a barber in real life, and they'd send him to basic training and they'd send him to our unit. He wouldn't be classified as infantry, he'd be classified as garrison. He cut hair all day. We had our own barber chair. He got tipped a whopping 25 cents for every haircut. We had to get a haircut every Monday and Thursday or Tuesday and Friday, no exceptions. You shaved at night and you shaved in the morning. You shaved your ears. You didn't want any peach fuzz or stray hairs up there. You shaved down onto your chest because you didn't want any of this hair sticking out. You also shaved down on your back as far as you could reach because you did not want any stray hairs showing. Everything was very, very well done as far as your uniforms go. We had our own steam presses. I had never steam pressed anything in my life, but you learned real quick. Everybody had their own iron because you had to iron your T-shirt, the front end of the T-shirt that showed. Don't you dare have a grody T-shirt. You'd be sent out. A lot of people didn't like this pettiness. And it was pettiness to the most extreme. They'd go to Vietnam. They'd sign the papers, and say, 'I've had enough of this.' And eight to 10 weeks later, we we're doing their funeral. That hits you right between the eyes. Here's a guy who used to be your bunkmate and all of a sudden, he's being buried. He's really dead. Dead is dead. And the finality of it all hits you. So you learn real quick to do what the non-commissioned officers told you to do, and you had better do it 101 percent."

Gazette: Did you feel relieved that you didn't have to go to Vietnam, or that you were going this route?

Howard:"To my dying day, I will always regret not going to Vietnam. But, you got to understand we lost more than 58,000 guys and six women. The futility of war crept in. You were burying these guys and what did they die for? Day after day after day. Also, the multiple funerals, where you buried six guys in two coffins, or eight guys in three coffins."

Gazette: I think I get what you're saying, and don't mean to be dense or graphic, but that's because that was all there was to bury of them?

Howard: "Exactly. Yes. It was either a helicopter had been hit by a missile or exploded on the ground and burned. Or, they were an armored personnel carrier that got hit by multiple rocket propelled grenades and they were all roasted alive. So, when grave registration would go in, they would find the dog tags and the bones and skulls, and there was no DNA, of course, at that time. They were simply put in body bags. We had six guys, six dog tags and six skulls, and we'll bury them. The same way we helped the Navy with the Oriskany. They had a fire aboard Oriskany and I think they had four coffins and 28 guys -- something like that. It was phenomenal the horrible way for these poor guys to have died. It just kind of destroyed you emotionally, plus the crazy things are after the funeral detail, after you passed the physical requirements, you had to walk a certain way. We got rid of a lot of people because they didn't know how to do the walk.

Gazette: What is that walk?

Howard:"If you ever see the guy that does the tomb guard, when he walks, he doesn't move his shoulders at all. He walks like you're carrying a pan of water. That's how we trained. You'd go back and forth and back and forth with a small cake pan filled with water. It's called "the slide and glide" and some guys just bounce. You can't do that. Boom, you're gone. So, after all that was done, then your final initiation was that you had to spend a night in a training coffin in the basement, which was rather unnerving.

John Howard was a sergeant with the U.S. Secret Service’s Uniformed Division and served at the White House. He was on duty the day that President Nixon resigned, 40 years ago Friday, on Aug. 8, 1974.

John E. Howard's shoes from his time in the Secret Service.